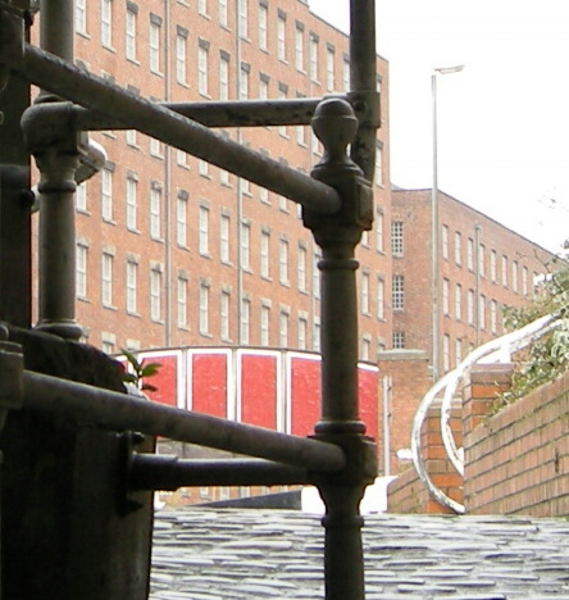 The bridge in context: Murray's Mill on the left, Lock No. 82 in foreground, generic 'retail park' on right

This small cast iron arch footbridge is unusual for the height of its cast iron side panels. It crosses the Rochdale Canal north of Great Ancoats Street, and linked the north and south sides of Henry Street. R. and J. Rankin of Liverpool produced the castings. The age has not been established, but a footbridge is shown here on the 1849 OS map and on Bancks's 1831 map. The 1849 map also shows a very small brass foundry sharing a narrow strip of land with the northern abutment of the bridge.

The reason for the bridge being here is no longer obvious, but presumably someone with influence insisted upon it being provided when the Rochdale Canal severed Henry Street in 1803/1804, even though there is a road bridge nearby taking Great Ancoats Street over the canal.

Neither is the reason for the high side panels obvious today, but it is apparent from old photographs and maps that they were intended to keep intruders out of the premises on the northern bank of the canal.

A 1961 photo here[1] shows that a public toilet had been added at the northern abutment. In the left background can be seen the former Allum Street Foundry. Impressive 1962 photo here.