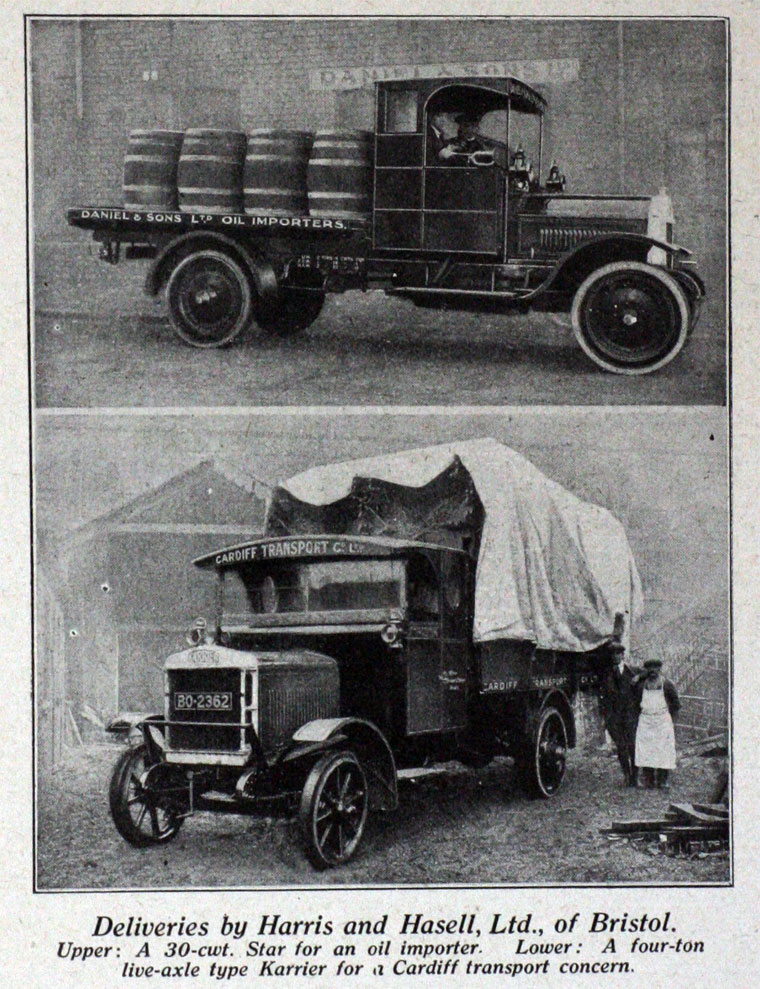 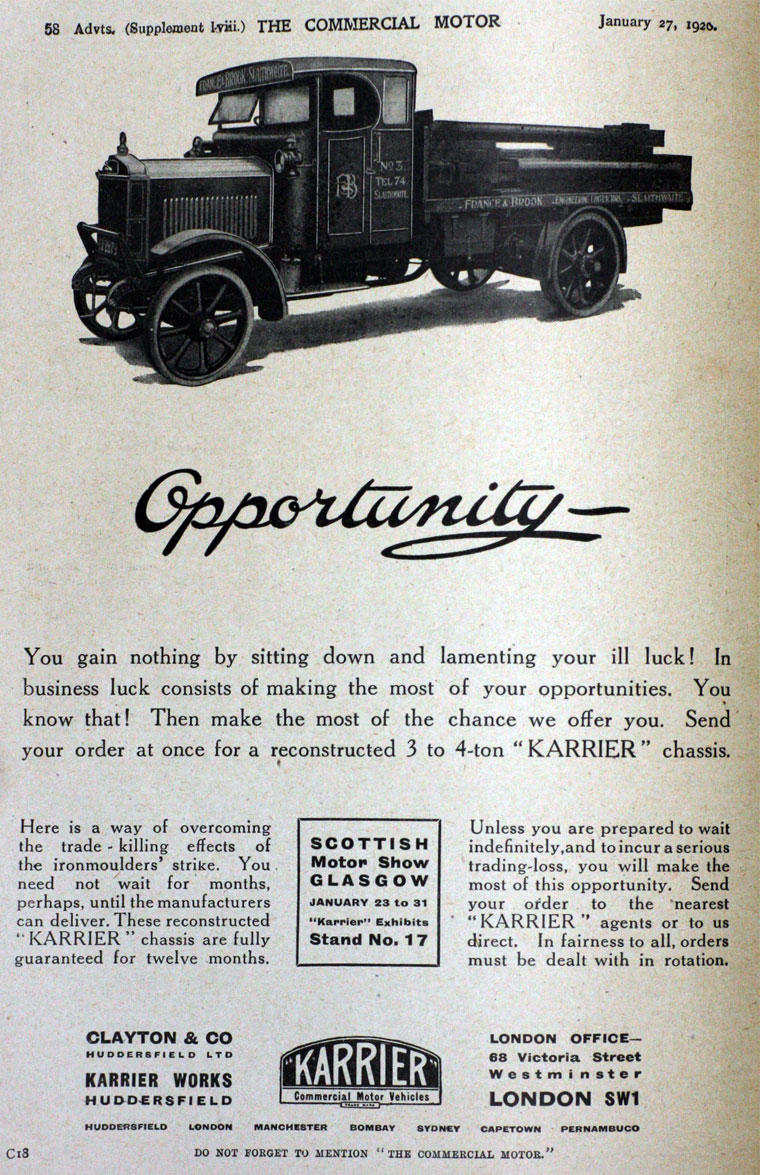 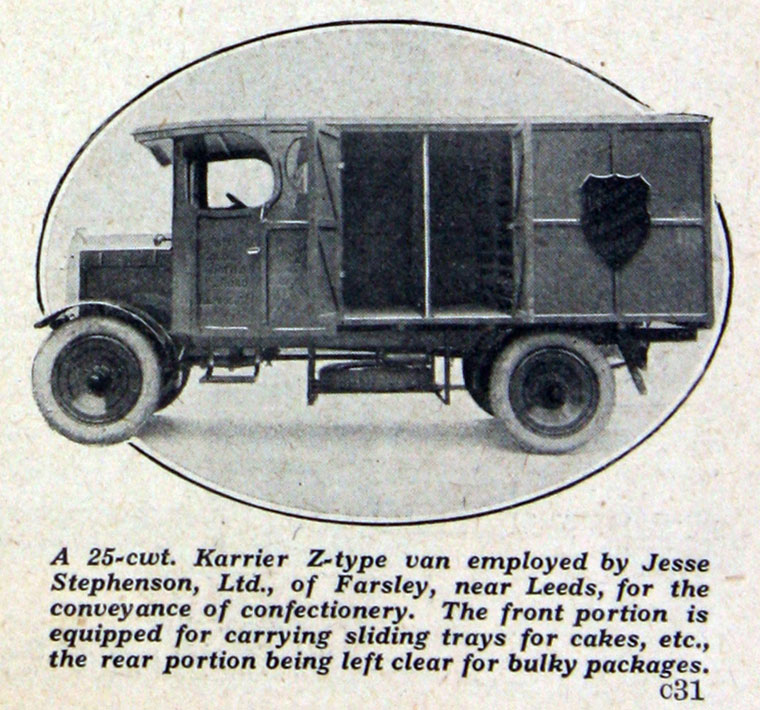 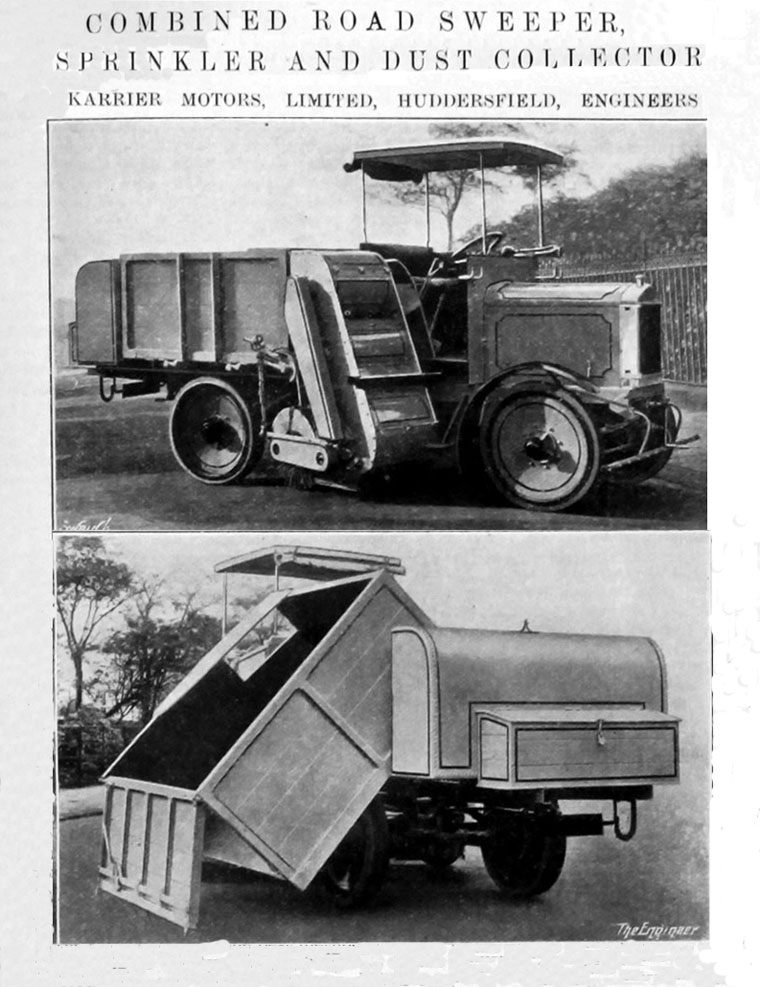 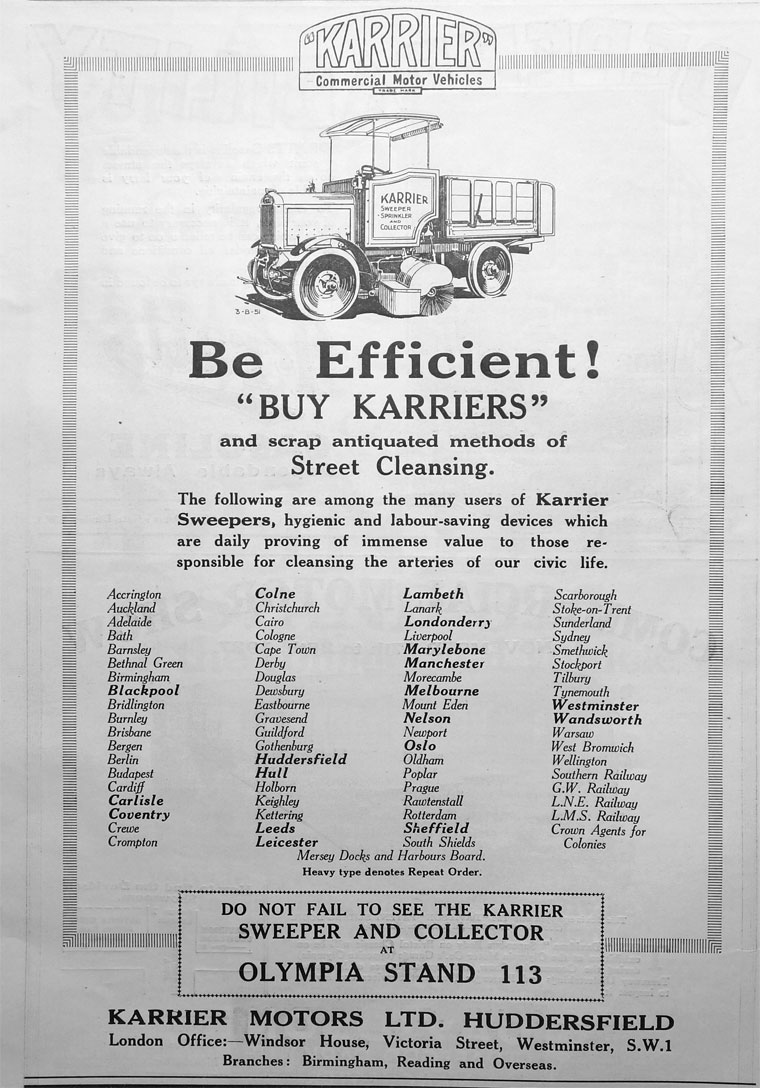 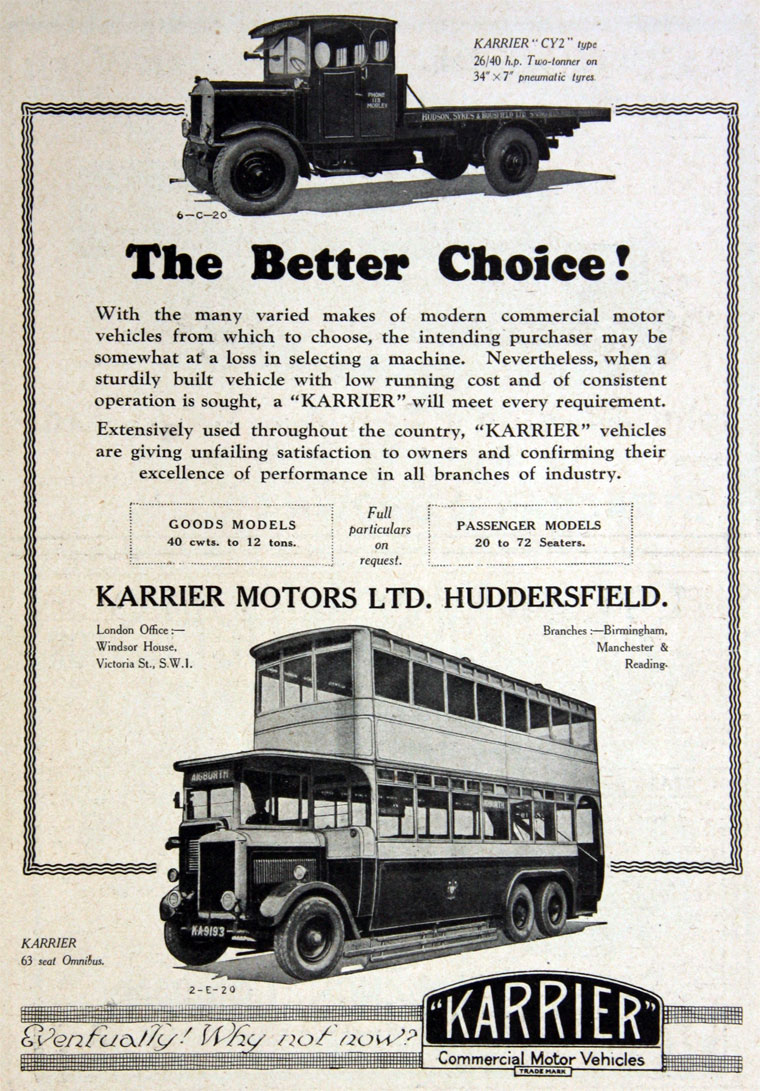 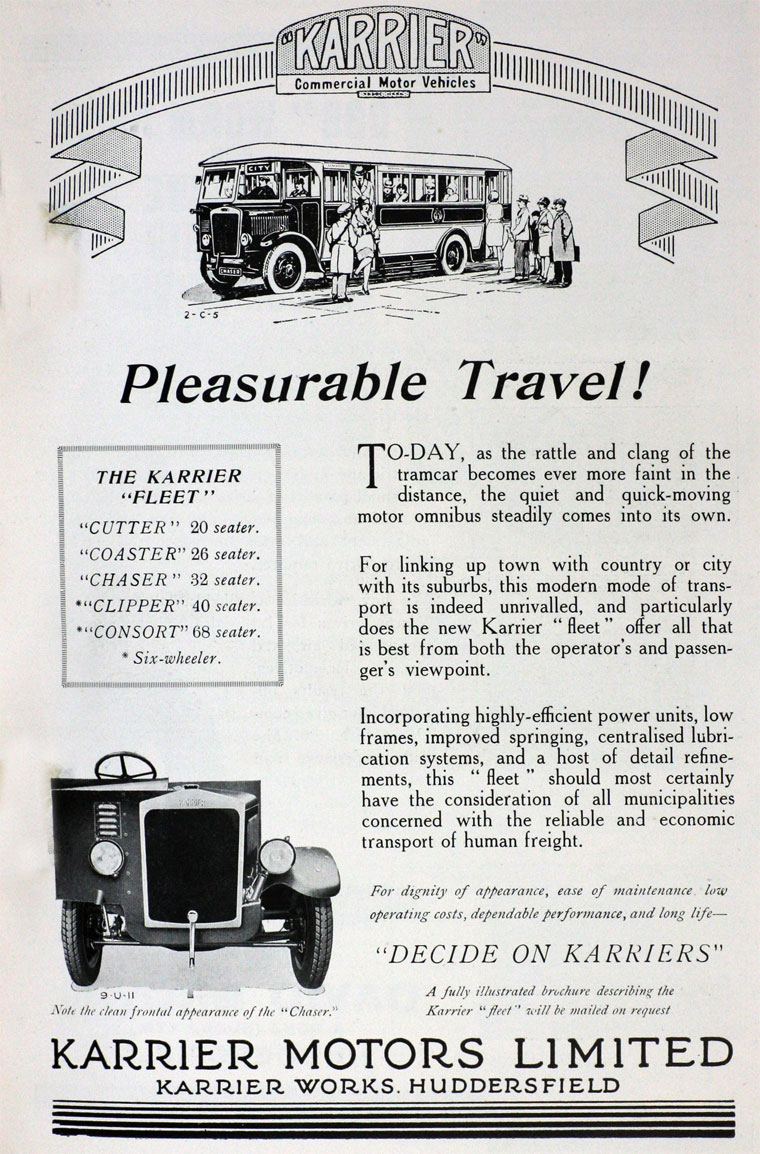 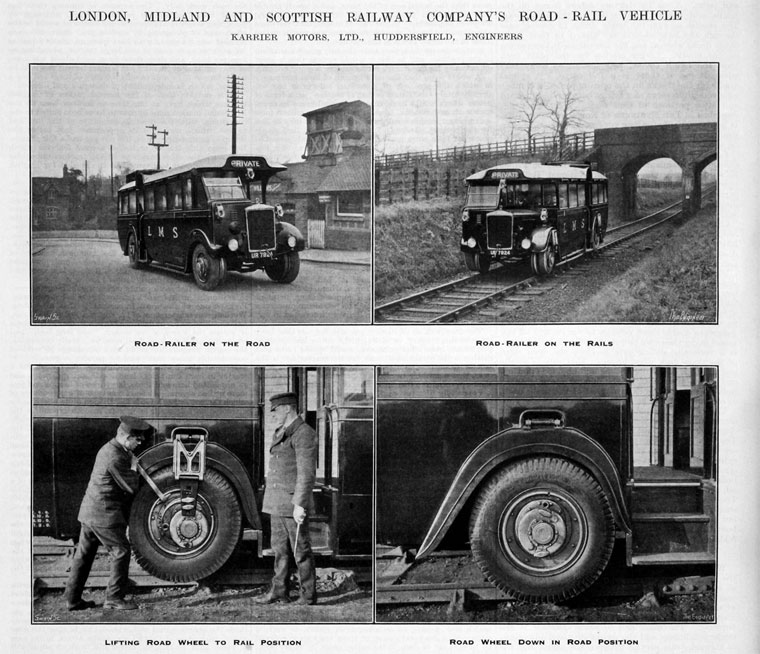 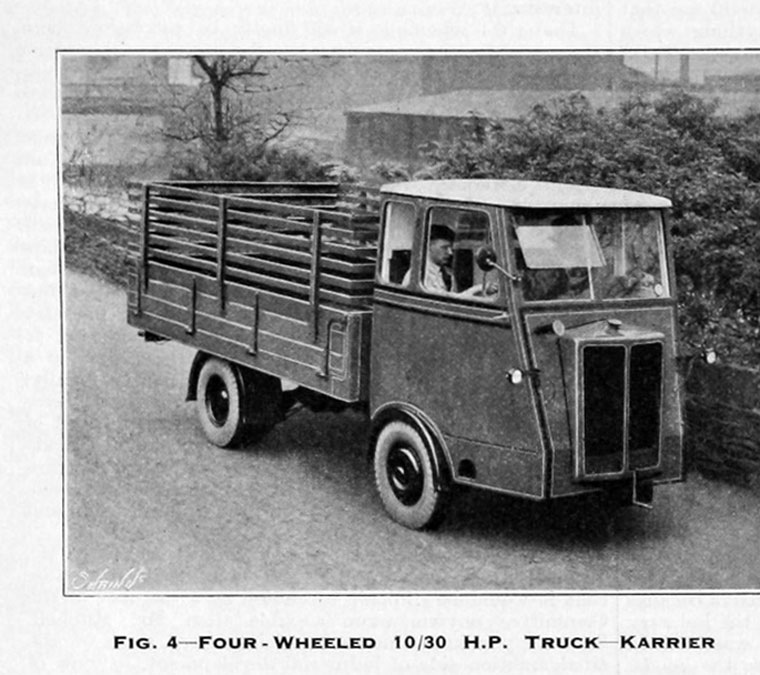 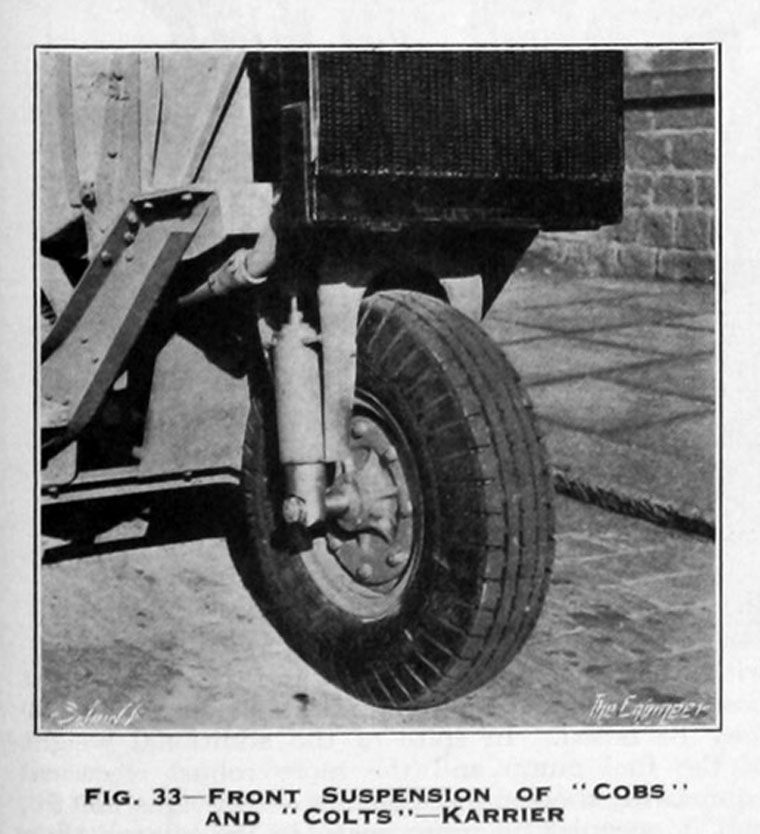 1933. Front Suspension of Cobs and Colts. 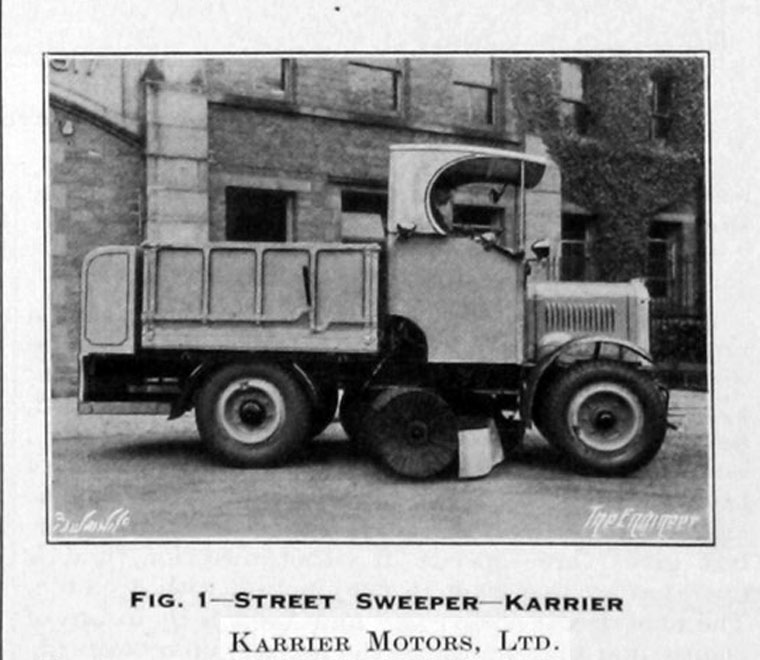 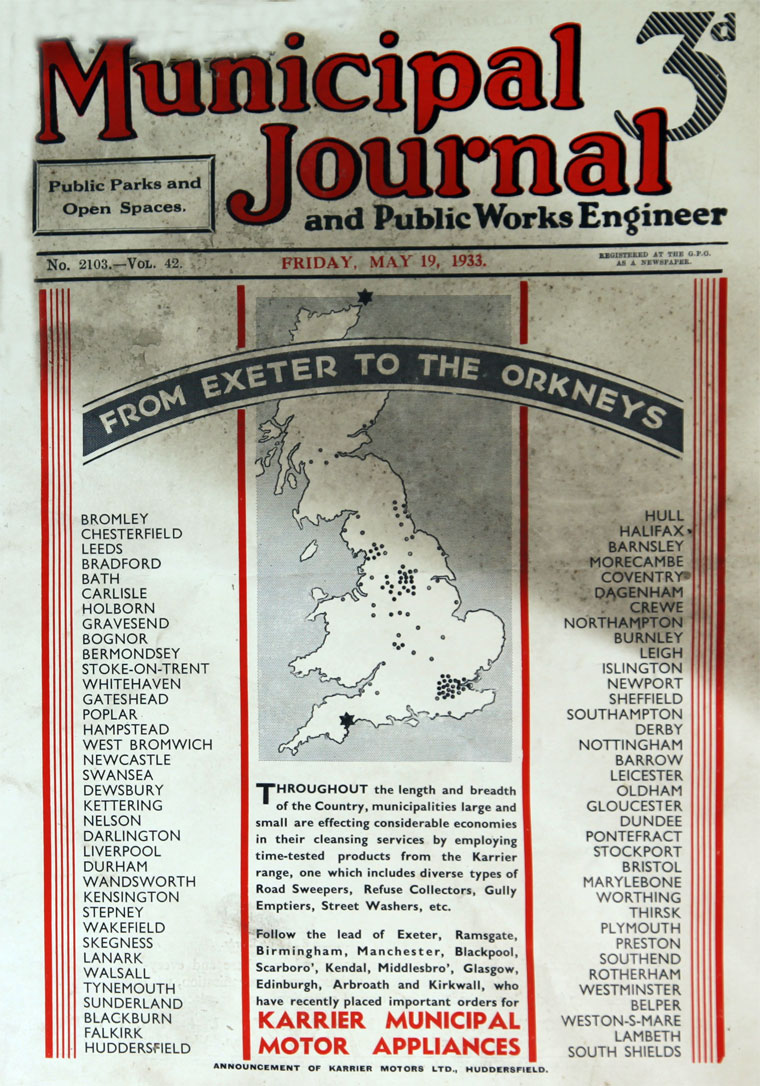 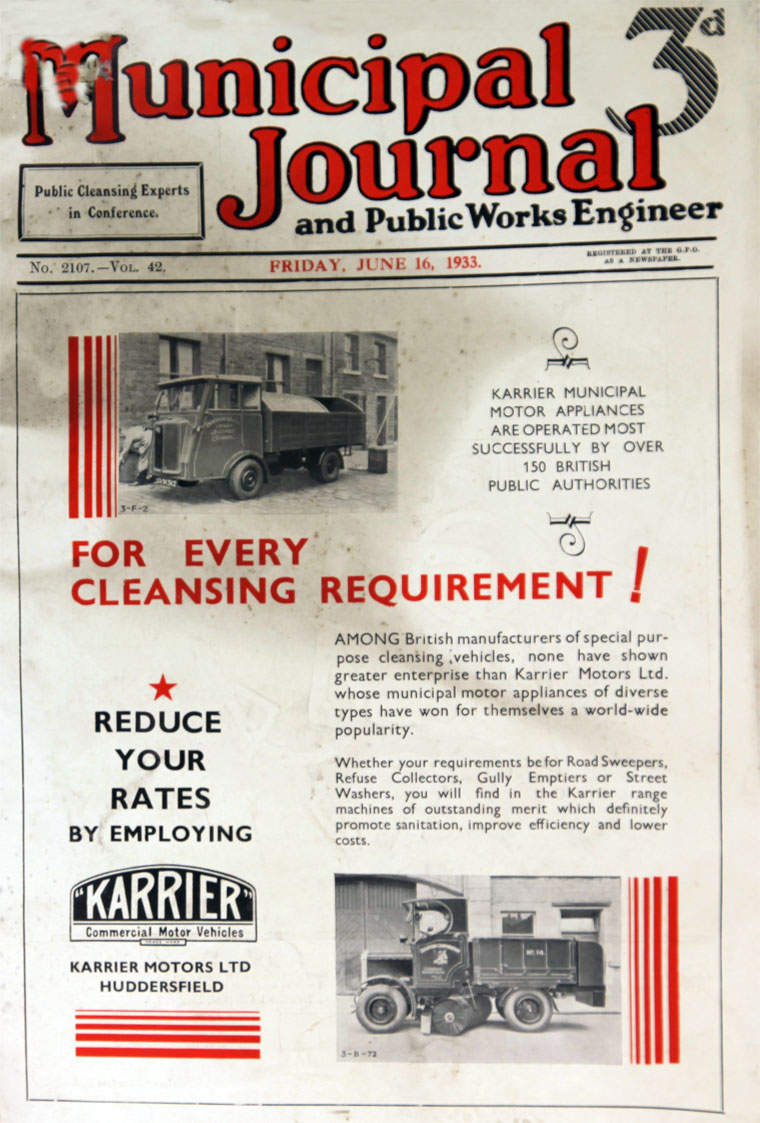 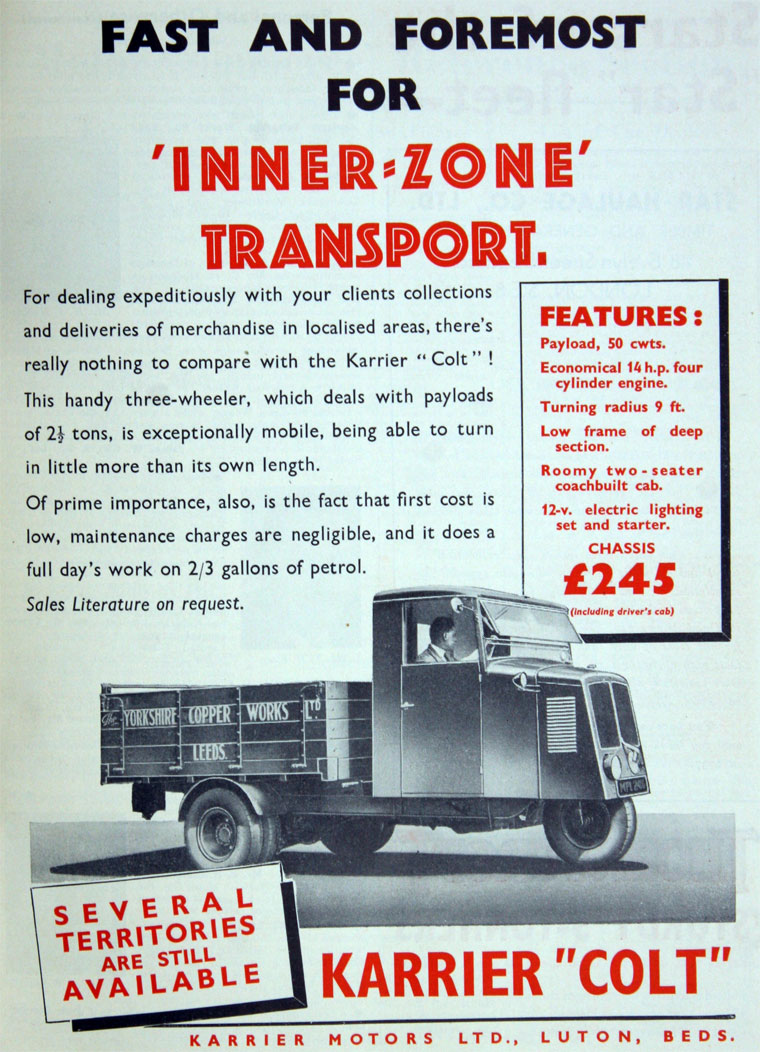 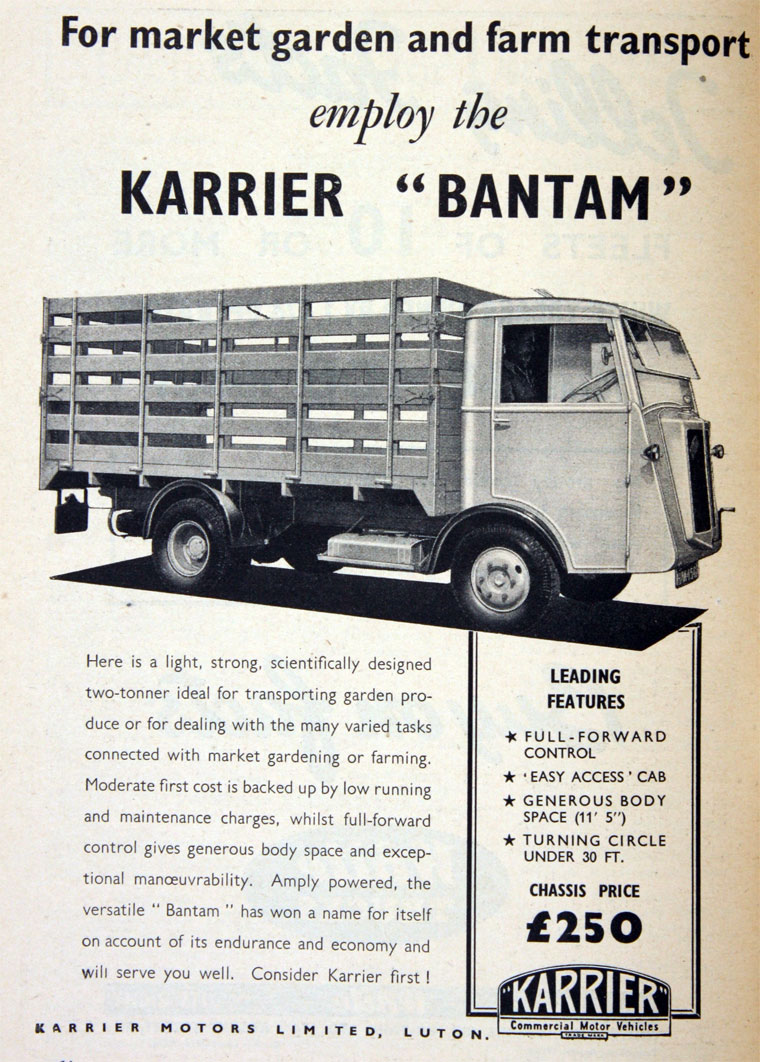 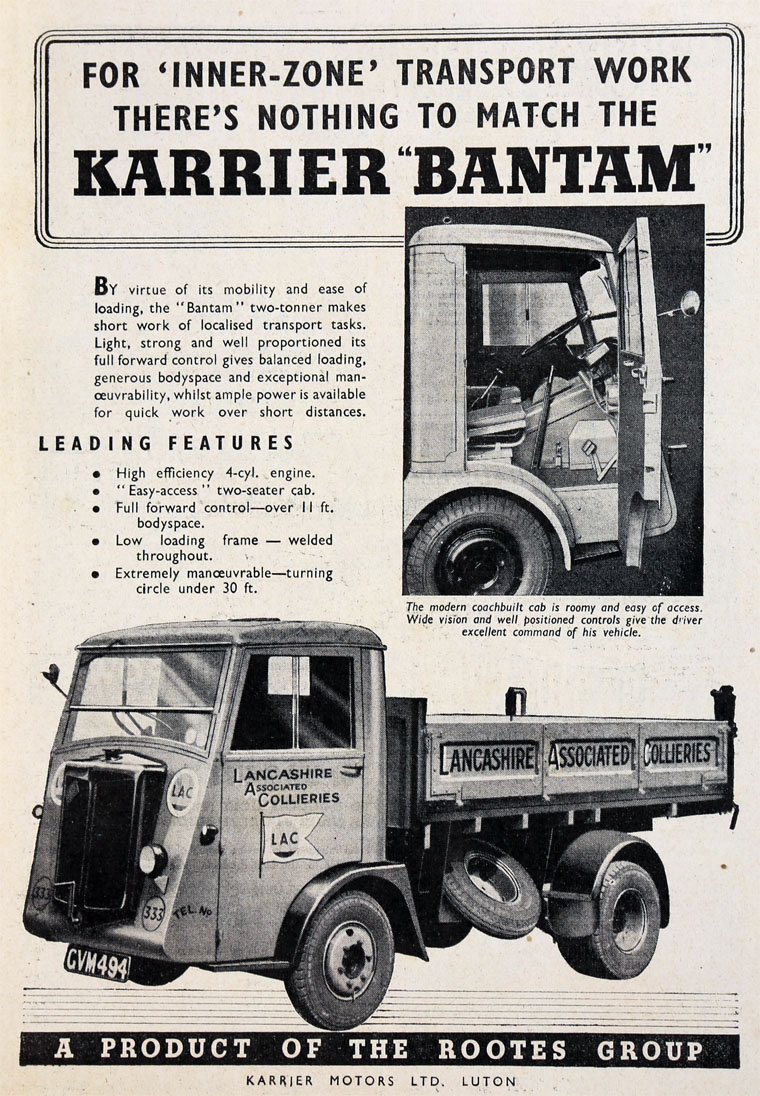 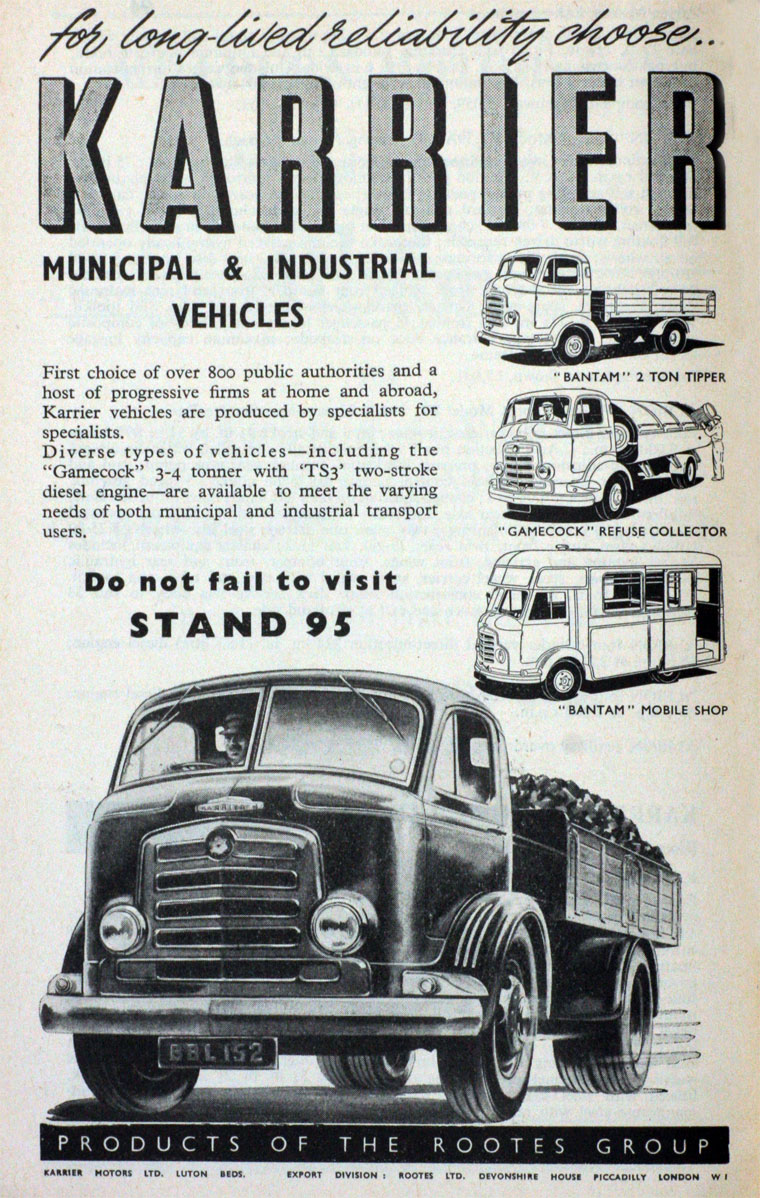 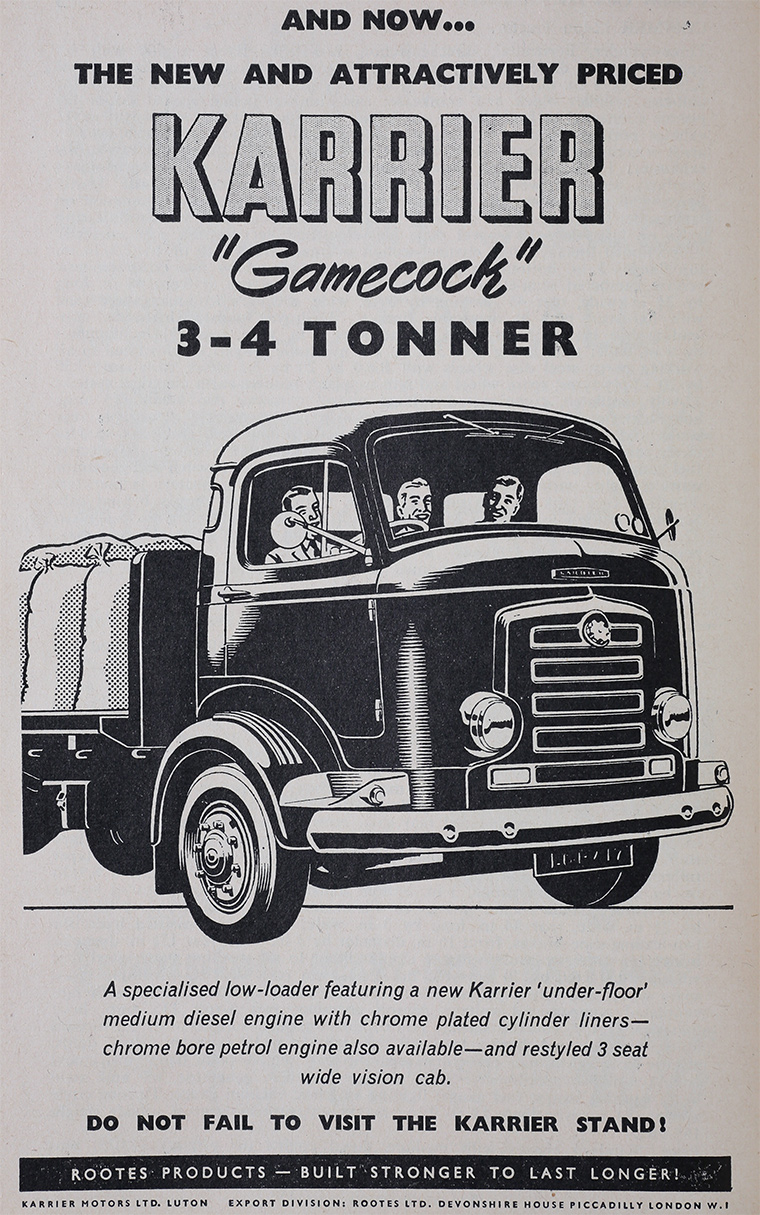 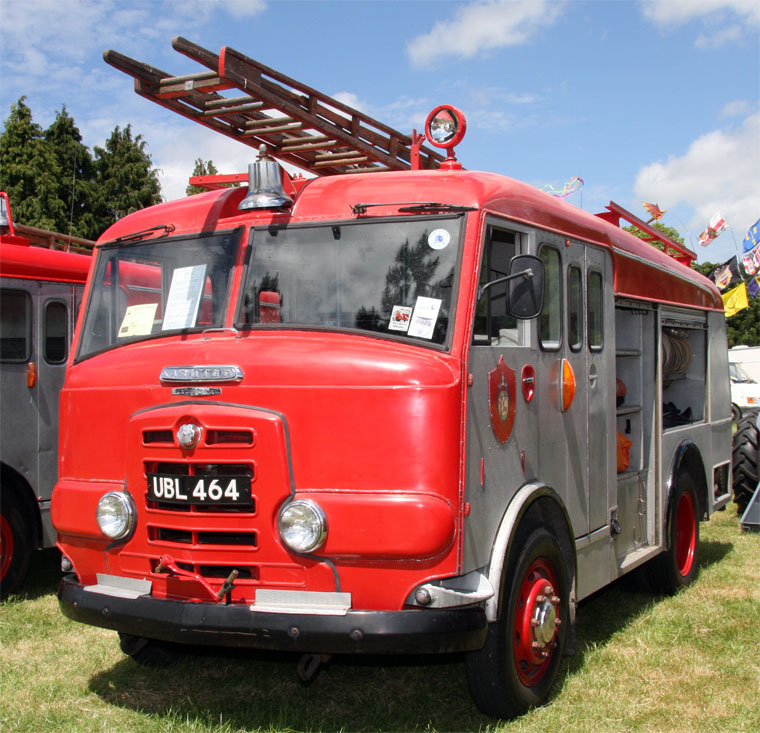 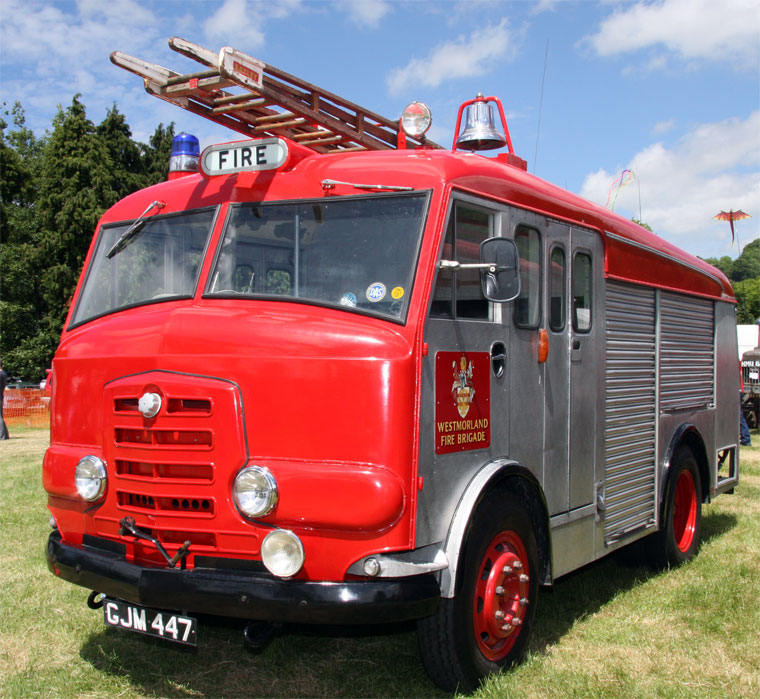 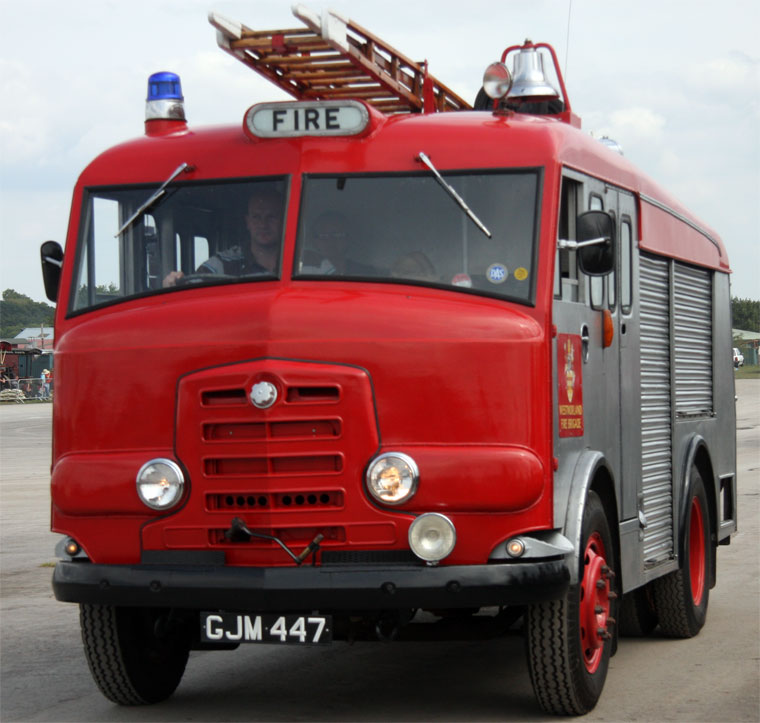 In 1929 Karrier started production of the "Colt" three-wheeler as a dustcart chassis for Huddersfield Corporation.

In 1930 this was developed into the "Cob" tractor to haul road trailers for the London, Midland and Scottish Railway. The "Cob" was similar to the Scammell "Mechanical Horse".

1931 In partnership with the London, Midland and Scottish Railway they developed a three-wheeler to replace the horse. This was based on a Jowett 7hp engine and was produced until 1938.

1934 Financial difficulties and bought by Humber

1934 Purchased by Rootes Securities. [2]; moved production to Luton (the bus business was moved to Moorfield Road, Wolverhampton where the Rootes' owned Sunbeam business was based); closed the Huddersfield operation.

In the mid-1930s the "Cob" range was supplemented by the four-wheel "Bantam".

Postwar: the Sunbeam and Karrier trolleybus operations were sold to J. Brockhouse and Co and soon after these were sold to Guy Motors.

1950 Introduced the Gamecock with underfloor engine and a steel cab identical to the Commer.

In the late 1950s and 1960s some Karrier vehicles were fitted with the inconic Rootes two-stroke opposed piston diesel engine, see Commer. Other engines used in this period include Humber Hawk petrol engines (L Heand and OHC) and Perkins Diesels.

1973 The company passed to Chrysler and was later merged with Dodge Brothers.

They made Economist buses and these were for sale in Yorkshire by Stagg and Robinson.

1928 They produced the three-axle E6 trolleybus

1932 Karrier's Ro-Railer was a hybrid single decker bus capable of running on both road and rail. It was introduced in 1932 and tested by the London, Midland and Scottish Railway but it was not a success

After WWII they produced a 14-seat chassis with a four-cylinder Commer engine and in 1960 this was replaced by a Standard engine.