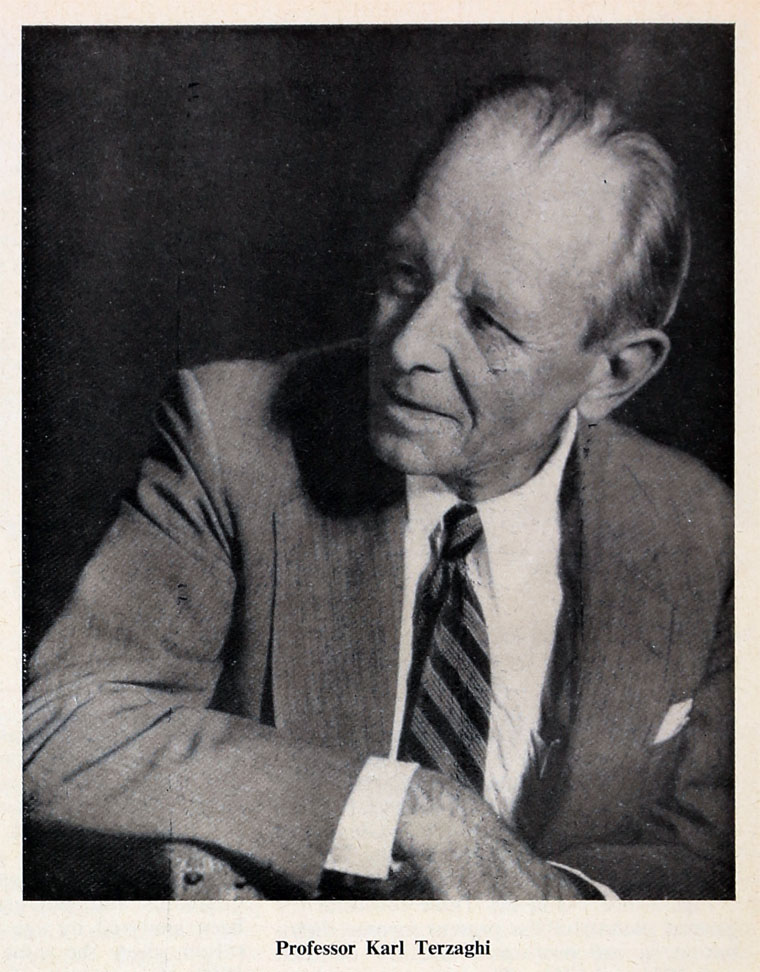 "THAT great engineer, Karl Terzaghi, died on October 20 at Winchester, Massachusetts, in his eighty-first year. The names of famous engineers are often associated with their more conspicuous works, such as that of James Watt with the development of the steam engine, and Sir Benjamin Baker with the Forth Bridge, but there are others who are remembered for their contributions to the natural philosophy on which engineering science is based, such as Navier and Rankine. The work of such men has influenced the whole of engineering practice in future generations, and Terzaghi will be numbered amongst them.

His achievement was no less than the creation of a new science of engineering geology, based on a quantitative approach which enabled calculation to replace empirical methods in the whole field of foundation engineering and elsewhere. Already his ideas have had a profound effect on practice, but their impulse is still far from exhausted, and in no branch of civil engineering is research more active at the present time than in soil mechanic, rocks mechanics, and on the border-line of engineering geology.

Terzaghi was born on October 2, 1883, in Prague, which was then the capital of the Austrian province of Bohemia. He came of an army family, and his father was at the time commanding an infantry battalion in that town. He himself broke away from the family tradition and entered the Technische HQchschule at Graz in 1900, where be studied mechanical engineering, and graduated in 1904.

As so often with men of genius, he was by intuition attracted to those subjects which would eventually contribute to his achievement, and although hi.s formal education gave him a thorough grounding in mathematics, he was already a keen geologist, and indeed during the year of military service which followed graduation, he devoted his spare time to translating Geikie's Outlines of Field Geology into German. Those who knew him later in life will not be surprised to learn that as an undergraduate his interests were wide and his spirits high; indeed, he seems to have excelled not only in literature, but also as a mountaineer and as a duellist.

On completing his military service he joined a firm of civil engineering contractors, with whom he spent six years. It was during this period that he had the opportunity of studying the failure of a dam by piping, an incident which undoubtedly greatly influenced the development of his thinking. During 1912 and 1914 he visited the United States to collect data on the behaviour of dams.

On the outbreak of war in 1914 he joined the Austrian Air Force, and worked in a research unit under von Karman and von Mises. In 1916 he was appointed as a lecturer to the Imperial School of Engineers in Istanbul, and from then on devoted himself entirely to research into the subject now known as soil mechanics.

In 1919 he joined the staff of Robert College, Istanbul, where he remained until 1925, in which year he published Erdbaumechanik auf Bodenphysikalischer Grundlage, a work which is now regarded as a classic. In the same year he accepted a lectureship at the Massachusetts Institute of Technology, where he remained until 1929, when he returned to Europe as a professor at the Technical University of Vienna.

In 1938 he returned to the 'United States as a member of the staff of Harvard University, and established his home at Winchester. In 1955 he retired from the teaching staff of Harvard University with the title of professor emeritus of civil engineering. Terzaghi's life and his influence on engineering can be regarded from three aspects. First of all, his laboratory work, for his contributions to the theory of the subject were of the greatest importance. He was a competent mathematician and had a gift for experiment. Secondly, as a consultant he built up over the years an immense fund of experience, and in this branch of his work his natural gift for geological observation was of the very greatest value. Lastly, his outstanding intelligence, his strength of character and his enthusiasm, deeply impressed all those who met him, and attracted many people to the study of the subject which he had made his own."