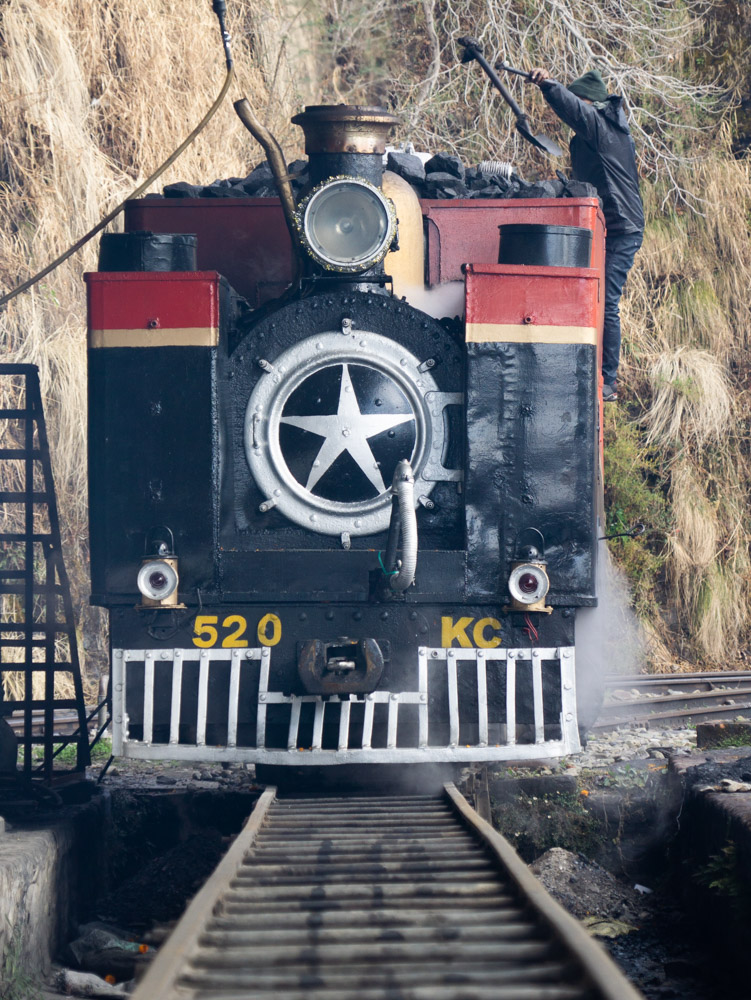 The 96.54-km-long narrow gauge track has 102 operational tunnels that constitute about 8 per cent of the total length of the route. All the tunnels were built between 1900 and 1903. L. Edwards, Executive Engineer of Dharampur division, completed work on as many as 30 tunnels. Railway chronicles say workers used large mirrors and acetylene gas to illuminate the tunnels. The longest tunnel on this track is the Barog tunnel (no 33).

1898 June 29th. Contract signed by the Secretary of State and the Delhi-Ambala-Kalka Railway Co for the construction of a 2ft gauge line from Kalka to Simla.

1899 April. 'Mr. Harington, the engineer-in-chief of the Simla-Kalka Railway, will arrive in India about the middle of this month. He will make arrangements for the location of the line and the engagement of staff, and will then return to England to report to his board. He will go out again in October, when the work of construction will be begun.'[2]

1899 November. 'The Board has appointed Mr H. S. Harington as agent and chief engineer of the line , who has made a report suggesting a modification by shortening the route of the railway as laid down by the Government of India, and upon which instructions have been issued. In the meantime arrangements have been made for the supply of material, and 25 miles of permanent way have already been sent out.'[3]

1899 December. '... a reconnaissance undertaken in order to ascertain the most promising route from Kalka to Simla. No attempt has yet been made to mark out the exact alignment....it is anticipated that the work of construction will commence next April.....The following will be the staff of the railway;- Mr. Harington, Chief Engineer; Messrs Edwards and Alexander, Executive Engineers; Lieutenants Turner, R.E., Gracey R.E., and Mr. Amesbury, Assistant Engineers.'[4]

1901 November 15th. Contract amended to increase gauge to 2 ft 6in. The portion of the line already built had to change gauge.

1901 July. 'Now that the question of gauge is settled, the building of the Simla-Kalka Railway will be pushed on with rapidity, says the Bombay Gazette. There will, in all, be 25,000 ft. of tunnels on this line— there being 80 tunnels, the shortest 80 ft. and the longest 3,700 ft. long. Already tunnels have been pierced completely through, and 50 others are under construction, over 7,000 ft. of headings having been completed, and progress is going on at the rate of 230 ft. per week between Kalka and Jutogh. Construction trains should be running to Kamarhatti below Dagshai in February next, i.e. one-third of the distance from Kalka to Simla. The work is being directed by Mr. Harington, engineer-in-chief. It is divided into seven charges, each under an executive engineer.'[5]

1901 October. 'The report of the first annual inspection of the Kalka-Simla Railway has been made public. The inspection was made by Mr. W. J. Weightman, Government Inspector, between Aug. 5 and 11. It is noted that the capital raised under the branch line terms without a guarantee was 600,000/., and the estimate of the cost of the line proper was 75,37,950 rs - The agent still hopes to keep within that figure. Up to June 30 the expenditure was about 16.75 lacs, and nearly one-fourth of the work has been done. Mr. Weightman remarks that there will undoubtedly be a considerable excess under the head of “tunnels,“ as, although they are being built at less than the estimated rates, the total length has been increased from 750 to 24,769 feet. There should savings under “bridgework and buildings” and perhaps a slight saving “earthwork ” ; but the amount under the head of general charges ” will be exceeded. It is, however, too soon to state, with any degree of certainty, whether the estimate is likely to prove sufficient or not. The contract date for completion is Dec. 31, 1903. Mr. Harington, Agent and Chief Engineer of the line, hopes to be ready for rails up to mile 10 by Dec. 1901 ; to be through Koti Tunnel by January 1902 ; up to Barogn Tunnel by Feb. 1902; and to open for goods traffic throughout in March 1903, and for passengers in October 1903- Weightman remarks: It is thought that in fixing these dates Mr. Harington has been much too sanguine. In a line of this character a very large margin must be allowed for unforeseen contingencies, and it is believed that the spring of 1904 is the earliest date by which the line is likely to be opened throughout to Simla. The quality of the work is excellent and shows careful supervision.'[6]

1902 November. 'Mr. F. J. Spring, director of railway construction, was to inspect the Kalka-Simla Railway on Nov. 13, accompanied by Mr. H. S. Harington, engineer-in-chief of the line. From Solon, says the Pioneer, they will trolly through to Kalka, excepting only the two long tunnels (Barogh and the old 7th mile landslip), through which they will walk. This goes to show how rapidly the construction of the line is advancing. The piercing of the Tara Devi tunnel on the Simla-Kalka Railway was completed within short time of the accomplishment of the Barogh boring, the headings having met on the 24th. The headings of the Barogh tunnel met on Oct. 22, and the workmen can now walk right through the hill, a distance of 3,770 feet.'[7]

1903 April. 'The Hon. Mr. Arundel, Public Works member, was also to leave on the 26th and proceed to Kalka, where Mr. Harington, engineer-in-chief of the Kalka-Simla Railway, would meet him and show him parts of the finished line.'[8]

1904 September. 'Mr. Harington, manager and engineer-in-chief of the Kalka-Simla Railway, will retire from the service of that line next December and revert to Government employment. He will, however, take two years’ furlough before resuming his post as a chief engineer in the Public Works Department. The board of the Kalka-Simla Railway Company have appointed Mr. James A. Kellie, late of the Bengal and North-Western Railway, to succeed Mr. Harington. Mr. Kellie is due to arrive in Simla in October, and will act as Mr. Harington s deputy until the latter finally leaves the company’s service in December. The line is now practically complete. Mr. Harington has spent five years in seeing the work carried out.'[9]

1904 November 'Mr. Harington made over charge of the Kalka-Simla Railway on Nov 1 to Mr. G. Kellie, late executive engineer on the Bengal and N-W Railway, who has now become agent and chief engineer of the line. Mr. Harington takes combined leave for two years on reverting to the Public Works Department.'[10]

The earliest rail-cars were produced by Drewry Car Co

1934 Rail car #14 introduced and made by Sir W. G. Armstrong Whitworth and Co

'The Making of India: The Untold Story of British Enterprise' by Kartar Lalvani, who has described the civil works as 'little short of a miracle', and observed that in some of the most difficult terrain on the sub-continent, no less than 869 bridges were built in a distance of 60 miles.[11]