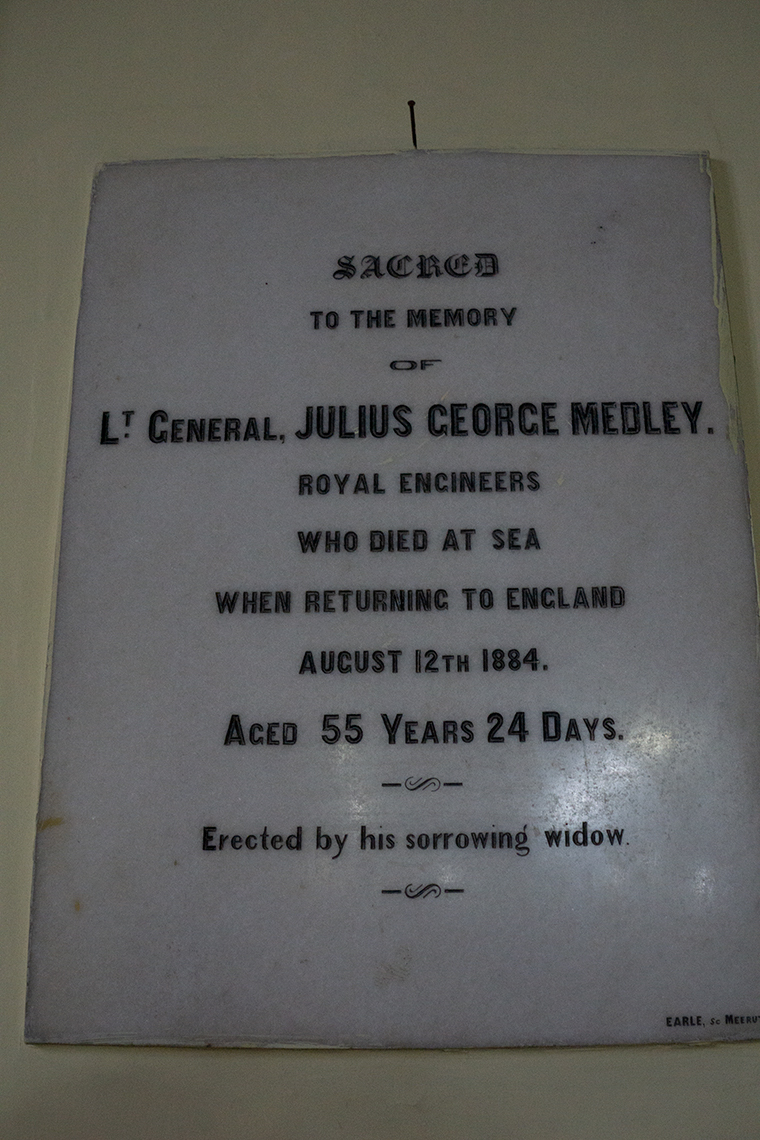 Having chosen an Indian career, he was gazetted on the 11th of June, 1847, and arrived in India on the 12th of March, 1849, joining the Public Works Department as Assistant Engineer in June 1850. In the course of a thirty-five years’ service in the East, General Medley took personal part in many stirring events, which render the story of his career one of more than ordinary interest. Though mainly employed as an officer of the Public Works Department, his official “record” largely embraces military duty and service in the field.

On Medley’s first arrival in India Lord Dalhousie had been a year in office, and the second Sikh war had just resulted in the annexation of the Punjab. In those days India was still reached by a three months’ voyage round the Cape, and its vast provinces had generally to be traversed by ‘palki’. As yet the country was innocent of railways, although the subject of improved communications had seriously occupied the attention of the Government, and within a few years the first tentative contributions were taken to the construction of a system of railways and telegraphs.

It was not till 1853 that the first Indian railway - the line between Bombay and Tanna was opened, and by that time the zeal and energy of O’Shaughnessey had established the main lines of telegraph which proved of such vital importance in the critical period that shortly followed. Nothing could better illustrate the silent but rapid growth of modern institutions in India-and the advancement in civilization which that growth implies-than the eloquent fact that the young engineer who found the country without railways, even in the neighbourhood of its capitals and commercial centres, left it at the close of his career covered with a vast network of communications reaching to its remotest corners. The achievements of the Government during the past thirty years in this field of activity are such as might stir the pride of any nation, and certain events may be pointed to as closely linking General Medley’s name with the history of railway development in India.

During his service as Consulting Engineer for Railways at Lahore, the Punjab Northern Railway has been completed to Peshawar and Kushalgarh; the Indus Valley Railway has been opened, giving the Punjab through connection with the sea at Karachi ; while the construction of the Sibi Railway also comes within the period in question. General Medley was largely instrumental in pushing on all these works. General Medley’s career might be regarded indeed as a notable one, if only for the fact that it synchronises with an important era of railway construction in India. For only a portion of his service, however, was General Medley directly connected with railways.

His war-services alone will give him a distinct position in Indian history for all time. As Field Engineer, he served with the force under Brigadier Chamberlain against the Bozdars, on the lower Derajat frontiers, in 1857. This was a stiff piece of hill-fighting, and hardly was the expedition over when rumours began to find their way to far Dera-Ghazi Khan of the evil deeds which heralded the Mutiny. Private letters and the newspapers from Lahore brought ominous news which was not always believed. "The idea of a general rising," General Medley has written, even among the Poorbeah army, was at that time looked upon as absurd, and the frontier officers at any rate looked with confidence to their splendid regiments, who had fought against men of their own colour and faith during the last eight years.” But the day of terror had dawned, and in the sudden rush of events, General Medley shortly found himself acting as Field Engineer with the army before Delhi.

In a spirited little work entitled "A Year’s Campaigning in India," published in 1858, he has given a graphic account of the events in which he himself took a distinguished part. Some of the incidents of the Delhi siege, as told in this work, are among the most vivid and faithful reminiscences of the time. The historical service which General Medley rendered at Delhi was the reconnoitring of the main breach the night before the assault, and the leading of the first column to the attack on the following morning. He has told the story of the assault simply and modestly. There was a delay, and the advance was made in daylight. “Forming the ladders into a sort of line, we rushed towards the breach, closely followed by the storming party, and in a minute found ourselves on the edge of the ditch. But so terrific was the fire from %he breach and the broken parapet walls, that it was at first impossible to get the ladders down into the ditch, which was necessary to enable us to ascend the masonry escarp below the breach. Man after man was struck down, and the enemy, with yells and curses, kept up a terrific fire, eyen catching up stones from the breach in their fury, and dashing them down, dared us to come on. At this moment I felt a shock, like a blow, un my right arm, which made me stagger, and then I knew I was wounded. The excitement was, however, too great for pain to be felt, and I knew that the bone had escaped, so that it could not much matter, . . . . As soon as I saw my first ladder down I got ,down into the ditch, mounted up the escarp, and scrambled up the breach, followed by the soldiers.” Immediately after the capture of Delhi he was appointed Garrison-Engineer of the Imperial city, but never took up the appointment, as much stern work had yet to be done. He had been severely wounded, but was soon well again, and served with Sir Thomas Seaton’s force in the Doab, being present at the affairs of Khasgunge and Putteatec.

Early in 1858 he joined Outram, and acted as directing Field-Engineer with the army under the Commander-in-Chief during the final siege of Lucknow. Here again, after the capture, General Medley was appointed Garrison-Engineer, and his first work was to clear away the houses round the fort, and, regardless of ownership, to cut three broad streets at angles from the fort and through the heart of the city. These were the days of rapid promotion, if not of lavish decoration. General Medley entered the campaign as a lieutenant, and while below the walls of Lucknow, he was made Captain one day and Brevet-Major the next. Beyond this he added to the medal for the North-West Frontier, the Mutiny medal and two clasps, and the mention of his service in the Delhi and Lucknow despatches. Subsequently, he attained the full rank of Colonel in 1881, and that of Major-General in January 1884.

General Medley held various important civil appointments. He was Deputy Consulting Engineer for Railways at Lahore in 1858-60, then Principal of the Civil Engineering College, Calcutta, and subsequently officiated as Under-Secretary to Government in the Public Works Department. He was Principal of the Roorkee College, from 1863 to 1871, and his name will long be honourably remembered in connection with that institution. Here he compiled an excellent “Manual of Engineering” for the use of the students, which is now adopted far and wide throughout India. He also started the “Professional Papers on Indian Engineering.”

From Roorkee, General Medley went to Lahore, first as Superintending Engineer, and then as Consulting Engineer for Guaranteed Railways. During his eight years’ tenure of the latter office he saw the carrying capacity of the Sind, Punjab, and Delhi railway increased at least 50 per cent. by means of extensions, improvements, the addition of new stations, and the increase of rolling-stock. By the opening of the Punjab Northern and the Indus Valley Railways the sphere of General Medley’s responsibility was greatly extended, and this occurred at the time of the Afghan War, which threw such a sudden stress of traffic on the lines. The efficiency of the transport at this period was in a great degree due to the manner in which General Medley urged on the construction of the frontier lines ; and when it is considered that the lines were thrown open long before the work of construction was nearly finished, and that the difficulties were further augmented by paucity of rolling-stock, the result must be regarded as most creditable to all concerned.

At the close of the war, the control of the two State lines was transferred to the Director-General of Railways, and the Consulting Engineer has since only acted as Inspecting Officer for these lines. Still, General Medley continued to exercise control, more or less, over upwards of 2000 miles of railway, and he witnessed an extension of the lines of Northern India at the rate of 200 miles a year, for the past seven years. With regard to the large schemes of railway extension which have lately been occupying so much attention, his opinion was that it would be a wiser course to develop the system of feeder lines, rather than to launch out into a number of altogether fresh enterprises. This is doubtless a matter on which there is difference of opinion; but there is one ground of common faith on which all who have known General Medley will readily unite - the recognition of the unfailing courtesy, kindliness, and chivalry which he showed in the course of his ordinary duties, or in the conduct of reforming controversy. The position of a Consulting Engineer is one of great difficulty; his large powers of control are only loosely defined. The guarantee-system involves double government and divided responsibility, and it is only by means of compromise that the work can be carried on at all, where differences of opinion are certain to rise. It is therefore to the honour alike of General Medley and of the authorities of the Sind, Punjab, and Delhi Railway that the arduous work in this case has been accomplished smoothly and in a spirit of entire friendliness. To General Medley’s many friends it would indeed have been strange had it been otherwise. Genial, cultured, enthusiastic, hospitable, General Medley retired full of life and vigour, and it was not too much to hope that his Indian career might yet have its counterpart in England, where his special knowledge, wide experience and literary gifts, would no doubt have been highly esteemed.

These justifiable hopes were however not destined to be fulfilled, for his career was suddenly cut short at Port Said, on board the P. & O. steamer Ravenna, homeward bound, on the 28th of August, 1884, when he was only fifty-five years of age.

General Medley was elected an Associate of the Institution on the 28th of Nay, 1861, holding at that time the rank of Major.