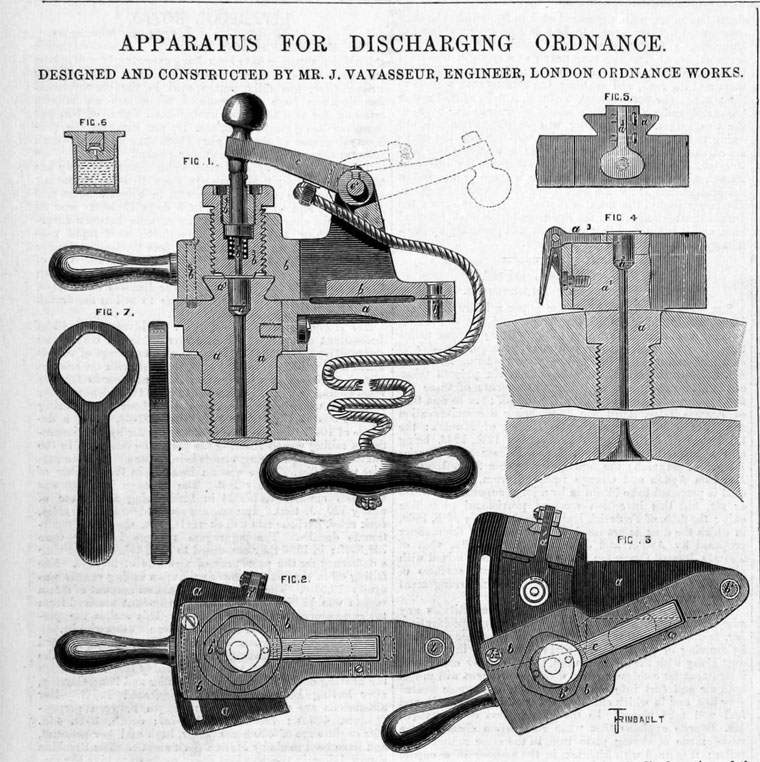 1860 Took over a small iron works at 28 Gravel Lane, Southwark (previously used by Easton and Amos to make and test the paying-out gear for the Atlantic telegraph cable). Vavasseur also secured a patent for improvements in rifling cannon.

1860 Josiah Vavasseur became a member of the Honourable Artillery Company

1863 Made spherical steel shot. The works were acquired and extended by Captain Blakely and his partner, John Dent; Vavasseur became manager and engineer to the Blakely Ordnance Co.

1866 Patented improvements in compressors or apparatus for receiving and absorbing the recoil of guns and other ordnance.

1867 Took over the ordnance works in Southwark

After receiving a general education, he was apprenticed for six years to the firm of Messrs. James Horn and Co., engineers, Whitechapel. Part of this time was spent in the pattern and model shops, and in the fitting and erecting shops; he was also four years in the drawing-office, during two years, of which he was head of the designing department.

On completion of his apprenticeship he started a general engineering business on his own account at Southwark, and his first connection with artillery was the designing, in 1861, of a rifling-machine for the rifling of the smooth-bore guns then in use; this was a portable machine, built for transporting to the guns which required grooving.

He remained in private practice until 1862, after which, until 1866, he was associated with the Blakely Ordnance Co., which took over his works. He designed and constructed various types of guns and mountings and built-up steel pieces of ordnance, which were supplied in large numbers to several foreign nations.

In 1866 he invented the copper rotating ring, or band, for the projectiles of breech-loading guns.

On the winding up of the Blakely Ordnance Co., he, in 1867, acquired the premises of the company at Bear Lane, Southwark, and continued the business there in the name of J. Vavasseur and Co., the works being styled the London Ordnance Works.

From 1867 to 1883 be was actively engaged in perfecting his system of constructing built-up steel guns, and in carrying out improvements in the construction of gun-mountings.

In 1877 he originated the naval hydraulic gun-mounting with which his name is associated, and this soon found favour in the British service by reason of the ease and certainty with which it worked, and it was eventually used in every navy of the world.

Orders having become so numerous, he decided in 1883 to merge the whole of his interests with Messrs. Armstrong and Co., of Elswick. Since that date he continued an active director of Sir W. G. Armstrong, Whitworth and Co., until within the last two or three years, when failing health prevented his attendance. He was created a Companion of the Order of the Bath in 1896.

His death took place at his country seat at Thetford, on 13th November 1908, at the age of seventy-four.

He was responsible for many important improvements in various branches of ordnance, and at the time of his death was a director of Sir W. G. Armstrong, Whitworth and Company, Limited.

Born at Braintree, Essex, in 1844, he served his apprenticeship to James Horn and Company, an East London engineering firm, and subsequently started business on his own behalf at Southwark in 1860.

In the following year he invented a portable machine for rifling guns, and afterwards associated himself with Captain Blakely, R.A., in the design and manufacture of steel guns, gun-mountings and other ordnance. His works were then taken over by the Blakely Ordnance Company, to whom he became engineer and manager.

In 1867, on the winding up of the company, Mr. Vavasseur continued the business until 1883, when, his inventions having been taken up by the British Navy as well as by foreign navies, and the resultant pressure of business being too great for his own works to cope with, he decided to merge his business in the firm of Sir W. G. Armstrong, Whitworth and Company.

He then joined the board of directors, and continued to take an active interest in the business until within two or three years of his death. His driving bands for projectiles and improved naval gun-mountings are amongst the many ingenious devices which he successfully introduced, and his inventions are now in use on ordnance throughout the world. In recognition of his services, he was made a Companion of the Order of the Bath in 1896.

At his home at Thetford in Norfolk he gave generously to various religious and philanthropic undertakings, in which he took an active personal interest.

Mr. Vavasseur was elected a Member of The Institution on the 4th May, 1875.

. . . well known in connection with the development of modern ordnance. Mr. Vavasseur was born in 1834, and was the son of George Vavasseur, of Bocking, Essex. . . . In 1867, on the winding up of the Blakely Ordnance Co, Mr. Vavasseur acquired their premises and business, and carried it on until the year 1883 under the title of J. Vavasseur and Co. at the same place, namely, the London Ordnance Works, Bear-lane, Southwark. . . . By the year 1883 the business which Vavasseur and Co. had with the home Government and others reached such proportions that it was impossible to carry it on properly at the London works, or, indeed, single-handed, and the firm was therefore fused with that of Armstrong's, Mr. Vavasseur becoming a director, and all manufacture transferred to the well-known Elswick Works. In his position of director Mr. Vavasseur still continued his work of improving ordnance in every detail, and took part in active management up to within the last three or four years. . . .[more]