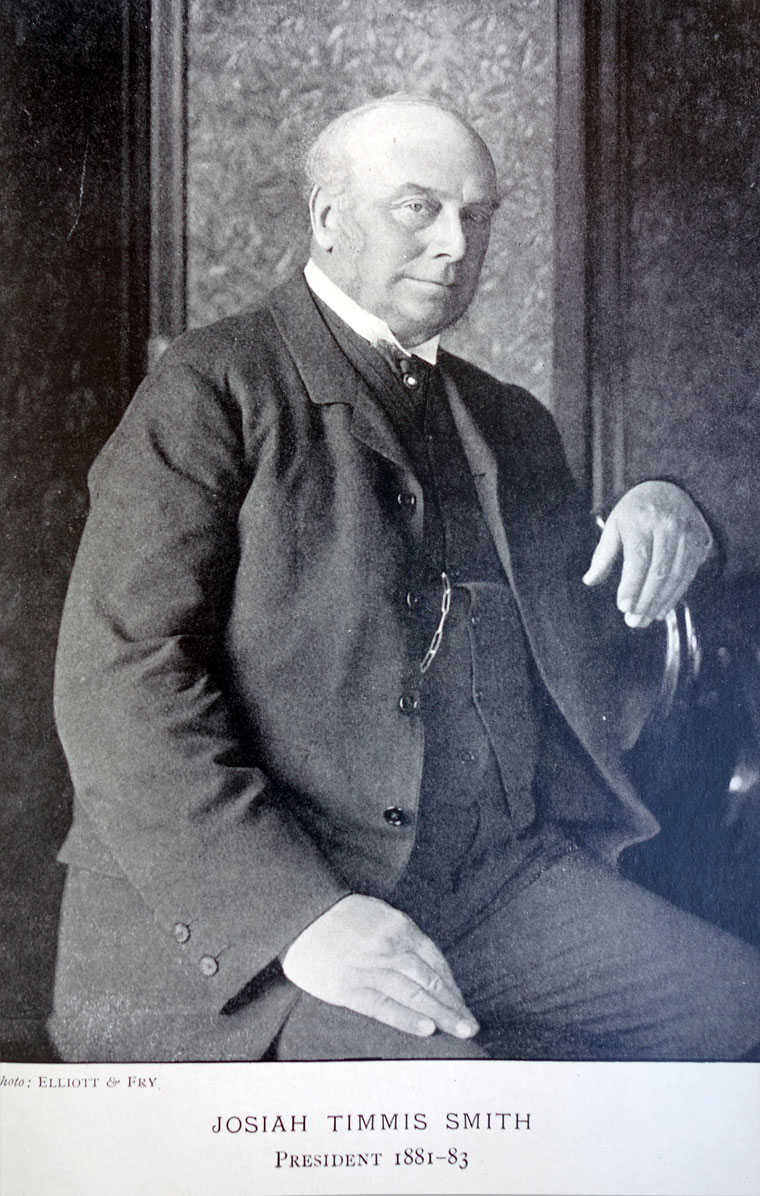 By the death of Mr. Josiah Timmis Smith, the senior past-president of the Iron and Steel Institute, which occurred on Saturday last at his house at Rhine Hill, near Stratford-on-Avon, the world has lost one who during the past fifty years, has done much towards building up and developing the great iron and steel industries of this country.

Mr. Smith was born in 1823 at Duckmanton near Chesterfield, where his father, the late Benjamin Smith, owned blast furnaces, and he came of a family which, for many generations, had been connected with the iron industries of Yorkshire and Derbyshire, his grandfather having been Master Cutler of Sheffield in 1797.

He was educated at Mill Hill School, and for a short time assisted his father at the works at Duckmanton, but at the age of about nineteen or twenty went as a volunteer to the works of John Wilson and Co, of Dunfermline (sic), near Glasgow, then one of the best works in the country, to get a thorough practical training in iron manufacture.

His father having decided to erect a new blast furnace plant at Stanton, he returned home, and assisted his father in the erection of these works in 1845.

He stayed at Stanton till about 1850, when he decided to go to Creusot to gain further experience....[more]

JOSIAH TIMMIS SMITH, the eldest son of Benjamin Smith, of Duckmanton Lodge, near Chesterfield, was descended from a family connected for many generations with the iron and steel trades.

Born on the 19th February, 1823, Mr. Smith was educated at Mill Hill School, and then went to the Dundyvan Works to learn blast-furnace practice.

About 1850 Mr. Smith spent nearly a year at the Creusot Works, France, and subsequently spent some years with Mr. Samuel Blackwell, a well-known ironmaster of the period, before going into business on his own account in South Staffordshire. He had thus acquired wide experience in blast-furnace practice and management, and when Messrs. Schneider, Hannay and Co., the owners of rich red haematite mines in Furness, decided in 1858 to build furnaces at Barrow, they placed the construction of the works in Mr. Smith's hands. On their completion he undertook the management of the works.

He removed to Barrow in 1860, and four years later the Barrow Hamatite Steel Company was organized to take up the manufacture of Bessemer steel. Equipped with scientific completeness and with the most modern machinery, these works, in the course of a very few years, acquired a world-wide reputation. For more than twenty years Mr. Smith, as manager and director, was the executive head of the Barrow Works, which, under his able and progressive guidance, always retained a prominent position in the iron and steel industry.

Mr. Smith was an original member of the Iron and Steel Institute, founded in 1869, and served on the Council of that body from the outset; he was President from 1881 to 1883. He was also an original member of the British Iron Trade Association, of which he was President from 1886 to 1888. During his long residence at Barrow he took an active part in the municipal life of the tom, serving on the Town Council from 1867 to 1887, and as Mayor from 1872 to 1875. For many years he was County Magistrate for Lancashire, and later was on the Warwickshire Bench.

In 1887 Mr. Smith left Barrow and went to reside at Rhine Hill, near Stratford-on-Avon. He became a Director of the Capital and Counties Bank, Chairman of the Midland Railway Company of West Australia, and of the Otis Steel Company, and was connected with other industrial companies. Although retiring to some extent from some of his engagements in later years, he continued to lead an active business life until the early part of 1905, when his health began to fail.

Mr. Smith was elected a Member of The Institution on the 3rd March, 1868.

JOSIAH TIMMS SMITH, Past-President, died at Rhine Hill, Stratford-on-Avon, on March 31, 1906, in the eighty-fourth year of his age, and at the time of his death was the senior Past-President of the Iron and Steel Institute. He was born on 19th February 1823, and was the eldest son 'of Benjamin Smith of Duckmanton Lodge, near Chesterfield. He was descended from probably the oldest family continuously connected with the English steel trade, being seventh in descent from Henry Smith, whose name is included in the original charter to the Cutlers Company, granted by James I. in 1624. In this direct line of descent John Smith was Master Cutler in 1722, and Town Collector of Sheffield in 1731; and Joseph Fletcher Smith was Master Cutler in 1796. The connection of the family with the iron trade originated probably about 1740, when John Smith, the son of the Master Cutler of 1722, and the father of Fletcher Smith, bought an interest in local blast-furnaces, which eventually became his sole property. So far as the iron trade is concerned, the family is, therefore, junior to the Darbys of Coalbrookdale. It is still represented in Sheffield by well-known names.

Mr. Josiah Timmis Smith was educated at Mill Hill School, and then went to the Dundyvan Works in Scotland to learn blast-furnace practice. Later he became a partner with his father in the Duckmanton Iron Works, and subsequently in the Stanton Iron Works, which he assisted to build. He also spent about a year in France at the Le Creusot Works, and for some years he was with Mr. Samuel Blackwell, probably the most scientific ironmaster of the period. Mr. Smith had thus acquired great experience in blast-furnace practice and management, and when it was decided in 1858 by Messrs. Schneider, Hannay & Co., to build furnaces at Barrow-in-Furness, he was their consulting engineer for the construction of the works. For many years the red haematite ores of Furness had been locally smelted with charcoal on a small scale; but these large Barrow furnaces, equipped with every then known modern improvement, were the first of their kind in that part of England. When completed the engineer undertook the management, and in 1860 he went to reside at Barrow. The success of the enterprise was great, and four years later it was decided to take up the manufacture of Bessemer steel, for which purpose a separate company was organised - the Barrow Haematite Steel Company, of which Mr. Smith was the manager, and also a shareholder in the very limited list of adventurers, as Bessemer steel had scarcely then established its reputation on an assured foundation. On the 1st January 1866, the Steel Company was enlarged, its capital was greatly increased, and it absorbed the mines and blast furnaces of Schneider, Hannay & Co.; the late Duke of Devonshire was the chairman, and he, with the late Duke of Buccleuch, Mr. Schneider, and Mr. Hannay, were the principal shareholders. Almost at once the Company acquired a leading position in the steel trade. During the "seventies" it was believed to have the largest turn-over of any manufacturing concern in Great Britain, and during the first twenty years of the existence of this important undertaking, Mr. Smith was the managing head of the enterprise.

He was also much occupied in municipal life, and, from the incorporation of Barrow-in-Furness in 1867, and until 1887, he was on the Town Council; he was Mayor of the town he had done so much to develop from 1872 to 1875; he was also a County Magistrate for Lancashire, and later for Warwickshire, and for many years was one of the most constant attendants on the Bench at Barrow. He was an original member of the British Iron Trade Association, of which he was President from 1886 to 1888, during which period very important matters were under consideration by that Association with regard to the commercial side of the iron and steel trades. In 1887 he severed his long connection with Barrow, and for the remainder of his life resided at Rhine Hill, near Stratford-on-Avon. Until about a year before his death he continued actively engaged in business affairs; he was a director of the Capital and Counties Bank, and was on the boards of several other companies; he was also interested to a considerable extent in the tinplate trade of South Wales.

He was a member of the Institution of Civil Engineers, and of other societies. He was one of the founders of the Iron and Steel Institute in 1869, and was on the Council from the outset. From 1881 to 1883 he was President, and during those two years the Institute, under his guidance, made rapid progress. He continued to take an interest in the welfare of the Institute until his death, and regularly to attend the meetings.