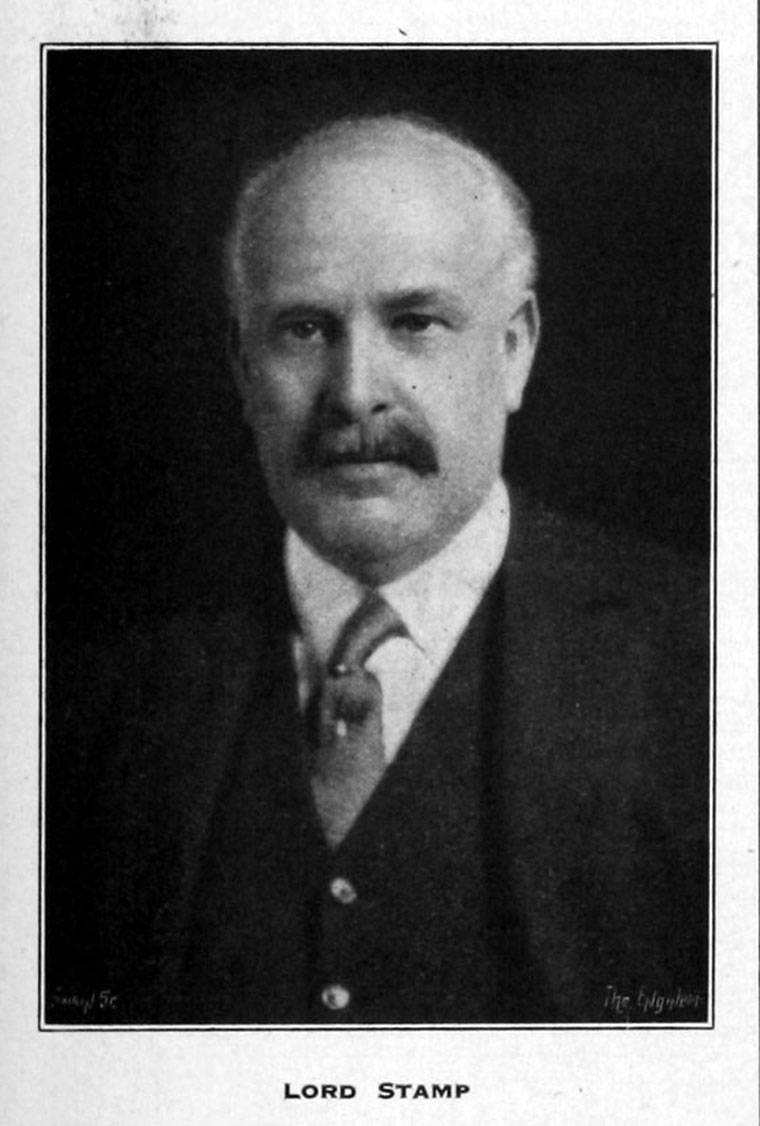 Josiah Charles Stamp, 1st Baron Stamp, Bt, GCB, GBE, FBA, (June 21, 1880-April 16, 1941) was a British civil servant, industrialist, economist, statistician and banker. He was the first director of the Bank of England and chairman of the London, Midland and Scottish Railway.

Josiah was born in Kilburn, London, the third of seven children; his youngest brother L. Dudley Stamp became an internationally renowned geographer. At the time of his birth his father owned and managed a provision and general shop in London.

Educated at a private Baptist school, Bethany House at Goudhurst, Kent, Josiah left school at 16 and joined the Civil Service as a boy clerk in the Inland Revenue Department. With a brief interval in the Board of Trade, he rose to assistant inspector of taxes at Hereford in 1903, an inspector of taxes in London in 1909, and assistant secretary in 1916.

Meanwhile he was studying economics as an external student. He was awarded a first class degree (1911) by the University of London and a doctorate (1916) by the London School of Economics. The thesis, published as British Incomes and Property, became a standard work on the subject and established his academic reputation.

Stamp met his future wife, Olive Jessie Marsh, a soprano and student teacher, when he was seventeen. Pursuing their work and studies separately for several years until their marriage in 1903, they engaged in a correspondence that gives us a rich sense of Stamp's formative years (Jones 1964). Between 1904 and 1917 they had four sons, Wilfred, Trevor, Maxwell and Colin. It was as a result of this marriage that Stamp, son of a Baptist father and Church of England mother, converted to the Wesleyan Methodist Church. A few of his writings (see below), such as Christianity and Economics (1939), discuss the relevance of Christian values to contemporary economics systems.

In 1919 Stamp changed career, leaving the civil service for business, to join as secretary and director of Nobel Industries Ltd, from which Imperial Chemical Industries developed. In 1926 he became Chairman of the LMS and was instrumental in getting William Stanier appointed in 1932 as Chief Mechanical Engineer to resolve the locomotive problems of the Company. In 1928 he was appointed a director of the Bank of England.

Stamp was often called to serve on public commissions, committees and boards: he was a member of the Royal Commission on Income Tax, 1919, the Northern Ireland Finance Arbitration Committee, 1923–24, the Committee on Taxation and National Debt, 1924, the Dawes Reparation Commission's Committee on German Currency and Finance, 1924, the Young Committee in 1929 and the Economic Advisory Council, 1930-39.

Stamp was widely regarded as the leading British expert on taxation, and took an active part in the work of the Royal Statistical Society, serving as president from 1930 to 1932.

He was first Mayor of the Borough of Beckenham, Kent, within which he had settled at Shortlands, in 1935. He was made an honorary Freeman of the same borough in 1936 and of Blackpool in 1937.

Stamp refused to be moved out of his house, 'Tantallon', in Park Hill Road, Shortlands, because of German bombing during The Blitz. He, aged sixty, and his wife, aged sixty-three, were killed by a bomb's direct hit on the air-raid shelter at their home on 16 April 1941. They were buried at Beckenham Cemetery. Ironically in 1935, he had been a founder member of the Anglo-German Fellowship and had made low key visits to Nuremberg in 1936 (when he met Adolf Hitler - whom Stamp noted was a "statesman and demagogue combined" - and Franz von Papen), and 1937, to view the Nazi Party Congress with the unspoken support of the then Foreign Secretary Lord Halifax.

Stamp's son Wilfred was killed at the same time and in the same place, but English law has legal fiction that in the event of the order of deaths being indeterminable, the elder is deemed to have died first. Legally therefore, Wilfred momentarily inherited the peerage: and as a consequence the family had to pay death duty twice. The peerage passed to the second of Stamp's four sons, Trevor.

"...say that Lord Stamp, whose death by enemy action we mourn, was the greatest financial economist of his day, we should be at once reminded of two or three other men who might challenge that distinction. But if we say that he was the most widely known, that will perhaps be accepted. He had a reputation as a lecturer, and, as is common in such cases, many people went to hear the man though they could not understand the matter. In truth, he was often not easy to follow, and some of his addresses are more suitable for the study than the platform. He was a conventional economist-at least, we cannot recall any novel financial proposals being advanced by him. But he was conventional..."More.