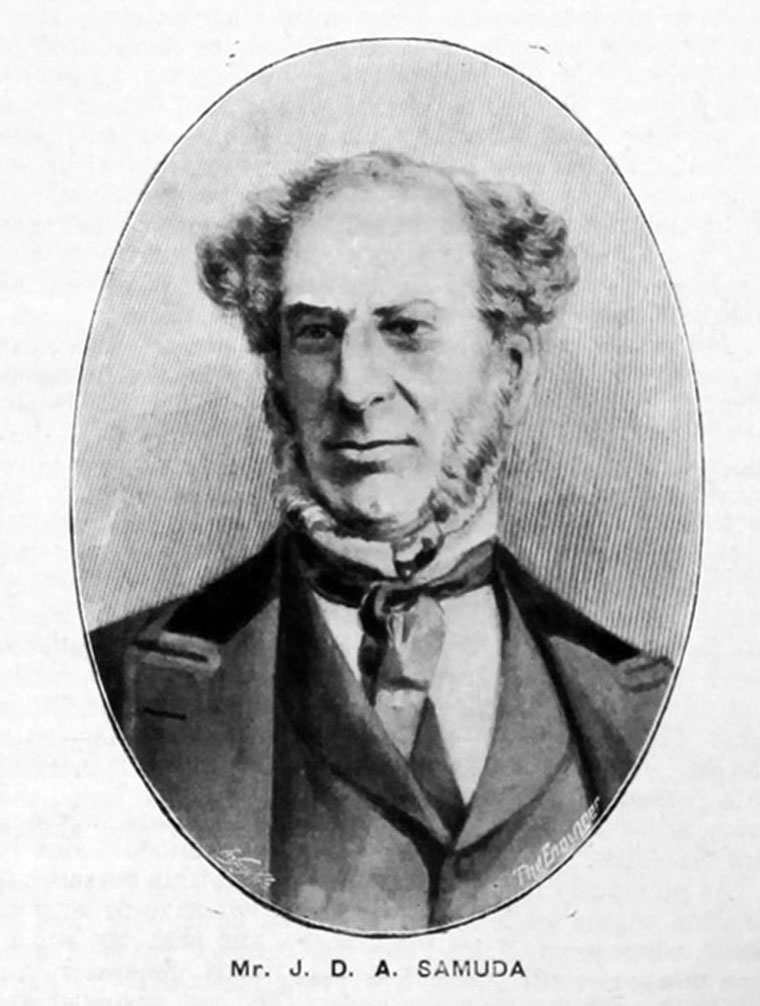 1867 Mr. Samuda moved, and the House of Commons ordered, the printing of the entire correspondence between the Admiralty and several shipbuilding firms concerning the tenders requested for either a broadside or turret ship. These were issued with the reports of Admiral Robinson as Controller, and Mr. E. J. Reed as Chief Constructor of the Navy as a thin Blue-book and became known among naval architects as "Mr. Samuda's return."[2]

JOSEPH D’AGUILAR SAMUDA was born in London, in the year 1813, and was the son of Mr. Abraham Samuda, an East and West India Merchant of Finsbury, by Joy, daughter of Mr. H. D’Aguilar, of Enfield Chase.

He studied as an engineer under his brother Jacob Samuda, with whom he became a partner in the year 1832.

During the ten years between 1832 and 1842, the operations of the firm of Samuda Brothers were principally confined to the building of marine engines.

In the year 1840, attention was largely drawn to experiments carried out on Wormwood Scrubs having for their object the application of atmospheric pressure to the propulsion of railway trains. Mr. S. Clegg and Mr. Jacob Samuda having turned their attention to the subject, patented a scheme for atmospheric railways, which the firm of Samuda Brothers were engaged in putting into practice between the years 1842 and 1848: They laid down and worked experimental lines at Dalkey, Croydon, Paris, and other places; but the practical difficulties connected with the system were so great as to prevent its general adoption, and it was eventually abandoned.

In the year 1843 the firm commenced that shipbuilding business which soon established a reputation for itself, and has since made the name of Samuda so widely known. One of the first vessels built was the 'Gipsy Queen', a name carrying with it painful associations, for it was on board of her that Mr. Jacob Samuda lost his life, in 1844, by the giving way of a defective expansion joint, during a trial of the engines.

From the year 1843 until the present time the firm of Samuda Brothers has been uninterruptedly engaged in the construction of ships of all kinds, for both the war- and merchant-navies of this and other countries. It need hardly be said that the changes and improvements that have taken place during that period in ship-construction have been enormous and numerous, and most of them are to be found reflected in the ships built by Mr. Samuda. Indeed a sufficiently detailed account of the shipbuilding operations of the firm of Samuda Brothers, from the year 1843 to the present time, would constitute an excellent history of the rise, progress, and development of iron steam-ship construction.

In their yard on the Isle of Dogs are found most of the time- and labour-saving machines which have at intervals been introduced for the more accurate and more rapid preparation and manipulation of the materials used in the many departments of the art. Among these especially worthy of mention is a hydraulic armour-plate bending machine, which has been at work for many years, and is capable of exerting a working pressure of 70 cwt. per square inch, or a total pressure of 4,000 tons. An enumeration of the vessels built by Mr. Samuda would be tedious. Suffice it to say, that it would include many of the most noted steamers of the leading mail- and passenger-services, many iron-clad men-of-war for the British and other navies, many vessels for other branches of naval services,. besides Royal yachts, channel steamers, river-boats, &c. The excellence in ship-construction, to which the firm attained under Mr. Samuda’s control, is well illustrated by some of the vessels of war lately built by them, notably the two most recent iron-clads, the 'Riachuelo' and the 'Aquidaban,' belonging to the Brazilian Government, and also by the three famous channel steamers, 'Albert Victor,' 'Louise Dagmar,' and 'Mary Beatrice,' which ply between Folkestone and Boulogne. These ships are justly looked upon as embodying the most recent developments of the practical shipbuilder’s art in a more economical and effective manner than has before been accomplished with vessels of similar types.

On the 6th of May, 1862, Mr. Samuda became a Member of this Institution, though he had been an occasional visitor at its meetings for many years previously. It was at the discussion of a Paper, by his brother, Jacob Samuda, on the atmospheric railway system, previously spoken of, that he first attracted attention as a debater. The Secretary, Mr. Charles Manby, was so struck by his fluent diction, as well as by his thorough mastery of the subject, that he immediately set about to attract to the meetings outsiders of as near Mr. Samuda’s calibre as might be, in order to import more character into the somewhat slow and decorous style of the discussions, as they then obtained. Mr. Samuda contributed one Paper only to the Proceedings, 'On the Form and Materials for Iron-plated Ships', for which he was awarded a Watt medal; but his speeches, on subjects with which he was familiar, were always forcible and instructive, and often of hardly less value than the more ambitious communications upon which his comments were invited. The importance attaching to his opinion can perhaps be better understood if, while bearing in mind his great natural ability and attainments, it is endeavoured to realise what an experience of fifty years such as his comprised.

In the year 1830, about the commencement of his career, the number of steamships belonging to the British Empire was three hundred and fifteen. These were all small craft employed exclusively in river- and coasting-trades, the 'leviathans' among them being below 500 tons in measurement. Only a few small iron vessels had then been built, and these were merely employed in river-navigation. Iron ships were not considered safe, and none had yet been built for over-sea voyages. Compare with this the fact that three hundred and twenty-three iron and steel steamers-of various sizes up to and exceeding 8,000 tons - were launched, in 1884, upon the Clyde alone, several of which make the longest sea voyage possible - viz., that from this country to New Zealand - under steam. The screw-propeller, the use of which is now universal - except where special service renders the paddle or other propeller more suitable - although known in earlier centuries, was first successfully applied to the propulsion of ships in 1836.

The steam-hammer, which now occupies so important a place in all engineering works, was invented by Mr. Nasmyth in 1838.

The first of the great steamship lines, which now traverse the ocean in every direction, at speeds ranging from 16 to more than 20 miles an hour, commenced running its steamers in 1840. The almost magical transition from the lumbering old stage-coach to the swift-gliding Pullman 'express' is within the experience of much younger men than the late Mr. Samuda.

The completion of the great Plymouth breakwater in 1841, and of the Thames Tunnel in 1843, and the building of the Britannia Tubular Bridge in 1846-50, are so many landmarks typical of the progress in various branches of engineering. The great development of naval artillery from the old 68-pounder to the modern 110-ton breech-loading gun ; the introduction and increase in thickness of armour-plates, from the 4 inches of the 'Warrior' to the 24 inches of the 'Inflexible,' and the thick iron armour, with a steel face, of the most recent ships; the general adoption of steel for shipbuilding and other purposes : all these things, and many more, came within the range of Mr. Samuda's experience.

Mr. Samuda was among those who, in 1860, co-operated with Sir Edward Reed, M. Inst. C.E., in the formation and establishment of the Institution of Naval Architects, of which he was elected the original treasurer, and a member of council. He subsequently became one of its vice-presidents. In the progress of that Institution he naturally took a great interest, and was a regular attendant at its meetings. His contributions to its Transactions were numerous, and there were few discussions of any importance in which his voice was not heard and listened to with the greatest deference. He was universally regarded by the members of that Institution as one of its most zealous leaders, and most able debaters.

Mr. Samuda was a member of an important Committee appointed by the Admiralty last year, and presided over by the Earl of Ravensworth, to inquire into the condition under which contracts are invited for the building and repairing of H.M. ships, and their engines, and into the practical working of H.M. dockyards.

Mr. Samuda took his seat in Parliament as Member for Tavistock, in the year 1865, on the Liberal side of the House, which seat he retained until the dissolution in 1868. In that year he was returned as Member for the Tower Hamlets, for which constituency he was re-elected in 1874. He continued to represent it until the election of 1880, when his constituents refused to return him on account of his attitude towards the foreign policy of the out-going Government. He spoke frequently in the House, and his speeches were always regarded as valuable contributions to the subject under discussion, more especially when the subject happened to be the' navy or kindred branches of the public service.

He died somewhat suddenly on Monday, April 27th, 1885, from syncope, and was buried, May 2nd, in Kensal Green Cemetery.

His long and honourable life, his widely extended business relations, his close connection with scientific institutions, and his position as Member of Parliament, had made him known to a large circle of friends, by whom the news of his death was received with the deepest regret.

JOSEPH D'AGUILAR SAMUDA was born in London in 1813, and early became a pupil of his elder brother, Jacob Samuda, with whom he entered into partnership as an engineer in 1832.

The firm were at first principally engaged in marine-engine building, but in 1843 shipbuilding was added to the business; and from 1842 to 1848 ho was engaged in carrying out, on the Kingstown and Dalkey, Croydon, South Devon, and Paris and St. Germains lines, the atmospheric railway on the plan of his elder brother and Mr. Samuel Clegg.

From 1851 he occupied himself almost exclusively in iron and steel shipbuilding, and constructed a large number of vessels for most of the principal navies and leading mercantile companies. Amongst them may be mentioned the "Thunderbolt," the first armour-cased iron vessel built; the "Prince Albert," the first iron-clad cupola ship built; and the "Mortar Float No. 1," the first iron mortar vessel built.

Of late years the principal part of his work was the construction of armour-clad vessels, the most recent being the Brazilian turret ships "Riachuelo" and "Aquidaban."

In 1860 he assisted in the formation of the Institution of Naval Architects, of which he was subsequently a Vice-President.

In 1864 he became a Member of this Institution.

In 1865 he entered parliament as member for Tavistock ; and in 1868, and again in 1874, he was elected to represent the Tower Hamlets.