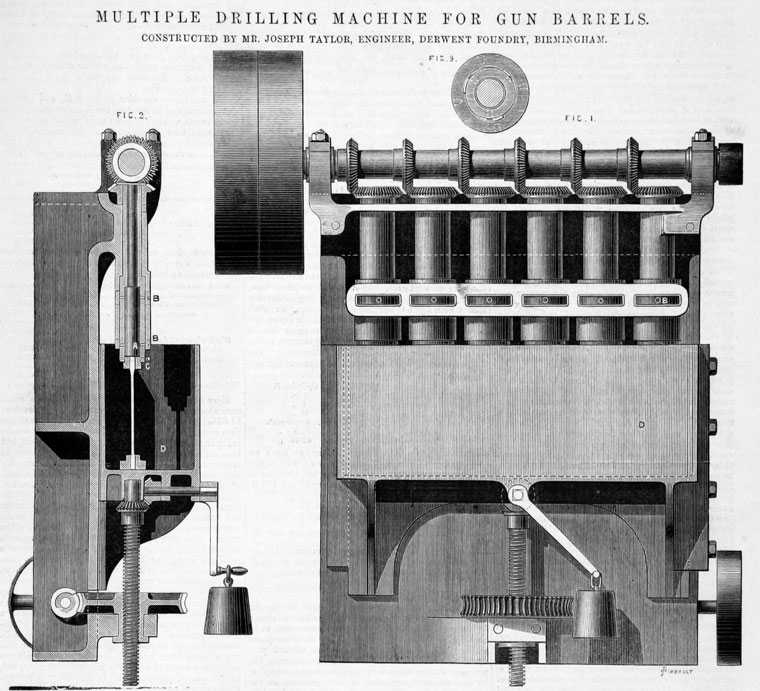 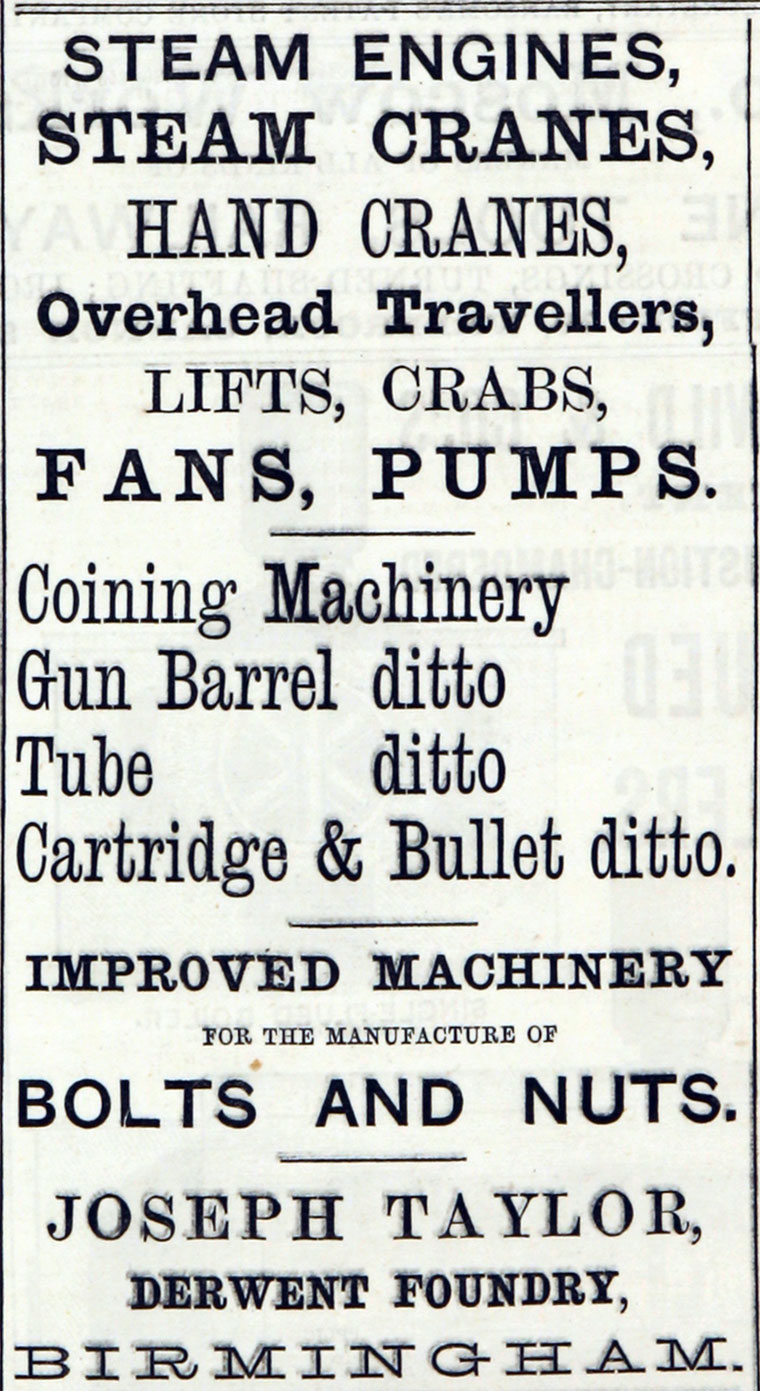 1839 Partnership dissolved between Alexander Dean and Joseph Taylor, engineers, Birmingham. Trade to be carried on by Taylor[2]

c.1860 Designed and manufactured machines for rolling and welding gun barrels. Customers included the Government Small Arms Manufactory at Enfield and, shortly after the start of the American Civil War, the Colt Small Arms Co at Hartford, USA. In 1862 11 sets of rolls were sent to the American Government's Harper's Ferry and Springfield works to replace the equipment taken by the Confederates and removed to Richmond.[4] [5]

1889 Became chairman of Taylor and Challen when it was incorporated as a private company.

JOSEPH TAYLOR was born on 22nd December 1814, at Blanchland, Northumberland.

At the age of thirteen he commenced to work in the Derwent lead mines.

Two years afterwards he went to serve his apprenticeship in an engineering works at Hexham; and subsequently worked for a short time at the Bedlington Iron Works.

In 1838 he went to Birmingham, where he obtained a situation at the London Works of Messrs. Fox Henderson and Co., and then at the Horseley Iron Works, Tipton.

About 1842 he started in business as an engineer in Birmingham, and being successful he then occupied larger premises in Broad Street. Having constructed some coining machines for Mr. Ralph Heaton, the founder of the firm of Ralph Heaton and Sons, he was entrusted in 1853 with the order for a complete set of minting machinery for the branch of the Royal Mint at Sydney, New South Wales; and he succeeded in introducing notable improvements in the various machines.

In May 1855 it was reported by Captain Ward, R.E., who had the superintendence of the Sydney Mint, that the machinery was perfect both in workmanship and materials.

In 1857 he made the bombs which were thrown by Orsini and others at the Emperor Napoleon in Paris.

In 1860 he purchased the site of the old works of Messrs. Jennens and Betteridge, papier-mache makers in Constitution Hill, Birmingham, which had been destroyed by fire, and erected the works known as the Derwent Foundry. Here he constructed the machinery for a branch of the Royal Mint at Melbourne, Victoria; which was sent out in 1869, and has been successfully working ever since.

He also made minting machinery for the Siamese government and for several native princes of India; and also machines for several of the European mints.

He introduced improvements in rolls for rolling gun barrels; and also in machinery for the manufacture of tubes and many other articles made so extensively in Birmingham and the surrounding district.

In 1869 he completed the first hydraulic machine for making moulded pellets of gunpowder, from the designs of Mr. (afterwards Sir) John Anderson, superintendent of machinery, Woolwich Arsenal. This machine was erected at the Royal Gunpowder Factory, Waltham Abbey, and 400 pellets of gunpowder were compressed at each stroke.

On 1st January 1873 his son, Mr. Joseph S. Taylor, and Mr. S. W. Challen, who had served an apprenticeship to him, joined him in partnership; and at midsummer 1875 he retired from the firm until 1889, when the business was formed into a private company of which he was appointed chairman.

He was one of the trustees of the Yardley charity estates, and took an active part in the public life of the parish in which he resided.

His death took place at his residence at Acocks Green, near Birmingham, on 2nd November 1890, at the age of seventy-five.