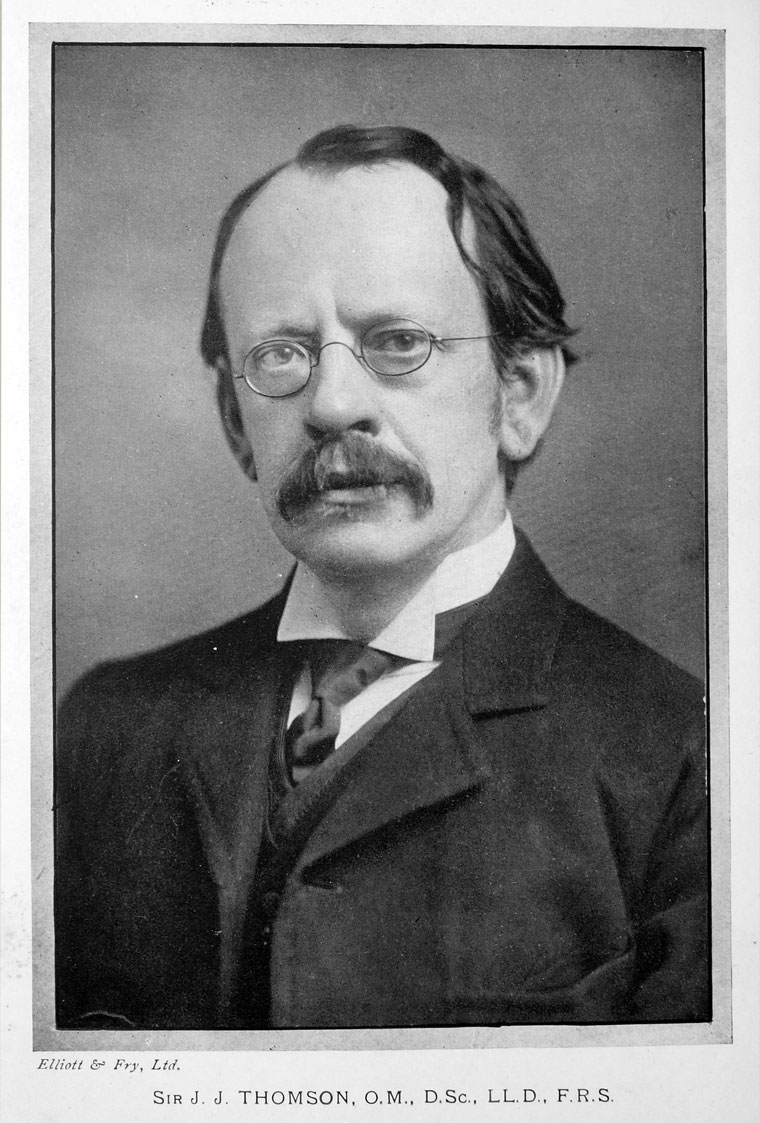 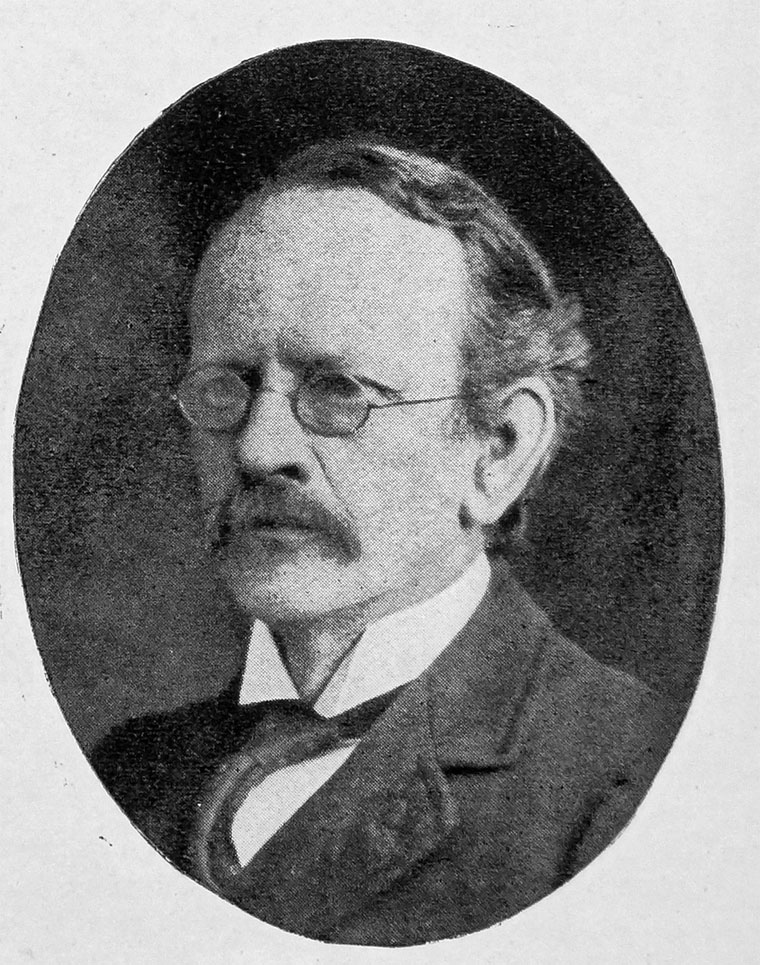 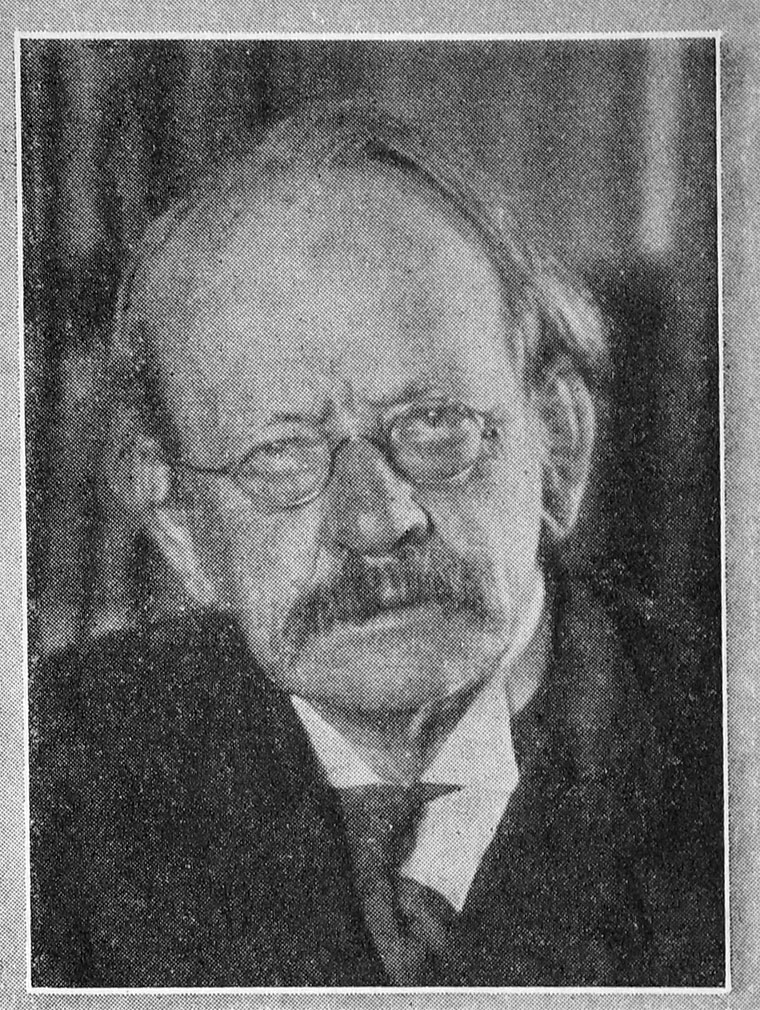 1856 born on 18 December at Cheetham Hill, near Manchester, the elder son of Joseph James Thomson (d. 1873), antiquarian bookseller, and his wife, Emma (nee Swindells) (d. 1901). Emma's family was a branch of the local Vernon family who owned a cotton spinning company in Manchester. Their younger son was Frederick Vernon Thomson.

1894 Lectured at the Royal Institution of Great Britain on Electric Discharge through Gases.

Sir Joseph John Thomson, one of the greatest men of science of this age, died at Cambridge on August 30, 1940, at the age of 83.

With his work on the passage of electricity through gases, and the famous discovery of the electron, he became the acknowledged founder of modern physics. It was this discovery that led to the new conception of matter and energy which, with the evolution of the electron theory of metals, has had such a profound effect on the development of metallurgical science. Thomson was born near Manchester on December 18, 1856.

It was originally intended that he should be an engineer, and, at the age of 14, while waiting for a vacancy as an apprentice, he went to Owens College to study engineering. During this time he became interested in physics, which he decided should be his career, and in 1876 he won a scholarship at Trinity College, Cambridge, and began the association with this college which was to end only with his death. In 1880 Thomson became second wrangler and a Smith's prizeman, and was elected a Fellow of Trinity College later in the same year. At this time he began to work on moving electrical charges in the Cavendish laboratory under Lord Rayleigh, and for this and other researches he was elected a Fellow of the Royal Society in 1884.

Later in this year, though only 27 years of age, he was elected to succeed Lord Rayleigh as Cavendish Professor of Experimental Physics. Here, following after his great predecessors Rayleigh and Clerk Maxwell, he began the study of electricity and matter which was to make himself and his pupils at the Cavendish laboratory famous throughout the world. The discovery of the electron was first publicly announced in 1897 and immediately opened up new fields of investigation. The fame of Thomson and of his Cavendish school spread throughout the world.

From this time onward he received innumerable honours; he was awarded the Nobel Prize in 1905, was knighted in 1908, and appointed to the Order of Merit some years later. During the war of 1914-1918, Thomson did much important work in connection with the Department of Scientific Re- search, and was elected President of the Royal Society in 1915. His work received recognition from many institutions by which he was elected an honorary member; he held honorary degrees from universities in this country and all over the world, and received medals and awards from both British and foreign scientific societies.

At the end of the war he was appointed Master of Trinity College, and resigned his Cavendish Professorship. He was, however, awarded an honorary professorship, and was able to carry on with his researches at the laboratory with which he had been connected for so great a part of his life. Innumerable tributes to "J. J." have been written by his former pupils, now among the leading scientists of the world. He had become an institution, not only because of his own work, or the school that he founded, nor because of the tremendous developments in atomic physics that his discoveries began, but became he was a great man as well as a great scientist, a man who, besides founding one of the greatest schools of modem physics, was the founder of a great tradition which will not easily be forgotten.

Sir Joseph Thomson was elected an Honorary Member of the Institute of Metals in 1916, and gave the May Lecture, on "The Conduction of Electricity Through Gases," at the Annual May Meeting in 1915.

Sir JOSEPH JOHN THOMSON, O.M., LL.D., D.Sc., F.R.S., who by his researches into the structure of matter, revolutionized modern physics, was elected an Honorary Life Member of the Institution in 1932, in recognition of his outstanding scientific achievements. It is interesting to recall that he was originally intended for the engineering profession.

He was born at Cheetham, Manchester, in 1856, and when he was fourteen it was decided to apprentice him at Messrs. Sharp, Stewart and Company's locomotive works in Glasgow. [Note: Manchester, not Glasgow. Sharp, Stewart's move to Glasgow did not take place until 1888]. The firm, however, had a long waiting list, and he was sent meanwhile to Owens College, Manchester, where his interest in physics was first stimulated. Actually he remained for five years at the college, during which time he determined to work for a scholarship to enable him to go to Cambridge. In 1876 he was successful, and in that year he began his connection with Trinity College, Cambridge, which was broken only by his death. He graduated second wrangler in 1880. Immediately afterwards he began work on a dissertation for the fellowship examination, choosing as his subject the nature of energy. In this examination he was successful at the first attempt.

In 1882 he was appointed to an assistant lectureship in mathematics, and about the same time he began a mathematical investigation on moving charges of electricity. At this period he made his acquaintance with the Cavendish laboratory, which was to endure for so many years. He was elected to a University Lectureship in 1883, and was chiefly concerned with electrostatics and electromagnetism, as well as dynamics and statics. In the following year he became a Fellow of the Royal Society, and shortly afterwards, when still only twenty-eight, he received the high honour of election as Cavendish Professor of Experimental Physics in succession to Lord Rayleigh. He was then able to begin his long series of investigations on the passage of electricity through gases, on the findings of which his fame chiefly rests; indeed, that field of research continued to interest him for the rest of his life. It was in 1897 that he put forward the electronic theory of the constitution of matter which revolutionized existing concepts and opened a vast field of research for which he was peculiarly suited.

It is difficult to assess the extent to which his discoveries influenced science as a whole; but it can be safely said that optics, thermionics, radioactivity, magnetism, and spectroscopy all took on new aspects in the light of his researches. The extent of his work is indicated in the six books which he wrote between 1893 and 1913, chiefly dealing with electrical discharges through gases. He also recorded his reminiscences in a lively and entertaining book, "Recollections and Reflections", published in 1937. In 1908 he was knighted and later received the Order of Merit; at the time of his death he was senior civil member of the Order. He began his long association with the Royal Institution in 1905, when he was appointed professor of physics there, and in the same year he received the Nobel Prize for physics.

He also supported the British Association over a great number of years; he was president of Section A in 1896 and again in 1931, and president of the Association itself in 1909. He continued to be a very active member of the Royal Society, and was its president from 1915 to 1920. During the war of 1914-18 he served on the Board of Invention and Research instituted by the Admiralty to devise means of detecting submarines, and to carry out other investigations into aeronautics, marine engineering, antiaircraft defences and similar matters. He was also much interested in the formation of the Department of Scientific and Industrial Research, and served on the Advisory Committee of that body from its inception until 1927.

But it was to Trinity College, Cambridge, that he felt he belonged, and with which he maintained unbroken connection. He was appointed by the Crown in 1918 to succeed Dr. Butler as Master; this necessitated his resigning his Cavendish professorship, as well as his professorship at the Royal Institution, but in each case, however, he retained the rank of honorary professor.

He held the position of Master of Trinity College, Cambridge, until his death, which occurred on 30th August 1940, and, as a token that the value of his work to the nation was publicly recognized, he was buried in Westminster Abbey.