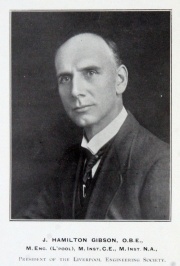 1898 Engineer of Egremont, Chester, gained a patent with Restal Ratsey Bevis, on "improvements in double beat or equilibrium valves".

IT is with deep regret that we have to record the death of Mr. J. Hamilton Gibson, of 91, Belmont Avenue, Cockfosters, Herts, which occurred on Thursday, June 4th, at Victoria Hospital, Barnet. Mr. Gibson had suffered from ill-health for about a year and had undergone several operations; his recovery was expected, but weakness intervened, and he died peacefully on Thursday last week. He will be long remembered as a marine engineer of ability, who in his long career saw the propulsion of ships change from compound to triple-expansion engines, the introduction of the quadruple-expansion engine, the steam turbine, with the direct and geared drive, and the change from the cylindrical boiler to the water-tube marine boiler, and the later forced-feed systems.

Hamilton Gibson was seventy-three years of age. He received his education at the Liverpool School of Science, and was apprenticed to the firm of Laird Brothers, of Birkenhead.

On completing his shop experience he entered the engineering drawing-office, where after some years he was given charge of the completion and trials of ships. For seven years he held the post of chief of the engine drawing and design office, after which he was appointed assistant engineer manager.

In 1910 he became engineer manager to the firm, which in the meantime had become Cammell Laird and Co., Ltd. During his long years of service at Birkenhead he was responsible for the design and construction of many interesting ships and the installations of marine and auxiliary propelling machinery. Outstanding ships which left the Birkenhead yard during these years included the 25-knot scouts of 1903 and 1904, the torpedo-boat destroyer H.M.S. "Swift," the interesting ice-breaker and train ferry "Leonard," built for the Transcontinental Railway Company of Canada, with its adjustable platform, raised and lowered by worm gearing; the battleship H.M.S. "Audacious," and numerous flotilla leaders, destroyers and submarines, as well as cross-channel ships and cargo and passenger liners for British and foreign owners.

As an inventor, Mr. Hamilton Gibson was associated with several important improvements. These included new gear generating and cutting machines, the flexible-seated high-pressure steam valve, the high-lift safety valve, and a torsion meter for the measurement of the horsepower transmitted in propeller shafting driven by steam turbines. He fitted the first Michell thrust blocks to be used for marine purpose, and at a later date he carried out a valuable series of experiments on the use of journal bearings of the Michell pattern, which resulted in the adoption of this type of propeller shaft bearing in many naval and large passenger liner.

In November, 1920, Mr. Gibson resigned his position with Cammell Laird and Co., Ltd., and set up a consulting practice in Liverpool and London. In recognition of his services to marine engineering, the Honorary Degree of Master of Engineering was conferred upon him by the University of Liverpool. He was a Whitworth Exhibitioner, and took a keen interest in the activities of the Whitworth Society. In addition to his consulting practice, he was appointed technical adviser to Michell Bearings, Ltd., of South Benwell, Newcastle-upon-Tyne, and London representative of the firm, a position which he continued to hold until his death. He also represented the firm of C. P. Parry, Ltd., which specialises in the design and installation of soot blowers, and was a pioneer in the steam cleaning of boilers under load.

Hamilton Gibson was a member of several Government and technical committees. He was a Board of Trade Commissioner for Boiler Explosions Inquiries, and a member of the Consultative Committee of Shipbuilders and Engineers appointed to confer with the Marine Department of the Board of Trade, in which capacity he represented the Institution of Naval Architects. He also did much work for the British Standards Institution, and served on several of its committees during the strenuous years of its early work. Other committees on which he served were the Propeller Erosion Committee of Inquiry, and the British Marine Engineering Design and Construction Committee. He found time to attend the meetings of and read papers before several scientific and technical societies and institutions. He was a Past-President of the Liverpool Engineering Society, a Member of Council of the Institution of Naval Architects, a member of the Institution of Civil Engineers, and member of the Institute of Metals and the Institute of Marine Engineers.

He contributed frequently to the technical Press, and in particular his articles on steam marine engineering in the Annual Review of our contemporary, The Journal of Commerce, were always read with the greatest interest. His death will be keenly felt in marine engineering circles, where he was always regarded as an outstanding worker.