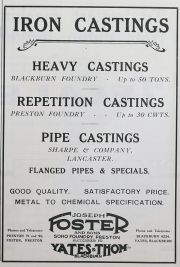 1886 Soho Foundry of Preston was bought (presumably from Joseph Clayton and Sons‎?)

1891 'LOCAL ENGINEERING WORKS. TRIPLE EXPANSION ENGINES.
Some forty years ago there were several large iron works or foundries in Preston, employing hundreds of hands, and capable of turning out Workmanship which held its own with that produced by other towns. But the Tomlinsons, and the Grundys, and the Sleddons, and the Claytons, from various causes retired from the business, aud the trade for a time appeared to languish as large engineering works sprung up at Blackburn and Bolton. Then came the launching of the Preston Wagon Works. The stoppage of that concern, and the disaster it brought to hundreds of workmen's homes will not soon be forgotten. But of late years the iron trade has been an appreciable quantity in the annals of Preston industrips, and we have Foster's, Stephenson's, WVhitehead's, Dryden's, Booth's, Atherton's, Coulthard's, Monk's, Gregson's, and others. .... But at most of our local iron-works there is an abundance of skill and enterprise, and perhaps at none more so than at the extensive concern owned by Messrs. Joseph Foster and Sons (successors to the late Mr. Joseph Clayton), of Soho Foundry and Bow-lane Ironworks.
At the Soho Foundry, on Saturday afternoon, a party of about ninety (mostly members of the Preston and District Branch of the National Engineers' Association) met, by permission of the firm, to inspect, in course of construction, a new type of beam engine on the triple expansion principle, and high pressure boilers. Among those present were representatives from the following local firms ....The engine in course of construction in the erecting shop has been designed by Mr. J. H. Tattersall, consulting engineer of this town. According to the explanation given it appears that in view of the increasing steamn pressure rapidly becomuing general, triple expansion engines are coming in vogue. The engine is a new type of beam engine, the high and low pressure cylinders being applied to the beam after the McNaught principle, and the intermediate and low pressure cylinder after the Woolf principle, the two principles being combined, the result being a well-balanced engine. The cylinders being close together, there is little external radiation or internal condensation, and very little space for idle expansion of the steam betweenthe ports in the cvlinders. The H.P. cylinder is 16in. diameter by 2ft. 6in. stroke, the I.P. cylinder 22in. diameter by 3ft. 4in. stroke, and the L.P. cylinder 30in. diameter by 5ft. stroke. The steam pressure is 165lbs. absolute, to be cut off at 12in. of the H.P. stroke ; terminal pressure in the L.P. cylinder about 7lbs. above zero; and the horse power about 230 indicated. The fly-wheel is 17ft. 6in. diameter, with eight arms, receiving a ring of toothed segments 14ft. diameter; the teeth are 2.9 pitch and 8 1/2in. long. The boiler is of the Lancashire type, 3Oft. long, 7ft. 6in. diameter, with two flues 3ft. diameter, suitable for 150lbs. working pressure, and made throughout of the best Siemens Martin mild steel boiler-plates. During a short explanatory address, Mr. TATTERSALL remarked that the triple expansion prineiple had been applied to marine engines on the great Atlantic liners for some years, and he was of opinion that the principle would in future become more general. That engine was, he believed, the second of its kind in this country, and the first in this district. The engine is to be placed in Kent-street Mills (owned by Messrs. Rushton Blackburn), Hague (Blackburn), and Taylor (Oldham), and tenanted by Messrs. Liver Bros.
Afterwards, the head of the firm (Mr. Joseph Foster), conducted the party through the various departments of the extensive concern, and courteously explained various works in progress. Among these were:- Pair of high pressure horizontal engines, cylinders 24in. diameter, 42in. stroke, with large rope driving wheel 20ft. diameter, 17 ropes (finished), rope driving pulleys, &c.; large tubular cooling cylinders for chemical works; valve boxes for blowing engines for ditto; plug tap with water circulating through plug and body for chemical works ; internal spur wheel 24ft. diameter for water wheel ; boiler fittings, fronts, stop valves, &c,; fireproof doors, &c. ; shafting, bearings, &c.; large machine for engine work, to plane 12ft. broad, 10ft. high, and 30ft. long, planing edge of boiler plate 27ft. long; plate planing machine planing boiler plate; flue turning and drilling machine; boiler front 9ft. diameter with all holes drilled; hydraulic riveting machine riveting shell of 7ft. boiler; bending rolls, bending shell plate 27ft. long, 4ft. wide, 11-16in, thick, weight 27 cwts., at one operation; one high pressure Lancashire boiler 30ft. long, 8ft. 6in. diameter for a working pressure of 140lbs. per square inch - tested to 240lbs. per square inch for Sir Titus Salt, Sons, and Co., Ltd., Saltaire (finished) ; another in course of construction; shell drilling machine drilling six holes at one time through rings in position; flue flanging machine, &c. .....'[1]

1907 'KIRKHAM'S NEW MILL.
Completion of Building Operations.
Engine Naming Ceremony.
On Wednesday afternoon the splendid engines belonging to the Kirkham and Wesham Room and Power Company were named by Mrs. James Ogden, wife of the chairman of directors, the event marking the conclusion of building operations. .... Mr. J. H. Foster, of Messrs. Joseph Foster and Sons, Preston, gave the following detailed description of the engines. They are a pair of the horizontal Corliss cross compound condensing type suitable for running with a boiler pressure of 175 lb. to the square inch. The cylinders are 17 and 38 inches diameter respectively, with a stroke of 4ft. 6in., each being fitted with Corliss valves operated by Foster's improved trip gear, the high pressure being actuated by the improved quick speeded compensating governor in order to vary the "cut off" according to the speed of the engine, the knock off tackle is also provided and works in such a manner as to completely stop the engine automatically in case of any severe variation of speed one way or the other from the normal, or in case of accidents.
600 Horse-power Engine
The engine is made to develop 600 indicated horse-power when running at a speed of 60 revolutions per minute, the flywheel rope pulley to transmit power to a second motion pulley and shaft, being 18ft. diameter and grooved for seventeen 1 3/4" ropes. It is provided on the inner side of its rim with a circular rack into which works the pinion of a 20-h.p. barring engine in such a manner as to bring the large engine into a suitable starting position.
The barring engine is provided with an automatic disengaging gear, so that upon tho velocity of the fly wheel of the large engine becoming greater than that of the barring engine, the latter disengages itself from the large fly wheel, and at the same time stops the barring engine.
The air pump and condenser is of the horizontal double acting type, and worked from the tail rod of tho h.p. cylinder. ...'[2]

1930 'HUGE CASTING. BLACKBURN FIRM'S SUCCESSFUL START ON DIFFICULT TASK.
Blackburn has just turned out its largest casting through Messrs. Joseph Foster and Sons, Canal Foundry, successors to Messrs. Yates and Thom. It was the first of four quarter segments cast for the rotor of huge electric generator being built by the British Electric Co. Preston for a well-known British steel firm.
The four segments together weigh about 115 tons. For the first segment the workmen used three large ladles, two containing over 16 tons of molten iron, and the third about six tons. The delicate operation was carried out in two minutes without hitch.
The order for the rotor was placed a fortnight ago and a guarantee of quick delivery was the means of bringing the order to Blackburn. Over 400 men are now employed at Canal Foundry on home and foreign orders, and on this work the firm will be fully engaged for four or five months. [4]