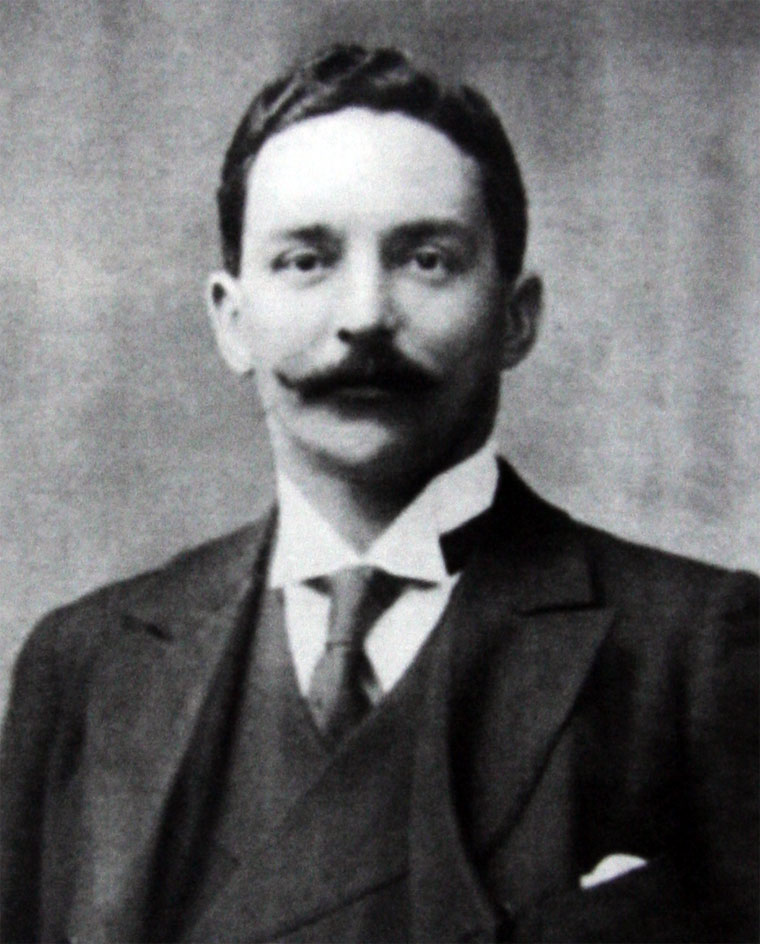 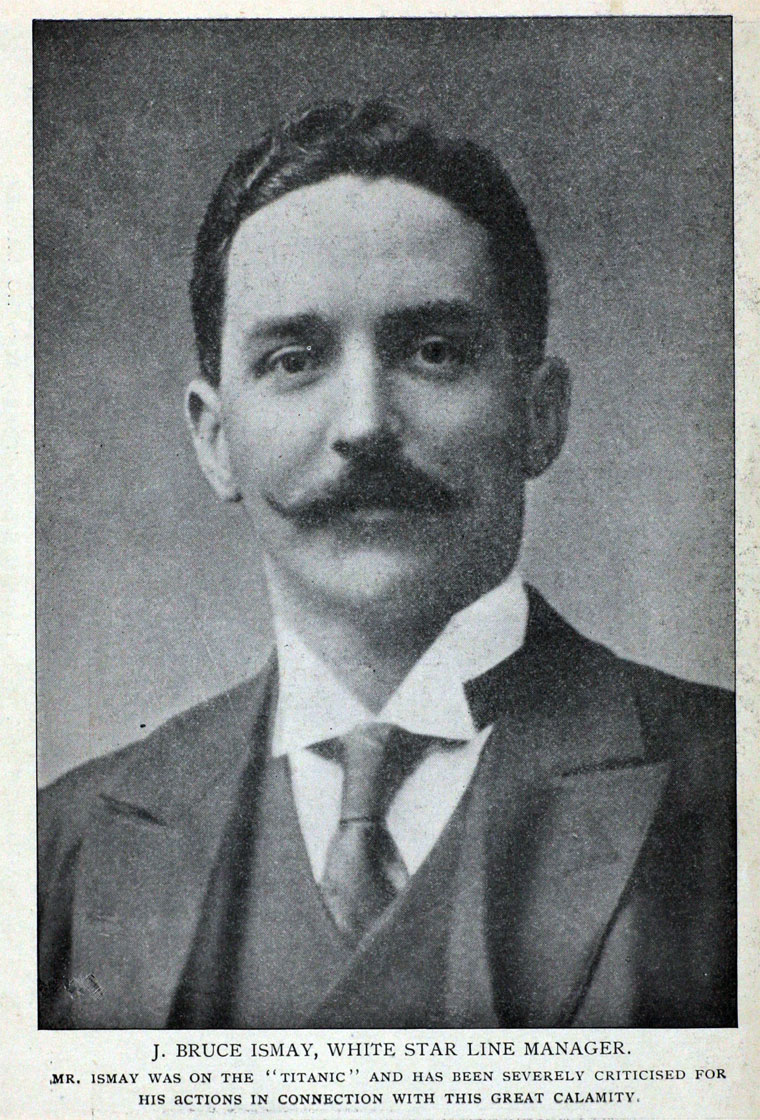 He came to international attention as the highest-ranking White Star official among the 712 survivors (vs. 1,496 fatalities from crew and passengers) of the maiden voyage of his company's marquee ocean liner, the RMS Titanic.

The younger Ismay was educated at Elstree School and Harrow, then tutored in France for a year. He was apprenticed at his father's office for four years, after which he toured the world. He then went to New York City as the company representative, eventually rising to the rank of agent.

1891 Ismay returned with his family to the UK and became a partner in his father's firm, Ismay, Imrie and Company.

1899 Thomas Ismay died, and Bruce Ismay became head of the family business. Ismay had a head for business, and the White Star Line flourished under his leadership. In addition to running his ship business, Ismay also served as a director of several other companies.

He decided to build four ocean liners to surpass the RMS Oceanic built by his father: the ships were dubbed the Big Four: RMS Celtic, RMS Cedric, RMS Baltic, and RMS Adriatic. These vessels were designed more for luxury and for speed than safety.

1901 he was approached by a group of Americans who wished to build an international shipping conglomerate - they agreed to merge his firm into the International Mercantile Marine Company, an Atlantic shipping combine which absorbed several major American and British lines.

1902 Ismay negotiated the sale of the White Star Line to J. P. Morgan & Co., which was organising the formation of International Mercantile Marine Company (IMM). IMM was a holding company that controlled subsidiary operating companies. Morgan hoped to dominate transatlantic shipping through interlocking directorates and contractual arrangements with the railroads, but that proved impossible because of the unscheduled nature of sea transport, American anti-trust legislation, and an agreement with the British government. White Star Lines became one of the IMM operating companies and, in February 1904, Ismay became president of the IMM, with the support of Morgan.

1907 Ismay met W. J. Pirrie of the Harland and Wolff shipyard to discuss White Star's answer to the RMS Lusitania and the RMS Mauretania, the recently unveiled marvels of their chief competitor, Cunard Line. Ismay's new type of ship would not be as fast as their competitors, but it would have huge steerage capacity and luxury unparalleled in the history of ocean-going steamships. The latter feature was largely meant to attract the wealthy and the prosperous middle class. To accommodate the luxurious features Ismay ordered the number of lifeboats reduced from 48 to 16, the latter being the minimum allowed by the Board of Trade, based on the Titanic's projected tonnage. Three ships of the Olympic Class were planned and built; the second was the RMS Titanic, which began its maiden voyage from Southampton to New York City, on 10 April 1912. The first and third ships of this class were the RMS Olympic and RMS Britannic.

Ismay occasionally accompanied his ships on their maiden voyages - the Titanic was one of these. During the voyage, Ismay talked with either (or possibly both) chief engineer Joseph Bell or Captain Edward Smith about a possible test of speed if time permitted. When the ship hit an iceberg 400 miles south of the Grand Banks of Newfoundland and started sinking on the night of 14 April 1912, Ismay was rescued in Collapsible Lifeboat C. He testified that as the ship was in her final moments, he turned away, unable to watch his creation sink beneath the waters of the North Atlantic. He was taken aboard the Cunard liner RMS Carpathia and arrived in New York on 18 April.

Ismay later testified at the Titanic disaster inquiry hearings held by both the U.S. Senate (chaired by Senator William Alden Smith) the following day, and the British Board of Trade (chaired by Lord Mersey) a few weeks later.

After being picked up by the Carpathia, Ismay was led to the cabin belonging to the ship's doctor, Frank Mcgee. He gives Captain Rostron a message to send to White Star's New York office: "Deeply regret advise you Titanic sank this morning after collision with iceberg, resulting in serious loss of life. Full particulars later." Ismay would not leave Dr. Mcgee's cabin for the entire journey, ate nothing solid, and was kept under the influence of opiates. Fellow survivor Jack Thayer visited Ismay to try to console him.

"Ismay was staring straight ahead, shaking like a leaf. Even when I spoke to him, he paid absolutely no attention. I have never seen a man so completely wrecked." — Jack Thayer, First Class passenger on Titanic

When he arrived in New York, Ismay was hosted by Philip Franklin, vice president of the company. He also received a summons to appear before a Senate committee headed by Republican Senator William Alden Smith.

After the disaster, Ismay was savaged by both the American and the British press for deserting the ship while women and children were still on board. Some papers called him the "Coward of the Titanic" or "J. Brute Ismay" and suggested that the White Star flag be changed to a yellow liver. Some ran negative cartoons depicting him deserting the ship. The writer Ben Hecht, then a young newspaperman in Chicago, wrote a scathing poem contrasting the actions of Capt. Smith and Ismay. The final verse reads: "To hold your place in the ghastly face of death on the sea at night is a seaman's job, but to flee with the mob, is an owner's noble right."

Some maintain that Ismay followed the "women and children first" principle, having assisted many women and children himself. He and first-class passenger William Carter said they boarded Collapsible C after there were no more women and children near that particular lifeboat. Carter's own behaviour and reliability, however, were criticised by Mrs. Carter, who sued him for divorce in 1914; she testified Carter had left her and their children to fend for themselves after the crash and accused him of "cruel and barbarous treatment and indignities to the person." London society ostracised Ismay and labelled him one of the biggest cowards in history. Strong negative press came particularly from newspapers owned by William Randolph Hearst, who some claimed fostered a personal vendetta. On 30 June 1913, Ismay resigned as president of International Mercantile Marine and chairman of the White Star Line, to be succeeded by Harold Sanderson.

Ismay announced during the United States Inquiry that all the vessels of the International Mercantile Marine Company would be equipped with lifeboats in sufficient numbers for all passengers. Following the inquiry, Ismay and the surviving officers of the ship returned to England aboard RMS Adriatic. Ismay's reputation was irreparably damaged and he maintained a low public profile after the disaster. He did maintain an interest in maritime affairs. He inaugurated a cadet ship called Mersey used to train officers for Britain's Merchant Navy, donated £11,000 to start a fund for lost seamen, and in 1919 gave £25,000 to set up a fund to recognise the contribution of merchant mariners in World War I.

Ismay kept out of the public eye for most of the remainder of his life. He retired from active affairs in the mid-1920s, and settled with his wife in a large 'cottage', Costelloe Lodge, near Costelloe in Connemara, County Galway, Ireland. His health declined in the 1930s, following a diagnosis of diabetes, which took a turn for the worse in early 1936, when the illness resulted in amputation of part of his right leg.

He returned to England a few months later, settling in a small house on the Wirral across the River Mersey from Liverpool.

1937 J. Bruce Ismay died in Mayfair, London, on 17 October 1937, of a cerebral thrombosis (stroke), at the age of 74. His funeral was held on 21 October 1937, and he is buried in Putney Vale Cemetery, London. He was survived by his wife, Florence Schieffelin.

After his death, his wife renounced her British subject status in order to regain her American citizenship on 14 November 1949. Julia Florence Ismay, née Schieffelin, died 31 December 1963, aged 92, in Kensington, London.