Jones and Co (of Ashton under Lyne) 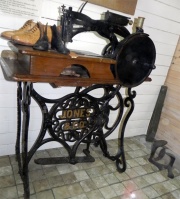 Around 1858 William Jones became fascinated in the new sewing machines that were coming across from America. At the time William and his brother had a small engineering plant that made steam engines to power factory equipment such as pumps, lathes, jigs and other machinery of the period.

By 1859, William Jones started to manufacture, under licence, the Howe and Wheeler and Wilson machines - see William Jones

The Jones Long Shuttle Lockstitch was a Howe machine but later William started to manufacture his own models.

William went into partnership with Thomas Chadwick, one of the pioneers of early British sewing machines. Chadwick was one of the strikers at the Platt Brothers Engineering Works in Oldham. They formed the Chadwick and Jones Co. They operated from a factory at Ashton-Under-Lyne.

Three years later the partnership was dissolved. Chadwick, who already had the bitter taste from a former failed partnership, went off to Bradbury Sewing Machines, William’s greatest rival.

By 1869, they had patented their own machines and obtained a large contract for Burtons the tailors (NB unclear as to whom this refers as Montague Burton did not set up in business until 20th century) to supply heavy-duty industrial machines to some of their factories. The successes of their domestic and industrial machines lead to their small business growing quickly

William and his brother went on to make some superb sewing machines, many of which still survive to this day. They copied popular machines of the day like Singers New Family machine and the German transverse shuttle machines and added their own unique models like the Cat Back.

They built a factory at Shepley Street, Guide Bridge, near Audenshaw, on the outskirts of Manchester. At the Stamford Works factory they employed thousands of workmen and the machines became a household name in Britain

The Jones Company went on to produce many different models for over 120 years. If you ordered more than 100 machines you could have your own name put on the machine. This is something that Singers never did. This is why so many Jones machines turn up in different dresses.

Out of all the Jones models, probably the one that is the most synonymous with Jones, is the family model known as the Serpentine, due to the sweep of the neck matching a bend in the famous London lake.

During WWII the Jones factory carried on producing sewing machines for the war effort but also produced uniforms and parachutes.

The Jones sewing machine company is one of the oldest sewing machine companies in the world and although the Jones name disappeared from sewing machines in the late 1980’s Jones still survives and is now part of the Japanese Brother Industries who were originally famous for their superb hand built pianos and now make a huge range of domestic and industrial machinery, everything from computers to keyboards.

Many sewing machine patents at about this time were in the name of John Thomas Jones. That person does not seem to be connected with this company as the address is given as Illion, New York State[1]