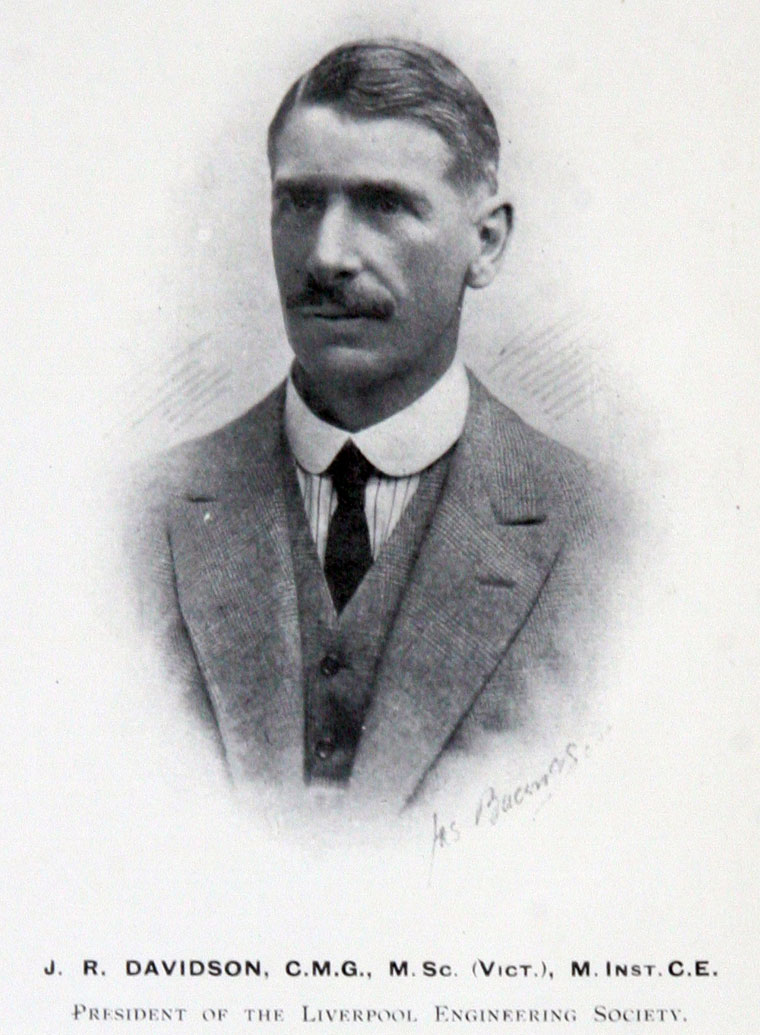 Educated at Beaumaris Grammar School, he studied engineering at University college, Liverpool. He graduated B.Sc. with honours in 1895, and in 1898 was awarded the M.Sc.

From 1895-98 he received his practical training as a pupil under Mr Joseph Parry, M.I.C.E., Chief Engineer to the Liverpool Corporation Waterworks. During his pupilage, among other work, he set out the line and levels for a new tunnel-aqueduct l.25 mile long, from the River Cownwy to Lake Vyrnwy in North Wales, and later, as Assistant Engineer, he supervised the tunnelling work and the laying down of ventilating plant and machinery. On completion of his pupilage he was appointed to the Corporation staff as Resident Engineer on the Rivington works comprising large catchment reservoirs, filter beds, and a 44in. trunk main to Prescot.

From 1902-4 he was Resident Engineer of the Norton-Prescot section of the Vyrnway supply scheme.

In 1905 he became Principal Assistant Engineer for Rivington, Vyrnway, and the Corporation’s new works, and in 1914 he was appointed Chief Engineer, Liverpool Corporation Waterworks.

During World War I he served with great distinction on the Somme and at Ypres, commanding the 1st Battalion, the Liverpool Scottish Regiment for three years, gaining three mentions in dispatches, and being created C.M.G. in 1915. He was released from military duty on petition of the Liverpool Corporation on account of the urgency of large extensions to the Vymwy supply.

On his retirement in 1934 he accepted a 5-year contract as Chief Engineer, Metropolitan Water Board, but the Board retained his services until 1949 to supervise, among other projects, the construction of Staines and Chingford reservoirs, the reconstruction of Hampton Works and the winding up of the contract for Walton reservoir which had been held up by World War II.

Sir Jonathan played a leading role in engineering throughout his life and served on many Government committees. He was a member of the Executive Committee of the British Waterworks Association for several years during which he was Chairman of the Water Regulations Committee. He was also a member of Council of the Institution of Water Engineers.

In 1936 he was elected to the Council of the Institution of Civil Engineers, becoming President in 1948. He was knighted in 1942.

Elected an Associate Member in 1900, he was transferred to the class of Members in 1919.

Sir Jonathan Davidson is survived by his widow and three sons.

COLONEL SIR JONATHAN ROBERTS DAVIDSON died on June 21 ; he was eighty-seven. He was well known as chief engineer of the Metropolitan Water Board for the five years immediately prior to the last war.

Sir Jonathan received his academic education at Victoria University, Liverpool. By 1914 he had gained sufficient prominence in the profession of water engineering to be awarded the post of chief engineer of Liverpool Corporation Water Works. With the advent of the first world war, however, he did not take up this post, as he served as an officer in the Territorials. He commanded the first battalion, the Liverpool Scottish Regiment, and was thrice mentioned in dispatches, and was awarded the C.M.G. in 1915. Later, he was invalided out of the army, and subsequently he took charge of the Liverpool Water Works. He remained chief engineer at Liverpool until 1934, during which period the third instalment of the Vyrnwy aqueduct was commenced under his direction, and the South trunk main was constructed in the city.

It was in his capacity of chief engineer of the Metropolitan Water Board, however, that Sir Jonathan was responsible for the most ambitious works of his career. The Board's Hampton works was remodelled under his direction, with a completely new pumping station and rapid gravity filtration plant of 120 m.g.d. capacity. Then there were the Walton and Staines reservoirs, the latter named the King George VI reservoir on its inauguration in 1947, and in the Lee valley, the largest of the group of reservoirs there, now known as the William Girling reservoir. Although Sir Jonathan retired from the position of the Board's chief engineer in 1939, he continued to be responsible to the Board for a further ten years for the construction of the major new works mentioned above. Sir Jonathan received his knighthood in 1942, and in 1948 he became President of the Institution of Civil Engineers. There can be few engineers who have left for the benefit of the community such vast works of unsullied usefulness as those for which Sir Jonathan was responsible in London.