(Redirected from Johnson, Mathey and Co)
Jump to: navigation, search 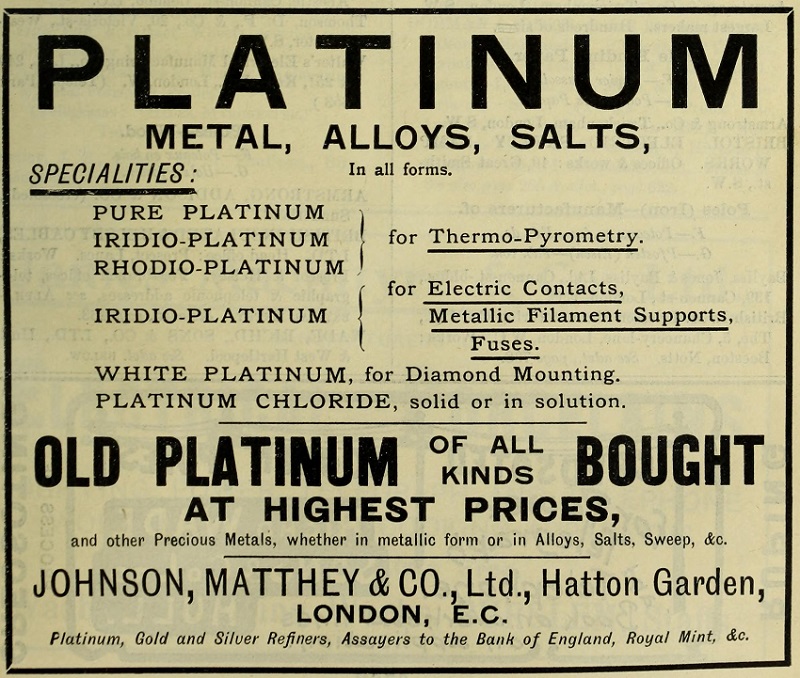 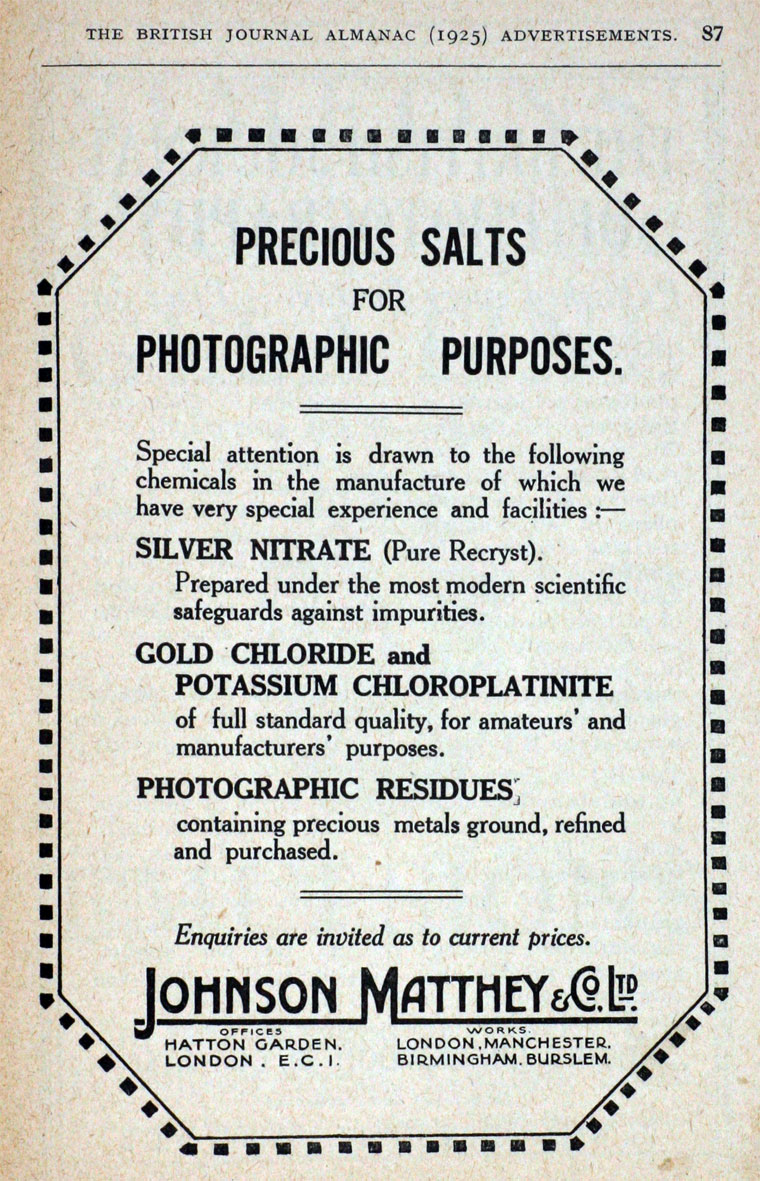 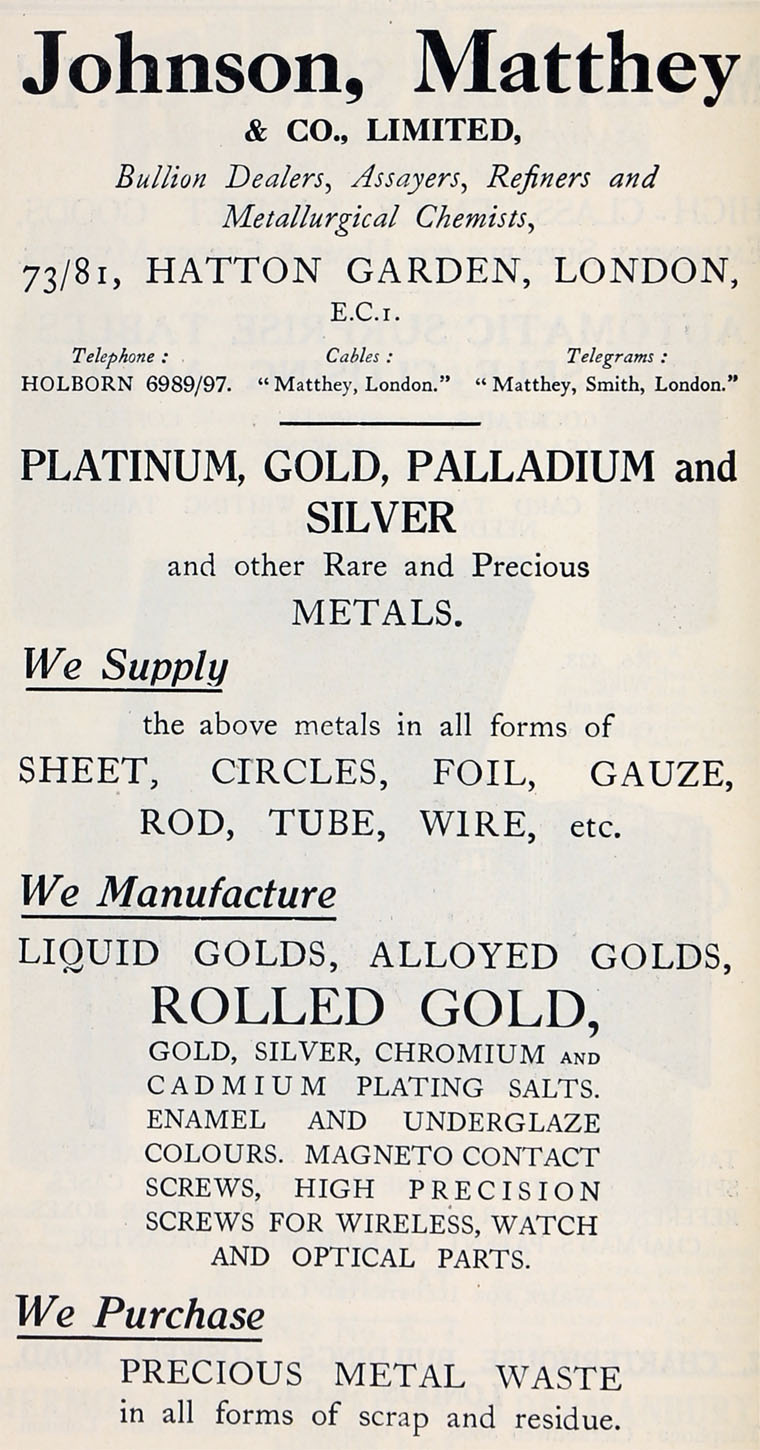 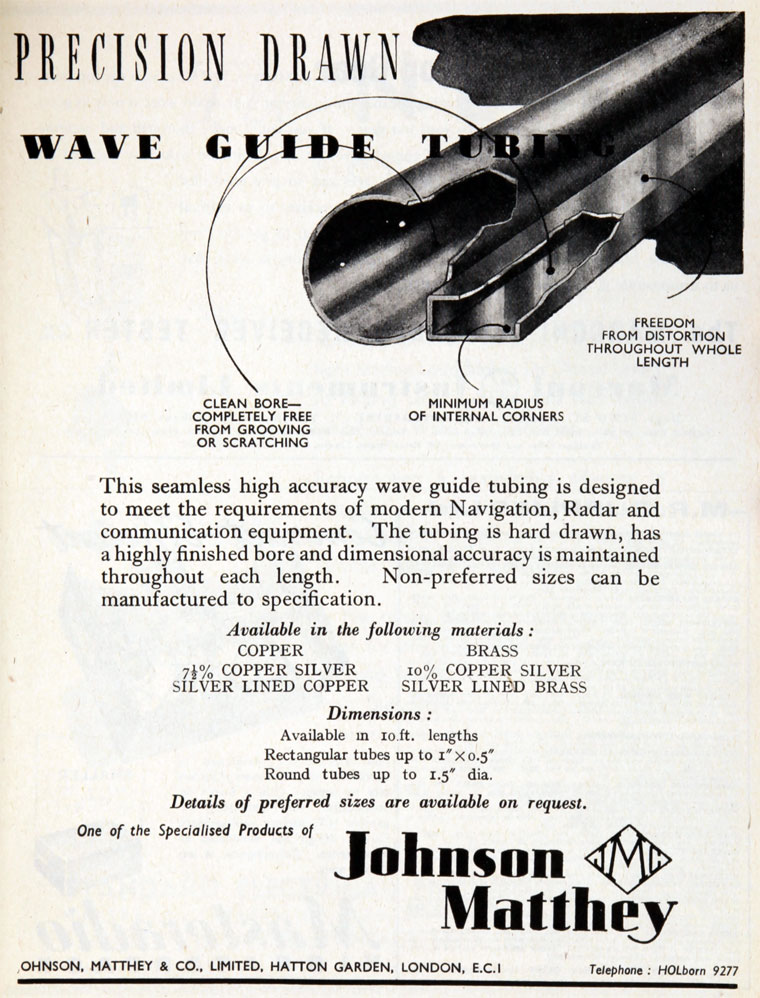 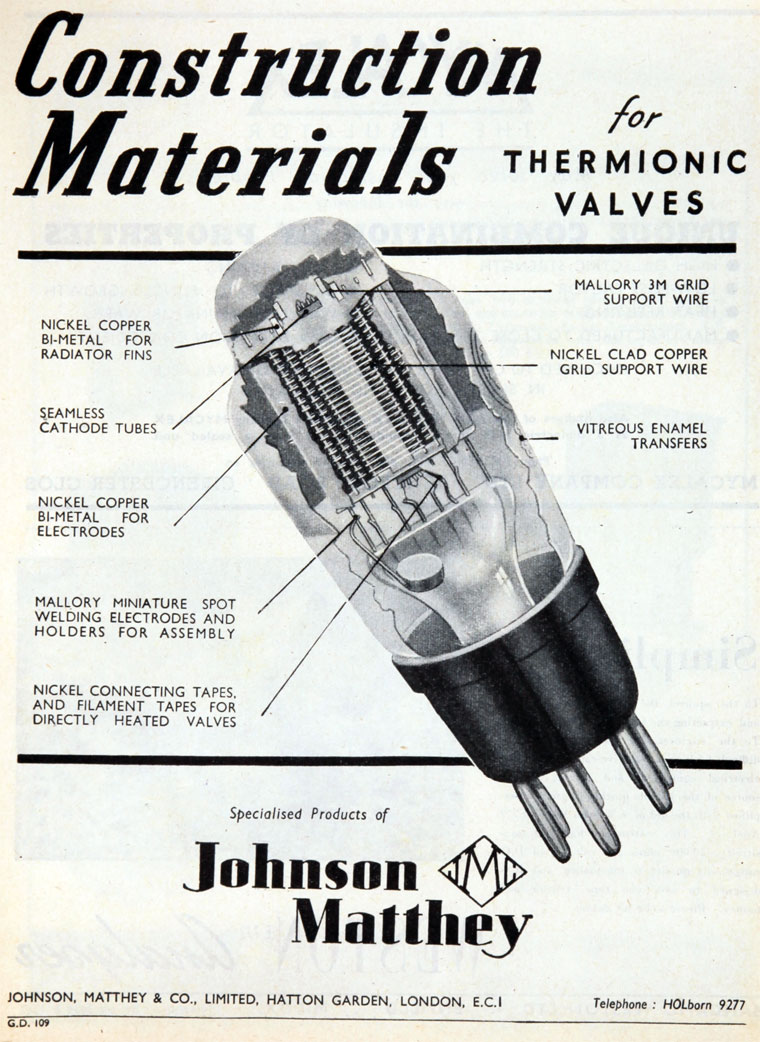 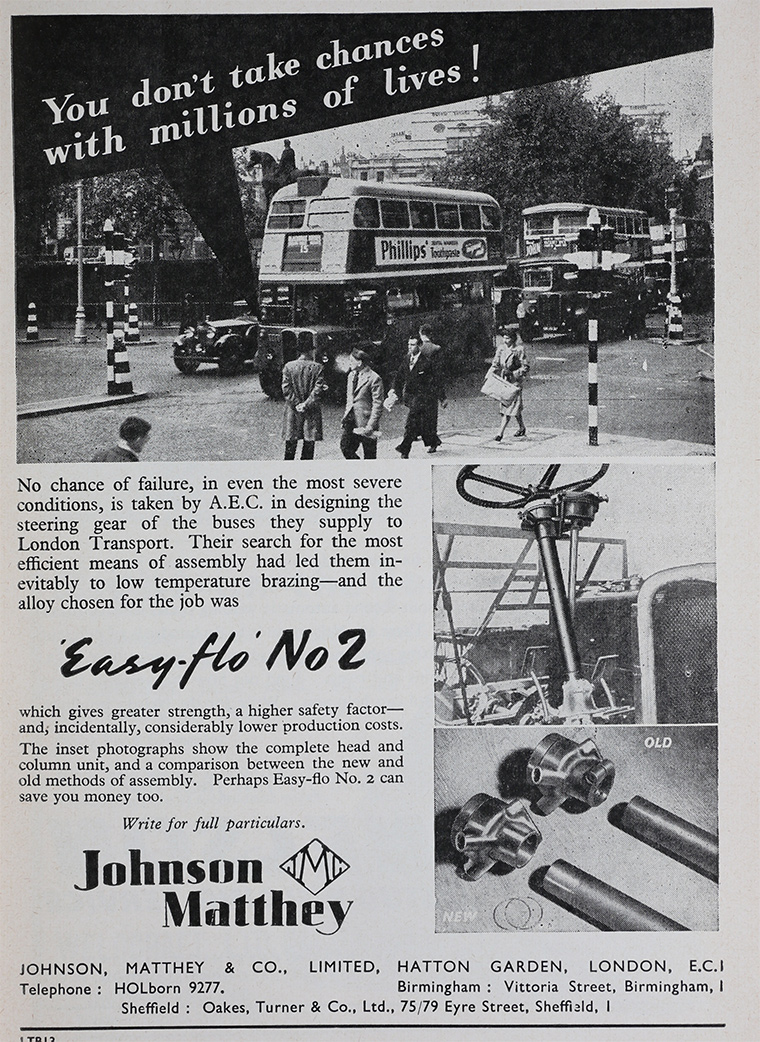 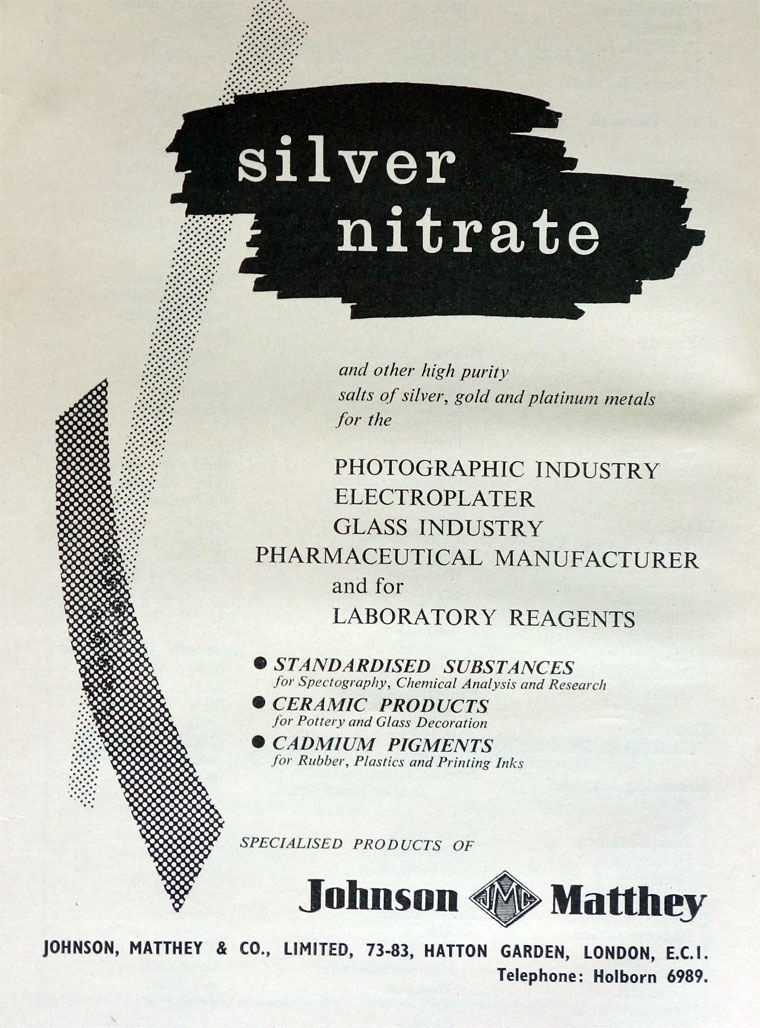 of Royston, Hertfordshire and Pennsylvania, USA.(1974)

1832 Johnson took George Stokes into partnership and the business then became known as Johnson and Stokes.

1837 Johnson then took W. J. Cock into partnership and the company became known as Johnson and Cock.

1852 Johnson and Matthey was appointed Official Assayers and Refiners to the Bank of England. The company had branches in Birmingham and Sheffield to supply the jewellery and silverware and cutlery trade with raw materials and ancillary supplies, such as silver solder and flux, which it manufactured.

1861 Johnson, Matthey and Co were approved as refiners to the Bank of England.

1867 At the Paris Exhibition, Johnson Matthey were awarded two gold medals for their fine display of refined and fabricated platinum.

1874 The company produced the first standard metre and weights in iridium-platinum for the international Metric Commission.

1891 Public company. In April the firm became a limited company - Johnson, Matthey and Company Limited. The company was registered on 11 April, to acquire the business of assayers and refiners of the firm of the same name. [1]

1901 Preference shares were listed on the London Stock Exchange.

1919 Acquired Johnson, Matthey and Co Inc of USA; (and a Birmingham Branch?) and possibly at Hadyn Park Works, Hammersmith, as planning records show them there in 1948 and 1952

1928 Johnson, Matthey and Co patented the only workable process for extracting and refining of platinum group metals from the South African ores.

1938 Research and Development laboratories were built in Wembley and some mechanical production operations were relocated from London.

1946 The company won exclusive contracts for the refining of British demonitised silver coinage.

1961 Refiners of gold, silver and metals of the platinum groups, manufacturers of precious metals, salts, sheet and components, ceramic, enamel and transfers. 5,000 employees. [6]

1999 Sale of the Electronic Materials Division

2004 Sale of Pigments and Dispersions business