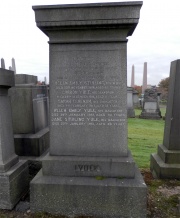 Although the sad event was announced in the usual way on Wednesday last, many of our readers will doubtless now learn for the first time of the death of Mr John Yule of the Hutchesontown Engine Works, Rutherglen Loan, a gentleman who long since had made his impression upon the engineering practice of this great seat of the mechanical arts, and had gained an excellent reputation as a very skilful and a thoroughgoing practical engineer.

The son of Mr Richard Yule, of Edinburgh who, in the second year of the century, became connected with the Right Hon. Thomas Lord Dundas as the manager of his famous alkali works at Dalmuir - now no longer in existence - the deceased gentleman was early apprenticed to the business of marine engineering under David Napier, a man of a very kindred spirit, and who is well worthy of being held in remembrance for his most valuable practical contributions to the art of deep-sea steam navigation with that eminent engineer he became such a favourite that when he was only nineteen years of age he was sent by him to the Highlands as the engineer in charge of the steamer "Cupid". The professional training which he received from David Napier in the early years of steam navigation was ever afterwards looked upon by the deceased with feelings of the keenest pleasure and satisfaction.

Like many other engineers of his time, Mr Yule "went the round' of the best shops, in order that he might become acquainted with every branch of engineering work, and study practically the best modes of carrying it out. Not content with simply taking service under David Napier, Robert Napier, and Stark and Fulton, he followed the example of Charles Randolph, the late William Tait, and other contemporaries, by sojourning a while in England.

We are not aware if he wrought any time at Fairbairn's or any other of the famous shops at Leeds or Manchester, but he certainly spent some time in the employment of two well-known engineering firms in those davs - namely, Messrs George Forrester & Co., Vauxhall Foundry, Liverpool and Messrs Rothwell & Co., Bolton. But even prior to going to England he had become intimately acquainted with the locomotive branch of the engineering trade, as he served in a responsible post under Mr John M. Rowan in the Atlas Works, East Milton Street, where some of the earlier forms of the locomotive engine were made, especially the "Boanerges" and the "Borealis," which ran between Glasgow (Glebe Street station) and Slamannan, right through the heart of the coal-field of the Middle Ward of Lanarkshire, as also some of the earliest engines that were employed on the Glasgow and Greenock Railway.

Mr Yule had acquired such an excellent knowledge of locomotive engineering practice, both in Scotland and England, that Mr Thomas Edington, of the Phoenix Foundry offered special inducements to him while he was at Rothwell & Co.'s, Bolton, to become his manager in that branch of his already world-famous business. He forthwith returned to Glasgow and joined the business of Edington & Sons, and one of the earliest pieces of work which he had to carry out was the construction of four locomotive engines for the Ayrshire Railway, in the year 1839 or 1840, when an order was given out for no fewer than a dozen engines, which was certainly a large order so long as 37 years ago. Four of these were given to Stark & Fulton, North Street, Anderston, when the practical business of that well-known firm was under the management of Mr Peter M'Onie, eldest brother of Messrs Wm. & Andrew M'Onie, of Scotland Street Engine Works; and the contract for the other four was let out to Messrs Kinmont, Hutton & Steel, of Dundee.

While acting as manager to Messrs. Edington & Sons, Mr Yule devoted a vast amount of attention to the science and art of his profession, and he became one of the recognised leaders in engineering progress. His inventiveness took various directions, and several practical results of it met with much probation from his contemporaries - indeed, two of them made such an impression upon the master-mind of Mr John Scott Russell, that he was induced by that gentleman to send papers descriptive of them to the Royal Scottish Society of Arts, Mr Scott Russel being the medium of communication.

One of the inventions was a compensation governor for the steam-engine, and the other was an expanding screw-tap, drill, and mandrill, which was deemed so valuable by the engineering members of the society that he was awarded one of the society's silver medals for it. Another invention, which was quite a success, was his rotary engine, an example of which was erected at the Phoenix Iron Works, where it did good service as a prime mover. The construction of a good rotary engine was a problem which many engineers had attacked, but in which few had met with any success that was really worthy of the name.

Mr Yule also tackled the "Will of tho Wisp", problem, known as perpetual motion, as he believed that no engineer was worthy of the name who had not made some attempt to fathom the depth of Nature's laws in reference to force and motion. Of course, he discovered for himself the fact that perpetual motion was a chimera, but he incidentally gained a deep insight into the first principles of mechanical science.

In the course of time Mr Yule entered into business on his own account as a general engineer, for being a sort of "all-round mechanic", he was not at a loss in any department of his profession. He first started in business in Parliamentary Road somewhere about 30 years ago, and after a time he was joined by Mr John Wilkie, the firm then becoming Yule & Wilkie. For a while they did a large amount of work in the construction of iron houses for shipment to Australia during the early portion of the gold fever period with which the Australian colonies were smitten fully a quarter of a century ago.

As their business increased they passed into larger premises in Port-Dundas Road, where they sometimes employed as many as 250 hands. The business of the firm did not prove to be a commercial success, and about 20 years ago it terminated, and the firm broke up.

For a time Mr Yule acted as the a manager of the boiler department of Messrs Robert Napier & Sons' immense engineering business, and to a certain extent got set upon his legs again. Eventually he resumed business on his own account in the Hutchesontown Engine-Works, a somewhat classical establishment, one of his predecessors in it being Claud Girdwood, an engineer whose reputation stood very high, and another John Bourne, who has since become one of the greatest of living authorities on the literature of the steam-engine.

During the last five or six years Mr. Yule was never the same man that he had previously been. He became very much broken down in spirit in consequence of the lamentable disaster which occurred just below Maxwellton Place, on Paisley Road, at the end of 1871. Being always in advance in engineering schemes and in ready mechanical devices for accomplishing them, he devoted much attention to the application of steam-power for traction purposes on the public thoroughfares. He constructed a very powerful traction-engine, which was lent out to engineers, ironfounders, boilermakers, and others, for the purpose of dragging heavy loads along the streets, and especially to vessels in process of being fitted out in the harbour. The boiler, it may be remembered, exploded through some carelessness on the part of the man in charge, and a number of persons who were in the vicinity at the time suffered injuries which proved fatal. Mr Yule did his best to meet the pecuniary obligations that he considered to be morally devolved upon him under the sad circumstances in which he was placed.

He gradually devoted himself less and less to business, and during the last two or three years he ceased almost entirely to keep his works going, largely on account, however, of the dull condition of trade.

There are many worthy movements to which we might refer as illustrations of Mr Yule's great practical skill as a mechanical engineer. Within the last 12 or 15 years he erected two very important swing bridges, one on the plate-girder system, and the other being a lattice girder bridge. The former was erected according to the plans of Messrs Bell & Miller, C.E, of Glasgow, over the entrance to one of the docks at Port Glasgow, in connection with the Caledonian Railway system; and the other was erected over the entrance to Kingston Dock, Glasgow Harbour. Owing to the angle at which the bridge crosses the dock entrance, Mr Yule had some trouble in getting the original design of the bridge worked out in its mechanical details, so that the motions of the structure might be erected with as much ease as possible. But by the introduction of several ingenious devices he fully overcame the difficulty, and in a great measure the bridge was eventually his design as well as his workmanship.

In the construction of steam cranes Mr Yule was long in advance of most of his contemporary engineers, and in that branch of construction he was quite at home. To his credit it may be mentioned that the first steam-worked harbour crane erected at any port in the West of Scotland was made by Mr Yule about thirty years ago. It was a 10-ton coaling crane, and was put up at Troon harbour for the Duke of Portland. It is worthy of remark also that a large proportion of the cranes around the harbour of Glasgow bear the impress of Mr Yule's mechanical mind.

He was equally at home in the construction of steam hammers - indeed, he made the steam hammer trade quite a specialty of his business, having during his professional career manufactured fully 200 such useful machine tools, most of them being on the type which was brought out by Messrs Morrison & Co., of Newcastle-on-Tyne. Nearly a quarter of a century ago, he constructed first steam hammer that was made under the patent of the late Mr Rigby, of the firm of Rigby and Beardmore, Parkhead Forge, Glasgow.

Latterly we may simply mention the incline (..d plane) on the Monkland Canal which was constructed nearly a quarter of century ago is a good example of Mr Yale's work.

In his latter years a Mr Yule did a great deal of professional work as an engineer in Messrs Tod & Macgregor's works and Messrs. J. and G. Thomson's works, amongst others passed through his hands in that category.

Generally Mr Yule had excellent health. This day fortnight, however, he was taken fatally unwell, and on the following Monday death supervened from effusion of blood on the brain. He was sixty-six years of age at his death, and he leaves a widow and a family of two sons and four daughters to mourn his decease.