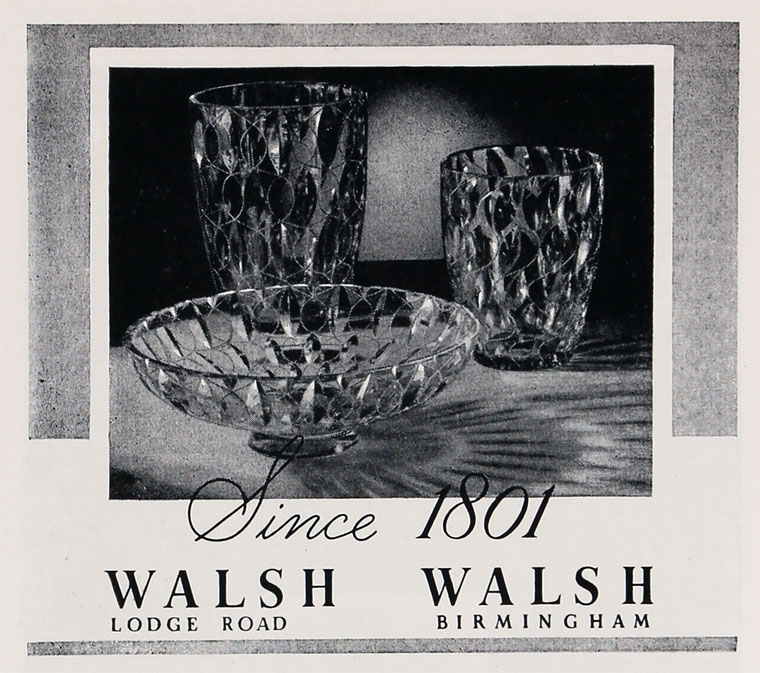 1850 John Walsh Walsh was already well-known as a businessman in Birmingham when he bought an established glass factory in Lodge Road, Winson Green. He claimed that his strange name came about because the sponsors at his baptism were rather nervous and instead of saying just the Christian name John, said John Walsh, which made him John Walsh Walsh for the rest of his life. Church registers of the period, however, do not support his story.

From the outset he insisted on a very high standard of quality and design for the products he introduced. One of the first designs was an inkwell that was mounted on a mahogany plate and surrounded by an ornate decoration in brass sheeting.

1864 John Walsh Walsh died and his executors put the business up for sale. Fortunately it was bought by one of his daughters, Ellen Eliza, and her husband Thomas Ferdinand Walker, who was himself an active Birmingham entrepreneur. The company's future as a family firm was therefore secured.

1879 John Walsh Walsh's son, also named John Walsh Walsh (1849-1879), was also a glass manufacturer; he died at Vesta House, Lodge Road, Birmingham[1], suggesting he had continued to be involved in the business, as was his mother subsequently.

Sometime after 1881 Thomas Walker passed the day-to-day administration over to a manager, Lewis John Murray, who had been in charge of a glass manufacturing factory in Stourbridge.

The product ranges throughout the late Victorian period were vases and flower holders, lampshades, and all types of dining room table glass. Frequently the design of a flower holder was based on individual flowers. Others took the form of novelty items such as palm trees, horse shoes and owls.

Lampshades in many different styles and colour were produced for oil, gas, electricity and candle lighting, with the use of moulded patterns being employed to great effect. The cut glass department concentrated on the production of fine intricate patterns for decanters, wine glasses and fruit bowls. Because many of the designs were fragile and delicate few of these items have survived to the present day.

c.1911 Overall control of the business passed to Philip Walker, a grandson of John Walsh Walsh, until his death in 1923.

WWI The effect of the First World War limited the amount of development work, but a number of novelty items were made in limited quantities. A major introduction in 1912-1915 was a cut glass pattern named Koh-i-noor. This pattern being deeply cut was so unique that it remained a flagship of the company for many years, and was still in production at the time of closure in 1951.

1920s A range of bowls and vases in many shapes and sizes was developed around a delicate shade of yellow. The range was given the name of Primrose. The Kenilworth pattern was introduced in 1925 and gained in popularity as a more reasonably priced and easier-to-cut pattern than Koh-i-noor.

1927 Control passed to William Riley, who had married Catherine Walker the great grand-daughter of John Walsh Walsh. Riley was a qualified professional engineer and under his leadership the company developed into a highly profitable and progressive unit.

1928 a major success was achieved when the First Glass Convention was held in Bournemouth. For this occasion manufacturers were requested to design and manufacture a loving cup to be presented to the Mayor of the Corporation. The Royal Society of Arts selected the Walsh entry as the winner.

1930s William Clyne Farquharson who had joined the company in 1924 became Chief Designer in the early 1930's and developed his now highly collectible range of designs. A major reconstruction of the Lodge Road premises was carried out in 1934 with new furnaces added to increase production, and expensive control equipment added to further improve quality.

John Walsh Walsh decorative glass and tableware developed over many years from the experience and expertise of previous generations with the Walsh legacy being that of an enlightened firm which produced glass of a fine pedigree. Because of the lack of documentary evidence and records, little has been known hitherto about this company.