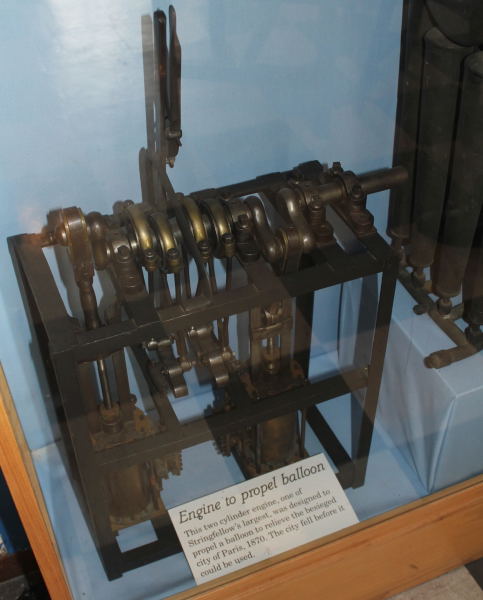 Two cylinder engine at Chard Museum, made by John Stringfellow in 1870 (see notes) 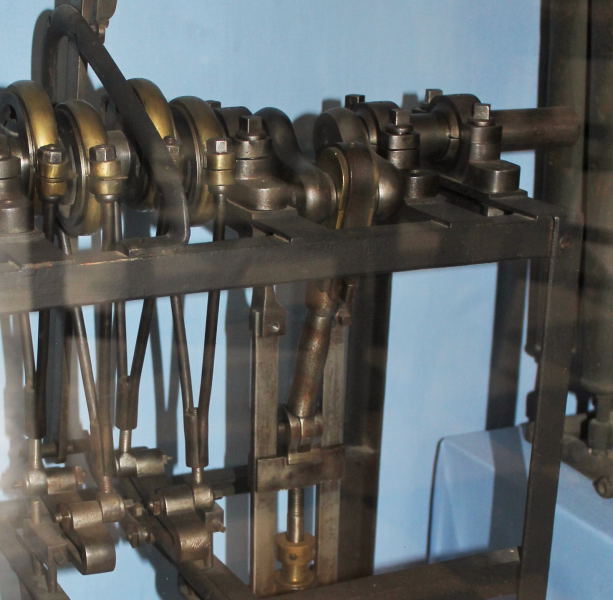 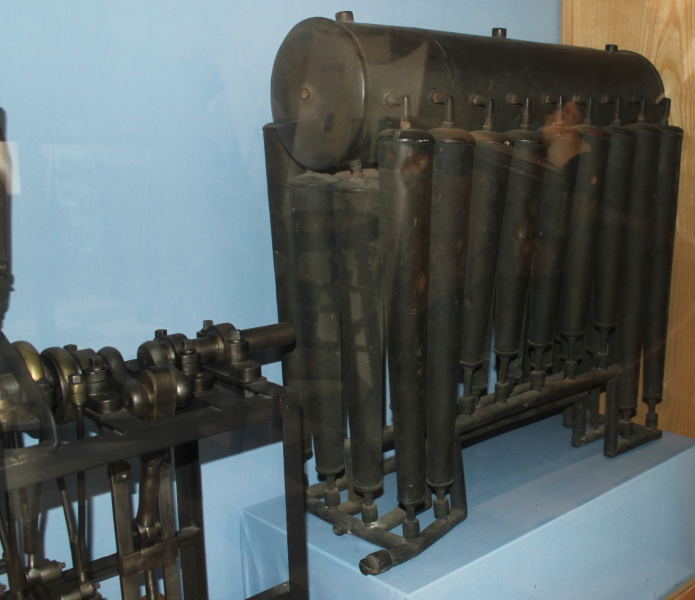 Boiler made for 1870 balloon engine on display at Chard Museum 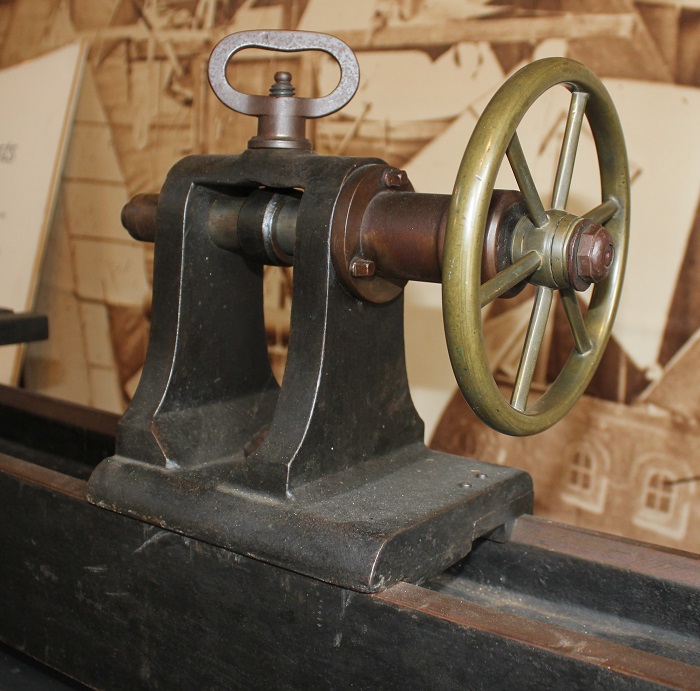 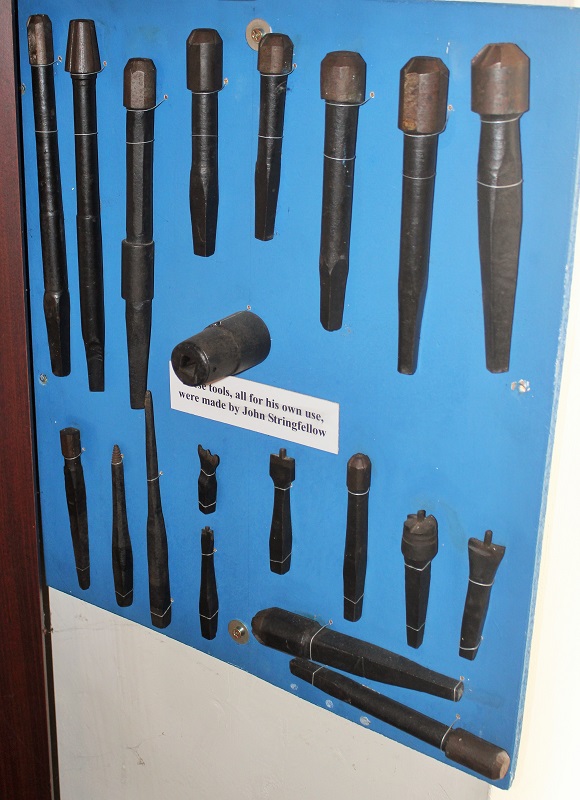 Drills, countersinks, etc made by Stringfellow for his lathe

John Stringfellow (1799-1883) was born in Sheffield and is known for his work on the Aerial Steam Carriage with William Samuel Henson.

1799 December 6th. Born in Attercliffe, near Sheffield, the son of William Stringfellow, cutler, and his wife, Martha.

At an early age Stringfellow was apprenticed to the lace trade in Nottingham, but about 1820 moved to Chard in Somerset, a centre of lace making as a maker of bobbins and carriages for the lace industry. He was so successful that within a few years he had established his own business as a manufacturer of bobbins and bobbin carriages.

In 1831-2 he launched hot-air balloons at local festivals, one of which flew a distance of more than 4 miles

His goal was powered flight with fixed-wing aeroplanes and the idea was developed in discussions with another manufacturer of lace-making machinery who had moved to Chard in the late 1830s, William Samuel Henson (1812–1888). They were inspired by the aeronautical writings and experiments of George Cayley.

Together with Henson, he had ambitions of creating an international company, the Aerial Transit Company, with designs showing aeroplane travel in exotic locations like Egypt and China.

Henson and Stringfellow began testing various wing forms in model gliders, and by 1840 had evolved their projected full-size passenger-carrying flying machine or ‘aerial steam carriage’, which Henson patented in April 1843.

A 20 foot wingspan model powered by a steam engine, of Henson origin but much improved by Stringfellow, was tested in 1845 but could not sustain itself in the air. Henson then abandoned his aeronautical ambitions altogether.

Stringfellow persevered on his own, however, and built another 10 foot model powered by a smaller steam engine of his own design. More than one witness recalled that it gained height steadily after being launched on several occasions in 1848, and Stringfellow himself certainly considered that he had demonstrated with it the possibility of powered flight.

Stringfellow then built a number of other model aeroplanes and engines before entering a model steam-powered triplane and a model steam engine in the aeronautical exhibition at Crystal Palace in June 1868. His steam engine was awarded a prize of £100 by the Royal Aeronautical Society for having the greatest power-to-weight ratio of all the fifteen engines exhibited.

Despite their efforts, the designs were flawed with Stringfellow's ideas centred around monoplane and triplane models and Henson's ideas centred around an underpowered steam-powered vehicle. The two achieved popular attention, nonetheless, as Stringfellow did achieve the first powered flight, in 1848, in a disused lace factory in Chard, with a model 10 foot steam-driven flying machine.

A bronze model of that first primitive aircraft stands in Fore Street in Chard. The town's museum has a unique exhibition of flight before the advent of the internal combustion engine and before the manned powered flight made famous by the Wright Brothers. Stringfellow also invented and patented compact electric batteries, which were used in early medical treatment. Stringfellow's work was featured in an exhibition in 1868 at The Crystal Palace in London

In the late 1850s Stringfellow took up the new art of photography, becoming so proficient that he advertised himself as a professional portrait photographer, with a studio in Chard High Street.

1856 Patent. '191. John Stringfellow, of Chard, in the county of Somerset, Engineer. Improvements in galvanic batteries for medical and other purposes.[1]

1868 He was elected a member of the Royal Aeronautical Society, and with his prize money erected a building 70 feet long in which to continue his experiments, but his sight began to fail and he was unable to make any further progress.

1869 Patent. '1983. To John Stringfellow, of Chard, in the county of Somerset, for the invention of "improved apparatus for affording protection from bullets and other missiles."'[2]. He did not succeed in selling it to any of Europe's warring armies.

After his death, John's son, Frederick John Stringfellow, continued to take an interest in aeronautics.

Chard Museum has an excellent display relating to Stringfellow's life and work. This includes a small two-cylinder vertical steam engine said to have been built by Stringfellow in 1870 to propel a balloon intended to help relieve the beseiged city of Paris (but never used). The engine has Stephenson's link motion to allow for easy reversing (not an obviously essential attribute for every early aircraft, but this was for a dirigible!). The engine has a wrought angle iron frame, joined together by riveting (and possibly by brazing). The engine could not be mistaken for the work of a professional engine builder, but it was not intended for a long service life.

The vertical engine has a more rigid frame design, and the general standard of workmanship is higher than on the horizontal engine. The crankshafts of the two engines are of different construction. That on the horizontal engine has a bolted portion and its ends project from both sides of the frame (potentially allowing power to be taken from both ends), whereas the vertical engine's crankshaft has no bolted portion, and only has one driving end. It was possibly fabricated by silver-soldering the cranks to the shaft sections.

On the vertical engine, the crosshead guides are relatively thin strips (similar to the arrangement on the replica of his 1848 engine), and the connecting rods are short, while the horizontal engine has longer connecting rods and round bar guides. The connection between the eccentrics and the expansion links, and between the expansion links and the slide valves, is the same on both engines, and appears flimsy and susceptible to damage.

Stringfellow's metal turning lathe is on display at Chard Museum. Its design shows the input of John Stringfellow, in the presence of minor features found on his steam engines. Specifically, square-headed collared bolts and octagonal nuts have been widely used on both the lathe and engines.

The basic design is generally conventional, but the 'styling' of the tailstock is distinctive. An unusual feature is the use of an adjustable, replaceable insert to locate both the headstock and tailstock on the lathe bed's V-guide.

The lathe has a compound slide clamped to the bed, but has no sliding carriage or provision for screw-cutting.

A biography of John Stringfellow was written by Harald Penrose and first published in 1988.[4]