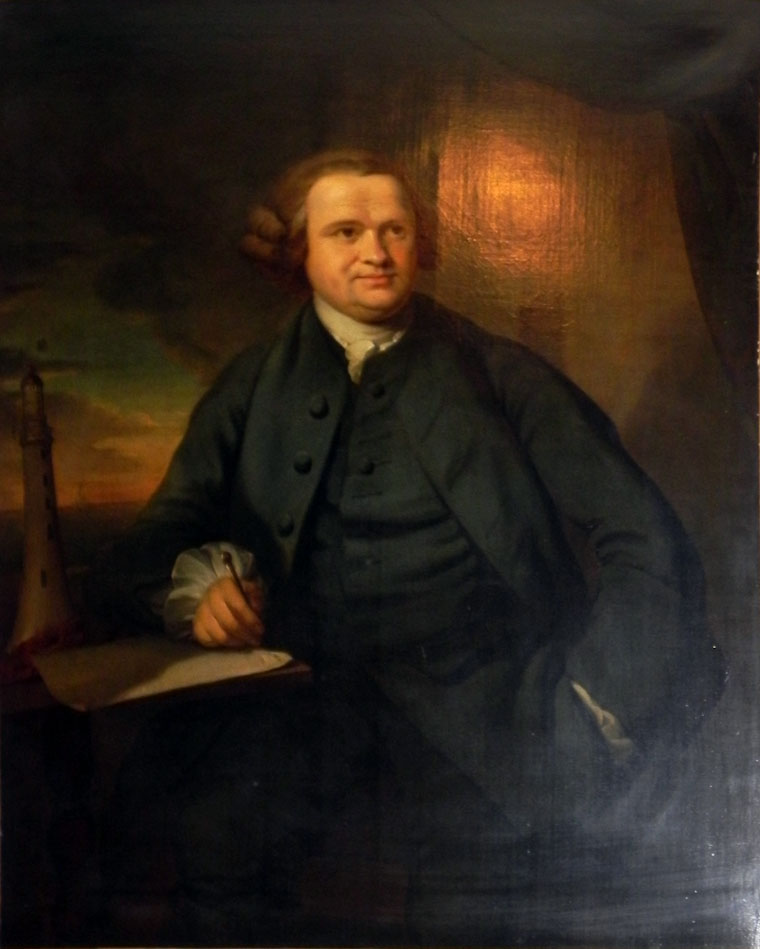 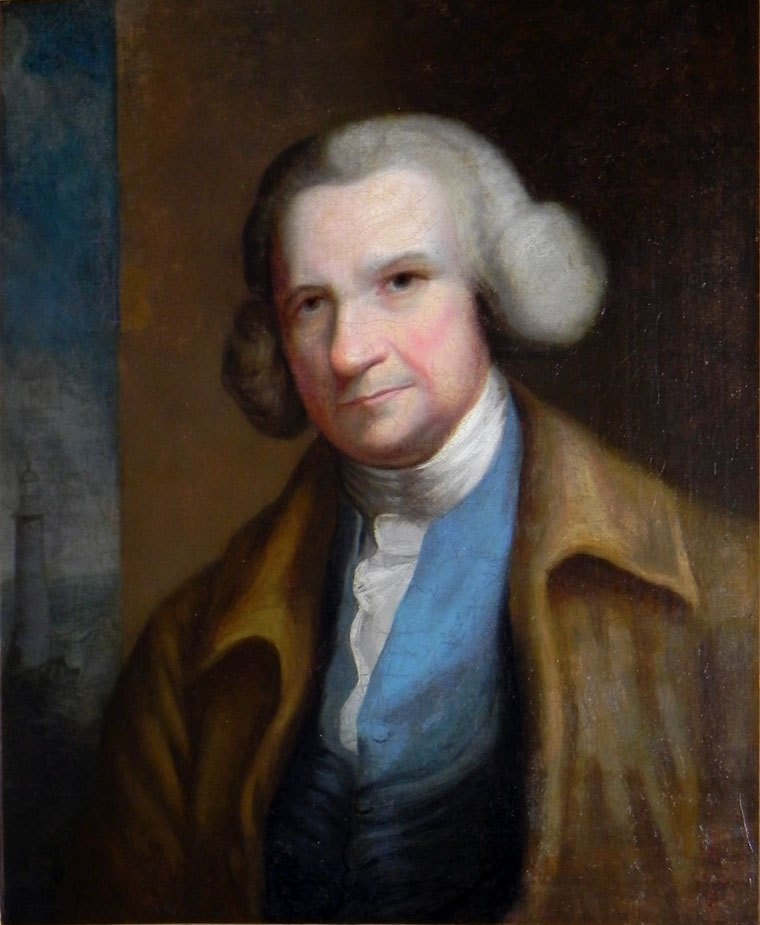 Lathe built by Smeaton for his own use. See text. 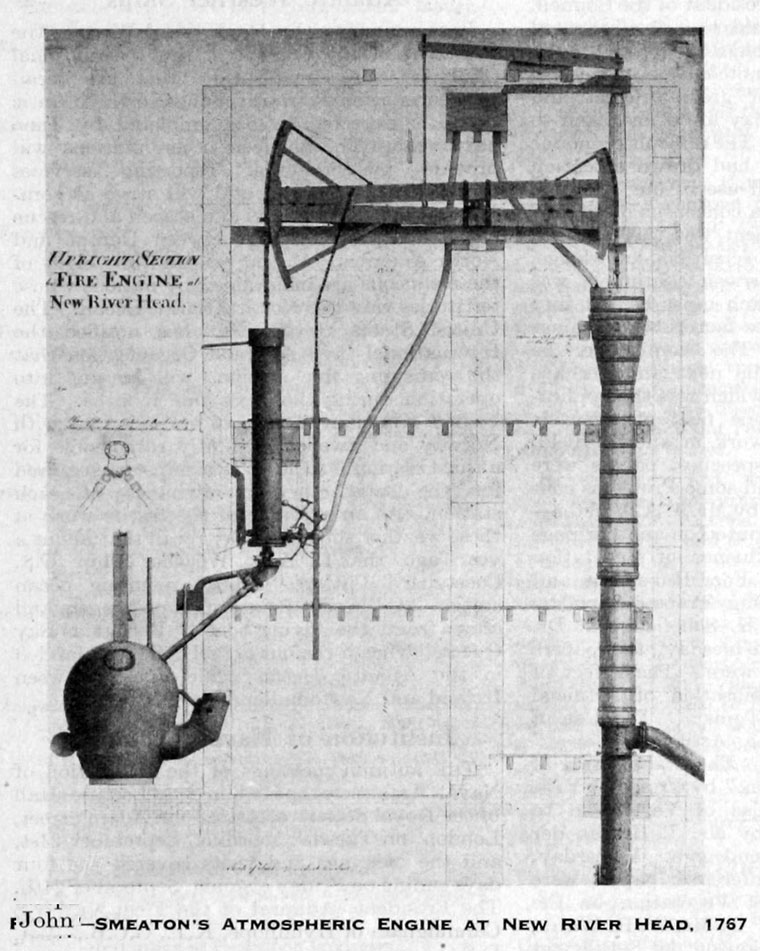 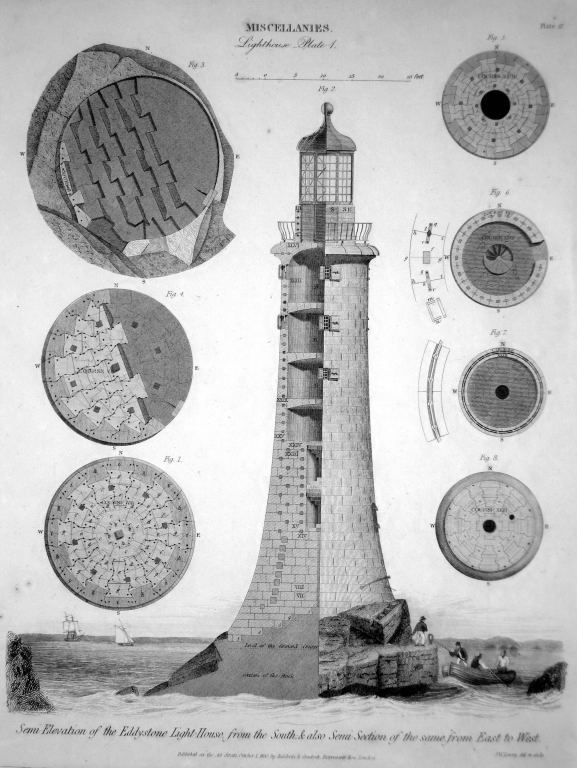 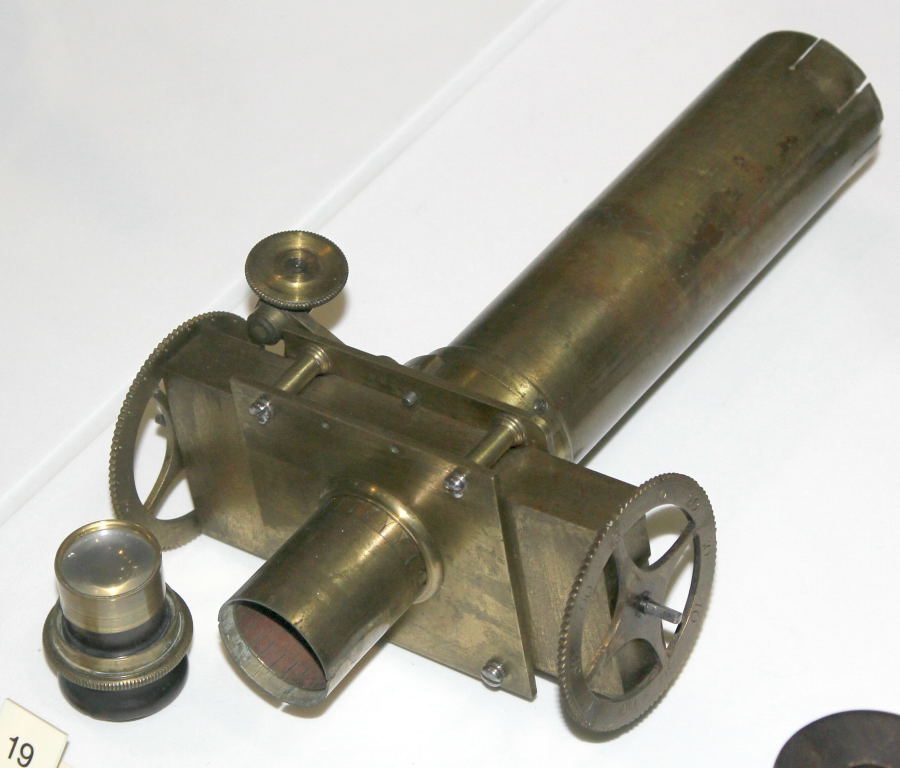 John Smeaton (1724-1792) was an eminent civil and mechanical engineer.

After studying at Leeds Grammar School, he joined his father's law firm, but then left to become a mathematical instrument maker (working with Henry Hindley), developing, among other instruments, a pyrometer to study material expansion and a whirling speculum or horizontal top (a maritime navigation aid).

1753 He was elected a Fellow of the Royal Society.

1759 He won the Copley Medal for his research into the mechanics of waterwheels and windmills. His paper addressed the relationship between pressure and velocity for objects moving in air, and his concepts were subsequently developed to devise the 'Smeaton Co-efficient'.

1759-1782 He performed a series of further experiments and measurements on waterwheels that led him to support and champion the vis viva theory of German Gottfried Leibniz, an early formulation of conservation of energy. This led him into conflict with members of the academic establishment who rejected Leibniz's theory, believing it inconsistent with Sir Isaac Newton's conservation of momentum. The debate was sadly marred by unfortunate nationalistic sentiments on the establishment's part.

Recommended by the Royal Society, Smeaton designed the third Eddystone Lighthouse (1755-59). He pioneered the use of 'hydraulic lime' (a form of mortar which will set under water) and developed a technique involving dovetailed blocks of granite in the building of the lighthouse. His lighthouse remained in use until 1877 when - with the rock underlying the structure's foundations beginning to erode - it was dismantled and partially rebuilt at Plymouth Hoe. He is important in the history of the development of cement, because he identified the compositional requirements needed to obtain "hydraulicity" in lime; work which led ultimately to the invention of Portland cement.

1761 Employing his skills as a mechanical engineer, he devised a water engine for the Royal Botanic Gardens at Kew in 1761 and a watermill at Alston, Cumbria in 1767 (he is credited by some for inventing the cast iron axle shaft for waterwheels).

1769 Designed a cylinder boring mill for the Carron Co for machining large cylinder castings. Driven by a water wheel 18ft diameter and 5 ft wide, it was the most powerful boring mill at the time. The weight of the cutting head was supported by a counterbalanced wheeled carriage which travelled in the bore of the cylinder. The principle was inherently incapable of producing work to the standard that would later be demanded for the more sophisticated steam engines which replaced the Newcomen type. John Farey devoted several pages to the mill in his 1827 book.[1]

Smeaton's next major work, however, ended in disaster. Hexham Bridge had been destroyed by a flood of the River Tyne in 1771. After investigating the gravel river bed Smeaton selected what he judged to be a better site and designed a noble nine-arch structure, work on which started in 1777. By 1779 work had been finished; the piers were surrounded by sheet piling with massive rubble masonry mounds as a protection against scour but, despite all this care, six of the eight piers were undermined by a violent flood in March 1782, two years after completion of the bridge

1782 Because of his expertise in engineering, Smeaton was called to testify in a court for a case related to the silting-up of the harbour at Wells-next-the-Sea in Norfolk. He is considered to be the first expert witness to appear in an English court.

In 1782 he built the Chimney Mill at Spital Tongues in Newcastle upon Tyne, the first 5-sailed smock mill in Britain.

Highly regarded by other engineers, he contributed to the Lunar Society and founded the Society of Civil Engineers in 1771. He coined the term civil engineers to distinguish them from military engineers graduating from the Royal Military Academy at Woolwich. After his death, the Society was renamed the Smeatonian Society, and was a forerunner of the Institution of Civil Engineers, established in 1818.

1792 October 28th. While walking in the garden of his family home at Austhorpe, he suffered a stroke and died six weeks later. He and was buried in the parish church at Whitkirk, West Yorkshire.

After Smeaton's death, his lathe came into the possession of Nathan Waddington, after whose death it passed to his son James Waddington. He lent the lathe to his brother–in–law Ezra Mathers of Hunslet. Subsequently, the lathe came into the possession of Mr J.W. Morrill (owner of Austhorpe Lodge, who loaned it to the Yorkshire College for Education in the early 1900s. For a time it was displayed at Temple Newsam Museum, and is currently (2017) in storage at Armley Mills Museum, pending future display.

Fortunately, many of John Smeaton's comprehensive reports and notes were preserved and published, some of which are available online[2] [3]

1770 Determined to improve the performance of the atmospheric engine (as it neared the end of its career), Smeaton built an experimental engine and boiler in the grounds of his house at Austhorpe and carried out numerous tests over a period of 2 years. Although this did not lead to significant conceptual changes, Smeaton was able to introduce refinements in atmospheric engines and their boilers which markedly improved their efficiency.[5]

1772 Smeaton was requested to design an engine for Long Benton Colliery. The engine was started in February 1774. He was able to test the performance of the engine which it replaced and compare it with that of the new engine. The parameter of interest was the'duty', defined in terms of the amount of work done per bushel of coal. The duty of the old engine was 4.6 million ft.lb. per bushel, while that of the new engine was 9.1 million. This was a remarkable improvement on its admittedly poor predecessor, but the result was still impressive compared with the best of the atmospheric engines (a 25% improvement on the previous best, and 40% on the typical 'good' engines.[6]

1775 Erected a large atmospheric engine at Chacewater Mine. It had a 72" bore, 9 ft stroke cylinder made by the Carron Co, and was the most powerful engine yet made. Engines of similar bore size were subsequently made for Carron, Dunmore Park and Bourn Moor. [7]

1773-7 Smeaton was requested to advise on the arrangements for pumping out the docks at Kronstadt, a duty for which a pair of windmills had been installed. Smeaton concluded that there was excessive leakage into the docks, and recommended replacing one of the windmills with a large atmospheric engine, to be built on the same masonry foundation. John Farey saw the Kronstadt engine working satisfactorily in 1819, and provided a detailed account of it. Smeaton designed the engine and boilers, and the main parts were made by the Carron Co. The engine was set to work in June 1777. The engine's bore was 66", stroke 8.5 ft, 10-13 strokes per min, lift 33-53 ft. The two dock pumps were of 26" bore, and the injection pump was 11" bore. The pitch chains connecting the reciprocating parts to the beam had cast iron links of 2 3/8" by 4" section, with 2" wrought iron pins. Farey stated that the beam had the same dimensions as that at Chacewater Mine (which was a deep laminated wooden beam with ten laminations). The three cast iron boilers were each of 10 ft maximum diameter with a hemispherical top, and 16.3 ft high. Bolted flanges connected the top hemisphere to a cylindrical section, and this in turn was bolted to two tapering sections and the bottom plate. Each boiler weighed 15.5 tons. After leaving the furnace underneath the bottom plate, flues directed the hot gases round the outside before escaping.[8]

Note: Roman Dmitriev worked on the erection of the Kronstadt engine and became the 'sluice master'. In September 1777 he was sent to Britain for two years to study steam engines. He spent some time studying under Smeaton, and also gained information about the new engines of Boulton and Watt. Fedor Borsoi was involved with the Kronstadt after its completion, and in August 1779 he was sent to England. He stayed for 4 years, and started to build a working model of a steam engine which he'd seen working in London, probably a single-acting Watt engine. He completed the model on his return to Russia, and this can be considered the first Watt engine in Russia. Adam Smith was a British engineer involved with the engine in Kronstadt, and was joined in 1783 by his nephew Alexander Smith. Alexander visited England in 1789 to learn about steam engine devlopments, and wrote an informative report on significant developemts in engines and boilers.[9].

1777 Smeaton designed a remarkable winding engine for Prosperous Pit, Long Benton. It had a 26" bore, 68" stroke atmospheric engine which lifted water to a 30 ft diameter waterwheel. This turned a pair of large gears, one or other of which would be engaged with a lantern pinion to turn a long shaft. At the other end of the drive shaft was a bi-conical winding drum which raised one bucket and lowered another down the mineshaft, which was nearly 500 ft deeep. Each bucket (corve) raised 700 lb of coal, and there were 30 lifts per hour. A brake drum was also fixed to the draive shaft. Smeaton designed a machine for cutting the screw threads on the cones of the winding drum. The ironwork was supplied by the Carron Co. Two similar engines were made, one being somewhat larger. The atmospheric engine was unusual in having a wheel, with its axle at the apex of a wooden A-frame, instead of a rocking beam.[10]

Having decided that he wanted to focus on the lucrative field of civil engineering, he carried out an extensive series of commissions, including: