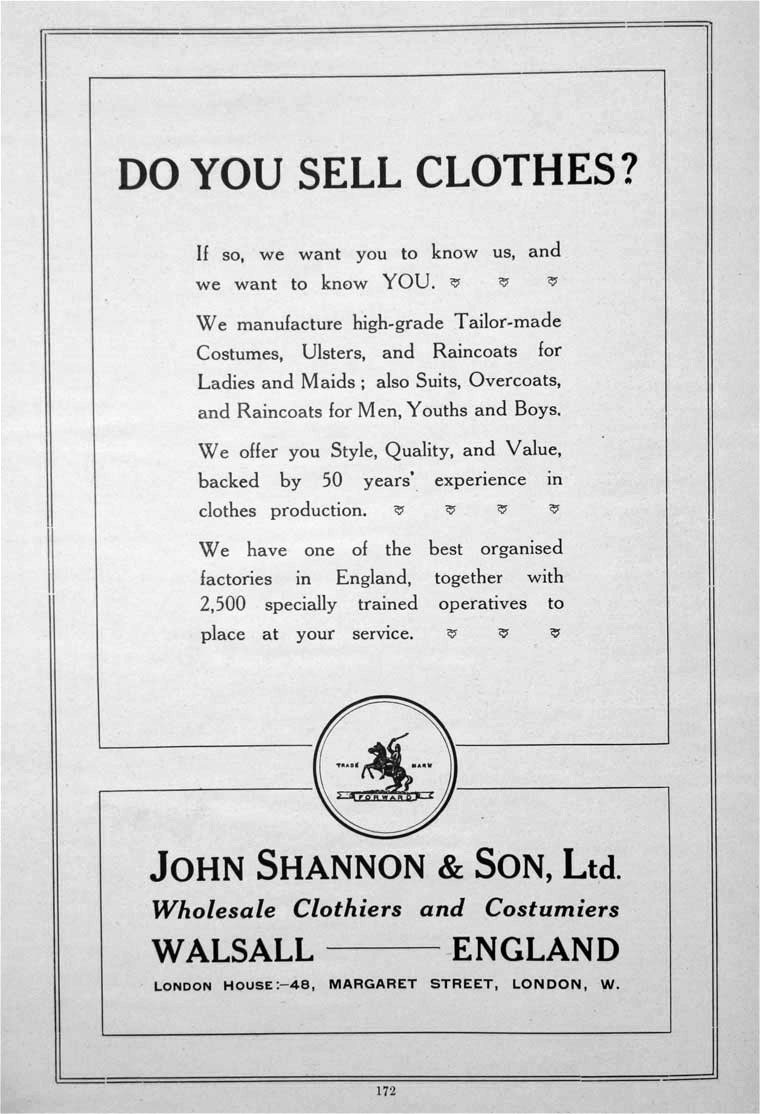 c1875 His son Edmund John Shannon succeeded to the business and greatly expanded it.

1887 The building was replaced by a larger one - a four storey industrial building in three parts; two flanking parts of 8 and 11 bays in brick with segmental headed pilasters. The central part of 8 bays is more elaborate with stone strings and dressings, moulded brickwork to the jambs and decorative brickwork strings. The windows are generally pairs of lancet sashes. There is an early hydraulic lift and steam driven generating plant. Some of the upper floors are of Canadian maple donated to the firm in lieu of a debt. The roofs are supported by pillars similar to those in St Matthews Parish Church. These are cast iron drain pipes filled with sand.

1888 Employed 800 hands with a further 137 out workers finishing off clothes. At this time their ready to wear gentlemen's suits were retailing at 14 shillings to 30 shillings. There were 300 machines at work, managed by girls aged 14 to 25 years of age.

1898 The company was registered on 11 July, to acquire the business of wholesale clothing manufacturers of a company of the same name. [1]

1926 Shannon's was liquidated, after the resignation of the managing director, John Clark Shannon who had succeeded his father Edmund in 1913. The new reconstructed company went public in 1926, with the Shannon family as principle shareholders

WWII Large contracts for uniforms were carried out

After the end of the war, there was fierce competition for the available labour in Walsall. As the clothing industry was unable to pay the high rates at the time, Shannon's work force shrank.

During the 1960s the company consolidated to meet the new conditions.

c1977 The company was under the chairmanship of Michael William Goold, managing director of the Walsall leather goods firm W. A. Goold (Holdings). Many of the Goold operations moved in to the Shannon's buildings. These included the saddlery firm E. Jeffries and Sons (incorporating Premier Saddles), the jewellery division of Pearmak, the fancy leather goods division of W. A. Goold and latterly Leonard Neasham, the gentlemen's outfitters.

The clothing division was not a company with potential growth and the decision was made to concentrate on the leather goods market. A Hardy Amies range of luggage was introduced in 1982, with the work carried out in the Newhall Street premises and distributed from George Street.

Modern equipment now operates alongside the wood panelling and etched glass of the old counting house. The old generators were shut down c1980 and the factory moved over to grid electricity.

The firm eventually closed in 2000 and the site is under going refurbishment as offices and apartments. This is running alongside the redevelopment of Church Hill and George Street into a development known locally as "Shannon's Mill"

Shannon's Mill was burned down by fire on August 3rd 2007.