Grace's Guide is the leading source of historical information on industry and manufacturing in Britain. This web publication contains 142,357 pages of information and 227,857 images on early companies, their products and the people who designed and built them. 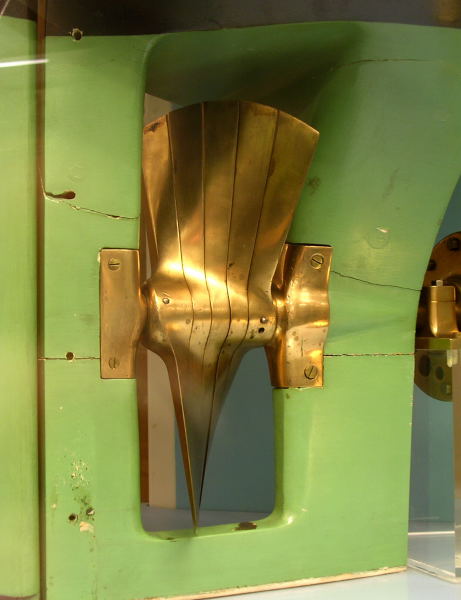 1848 patent model of Seaward's folding propeller. This was one of many ingenious inventions displayed at the London Science Museum, aimed at reducing the drag of propellers when the vessels were under sail. In this case the propeller would be folded like a lady's fan, so that it was largely hidden behind the deadwood. 2010

John Seaward (1786-1858) was the founder of Seaward and Capel of Millwall, marine engineers

He was known as one of the most energetic and progressive engineers of his time. The son of a Lambeth builder, he gained knowledge in bridge building, lead mining and gas engineering and with his brother (Samuel Seaward) opened the Canal Iron Works at Millwall.

He was an advocate of tubular boilers and surface condensers and he invented a telescopic funnel.

John Seaward (1786-1858) established Seaward and Co at the Limehouse Iron Works, Millwall, in 1824. Seaward was already an accomplished civil and mechanical engineer when he started the company which designed and built swing bridges, cranes, marine engines and mill equipment.

1825 Patent with his brother Samuel Seaward (J. and S. Seaward of the City Canal Iron Works) for propelling road locomotives [1]

1826 John Seaward, Limehouse, Engineer, became a member of the Institution of Civil Engineers.[2]

John Seaward was born at Lambeth in January, 1786; he was brought up at the Manor House, Peckham, and his education was completed at the Mansion House, Kennington, Surrey, where he acquired considerable proficiency in classics and mathematics; to which he afterwards added both modern and dead languages.

He began life as a surveyor and architect with his father, who was an extensive builder, and he then passed several years with Messrs. Doulle, Government contractors, as surveyor and manager of their works.

He was afterwards engaged by Grillier and Co, who, having established cement-works at Millwall, for the purpose of introducing a comparatively new article of commerce, had also undertaken the erection of Vauxhall Bridge: the direction of that work they confided to Mr. John Seaward, who exhibited considerable ability and perseverance in the midst of thepractical difficulties by which he was then surrounded. He there became acquainted with Jeremy Bentham, with Ralph and James Walker, the latter being the Engineer of the bridge, as well as with other leading men of the day.

He then undertook the management of some lead-mines in Wales, where he spent several years, engaged in the engineering and mechanical duties of the position, and at the same time devoting a portion of his time to the acquirement of chemical knowledge, which eventually proved very useful to him. His indomitable perseverance and application soon rendered him conversant with the processes and the machinery in use in that part of the country, where he made the acquaintance of Woolf, Trevithick, and other mechanical Engineers, with whom he kept up a constant correspondence.

On his return from Wales, he superintended the construction of Gordon’s, Dowson’s, and other docks on the River Thames; and became agent for the Gospel Oak Iron Works, in Staffordshire, in which position he passed several years. He was at the same time connected with the Imperial and Continental Gas Company, and lighted several towns and cities both at home and abroad, particularly in France, Belgium, and Holland.

In the year 1823 he sent in drawings for the erection of a new London Bridge, which he proposed to construct in three arches of 230 feet span, and he demonstrated, in a very able treatise on the subject, the practicability of executing it, with a mathematical examination of the arch of equilibrium, proposed by Dr. Hutton. This and other compositions brought him into connection with Sir Humphry Davy, Davies Gilbert, Ewart, and other distinguished men in the scientific world.

In 1824 he established the Canal Iron Works, Millwall, Poplar, for the construction of machinery of every description; but more particularly for building marine-engines.

The first vessel built there in 1825, the ‘Royal George,’ was intended to run between Dover and Calais. His brother, Samuel Seaward soon afterwards joined him, and conjointly they carried on those works, which produced machinery for every part of the globe, and engines that have made the name of Seaward conspicuous both at home and abroad.

In 1827 they constructed engines for the ‘Rhine,’ which have been constantly running, until within a recent period.

In 1829, they assisted in the formation of the Diamond Steam Packet Company, and built the engines for the boats which ran for many years between Gravesend and London. Of these the 'Ruby' and the 'Sapphire' were types for speed and for accommodation; which could only be superseded by railway capability.

The brothers John and Samuel Seaward were early advocates for the use of auxiliary steam-power, especially for the voyage to India by the Cape of Good Hope, and the experiment was made by them on board the ‘Vernon’ East Indiaman, in the years 1839 and 1840, an account of which is given in the Transactions.

In 1836 Messrs. Seaward and Co. brought out the direct-acting engines for the ‘Gorgon’ and the ‘Cyclops,’ known as Seaward’s Engines, nearly dispensing with the heavy side-beam engines, up to that period so much in use. Their success was complete, and the saving obtained in the consumption of fuel by the double-slide valves, both for the steam and exhaust, with other ingenious improvements, rendered their names well known, and for many years they shared with others the Government orders for the British Navy.

They built the engines for the Volcano, Vixen, Leopard, Megma, Geyser, Blenheim, Alecto, Growler, Hope, Prometheus, Montezuma, Conflict, Ardent, Firebrand, Horatio, Polyphemus, Penelope, Nile, Driver, Avenger, Termagant, Styx, Sidon, Caradoc and many others of less importance. At the same time they adapted their engines to many large vessels for the Honourable East India Company, for the Steam Navigation Companies at home, as well as for various Governments and Companies abroad.

They also designed and executed many large swing-bridges, hoisting-shears, dredging-machines, cranes, and other apparatus for the docks in London, Liverpool, Southampton, Lowestoft, and other places, as well as for foreign localities; besides numerous miscellaneous works for lead-mills, saw-mills, sugar-mills, &c.

The lamented decease of Mr. Samuel Seaward in 1842, threw upon Mr. John Seaward the sole responsibility of conducting the Canal Iron Works, whilst it deprived him of an energetic and inventive coadjutor, whose co-operation could not be too highly estimated. Still, however, with the aid of some attached assistants, who had been brought up under the firm, he continued to labour; and he may be fairly said to have 'died in harness,' for his attention to business was unremitting to the last.

It would not be doing justice to Mr. John Seaward to omit noticing the construction of the engines for the ‘Amazon,’ of 800 H.P., which he produced in the most complete and perfect manner, sacrificing his pecuniary interest, and prompted only by the desire of producing a work which he hoped would have been a lasting monument of his fame. This vessel, unfortunately, was destroyed by fire on her first passage to the West Indies, in January, 1852.

For thirty-three years Mr. John Seaward conducted the Canal Iron Works with that disinterestedness and energy which characterised all he did, and during that period, alone, or in conjunction with his brother Samuel, he introduced into steam navigation many important inventions and improvements. Among these may be mentioned the introduction in the Royal Navy of the

- the disconnecting cranks for paddle-wheel engines,

- the self-acting nozzles for feed and for regulating the saturation of the water in marine boilers,

- the double passages in cylinders, both for steam and eduction,

- the cheese-couplings so generally adopted to connect and disconnect the screw-propeller to and from the engines, and other minor ameliorations.

Mr. Seaward joined the Institution of Civil Engineers, as a Member, in the year 1826, and whilst his health permitted, he was a frequent attendant at the meetings, to the interest of which he contributed by valuable remarks on the discussions.

He wrote some useful papers on professional subjects, and took part in most of the scientific investigations and experiments of the period. His health, however, compelled him, for some years past, to restrict himself to the society of his own family and a few friends; and after a useful career of constant and unremitting labour, he died on the 26th of March, 1858, in the seventy-first year of his age, highly esteemed by all who knew him intimately, and deeply regretted by the numerous recipients of his benevolence, for few applied to him in vain.