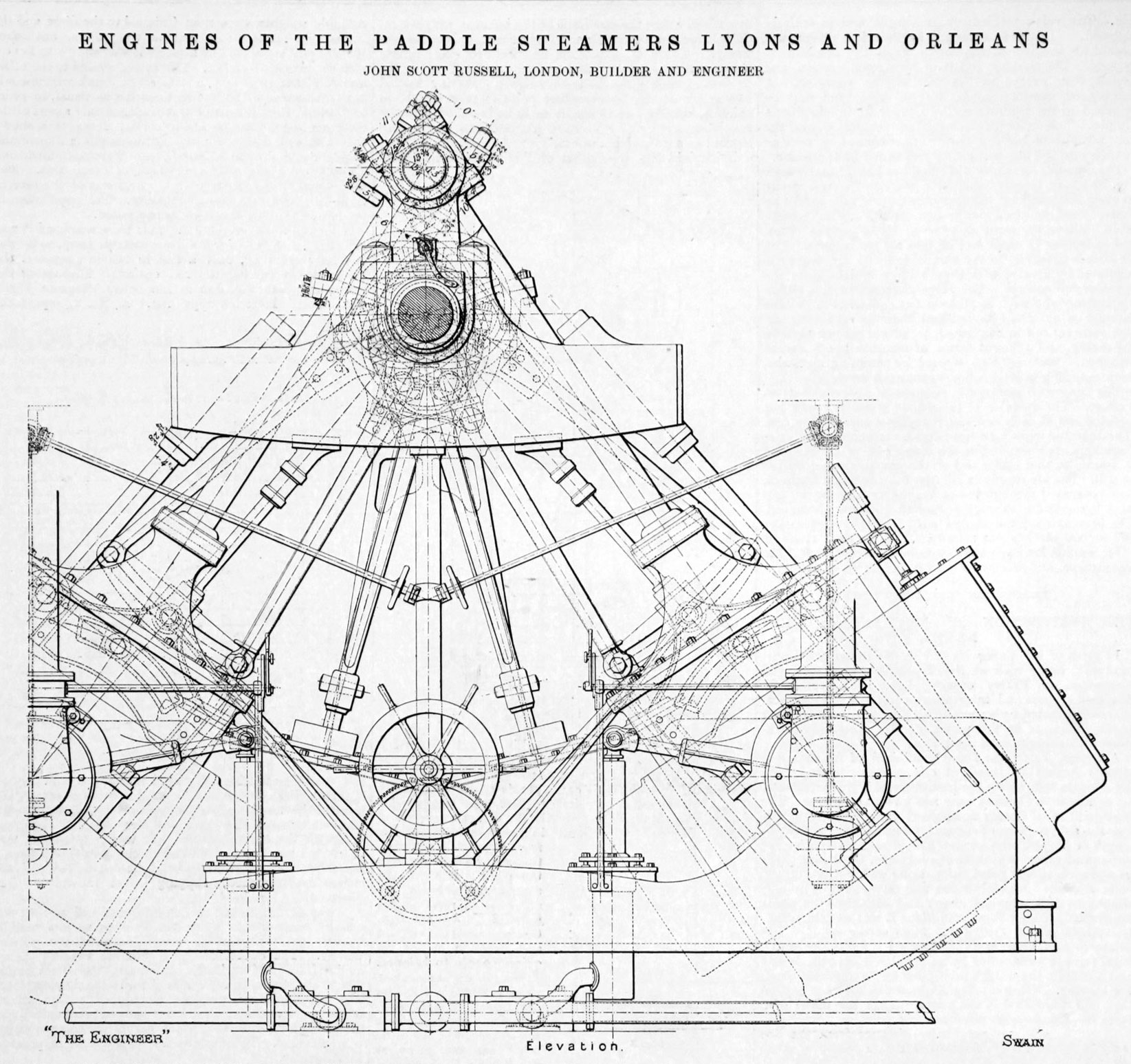 1901. Engines of the paddle steamers Lyons and Orleans. 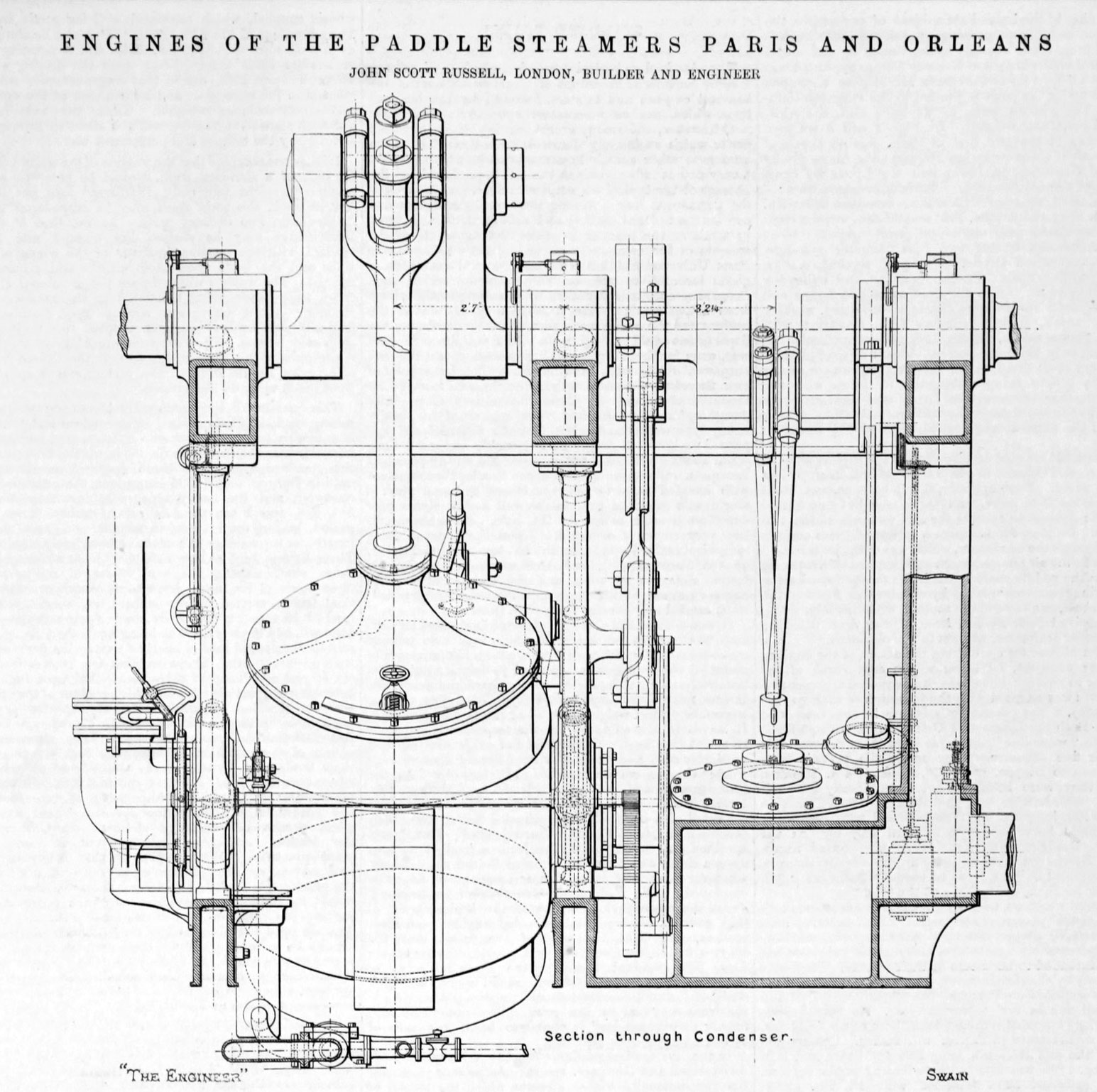 1901. Engines of the paddle steamers Paris and Orleans.

John Scott Russell (1808-1882) was a Scottish naval engineer who built the SS Great Eastern in collaboration with Isambard Kingdom Brunel, and made the discovery that gave birth to the modern study of solitons.

1825 Graduated from the University of Glasgow, and moved on to Edinburgh University where he taught mathematics and natural philosophy.

1834 While conducting experiments to determine the most efficient design for canal boats, he discovered a phenomenon that he described as the wave of translation. In fluid dynamics the wave is now called a Russell solitary wave or soliton. The discovery is described here in his own words:

"I was observing the motion of a boat which was rapidly drawn along a narrow channel by a pair of horses, when the boat suddenly stopped - not so the mass of water in the channel which it had put in motion; it accumulated round the prow of the vessel in a state of violent agitation, then suddenly leaving it behind, rolled forward with great velocity, assuming the form of a large solitary elevation, a rounded, smooth and well-defined heap of water, which continued its course along the channel apparently without change of form or diminution of speed. I followed it on horseback, and overtook it still rolling on at a rate of some eight or nine miles an hour, preserving its original figure some thirty feet long and a foot to a foot and a half in height. Its height gradually diminished, and after a chase of one or two miles I lost it in the windings of the channel. Such, in the month of August 1834, was my first chance interview with that singular and beautiful phenomenon which I have called the Wave of Translation".

1834 Designed a 26-seater steam coach. These vehicles were built by the Grove House Engine Works in Edinburgh. They were powered by a two-cylinder vertical engine with a square bore to stroke of 12 in. There were connecting rods to the crankshafts, one for each cylinder. the back axle was on semi-elliptical springs. Six of these vehicles entered service with the Steam Carriage Company of Scotland.

1838 Became a manager at Caird and Co's engine works in Greenock.

1841 Began tests on the resistance of different hull shapes on behalf of the British Association. Leased Virginia House and erected an experimental tank in the grounds of the house.[1]

1844 Moved to London and, as secretary to the Royal Society of Arts, stimulated the idea of a national exhibition which was realised as the Royal Commission for the Great Exhibition of 1851. He worked on the design of yachts, boats, barges and ships.

1847 Russell and partners had taken over the old Fairbairn shipyard at Millwall, which took up an increasing amount of his time particularly from 1851 when he took sole control of the yard.

1849 Elected a Fellow of the Royal Society (FRS) of London

1850 Designed a yacht, Titania, for Robert Stevenson which had very hollow bowlines but was constrained by British yacht-racing rules. The following year Titania was the only yacht to accept the challenge of the US yacht America; her defeat inaugurated the America's cup races.

He was held in high regard by Isambard Kingdom Brunel. By the spring of 1852 Brunel was discussing plans with Russell for a truly enormous ship, the SS Great Eastern, at its time, this was to be the largest moveable object man had ever created. Before building work could begin, Russell's shipyard was devastated by a serious fire.

David Napier's adjacent works had stood idle for fully a year before, in 1853, a further use was found for them. As the Napier Yard adjoined that where he was then starting construction of the Great Eastern, and the space and resources of both yards were found necessary, so an arrangement was made to combine them temporarily. Part of the Napier property was accordingly leased, in 1853 or 1854, and a small portion, that had been otherwise occupied, was arranged for at a later date.

The project was plagued with a number of problems - Russell was in financial difficulties; his shipyard, like several other Thames builders, failed in February 1856; the two men disagreed on a number of aspects of the design and construction of the ship.

The SS Great Eastern was eventually launched in 1858.

1878 October. 'CHARGE OF ASSAULT.- At the West Kent Quarter Session, on Thursday, a charge of assault was investigated, in which Mr. John Scott Russell, the well-known engineer, was indicted for assaulting Thomas Strinson Rooke, clerk to a firm of London solicitors. From the evidence it appeared that the prosecutor, who held an order of foreclosure, took possession of Mr. Russell's house and estates on behalf of the Land Securities Company, which had a mortgage on the property. Mr. Russell ejected him from the house, and in so doing he committed the assault complained of. He was convicted and fined £10, and was ordered to enter into sureties to keep the peace.'[5]

1888. His wife Henriette died at Ventnor, Isle of Wight. 'Mrs Scott Russell, a lady, aged 70 years, lodging Ventnor, met with a sad death Tuesday. She fell with her head the firegrate, and was burned to death before she was found this position by the servants'[7] 'A shocking fatality occurred hero Tuesday, resulting the death Mrs. Scott Russell, who was the widow of the once well-known designer of the Great Eastern steamship. She was lodging at Carisbrooke House, Ventnor, and on Tuesday morning her maid took her breakfast to her in her sitting room, leaving her mistress there alone. A quarter of hour after the servant had left, the landlady of the house entered the room to obtain the usual orders, and was horrified to find Mrs. Scott Russell lying on the hearthrug enveloped in flames. Aid was summoned, and as soon as the flames were extinguished it was seen that the unfortunate lady had been frightfully burnt about the arms and body. Her condition was evidently critical, and she died before medical assistance could be rendered. Mrs. Scott Bussell was 80 years age, and her death has caused a painful impression in the neighbourhood.'[8]