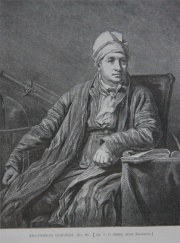 John Robison (February 4, 1739 – January 30, 1805) was a Scottish physicist and inventor. He was a professor of philosophy at the University of Edinburgh.

1739 Born on 4 February 1739 in Glasgow, the son of John Robison, a retired Glasgow merchant and his wife, Jean Lawson.

He was educated at Glasgow grammar school

1757 Robison published an improved design for the Newcomen Engine

1756/7 Robison befriended James Watt when the latter was working on a collection of astronomical instruments bequeathed to the university, and it was in Watt's rooms at the college that he initially encountered Joseph Black. Their scientific conversations were soon interrupted when in 1758 Robison left for London in search of preferment.

1763-4 Having previously discussed the design of steam engines with James Watt, John Robison was drawn back to this topic when James Watt began the sequence of enquiries that culminated in his invention of the separate condenser. In addition, they collaborated on the construction of an improved perspective machine, as well as on other practical projects.

1770 Robison's life took a very different turn when he travelled to St Petersburg as secretary to Admiral Knowles, who had been appointed by Catherine the Great to reform the Russian navy. Once established among the British expatriates, Robison attempted to lure Watt to St Petersburg in 1771 with the promise of a post, but Watt refused.

1793 His correspondence with James Watt shows that he hoped to write a text on practical mechanics intended for engineers and millwrights at this time. Although this project never came to fruition, many of the contributions to the third edition of the Encyclopedia Britannica that he wrote between 1793 and 1801 were devoted to related subjects.

1796 Robison remained devoted to James Watt. He travelled to London in December 1796, even though he was extremely ill, to present evidence on Watt's behalf before the court of common pleas in a legal battle involving the patent for the separate condenser, and his intervention helped win the case.

Robison's major published scientific papers included a letter on the improvement of the Newcomen Engine, which appeared in the "Universal Magazine of Knowledge and Pleasure" (21, 1757, 229–31),

1822 His contributions to the Encyclopaedia Britannica, along with other pieces, were collected in "A System of Mechanical Philosophy" (ed. D. Brewster, 4 vols., Edinburgh, 1822).