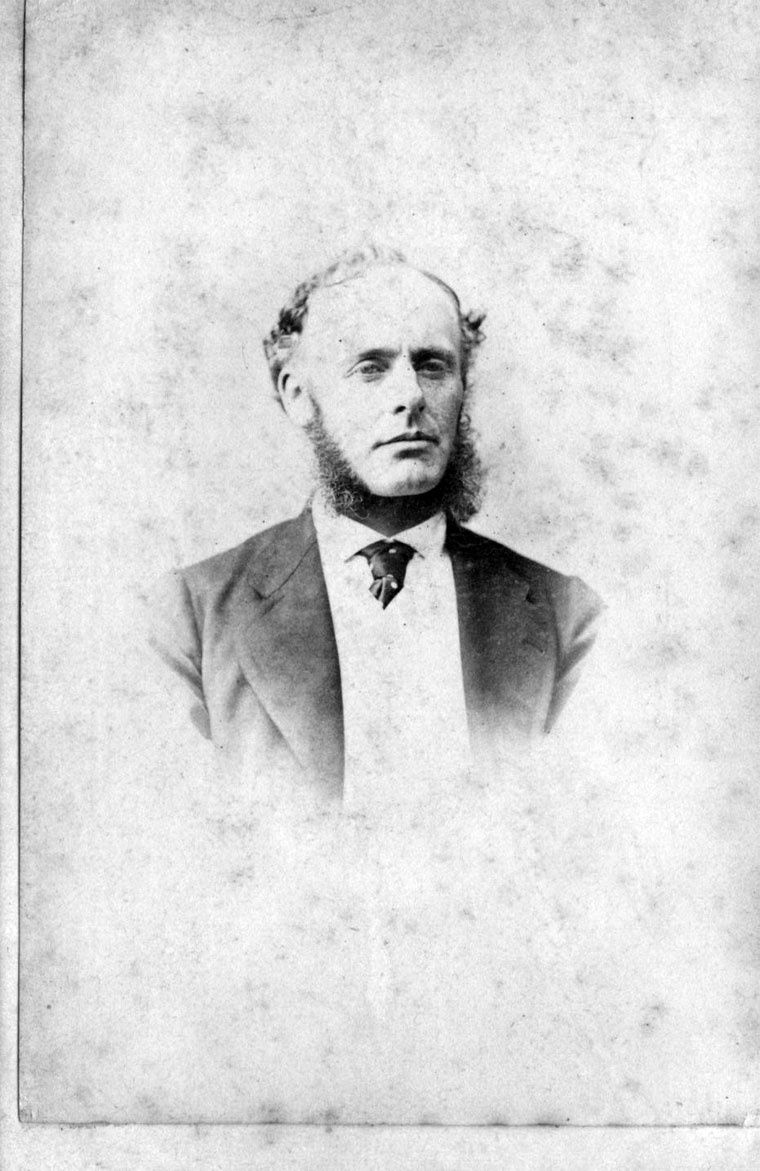 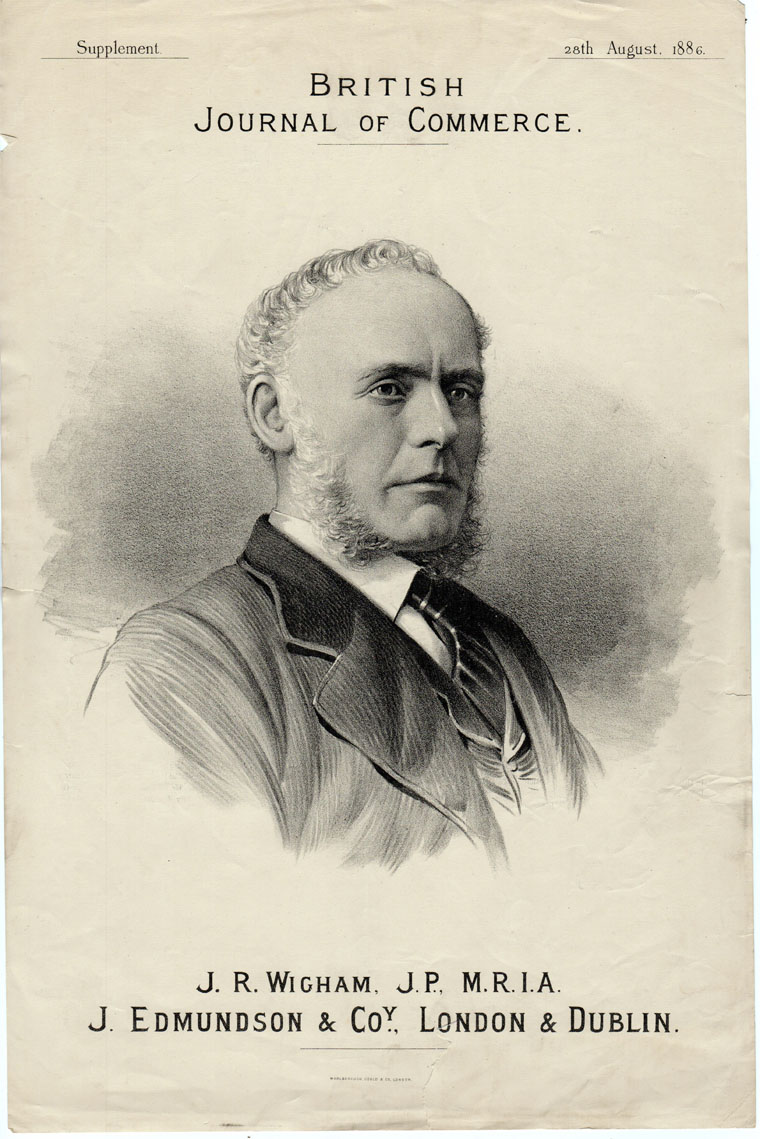 1886. Taken from The British Journal of Commerce supplement. 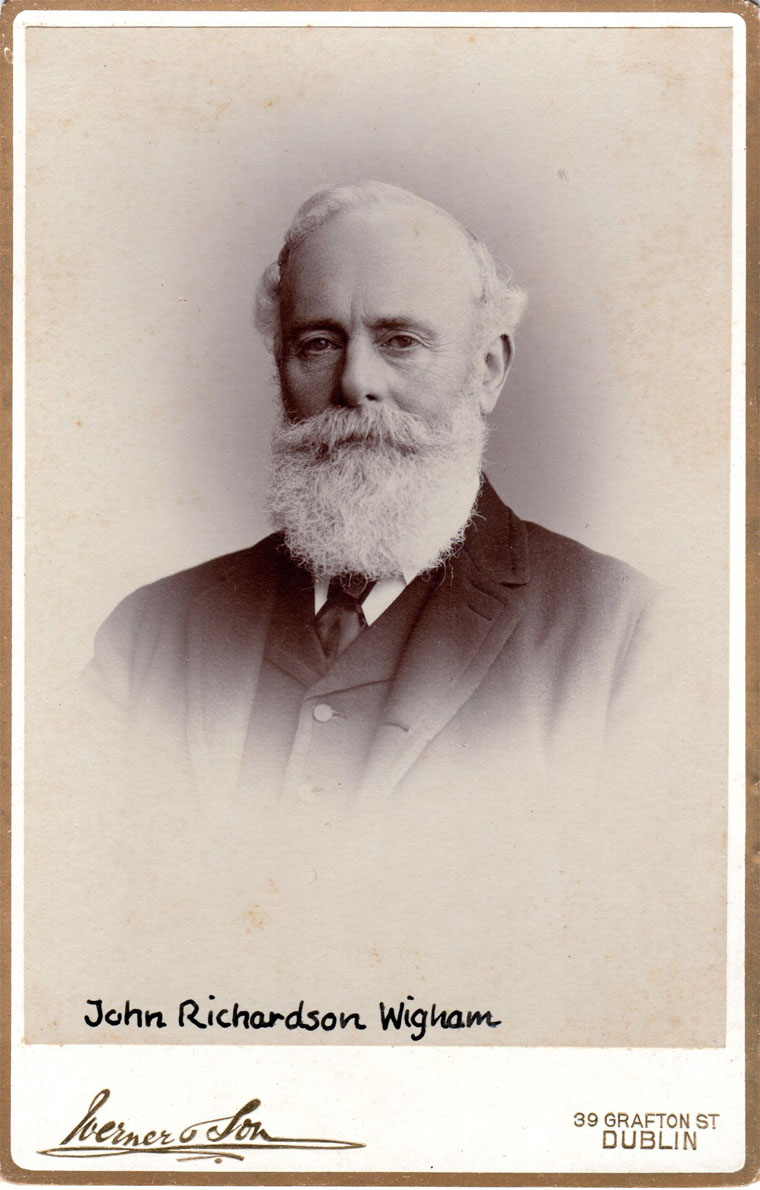 John Richardson Wigham (1829-1906) of J. Edmundson and Co was a prominent lighthouse engineer of the 19th century.

When he was 15 years old he was apprenticed to his brother-in-law Joshua Edmundson in Capel Street, Dublin, Ireland. Edmundsons dealt in iron-mongery, ran a brass foundry, and carried out tin plate working and japanning (metal paintwork). After John joined, they also provided gas generation plants.

On 26 January 1848, Joshua unexpectedly died. Though John was only 19 years old, he took over operation of the company and provided for his sister and her children.

Despite his relative youth and limited education John Wigham proved to be a very successful businessman. He concentrated on the provision of more efficient gas-plants of his own design, and the name changed to Joshua Edmundson and Co.

Wigham's relatives, in Scotland, were involved in shipbuilding, and he developed an interest in lighting used as a navigational aid at sea. Initially, buoys only had bells to warn mariners at night: the difficulty lay in designing an oil-lamp which could burn while unattended and not be extinguished by waves and storms. The first successful lighted buoy was patented by John Wigham in 1861. It was installed in the river Clyde.

In 1863 Wigham was given a grant by the Dublin Ballast Board to develop a system for gas illumination of lighthouses.

In 1865 the Baily Lighthouse at Howth Head was fitted with Wigham's new gas 'crocus' burner, this design was, which was 4 times more powerful than equivalent oil lights. An improved 'composite' design, installed in the Baily light in 1868, was 13 times more powerful than the most brilliant light then known, according to the scientist John Tyndall, an advisor to the United Kingdom's lighthouse authority, Trinity House.

In 1870, the light at Wicklow Head was fitted with Wigham's patent intermittent flashing mechanism, which timed the gas supply by means of clockwork. When this mechanism was combined with a revolving lens in Rockabill Lighthouse, the world's first lighthouse with a group-flashing characteristic was produced.

Wigham had a long-standing rivalry with the Engineer-in-Chief of Trinity House, James Nicholas Douglass, which erupted over trials of rival gas, oil and electric illumination systems conducted at South Foreland Lighthouse, Dover, in 1884-5. Tyndall, still acting as a scientific consultant, accused Douglass of using his position to influence the trials' outcome and ensure the adoption of his own patents over those of Wigham. Wigham also stated that Douglass had used elements of one of his rejected designs. As a result of the dispute, Tyndall resigned, while Wigham was eventually paid £2500 by the Board of Trade for patent infringement.

Wigham made many other inventions, largely in the area of maritime safety. He invented new oil-lamps, gas-lights and electric-lights, gas-powered fog signals, buoys, petroleum-fuelled buoy lights and acetylene lighting equipment. He was working on new electric illumination systems at the time of his death in 1906. Lights supplied by Edmundson & Co were used in lighthouses all over the globe; the firm still exists today as F. Barrett and Co, of Dublin.

Wigham was also director and vice-chairman of the Dublin United Tramways Company, and latterly president of the Dublin Chamber of Commerce. An advocate of temperance, he twice turned down a knighthood due to his religious beliefs.

1880s Head of the firm of Messrs. J. Edmundson and Co., Stafford Works, 35 Capel St, Dublin; responsible for the erection of lighthouse lights at Mew Island, Tuskar Rock, and Tory Island, on the Irish coast.

1892 Erected light for testing at the experimental station at Howth Baily in Ireland.

1906 November 16th. Died. He is buried in the Quaker cemetery at Blackrock, Dublin.