Grace's Guide is the leading source of historical information on industry and manufacturing in Britain. This web publication contains 142,988 pages of information and 229,205 images on early companies, their products and the people who designed and built them. 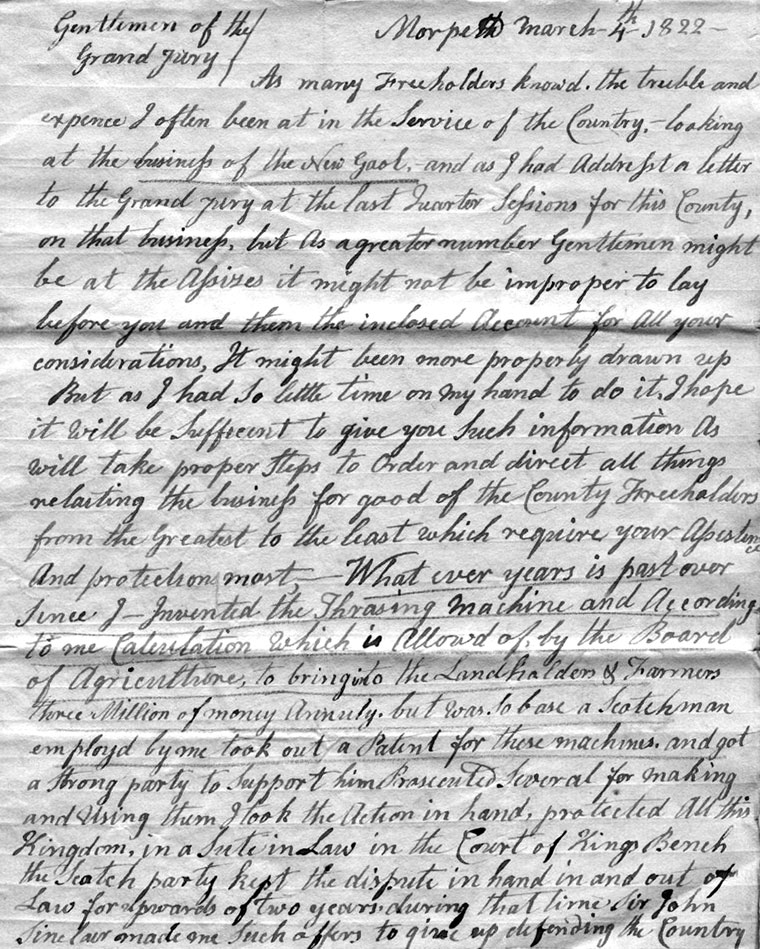 1776. 'JOHN RASTRICK, Engineer, Mill-wright, and Pump-maker, Morpeth. FINDING it has been reported that he intends soon to leave Morpeth, takes this method of acquainting the public, he has no such design, but carries on his business in all its branches as usual. He draws plans in the most accurate manner; constructs, upon the most approved plans, all sorts of mills for the manufacturing of corn, iron, woollen, linen, paper, and snuff; also saw-mills, and has lately invented one, to be worked by one person only. He was likewise the inventor of the triangular spindles, whose utility is known to many. He builds cranes, pile and hydraulical engines, rasping and chipping engines for logwood, etc. piers, quays, dam-heads, and fishing locks, etc. etc. He returns his grateful thank; for the many favours received, begs leave to solicit a continuance of them, and humbly hopes for the encouragement of the public in general. N. N. Models of his inventions to be seen at his house; and Gentlemen, having commands for him, are requested to direct for John Rastrick, as there is another person of the name of Rastrick in Morpeth.'[1]

c1776 Birth of daughter Hannah. Her death is recorded in 1866 and says she was the daughter of John Rastrick, civil engineer, of Morpeth.[2]

1779 'PATENT CHURN. JOHN RASTRICK, Engineer, Millwright, and Inventor and Proprietor of the IMPERIAL or PATENT CHURN, takes this method of informing those who have been pleased to transmit him orders for his Patent Churn, that the only obstacle that has hitherto prevented him from a more early fulfilling such orders, was the numerous applications he has of late received, and the multiplicity of other business under his immediate care and direction. The latter circumstance being partly removed, by engaging more workmen for the business, he is now able to execute their orders with greater facility and dispatch: And is happy to find this very useful invention is so generally introduced into the Dairy......... JOHN RASTRICK, Civil Engineer'[3]

1788 Built a lighthouse at Blyth

1796 Involved in the building of an iron bridge at Sunderland

1799 'To the PUBLIC. AN Advertisement having appeared in the Papers of last Week, from Mr. Meikle, the Patentee, or pretended Patentee, of Threshing Machines, contradicting in toto the Statement which I had laid before the Public, concerning the Action pending between us, as to the Right of erecting these Machines: I beg Leave to restate......JOHN RASTRICK, Civil Engineer, Morpeth, March 7th 1799.[5]

1801 Involved with the bridge at Weldon Mill, nine miles north of Morpeth

1822 Letter by John Rastrick. Dated Morpeth March 4th 1822 in which he claims that he invented the thrashing machine and that his invention was stolen by ‘so base a Scotchman’ who then went on to patent the idea.[6]

1826 June 8th. Died and left his estate to his four daughters and three sons.

A Paper Read before The Newcomen Society by H. W. Dickinson and Arthur Lee - Taken from The Engineer Journal of 1924/03/07.

"The family originated in what is now the parish and township of Rastrick - mentioned as Rastric in the Domesday Survey of 1083- in the West Riding of Yorkshire. There there lived from 1651 to 1729 a certain John Rastrick, who in the troublous times of the Revolution of 1688 he came impoverished and migrated to Morpeth in Northnmberland. His son William (1695- 1725) was a millwright at, Morpeth and his grandson John (1738-1826) followed the same occupation. It is with him that our story opens, for he was a man of considerable ability. He was the inventor of the "Imperial barrell churn," which was the earliest churn of any kind to be patented. The credit of having invented the thrashing machine, usually attributed to Andxew Meikle, was claimed by Rastrick, among others. It is not the place here to go into the early history of the machine. The genesis of Meikle's invention is stated to have been a model which was sent to him by Sir Francis Kinloch of Gilmerton, Bart, who had based his model on a machine he had seen erected by a Mr. Smart in 1772 at Wark, near Morpeth... " Read more here