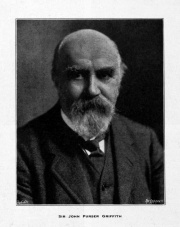 "...with regret that we record the death of Sir John Purser Griffith, the veteran civil engineer and Past President of the Institution of Civil Engineers, who died at Rathmines Castle, Dublin, on October 21st, at the age of ninety. He was Welsh by birth and received his early schooling in England, but, after passing through the Engineering School of Trinity College, Dublin, he spent almost the whole of his professional life in Ireland. In that country, amongst other activities, he was associated for a period of more that forty years with engineering works at the docks and harbour of Dublin..."[More].

He attended Doctor Biggs’ school at Devizes and Fulneck School at Leeds before going to Trinity College, Dublin, in 1865. After passing through the Engineering School in 1868 he started his pupilage with Dr. Bindon Blood Stoney, M.Inst.C.E.

He then served for a short period as assistant surveyor for Co. Antrim in 1870, under Mr. Alexander Tate, afterwards being appointed assistant to Dr. Stoney in 1871, with whom he served for 28 years.

He was appointed Chief Engineer to the Board in succession to Dr. Stoney in 1898, relinquishing this position in 1913. Throughout the whole of his association with the Dublin Port and Harbour Board, he was engaged on works of great magnitude, including the construction of roads, tramwiys, bridges, docks, quay walls, lighthouses, and stores. As an example, the great concrete blocks used in the North Quay extension of the port of Dublin contained more than 5,000 cubic feet of masonry and weighed about 360 tons. These were built above high-water level, and when sufficiently set were lifted and transported by a floating shears or crane, and deposited on a bed provided by steam dredging, and levelled by men working in a large diving bell, entered through a tube fitted with an air-lock.

His engineering interests extended also beyond Dublin. He was advisory engineer to the Government on harbour and foreshore works at Wicklow and on Arklow Harbour, and he was a member of the Vice-Regal Commission on bridges over the Suir at Waterford and the Shannon at Portumna. He was also a member of the Royal Commission on Canals and Waterways appointed in 1906. He received a knighthood in 1911. In 1913 Sir John was elected a Commissioner of the Irish Lights-a board which has charge of the lighthouses, beacons, and buoys around the coast of Ireland. During the War he was Chairman of the Dublin Dockyard War Munitions Company.

After his retirement from the Dublin Docks and Harbour Board he was chairman of the Irish Peat Inquiry Committee in 1917-1918 and of the Water Power Resources of Ireland sub-committee appointed by the Board of Trade in 1918. He became a Senator of the Irish Free State in 1922.

Late in his life he had the satisfaction of seeing his ideas for the utilization of the River Liffey come into favour, and his efforts were recognized by the Corporation of Dublin when, in 1936, it decided to confer the Freedom of the city upon him.

He delivered the James Forrest Lecture in 1916 on "Development of Appliances for Handling Raw Materials and Merchandise at Ports and other Large Centres of Traffic." He also read a Paper on "Improvement of the Bar of Dublin Harbour by Artificial Scour" in 1878-1879, for which he was awarded a Manby Premium. During his year of Presidency, he presented the chandeliers and painting of the central roof panel, executed by Mr. Charles Sims, R.A., in the Great Hall of The Institution.

He married in 1871 Anna Benigna Fridlezius Burser. She died in 1912. They had two sons and a daughter.