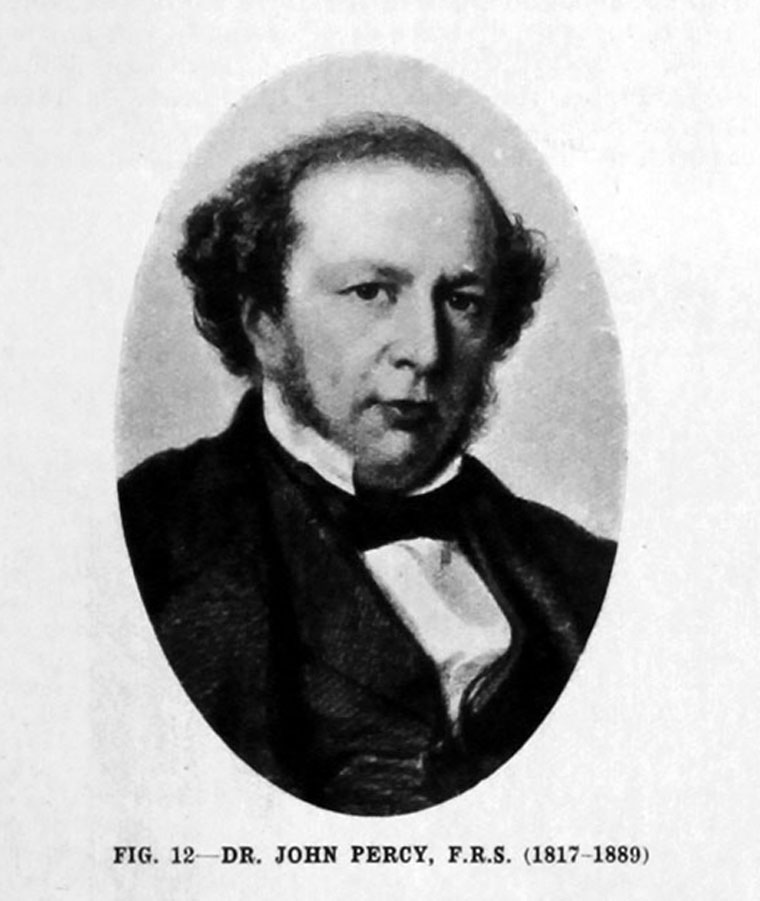 Percy went to the University of Edinburgh for 3 years and graduated M.D in 1839.

Dr. JOHN PERCY, who died at his residence, Gloucester Crescent, Paddington, on the 19th June last, was born at Nottingham on the 23rd March 1817. He received his early school education in that town, and afterwards went through a course of three years training at the University of Edinburgh, where he graduated M.D. in 1839.

Subsequently he proceeded to Paris, and took up further academic studies, which brought him into contact with some of the leading chemists of his day. This developed a taste for chemical research, in which he was afterwards destined to acquire so high a reputation. Having completed his academical career at Paris, he travelled for a time, and on returning to England began to practise as a medical man at Birmingham. Here he acted for some years as physician to the Queen's Hospital, and his investigations in physiology and pathology won for him considerable medical fame.

Dr. Percy, however, did not care to follow out a medical career, and concurrently with his professional studies and practice, he conducted researches in mineralogy and metallurgy, and especially into the constitution of crystallised slags, having the co-operation in these researches of the late Mr. David Forbes (formerly Foreign Secretary to the Iron and Steel Institute) and Professor W. H. Miller. Among the studies which these gentlemen took up, the more prominent were the alloys of copper with manganese and nickel, the effect of phosphorus on copper, and the composition and qualities of coal.

In 1851 the Royal School of Mines was established, and Percy accepted an invitation to become lecturer on metallurgy and metallurgist to the museum. He continued to hold this position for nearly thirty years, and only resigned in 1879, when the Government of the day resolved upon moving the metallurgical laboratory to South Kensington. Dr. Percy felt very strongly that this removal was a mistake, and even went so far as to offer to provide certain facilities, which were required to make the Royal School of Mines more complete, at his own expense, if the school was retained in Jermyn Street. He wrote, at the same time, a pamphlet on the subject, which was, published in some of the newspapers, and widely circulated, in which his reasons for relinquishing his position, and his arguments for the retention of the School of Mines at Jermyn Street, were fully set forth.

Besides his professional position, at the Royal School of Mines, Percy was lecturer on metallurgy to the advanced class of the Royal Artillery (now the Artillery College) from its foundation, in which capacity he was accustomed to make excursions into the country with his pupils in order to examine different works. Another important position which he filled for many years was that of superintendent of the ventilation to the Houses of Parliament, and the requirements of this position compelled him to be in attendance at Westminster every afternoon during the session, where, having a considerable amount of time on his hands, he was accustomed to receive and entertain his more select friends.

Between 1861 and 1880 Dr. Percy was engaged in producing his well-known metallurgical works, which embraced, in addition to his admirable and unique work on Iron and Steel, treatises on all the other principal metals, as well as fuel. He also took up the rarer metals, including nickel, bismuth, antimony, &c., but his labours in relation to these were unfinished at the time of his death. Some of the volumes on metallurgy went through several editions, and all of them were translated into French and German. He had intended, for many years, to issue a new edition of his "Iron and Steel," and had prepared very elaborate notes, and had stored up an immense amount of current information, with a view to this end. But of late years his energy did not seem to be equal to the herculean labour of carrying out his long-cherished desire, and the new edition has consequently never been published. For this reason the monumental work on Iron and Steel which Dr. Percy published as far back as 1861 remains the great textbook on the subject of this branch of metallurgy, and having long been out of print, copies are most difficult to procure.

In all Dr. Percy's labours there was involved a large amount of original investigation, a great deal of which was carried on in his private laboratory in Jermyn Street. In this laboratory he undertook a systematic investigation of the iron ores of Great Britain, suggested and assisted by the late Mr. S. H. Blackwell, as far back as 1861. The results of these labours, continued over several years, are embodied in his well-known treatise on Iron and Steel, and have rightly been described as the first great attempt at a just survey of our iron ore resources on a national scale. Amongst other labours which have been undertaken by Dr. Percy, and which have won for him a high place among discoverers in the metallurgic arts, were the determination of the effect of the Bessemer process on the composition of the metal, the production of aluminium from cryolite, the discovery of aluminium bronze, the chemistry of the amalgamation process, and the use of hyposulphite of soda for the extraction of silver.

Dr. Percy was greatly valued. by Government and other official circles for his special scientific knowledge, in consequence of which he was called upon to serve upon a number of Government inquiries, including both the earlier commissions on armour plates, and the commission which dealt with Admiralty work only two years ago, under the presidency of Sir James Stephen. He was also a member of the Argyll Commission, appointed in 1866 to inquire into the extent and duration of the coal supplies of the United Kingdom, and he served on the Royal Commission appointed to inquire into the spontaneous ignition of coal cargoes.

Although Dr. Percy never received the official recognition of his labours to which he was undoubtedly entitled, his attainments and his work were greatly appreciated. by scientific men. As a result and evidence of this, he was elected in 1885 the President of the Iron and Steel Institute, and served in that capacity for two years. He was also elected a fellow of the Royal Society, an honorary member of the Institution of Civil Engineers, and a member of the Athenaeum Club. He was one of the first honorary members of the Iron and Steel Institute, and was awarded the Bessemer gold medal of the Institute in 1877. The Albert gold medal of the Society of Arts was awarded to him on the day of his death, and in 1887 he was awarded the Millar prize of the Institution of Civil Engineers, which, however, he desired to have spent on the purchase of a microscope, equipped under Dr. Sorly's direction, with the appliances for the study of the micro-crystalline structure of metals, to.be at the disposal of any member of the Institution desirous of undertaking such studies, but who might be debarred from doing so by the costly character of the apparatus.

Dr. Percy was a man of strong physique and commanding presence, and he inspired very largely the respect, as well as the affection, of many distinguished students that he had the honour of training. Among his earlier students were Mr. G. J. Snelus, F.R.S., and Mr. Weston (who is now chemist to the Admiralty), Mr. P. C. Gilchrist, Mr. Hilary Bauerman, and others who have taken a leading position in the metallurgical world.

Dr. Percy was a man of considerable literary and artistic attainments, which were evidenced by his possession of a magnificent metallurgical library in his house at Gloucester Crescent, and of one of the best representative collections of modern English water-colour artists extant.

. . . . In 1851, upon the foundation of the Royal School of Mines, by the late Sir H. T. DelaBeche, Dr. Percy accepted the position of lecturer upon metallurgy, and Metallurgist to the Museum of Practical Geology, which offices he retained until 1870, having given up medical practice on leaving Birmingham. . . . [more]

.... Notwithstanding his long career in the public service, Dr. Percy never became the recipient of any official honours. This, however, may perhaps be due to his retiring disposition and special dislike to honorary distinction of all kinds, which even went so far as to the refusal of the title of Professor, he having invariably described himself as lecturer in the two establishments where he was engaged in teaching. It was otherwise, however, with his fellow scientific men, by whom his labours were fully honoured. He became a Fellow of the Royal Society after the publication of his medical researches, and subsequently an honorary member of the Institution of Civil Engineers, and of the Iron and Steel Institute, of which latter body he was president in 1883-5, and from whom he also received the Bessemer medal. On the same day that his death was announced, the award to him of the Albert gold medal of the Society of Arts was made public in a very feeling notice which appeared in the last number of the Society of Arta Journal. He was awarded the Miller prize of the Institution of Civil Engineers in 1887, but with characteristic liberality desired that it might be spent on the purchase of a microscope equipped under Dr. Sorby's direction, with the appliances for the study of the micro-crystalline structure of metals, to be at the disposal of any member of the Institution desirous of undertaking such studies, but who might be debarred from doing so by the necessarily costly character of the apparatus....[more]