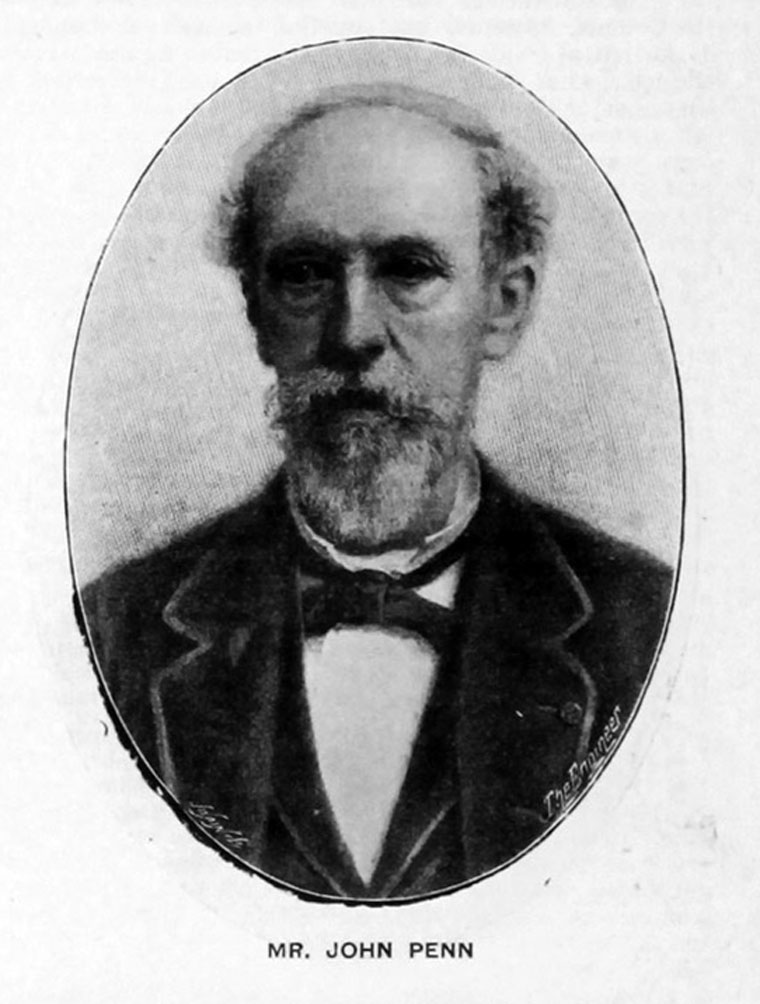 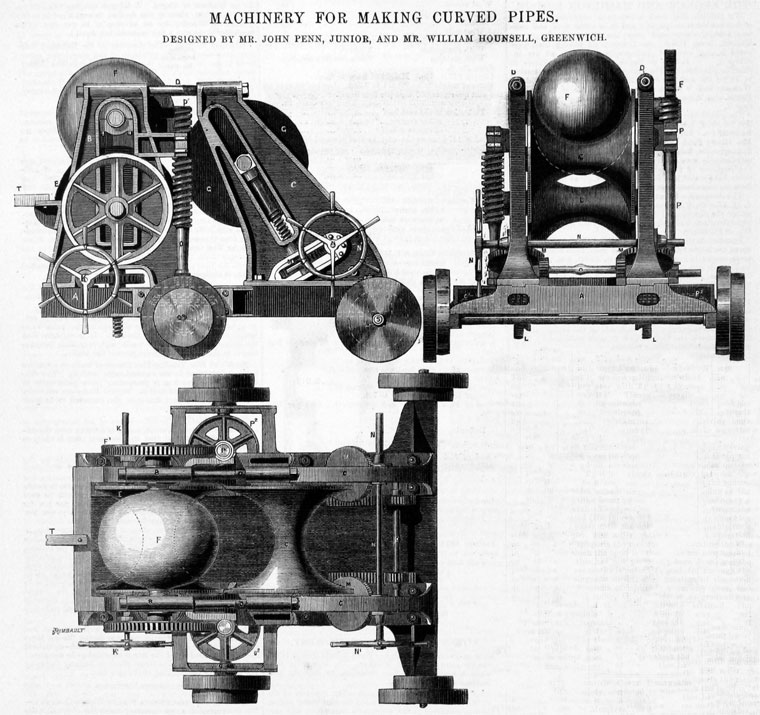 John Penn was the son of the marine engineer John Penn. He was educated at Harrow School and Trinity College, Cambridge. Though he managed his father's firm, John Penn and Sons, he was not trained as an engineer. He was apparently "one of the best-known Parliamentary golfers, having a fine private course at Archerfield, North Berwick

JOHN PENN, M.P., was born at Lewisham, Kent, on 30th March 1848, being the son of the late Mr. John Penn and grandson of the founder of the firm of John Penn and Sons, marine engineers, of Greenwich and Deptford.

He was educated at Harrow School, subsequently proceeding to the University of Cambridge.

On leaving the University about 1867 he proceeded to take charge of his father's works, and directed his attention principally to the design and manufacture of warship machinery which should embody the latest improvements, as instanced in H.M.SS. "Crescent," "Magnificent," and "Goliath."

In 1888 the firm was converted into a private company, but has since been absorbed in the Thames Ironworks Shipbuilding and Engineering Co.

He was a director of the Great Eastern Railway Co., and also of the Kent Waterworks Co.

After an illness lasting for more than a year, his death took place on 21st November 1903, in his fifty-sixth year.

JOHN PENN, M.P., died at his residence, 22 Carlton House Terrace, on the 21st November, 1903, at the comparatively early age of 55. The eldest son of the late Mr. John Penn, F.R.S., he was born at Lewisham on the 30th March, 1848, and, after being educated at Harrow and at Trinity College, Cambridge, assisted at an early age in the management of the firm of John Penn and Sons, marine engineers, of Greenwich and Deptford; and when, later, the business was converted into a limited company, he assumed its chairmanship.

Soon after joining the firm Mr. Penn turned his attention to an arrangement of 3-cylinder expansive vertical engines, the three cylinders being of the same size and worked expansively at 60 lbs. pressure for full power, and for half-power worked compound (i.e. high pressure in one cylinder only, the steam exhausting into the other two) by an arrangement of stop valves. These engines were put forward as good for maneuvering purposes, and were found to be able to run evenly at a very low number of revolutions per minute. This type was fitted in the 'Northampton,' 'Ajax' and 'Agamemnon' in the British Navy, and in several vessels of the Italian Navy, notably the 'Christoforo Colombo,' the 'Italia' and the 'Lepanto.'

In 1893-95 Mr. Penn was much interested in the question of induced as compared with forced draught for increasing the evaporative performance of boilers. He was of opinion that, in addition to the advantage of open stokeholds, there would be less risk of damage to the boiler under induced draught, and that there would always remain a better chance of maintaining a high power in the engines in the event of the funnels of a war-ship being shot away. Such apparatus was fitted to the boilers of H.M.S. 'Magnificent' and 'Illustrious,' twin-screw battle-ships with triple expansion engines of 12,000 BP. and 150 lbs. working pressure, which passed through successful trials.

The introduction of water-tube boilers and 300-lbs. steam pressure caused a revolution in design, and with the exception of the machinery for the cruisers 'Paotolus' and 'Pomona,' and for the battleship 'Goliath,' Mr. Penn had had but little to do with vessels of this type when he retired from business in 1899.

Mr. Penn was M.P. for Lewisham from 1891, and his experience of marine engineering gave weight to his opinion on naval matters in the House. The high tone of his business relations and his constant regard for the reputation of the name he inherited were always recognized. He was kind and generous, and enjoyed the high esteem of those in his employment at Greenwich.

He was a Director of the Kent Waterworks and of the Great Eastern Railway Company. In his leisure moments he was a keen cricketer, a good shot and an enthusiastic golfer, in which last capacity he was always to be found in the various Parliamentary handicaps.

Mr. Penn was elected an Associate of the Institution on the 3rd February, 1874, was subsequently placed among the Associate Members, and was transferred to the class of Members on the 27th January, 1880.

"...John Penn, whose death at the comparatively early ago of fifty-five we regret to have to record, was the son of the late Mr. John Penn, of the Cedars, Lee, Kent, and grandson of the founder of the noted firm of John Penn and Sons, marine engineers, of Greenwich and Deptford.

In our issue of this journal of January 20th, 1899, when giving some brief biographical notices of the originators of some of the shipbuilding and marine engineering establishments in the Thames district in the Victorian era, men who have helped to make that era the most noteworthy in the history of the world, we necessarily included among those worthies the father and grandfather of the late Mr. Penn, the subject of our present notice. The late..."[More].