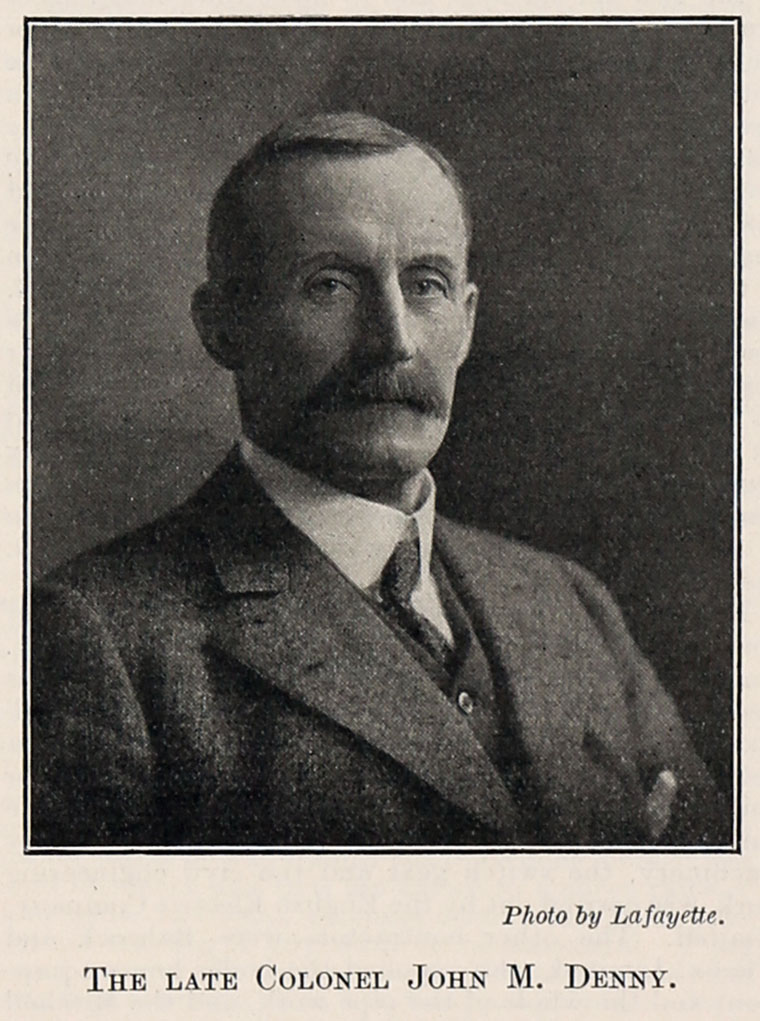 Born in Dumbarton and educated at Dumbarton Academy and in Lausanne, he was a shipbuilder and a director of the Lanarkshire and Dumbartonshire Railway

He was elected at the 1895 general election as the Member of Parliament (MP) for Kilmarnock Burghs, and re-elected in 1900, holding the seat until standing down at the 1906 general election.

During the First World War he was chairman of the Dumbartonshire Territorial Force Association, and became an honorary colonel in the Argyll and Sutherland Highlanders.

Britain can still be proud of the fact that she still possesses some industrial organisations whose partners have that high sense of duty which prompts their enthusiastic endeavours for the welfare of their workers and for the good of the community. The firm of William Denny and Brothers, of Dumbarton, on whose activity the town, so much depends, has always had among its partners some who were leaders in every form of social and philanthropic work. A founder, of the firm, Peter Denny, LL.D,, had this great sense of duty, and his son, Colonel John M‘Ausland Denny, who died last Saturday in a Glasgow nursing home, preserved throughout his life the high traditions established by his parent. Dumbarton is in mourning for a chieftain for whom the affection of his workers, fellow-townsmen and those with whom he associated in business is reminiscent of that of the clansmen of old for their chief.

Colonel Denny was the fourth son of Dr. Denny, and was born in Dumbarton in 1858. He was educated in his native town and in Lausanne, in Switzerland. Following a course of training for the business side of shipbuilding, he entered the firm at the age of 17. A characteristic of the family—of training the younger members for those specific activities in the business for which they promised greatest fitness—was adhered to, and Colonel Denny began his career in the counting-house. Here he had to conform to the rules enforced on all other apprentices. The wisdom of these measures is borne out by the success attending their use. The Colonel knew his fellow-workers in the organisation as could never otherwise have been the case, and they appreciated him for his sterling worth. He was instrumental in obtaining many of the continental shipbuilding orders received by the firm, and spent a considerable amount of time in the business centres of Europe to keep in touch with foreign shipowners. The success of his early endeavours to obtain a portion of the continental trade awakened some of the foreign governments, and both the Germans and the Belgians made regulations that no building of subsidised ships could be allowed in other than their own lands. Colonel Denny took a part in 1901 in the co-operation of his firm with the Parsons Marine Steam Turbine Co in the production of the first commercial turbine steamer, the King Edward, which is still in successful use on the Clyde. From this beginning sprang the great development in this method of propulsion, in which Colonel Denny always took a part.

In 1919 he was elected chairman of the company. In this position he took a close personal, interest in industrial questions and welfare work. His bright, genial personality won for him friends among all ranks and classes of men, and with his capability and enterprise he was able to maintain the world-wide reputation of his firm.

Colonel Denny was elected M.P. for the Kilmarnock District of Burghs, in which Dumbarton was then included, in 1895, and retained the seat in the Unionist interest until 1906, when he retired from his political work. His constituents, both Unionist and Liberal, marked the esteem in which he was held by presenting to him his portrait, painted by George Henry, R. A. As a Member of Parliament Colonel Denny rendered great service in all matters concerning shipping, and ship-building, and served on important committees concerned with the treatment of seamen, and the causes of the increases of foreigners in the Mercantile Marine. He was an enthusiastic worker in the Volunteer movement, and joined in 1876 as a private, with many of the workmen of the firm of which he was a partner. Two years later he obtained his commission, and he rose to the rank of Colonel of the 9th Argyll and Sutherland Highlanders, alter 19 years’ service. During the war he acted as commanding officer to two battalions of the Territorial Force, and as Dumbartonshire Director of the Red Cross Society.

He was a director of the Caledonian Railway Co, the Commercial Bank of Scotland, and other companies."