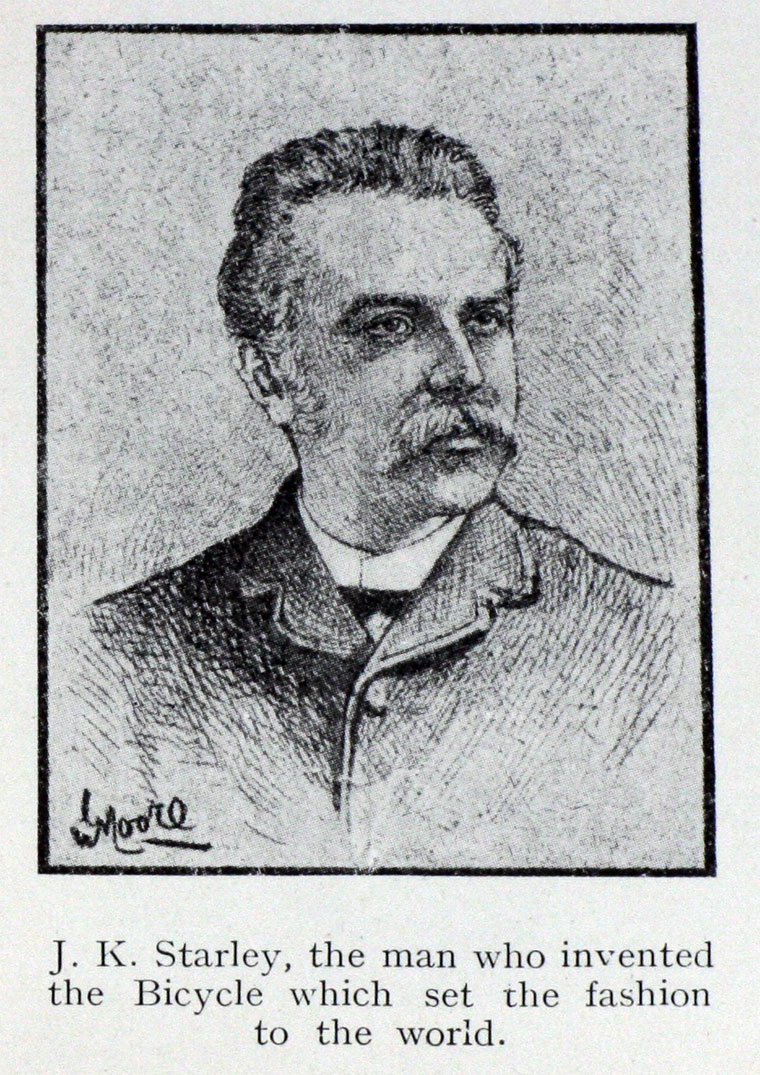 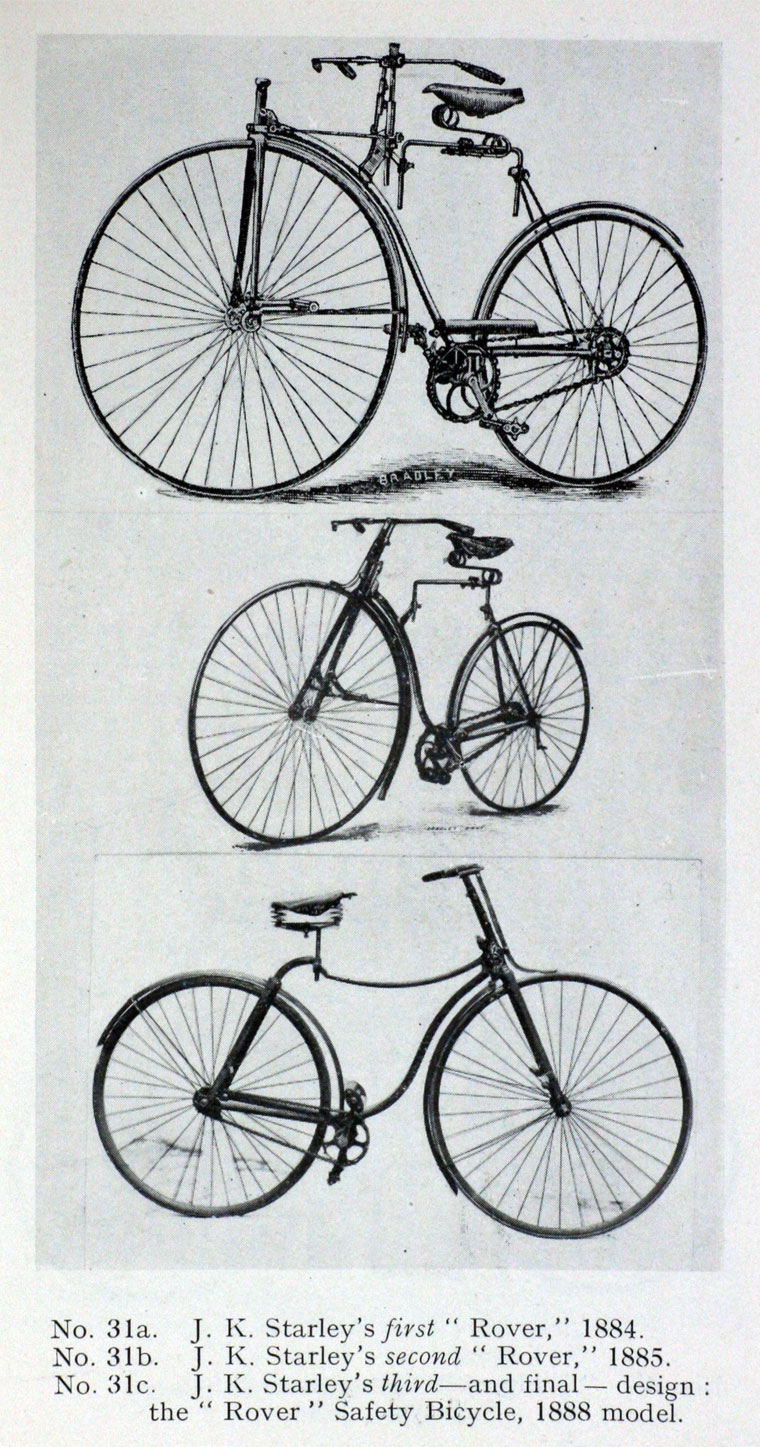 John Kemp Starley (1854-1901) was an English inventor and industrialist who is widely considered to be the inventor of the modern bicycle, and also originator of the name Rover.

1854 Starley was born in Walthamstow, Essex, the son of a John Starley, a gardener, who was the older brother of James Starley.

1872 John Kemp moved to Coventry to work with his uncle, the inventor James Starley. He worked with his uncle and William Hillman for several years building Ariel cycles.

1877 John Starley worked for cycle makers Haynes and Jefferis (later Rudge) with responsibility for the machinery.

1877/8 He started a new business Starley and Sutton Co with William Sutton - a local cycling enthusiast. They set about developing safer and easier to use bicycles than the prevailing penny farthing or "ordinary" bicycles. They started by manufacturing tricycles.

By 1883 Starley and Sutton's products were being branded as Rover.

In 1885 Starley made history when he produced the Rover Safety Bicycle - a rear-wheel-drive, chain-driven cycle with two similar-sized wheels, making it more stable than the previous high wheeler designs. Cycling Magazine said the Rover had 'set the pattern to the world' and the phrase was used in their advertising for many years. Starley's Rover is usually described by historians as the first recognisably modern bicycle. This new "safety bicycle" was an immediate success and was exported across the world.

1901 Q4. JKS died suddenly and was succeeded as managing director of the firm by Harry Smith. After his death the Rover Company began building motorcycles and then cars.

31a. Shows J. K. Starley's first 'Rover' safety, as exhibited at the Stanley Show, 28th January to 3rd February, 1885. No suitable building being available, the Stanley Bicycle Club hired a huge tent and erected it on a piece of ground adjoining the Thames Embankment, near Blackfriars Bridge. In this temporary shelter the show was staged, J. H. Price being Hon. Organiser. The 'Rover' had a 36 inch front wheel, bridle-rod steering, and the channel shaped seat-pillar formed part of the actual frame. It is interesting to recall that this was the only feature of the machine which Starley patented.

31b. Within a few weeks Starley (at the suggestion of Stephen Golder, a Coventry pressman,) sloped the forks, making the steering direct. For a short time he retained the original form of seat-pillar, but later discarded it in favour of the ordinary angle pin: the result was the model used in the historic 100 miles race of September, 1885; the illustration reproduces the makers' full-page advertisement in a paper of the period.

31c is the type of which a specimen is to be seen in the Bartleet Collection. It is geared to 56 inches, weighs 38.75 lbs., and was purchased in Hereford. This marked the final development of Starley's experiments, and remained current for several years.

The actual machine in the Collection is probably an 1888 model: it has curved forks of hollow tubular section, and a feature worth noting is the provision of small "eyes" brazed to the fork blades near their lower extremities, to which the mudguard-stays were bolted; these facilitated the removal of the mud-guards without touching the axle nuts — an improvement which was hailed as novel when re-introduced 30 years later!

John Kemp Starley (Plate 46) was born on 14th December, 1854, and died on 29th October, 1901; he was the son of James Starley's elder brother John. He worked as a mechanic at Haynes and Jefferis's Ariel Works, from 1871, and lodged with his uncle, James Starley.

He started business on his own account in 1877 or 1878, later being joined by William Sutton, previously the proprietor of a haberdashery business in Coventry. The business developing, Mr. George Franks (a retired diamond merchant) became associated with Messrs. Starley and Sutton, and it was he who evolved the name 'Rover' for the firm's product.

It has been claimed that J. K. Starley patented a safety bicycle on the general lines of his 1885 'Rover' as far back as September, 1879, but no trace of this can be found at the Patent Office; it seems tolerably certain that he did not actually construct one till late in 1884; direct steering by means of sloping forks was said to have been mentioned in his 1879 specification.

As previously mentioned, direct sloping front forks were included in Lawson's specification No. 3924/1879 but he never used them: it was left to J. K. Starley to substitute sloping forks for bridle-rods.

In 1888 the title of the firm was changed from Starley and Sutton Co to J. K. Starley and Co, the first advertisement bearing the new name appearing in The Cyclist, 5th September, 1888. [4]