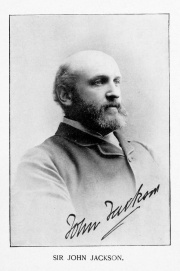 After university, he returned to Newcastle, and worked for his brother, William Edwin Jackson (who was 22 years old and a well-established contractor).

1875 Established his own firm

His first large contract was for the Stobcross Docks contract no. 4 in Glasgow, although the clients hesitated as Jackson was rumoured to be only 25 (which was true).

Owned a shipping line, the Westminster Shipping Co Ltd, which transported his machinery and materials all over the world

1894 Completed work on the Manchester Ship Canal in two-thirds of the contract time, which earned him a knighthood in 1895

1898 The business was incorporated as Sir John Jackson Ltd

1896–1907 During the Keyham Dockyard contract, Jackson and his family lived on the outskirts of Plymouth, while retaining a house in Holland Park, London.

1910 Elected to represent Devonport in Parliament as a Unionist

He was educated at York and at the University of Edinburgh, and served his pupilage in the mechanical engineering workshops of Messrs. Thompson and Boyd at Newcastle-on-Tyne: he subsequently entered as an engineering student at Edinburgh University, where he followed courses under Professors Fleming-Jenkin and Tait.

In 1901 he founded, in memory of the latter, the "Tait Memorial Fund" for research work. After leaving the University he had a further three years' training with his late brother, becoming subsequently junior partner. He undertook the first contract on his own account at the age of twenty-four, and in the following year secured his first large contract — the completion of the Stobcross Docks at Glasgow, which he finished before he was twenty-nine years of age.

Since then he undertook large contracts with unvarying success; these comprised extensive dock and harbour work, both in the United Kingdom and abroad, some of the earliest being the docks at Middlesbrough and Hartlepool and the harbour at North Sunderland.

He also executed the last eight miles of the Manchester Ship Canal, in connexion with which he was knighted in the year 1895.

His works abroad are too numerous to mention here, but those of the Admiralty Harbour, Simon's Bay, South Africa, at the opening of which by the Duke of Connaught he received the Companionship of the Victorian Order; the great barrage across the Euphrates at Hindia, near Babylon, the Singapore Harbour, and the breakwater at Victoria, British Columbia, may be cited.

His death took place at Godalming on 14th December 1919, in his sixty-ninth year.

He became a Member of this Institution in 1899.