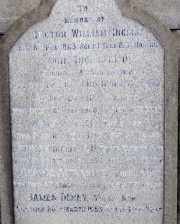 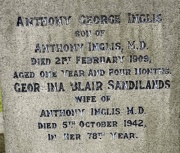 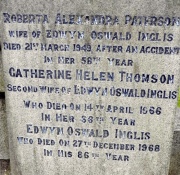 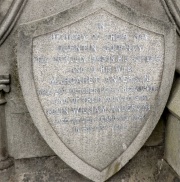 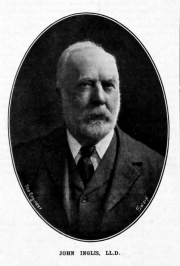 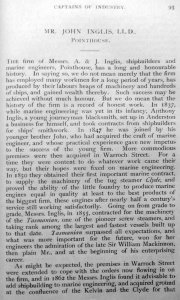 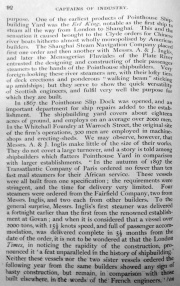 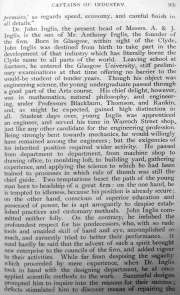 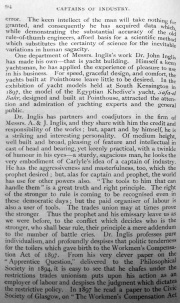 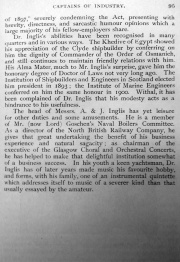 THE firm of Messrs. A. & J. Inglis, shipbuilders and marine engineers, Pointhouse, has a long and honourable history,. In saying so, we do not mean merely that the firm has employed many workmen for a long period of years, has produced by their labours heaps of machinery and hundreds of ships, and gained wealth thereby. Such success may be achieved in much honour. But we do mean that the history of the firm is at record of honest work.

In 1837, while marine engineering was yet in its infancy, Anthony Inglis, a young journeyman blacksmith, set up in Anderston a business for himself, and took contracts from shipbuilders for ships' smithwork.

In 1847 he was joined by his younger brother John, who had acquired the craft of marine engineer, and whose practical experience gave new impetus to the success of the young firm. More commodious premises were then acquired in Warroch Street. For a time they were content to do whatever work came their way, but their hopes were fixed on marine engineering.

In 1850 they obtained their first important marine contract, to supply the machinery of the tug steamer ‘Clyde’, and proved the ability, of the little foundry to produce marine engines equal in quality at least to the best products of the biggest firm, these engines after nearly half a century's service still working satisfactorily.

Going on from grade to grade, Messrs. Inglis, in 1855, contracted for the machinery of the ‘Tasmanian’, one of the pioneer screw steamers, and taking rank among the largest and fastest vessels built up to that date. ‘Tasmanian’ surpassed all expectations, and what was more important for the future, won for her engineers the admiration of the late Sir William Mackinnon, then plain Mr., and at the beginning of his enterprising career.

As might be expected, the premises in Warroch Street were extended to cope with the orders now flowing in on the firm, and in 1862 the Messrs. Inglis found it advisable to add shipbuilding to marine engineering, and acquired ground at the confluence of the Kelvin and the Clyde for that

They do not covet a large turnover, and a story is told among shipbuilders which flatters Pointhouse Yard in comparison with larger establishments. "In the autumn of 1897 the Transatlantic Company of Paris ordered no fewer than ten fast mail steamers for their African service. These vessels were all built from one specification; the requirements were stringent, and the time for delivery very limited. Four steamers were ordered from the Fairfield Company, two front Messrs. Inglis, and two each from other builders. To the general surprise, Messrs. Inglis's first steamer was delivered a fortnight earlier than the first from the renowned establishment at Govan and when it is considered that a vessel over 2000 tons, with 15.5 knots speed, and full of passenger accommodation, was delivered complete in 5 months from the date of the order, it is not to be wondered at that the London Times, in noticing the rapidity of the construction, pronounced it 'a feat unparalleled in the history of shipbuilding.’ Neither these vessels nor the two sister vessels ordered the following year from the same builders showed any sign of hasty construction, but remain, in comparison with those built elsewhere, in the words of the French engineers, 'bon premiers,' as regards speed, economy, and careful Finish in all details."

Dr. John Inglis, the present head of Messrs. A. & J. Inglis, is the son of Mr. Anthony Inglis, the founder of the firm. Born in Glasgow, within sight of the Clyde, John Inglis was destined from birth to take part in the development of that industry which has literally borne the Clyde name to all parts of the world.

Leaving school at fourteen, he entered the Glasgow University, stiff preliminary examinations at that time offering no barrier to the would-be student of tender years. Though his object was engineering science, the young undergraduate passed through a good part of the Arts course. His chief delight, however, was in mathematics, natural philosophy, and engineering, under Professors Blackburn, Thomson, and Rankin, and, as might be expected, gained high distinction in all.

Student days over, young Inglis was apprenticed an engineer, and served his time in Warroch Street shop, just like any other candidate for the engineering profession. Being strongly bent towards mechanics, he would willingly have remained among the engineers; but the exigencies of his inherited position required wider activity. He passed from department to department, from machine shop to drawing office, to moulding loft, to building yard, gathering experience, and applying the science to which he had been trained to processes in which rule of thumb was still the chief guide.

Two temptations beset the path of the young man born to headship of a great firm on the one hand, he is tempted to idleness, because his position is already secure: on the other hand, conscious of superior education and possessed of power, he is apt arrogantly to despise established practices and customary methods. John Inglis committed neither folly. On the contrary, he imbibed the profoundest respect for his predecessors, who, with so rude tools and unaided skill of hand and eye, accomplished so much, and earnestly tried to better their performance. It need hardly be said that the advent of such a spirit brought new enterprise to the councils of the firm, and added vigour to their activities. While far from despising the sagacity which proceeded by mere experience, when Dr. Inglis took in hand with the designing department, he at once applied scientific methods to the work. Successful designs prompted him to inquire into the reasons for their success defects stimulated into to discover means of repairing the error. The keen intellect of the man will take nothing for granted, and consequently he has acquired data which while demonstrating the substantial accuracy of the old rule-of-thumb engineers, afford basis for a scientific method which substitutes the certainty of science for the inevitable variations in human sagacity.

One department of Messrs. Inglis's work Dr. John Inglis has made his own - that is yacht building. Himself a keen yachtsman, he has applied the experience of pleasure to use in his business. For speed, graceful design, and comfort, the yachts built at Pointhouse leave little to be desired. In the exhibition of yacht models held at South Kensington in 1897, the model of the Egyptian Khedive's yacht, ‘Safa-el Bahr’, designed and built at Pointhouse, attracted the attention and admiration of yachting experts and the general Dr. Inglis has partners and coadjutors in the firm of Messrs. A. and J. Inglis, and they share with him the credit and responsibility of the works; but, apart and by himself, he is a striking and interesting personality. Of medium height, well built and broad, pleasing of feature and intellectual in cast of head and bearing, yet keenly practical, with a twinkle of humour in his eyes — a sturdy, sagacious man, he looks the very embodiment of Carlyle's idea of a captain of industry. He has the aggressiveness and masterfulness, too, which the prophet desired; but, alas for captain and prophet, the world has use for other powers also. "The tools to him that can handle them" is a great truth and right principle. The right of the stronger to rule is coming to be recognised even in these democratic days; but the paid organiser of labour is also a user of tools. The trades union may at times prove the stronger. Thus the prophet and his emissary leave us as we were before, to the conflict which decides who is the stronger, who shall bear rule, their principle a mere addendum to the number of battle cries. Dr. Inglis professes pure individualism, and profoundly despises that politic tenderness for the toilers which gave birth to the Workmen's Compensation Act of 1897. From his very clever paper on the "Apprentice Question," delivered to the Philosophical Society in 1894, it is easy to see that he chafes under the restrictions trades unionism puts upon his action as an employer of labour and despises the judgment which dictates the restrictive policy. In 1897 he read a paper to the Civic Society of Glasgow, on "The Workmen's Compensation Act of 1897," severely condemning the Act, presenting with brevity, directness, and sarcastic humour opinions which a large majority of his fellow-employers share.

Dr. Inglis's abilities have been recognised in many quarters and in various ways. The Khedive of Egypt showed his appreciation of the Clyde shipbuilder by conferring on him the dignity of Commander of the Order of Osmanich, and still continues to maintain friendly relations with him. His Alma Mater, much to Mr. Inglis's surprise, gave him the honorary degree of Doctor of Laws not very long ago. The Institution of Shipbuilders and Engineers in Scotland elected him president in 1893; the Institute of Marine Engineers conferred on him the same honour in two. Withal, it has been complained of Dr. Inglis that his modesty acts as a hindrance to his usefulness.

The head of Messrs. A. and J. Inglis has yet leisure for other duties and some amusements. He is a member of Mr. (now Lord) Goschen's Naval Boilers Committee. As a director of the North British Railway Company, he gives that great undertaking the benefit of his business experience and natural sagacity; as chairman of the executive of the Glasgow Choral and Orchestral Concerts, he has helped to make that delightful institution somewhat if- a business success. In his youth a keen yachtsman, Dr. Inglis has of later years made music his favourite hobby. and f-ins, with his family, one of an instrumental quintette which addresses itself to music of a severer kind than that usually essayed by the amateur.