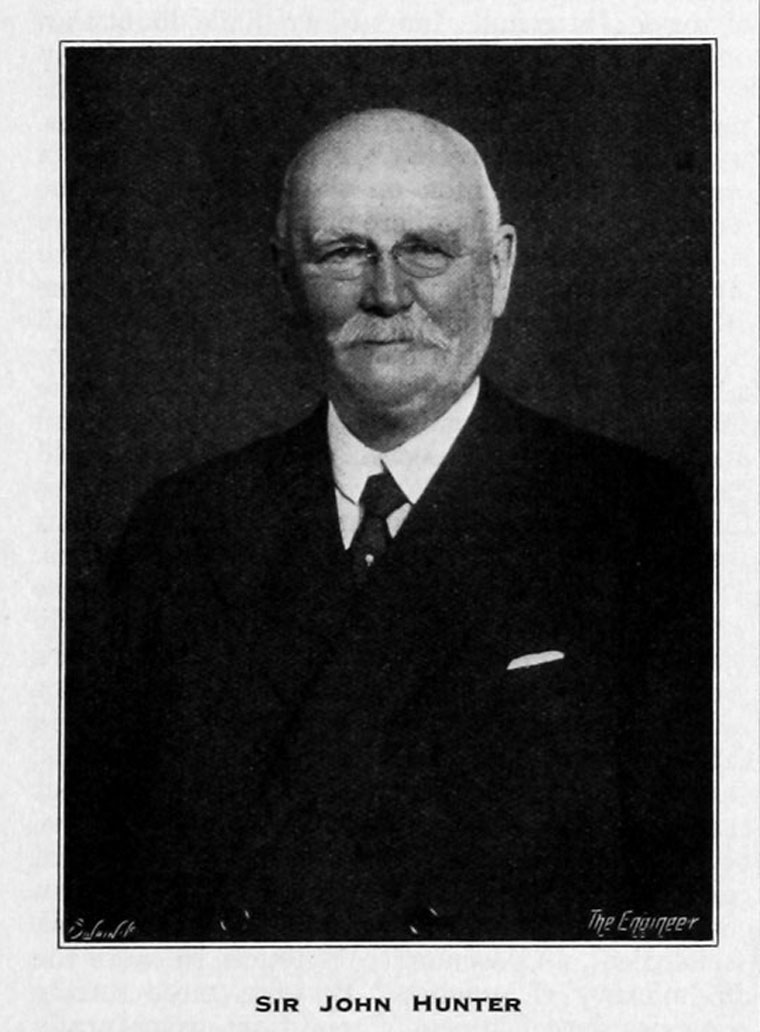 Sir JOHN HUNTER, whose death, at the age of seventy-two, took place at his home, 3, Kirklee-road, Glasgow, on Saturday morning, October 17th, following a short illness, was during his whole career associated with Sir William Arrol and Co., Ltd., of Bridgeton, Glasgow, and was the chairman of that firm until his retirement early this year. By his death Clydeside has lost a leading industrialist and the British steel and engineering industry an outstanding figure, who rendered great service to his country.

John Hunter was born in Paisley on November 8th, 1863. He was the son of the late Mr. John Hunter, of Montreal, who, it may be remembered, started the Canadian branch of J. and P. Coats, Ltd.

At an early age he returned to Canada with his parents and received his education at the Montreal High School.

In 1882 he came back to Scotland with the intention of returning to Canada when he had gained sufficient engineering experience with the firm of his uncle, Sir William Arrol.

After serving two years, however, he was invited to become a permanent. member of the staff. In the following years promotion came rapidly, and he held the successive positions of secretary, Joint managing director, managing director, and chairman of the company. During his career many noteworthy bridges were built by Sir William Arrol and Co., Ltd., including the Forth Bridge, the present Tay Bridge, the Tower Bridge over the Thames, and railway and road bridges in Glasgow and other parts of the country and abroad. John Hunter served in every department of his firm and knew intimately its varied work of bridge and dock construction, and the building of cranes and engineering works. To him was due, in no small measure, the rise of the firm from an undertaking with comparatively small capital to its present leading position in the constructional engineering world.

When the war broke out John Hunter placed at the disposal of the Government his unrivalled experience in the building of factories and engineering plants. He was a member of the Munitions Council from its inception, and in October, 1915, on the invitation of Mr. Lloyd George, became Director of Factory Construction, resigning his directorship of Sir William Arrol and Co., Ltd., to undertake that work. He was directly responsible for the erection and construction of the national projectile factories and also many other factories for industrial and war work. His wide experience in the control and organisation of large industrial under takings proved most valuable, and no fewer than fifteen factories were erected on various sites in England and Scotland under his direction. In some instances the work was so quickly and thoroughly carried out that shells were produced in less than six months after the decision had been taken to build the factory.

In 1916 John Hunter undertook new duties on his appointment as Director of Steel Production, in which office he became personally responsible for the supply and distribution of steel for the construction of new factories or the extensions to existing plant and also the supply of new machinery. Here again his wide knowledge proved indispensable for the task he undertook, and the work he was able to do for the nation. This work received recognition in 1917, when a K.B.E. was conferred upon him. Further honours bestowed upon him included those of Chevalier Legion d'Honneur, Officier de l'Ordre de Leopold, Commander of the Crown of Italy, and a Member of the Order of St. Anne of Russia.

Early in 1918 Sir John became a member of the Air Council, and as Administrator of Works and Buildings for the Air Ministry took over the whole of the building programme of the Royal Air Force, which work had been formerly carried out by the Admiralty and the War Office. In the course of his Government work he did unrivalled service on many Government Committees and his services were often requisitioned for consultative and advisory purposes.

In 1919 he returned to Glasgow as managing director of Sir William Arrol and Co., Ltd. He was a Vice-President of the Federation of British Industries and chairman of the Rivet, Bolt and Nut Company, Ltd., of Airdrie, and also until quite recently a director of the Iron Trades Employers' Insurance Association. Early in the present year he decided to retire from the chairmanship of Sir William Arrol and Co., Ltd., but he continued to serve on the board of directors. He had a real interest in the true welfare of the British steel and engineering industries and his death will be deeply regretted by a wide circle of business and personal friends,