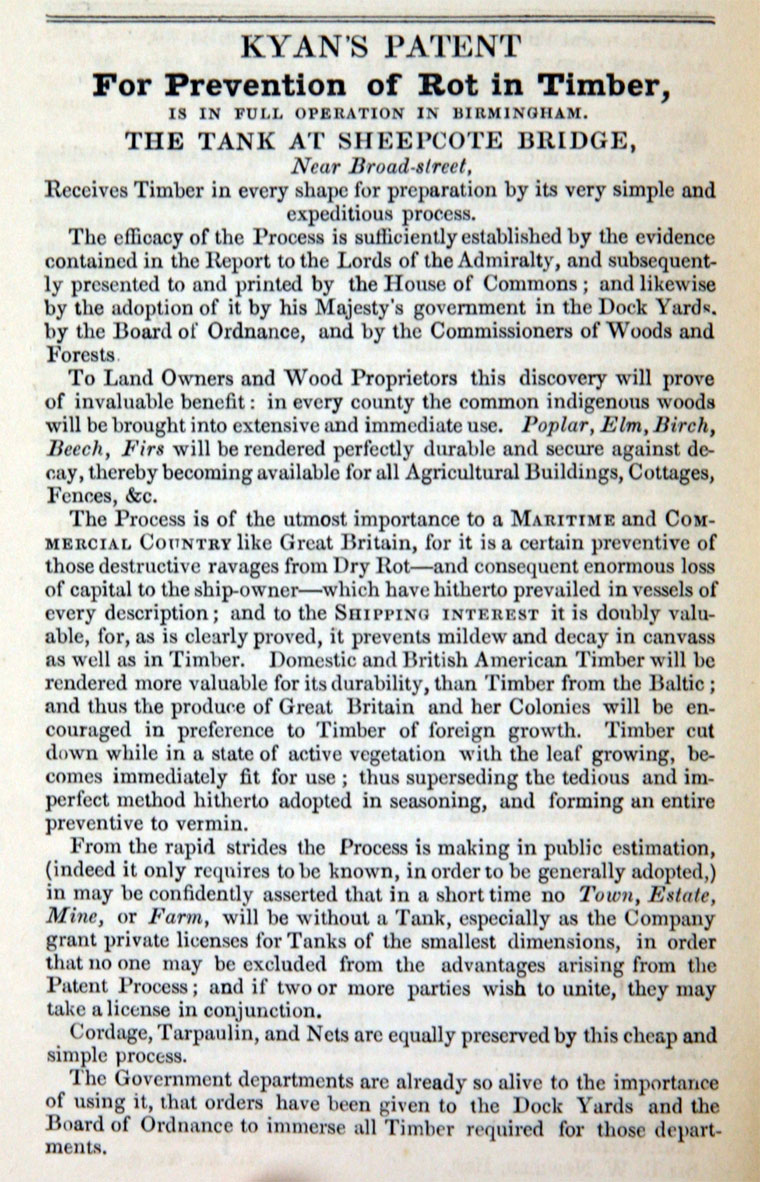 John Howard Kyan (1774-1850) was the inventor of the 'kyanising' process for preserving wood.

1774 November 27th. Born in Dublin the son of Howard Kyan of Mount Howard and Ballymurtagh, County Wicklow and his wife Frances Esmonde. His father was the owner of valuable copper mines in Wicklow (now worked by the Wicklow Copper Mines Co) and, for some time, worked them himself.

Educated to take part in the management of the mines, but soon after he entered the company its fortunes declined, and in 1804 his father died almost penniless.

For a time Kyan was employed at some vinegar works at Newcastle upon Tyne, but subsequently removed to London, to Greaves's vinegar brewery in Old Street Road.

1806 Bankrupt. '...John Howard Kyan and Edward Hoskins, of Wapping-Dock-Street, and Paddington-Street, both in the County of Middlesex, Coal-Merchants, Copartners, Dealers and Chapmen, and they being declared Bankrupts...'[1]

1811 Bankrupt. 'John Howard Kyan, formerly of Howland-Street, Fitzroy Square, in the County of Middlesex, and late of Great Smith Street, in the City of Westminster, formerly in Partnership with Edward Hoskins, in Great Smith Street aforesaid, Rectifying Distiller and Wine Merchant.'[2]

The decay of the timber supports in his father's copper mines had already directed his attention to the question of preserving wood, and as early as 1812 he began experiments with a view to discovering a method of preventing the decay. Eventually he found that bichloride of mercury or corrosive sublimate, as it was commonly called, gave the best results and, without revealing the nature of the process, he submitted a block of oak impregnated with that substance to the Admiralty in 1828. It was placed in the 'fungus pit' at Woolwich, where it remained for three years exposed to all the conditions favourable to decay. When taken out in 1831, it was found to be perfectly sound, and after further trials it still remained unaffected.

1832 Kyan patented his discovery (Nos. 8263 and 6309), extending the application of the invention to the preservation of paper, canvas, cloth, cordage, etc.

1837 Extension of patent. 'Inventions of John Howard Kyan, formerly of South-row, Euston-square, in the county of Middlesex, but now of Ailsa-park Cottage, Twickenham, in the said county of Middlesex, Esq. of 'A new mode of preserving certain vegetable Substances from decay,' and of 'An improved mode of preserving Paper, Canvass, Cloth, and Cordage for Ships and other uses, and the raw materials of Hemp, Flax or Cotton from which the same "may wholly or in part be made,' which said two several Inventions are commonly known by the name of Kyan's Patents.'[3]

1838 Partnership dissolved. 'The Partnership between the undersigned, as Distillers, at Battersea, has been this day dissolved by mutual consent.— Dated the 19th-day of December 1838. John Howard Kyan. Thos. Green. Jno. M'Carty.'[4]

The preservative action of a solution of bichloride of mercury was previously well known, and Kyan's process merely consisted in the submersion of timber or other materials in a tank containing a solution of corrosive sublimate in water. It was maintained by the inventor that permanent chemical combination took place between the mercurial salt and the woody fibre, but this was contested.

The process attracted great attention. Faraday chose it as the subject of his inaugural lecture at the Royal Institution on 22 February 1833, on his appointment as Fullerian professor of chemistry. Dr. Birkbeck gave a lecture upon it at the Society of Arts on 9 December 1834, and in 1835 the Admiralty published the report of a committee appointed by the board to inquire into the value of the new method.

In 1836, Kyan sold his rights to the Anti-Dry Rot Co, an Act of Parliament being passed which authorised the raising of a capital of £250,000. Tanks were constructed at Grosvenor Basin, Pimlico, at the Grand Surrey Canal Dock, Rotherhide, and at the City Road Basin. Great things were predicted of 'kyanising,' as the process then began to be called.

Among the early applications of the process was the kyanising of the palings round the Inner Circle, Regent's Park, which was carried out in 1835 as an advertisement, small brass plates being attached to the palings at intervals stating that the wood had been submitted to the new process. The plates soon disappeared, but the original palings still remain in good condition.

The timber used in building the Oxford and Cambridge Club, British Museum, Royal College of Surgeons, Westminster Bridewell, the new roof of the Temple Church, and the Ramsgate harbour works was also prepared by Kyan's process. When wooden railway sleepers became general (in place of the stone blocks used on the early lines), a very profitable business for Kyan's company was anticipated, and for a time these hopes were realised.

It became evident that iron fastenings could not be used in wood treated with corrosive sublimate, on account of the corrosive action, and it was said that the wood became brittle. The salt was somewhat expensive and Sir William Burnett's method of preserving timber by chloride of zinc, and afterwards the application of creosote for that purpose, proved severe competitors. Doubts began to be expressed as to the real efficiency of kyanising (see Proceedings of the Institution of Civil Engineers, 11 January 1853, pp. 206–243), and the process gradually ceased to be employed.

Besides the invention with which his name is associated, Kyan took out patents in 1833 (No. 6534) for propelling ships by a jet of water ejected at the stem, and in 1837 (No. 7460) for a method of obtaining ammoniacal salts from gas liquor. He was also the author of 'The Elements of Light and their Identity with those of Matter radiant or fixed,' 1838.

1850 January 5th. He died at New York, where he was engaged on a plan for filtering the water supplied to that city by the Croton aqueduct.