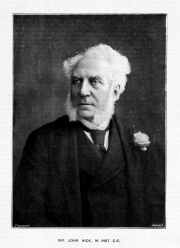 JOHN HICK was born at Bolton on 2nd July 1815. He was the eldest son of the late Mr. Benjamin Hick, one of the founders in 1833 of the engineering and millwright business constituting the Soho Iron Works.

After being educated at the Bolton Grammar School he entered these works, where he soon took an active part in the management, for many years in partnership with his father, and on the death of the latter in 1842 with the late Mr. William Hargreaves.

In 1868 he was elected Member of Parliament for Bolton, and immediately after his election he relinquished his connection with the Soho Works in consequence of government contracts being then in the hands of the firm. The frequency of explosions of steam boilers induced him to bring the subject before parliament; and in May 1870 upon his proposal a select committee was appointed, of which he was chairman, to enquire into the cause of these disasters and the best means of their prevention. In their report certain recommendations were made with the view to securing greater safety for steam boilers; and one of the suggestions was in favour of periodical but not compulsory inspection.

In August 1871, shortly after the presentation of the report, he introduced a bill to provide a more efficient remedy to persons injured and property damaged by the explosion of steam boilers through negligence.

He also served on a select committee in 1874 to consider the best chain cables and anchors for the navy; and amongst other matters to which he drew the attention of parliament were the importance of the British army being provided with the most effective rifle, and the improvement of heavy ordnance.

He retired from parliament in 1880. In his native town he held many public positions, and was also a justice of the peace and a deputy lieutenant of the county of Lancaster. He had been in failing health for some months previous to his death, which took place at his residence, Mytton Hall, near Whalley, Lancashire, on 2nd February 1894, at the age of seventy-eight.

He was an original member of this Institution from its formation in 1847 till 1852; and having rejoined in 1871, he was elected a Member of Council in 1872, and a Vice-President from 1874 to 1876. He was also a member of the Institution of Civil Engineers.

In 1849 he contributed a paper to this Institution on a frictional starting and disengaging apparatus for connecting and disconnecting the driving power with shafts and machinery.

JOHN HICK, born on the 2nd of July, 1815, was the eldest son of the late Mr. Benjamin Hick, one of the founders of the well known Soho Ironworks at Bolton.

At an early age the subject of this notice was sent to the Bolton Grammar School, where he received a sound commercial and classical education.

He then entered the Soho Works and, after making himself familiar with the various operations carried on, was taken into partnership, when he assumed an active share in the management of the firm.

Some time after the death of Mr. Benjamin Hick, which took place in September, 1842, the late William Hargreaves joined the firm, from that time known under the style of Messrs. Hick, Hargreaves and Company. Mr. Hick continued to take part in the management of the works until 1868, when his parliamentary duties necessitated his relinquishing active connection with the firm.

Mr. Hick was elected member for Bolton in the Conservative interest in November, 1868, and for nearly twelve years represented that borough in the House of Commons. He rendered important service to the community during his parliamentary career in bringing before the House the question of the loss of life and destruction of property resulting from the frequency of explosions in steam-boilers. This was a matter with which his long experience as a Lancashire engineer made him well qualified to deal.

In May, 1870, a Select Committee was appointed to inquire into the cause of these disasters and the best means for their prevention. Mr. Hick acted as chairman, the investigations of the Committee being of a very complete and exhaustive nature. In its report certain recommendations were made with a view to securing greater safety, one of the suggestions being in favour of periodical but not compulsory inspection.

In August, 1871 - shortly after the presentation of the Report Mr. Hick introduced a Bill 'to provide a more efficient remedy to persons injured and property damaged by the explosion of steam-boilers through negligence.'

He also served on a Select Committee, appointed in June, 1874, to inquire into the efficiency of the testing of chain cables and anchors. Mr. Hick warmly supported the general principles of the Education Act of 1870, as a measure calculated to promote popular education, but he also strongly adhered to the view that religious and secular instruction should go hand in hand.

For many years Mr. Hick was a magistrate both for the borough of Bolton and the Salford Hundred of the county of Lancashire.

On taking up his residence at Mytton Hall, near Whalley, he acted as a justice of the peace in that division of the county. From 1870 he served the office of a deputy lieutenant of the County Palatine.

As a director of the London and North Western Railway Company he took an active interest in the development of that system. He had a large share in the movement which resulted in the formation of the 27th Lancashire Rifle Volunteers, recruited from Bolton and its neighbourhood, and was a liberal supporter of the local charitable and educational institutions. He also rendered public service in connection with the prevention of the pollution of the River Ribble and its tributaries by refuse from cotton factories and other works near their banks. His artistic tastes induced him to fill his home at Mytton Hall with a large and valuable collection of paintings and sculpture, and the last two years of his life were devoted to the preparation of an elaborately illustrated catalogue' of these objects of art.

Mr. Hick died at Mytton Hall on the 2nd of February, 1894, after some months of failing health. He was elected a Member of the Institution on the 11th of March, 1845.

JOHN HICK died on February 2, 1894, at his residence near Blackburn, at the age of seventy-eight. Born at Bolton on July 2, 1815, he took when quite young an active part in the management of the Soho Ironworks.

On the death of his father in 1842, he was joined in the management of the works by the late William Hargreaves. Mr. Hick filled various public positions in his native town, and represented the borough in Parliament from 1868 until 1880.

During his twelve years of parliamentary life, he was frequently consulted by the Government upon subjects relating to armaments and to the construction of boilers for war-vessels. The frequency of explosions in steam-boilers induced him in 1871 to introduce a measure to provide a more efficient remedy to persons injured and property damaged by the explosions of steam-boilers through negligence.

In 1874 he served on a select committee to consider the best chain cables and anchors for the navy. On his labours in connection with the improvement of steam-engines for cotton mills it is unnecessary to dwell; the work of his firm is to be found in every country where fibre is spun or fabrics woven. Mr. Hick was a member of the Institution of Civil Engineers, and of the Institution of Mechanical Engineers.

He was elected a member of the Iron and Steel Institute in 1879.