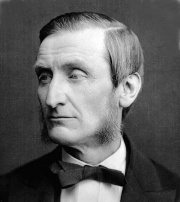 John Hall Gladstone FRS (1827-1902) was a British chemist. He served as President of the Physical Society between 1874 and 1876 and during 1877–1879 was President of the Chemical Society. Apart from chemistry, where one of his most notable publications was on bromination of rubber, he undertook pioneering work in optics and spectroscopy.

1827 March 7th. Born the son of John Gladstone, a wholesale draper in Hackney, London and Alison Hall, as the eldest of three sons.

The three brothers were educated entirely at home under tutors, and from very early days all showed a strong inclination toward natural science.

In 1842 the father retired from business, and the family spent a year in travelling on the continent. Part of this time was passed in Italy with their old friends: Charles Tilt, his wife and their daughter May, who in 1852 became the wife of John Hall Gladstone.

From early years Gladstone had shown strong religious tendencies, and when, at the age of seventeen, the question of his future career came to be discussed, he wished to enter the Christian ministry. From this course he was dissuaded both by his father and by Mr. Tilt, and in December 1844 he entered University College, London. Here he attended Graham's lectures on chemistry and worked in his private laboratory, and here he prepared his earliest scientific contribution on "Analysis of Sand from St. Michael's Bay, Normandy", which was read at a meeting of the Royal Chemical Society on 16 November 1846.

Next year, he received a gold medal from the college for his study on "Gun Cotton and Xyloidine". Later in the same year he went to University of Giessen to work under Justus von Liebig, returning in April 1848 with the degree of Doctor of Philosophy. The subject of his dissertation was possibly "Artificial Formation of Urea from Fulminic Acid".

Although Gladstone had thus formally adopted the pursuit of science as his career, he continued throughout his life to take an active part in religious work. In Clapham his parents were members of the Rev. James Hill's Congregational Church, and here he taught in the Sunday School, beside conducting services in a Mission Room at White Square. Later on he held a Bible Class for young men on Sunday afternoons, and until the end of his life he was intimately connected with the work of the Young Men's Christian Association founded by George Williams. For many years he was the chief organiser of the Sunday afternoon devotional meeting held annually at the meeting of the British Association.

In 1850 Gladstone was appointed Lecturer in Chemistry to St. Thomas's Hospital, a post which he held for two years, and in June 1853, at the unusually young age of 26, he was elected a Fellow of the Royal Society.

In 1864 he lost his wife, their eldest daughter and only son. This, however, seems to have been followed by only temporary suspense of activity, social and scientific.

In politics Gladstone was a Liberal, and on more than one occasion he was tempted to enter Parliament.

In 1868 he unsuccessfully contested the borough of York.

In 1869 he married Margaret Thompson King, daughter of the late Rev. Dr. David King, and niece of Lord Kelvin. This lady died in 1870, leaving one daughter.

During 1874–1877, Gladstone held the Fullerian Professorship of Chemistry at the Royal Institution, and was first President of the Physical Society, of which he was one of the founders.

He was President of the Chemical Society during 1877–79, and in 1898 he was one of the six past Presidents of that Society who had been Fellows for upwards of fifty years, and in whose honour a banquet was given under the chairmanship of the President, Professor James Dewar.

Gladstone was very fond of London and seems never to have wished to live out of the metropolis. He spoke French readily, and frequently attended the summer meetings of the Association Francaise pour l'Avancement des Sciences, and was also at one or two meetings of the Swiss Association. In recognition of his services to education he was elected an Honorary Fellow of the College of Preceptors.

He also received the degree Sc.D. at the celebration of the Tercentenary of Trinity College, Dublin, in 1892, and the Davy Medal from the Royal Society in 1897 "for his numerous contributions to chemical science, and especially for his important work in the application of optical methods to chemistry".

In 1880 he became a member of the Company of Wheelwrights, and as a liveryman took part in the last year of his life in the election of the Lord Mayor, at the Guildhall, on Michaelmas Day.

In his early years, Gladstone conducted studies of phosphamide and similar compounds, suggested by Liebig and revised ten years later; an inquiry into the composition of nitrogen iodide (1852). His more important work was published in the Philosophical Transactions in 1855, on "Circumstances modifying the Action of chemical Affinity". Here, the author examined the question, arising out of the researches of Bunsen and Debus, whether when two substances act on each other an increase in the quantity of one of them leads to a corresponding increase in the amount of chemical change observed, and whether such change occurs continuously or discretely, in atomic proportions.

Optical phenomena and the properties of elements and compounds in relation to light have always been a major interest for Gladstone. This comes out quite early in his career, and in a variety of forms. Thus in 1854 he lectured at the Royal Institution on "Chromatic Phenomena exhibited by Transmitted Light." In 1855 there were "Notes on some substances which exhibit the Phenomena of Fluorescence", and in 1856 on "Some Dichromatic Phenomena among Solutions". In 1858 he drew attention to the use of the prism in qualitative analysis[1], and discovered distinct lines in the absorption spectrum of didymium, a substance long afterwards resolved by Auer von Welsbach into the two elements known as praseodymium and neodymium. A little later he studied the absorption spectrum of the atmosphere, and found that the Fraunhofer lines varied according to the time of day, and that the change must be due to some constituents of the earth's atmosphere. In this research he was joined by Sir David Brewster, and together they produced a paper on the lines of the solar spectrum in 1860. The most important work of Gladstone in this direction was the long series of observations on the refraction and dispersion of liquids, which originated with a study of the "Influence of Temperature on the Refraction of Light,"[2]and followed by "Researches on the Refraction, Dispersion, and Sensitiveness of Liquids."[3].

Another memorable series of researches commenced about 1872, in conjunction with his assistant Alfred Tribe, resulted in the discovery of the zinc-copper couple, and its application to the production of the organozinc compounds and to other purposes. The couple has long since found its way into every laboratory in the world, and as a reducing agent has met with applications not only in connection with carbon compounds but for many purposes in analysis.

In 1874 and 1876 Gladstone was invited to deliver the Royal Institution Christmas Lecture on The Voltaic Battery and The Chemistry of Fire respectively.

1902 October 6th. Died. On the day of his death he presided in the afternoon at a meeting of the Christian Evidence Society, and, after walking part of the way home, was found lifeless in his study as the result of failure of the heart.

He was buried in Kensal Green Cemetery

JOHN HALL GLADSTONE was born on the 7th of March, 1827, and was educated at home.

He studied chemistry at University College, London, under Graham, and at Giessen under Liebig, taking his Ph.D. degree in 1848.

On returning to England, he lectured on chemistry at St. Thomas's Hospital from 1850 to 1852.

His subsequent scientific research work was done in his own private laboratory, with the exception of the three years 1874 to 1877, when he held the Fullerian Professorship of Chemistry at the Royal Institution.

Quite early he was attracted by problems arising out of the composition and action of explosives, and investigated fulminic acid, iodide of nitrogen, guncotton, and xyloidine. In consequence of this work he was made a member of the Gun-cotton Committee appointed by the War Office, 1864-1868.

Even earlier - 1859-1862 - he had become a member of a Royal Commission on lighthouses, buoys, and beacons, writing the greater part of the Report and a good deal of the Appendix. His original work in physics and physical chemistry was very fruitful.

In 1897 he had written seventy-six papers himself, and forty-seven in conjunction with other workers. A paper on Chemical Affinity occupies forty-five pages of the. Philosophical Transactions of the Royal Society for 1855. A long series of papers (with Mr. Tribe) on the copper-zinc couple and its applications conferred a distinct boon on organic chemistry. The chemistry of secondary batteries was first made known.by Dr. Gladstone and Mr. Tribe, physical causes for their varying E.M.F. being subsequently investigated in conjunction with Mr. Hibbert.

In optics and chemical optics Dr. Gladstone's investigations led to a "law" which is constantly being used at the present time. It deals with the relations between the refractive index of a body and its density, and the general results will have to be considered in reference to corresponding changes in the dielectric constant. By prolonged researches he obtained consistent values for the refractive equivalents of the elements, and provided data of much value in certain optical problems. A glance at the index to Ostwald's Lehrbuch will show how much Dr. Gladstone had to do with laying the foundations of physical chemistry. He was awarded the Davy Medal by the Royal Society, 1897.

Dr. Gladstone held many offices. He was the first President of the Physical Society, 1874-1876, and President of the Chemical Society, 1877-1879. He was elected a Fellow of the Royal Society in 1853, and served on the Council for many years. A member of the British Association from 1849 onwards, he served on the committee of Section B. for fifty years, and was president of the Section in 1872 and in 1883. Dr. Gladstone had other and strong interests beside science. He served for twenty-one years on the London School Board. Here also he was a pioneer. When he began to advocate science teaching as a part of the ordinary day-school work, there were not so many sympathetic listeners as at the present day. In committee work he was most assiduous, and only those who were familiar with him could appreciate his daily contribution to the cause of reformed popular education. Besides this, there was much philanthropic work hidden from the public. An abiding support of broad and helpful religion was a most striking feature in his character.

He was elected a Member of the Society of Telegraph Engineers, now the Institution of Electrical Engineers, on the nth of December, 1872. In 1887 he was elected a Member of Council, and in 1892, in conjunction with Mr. W. Hibbert, contributed a paper "On the Cause of the Changes of Electromotive Force in Secondary Batteries," read before the Institution on the 12th of May, 1892, and printed in the Journal, 1892, Vol. 21, p. 412.