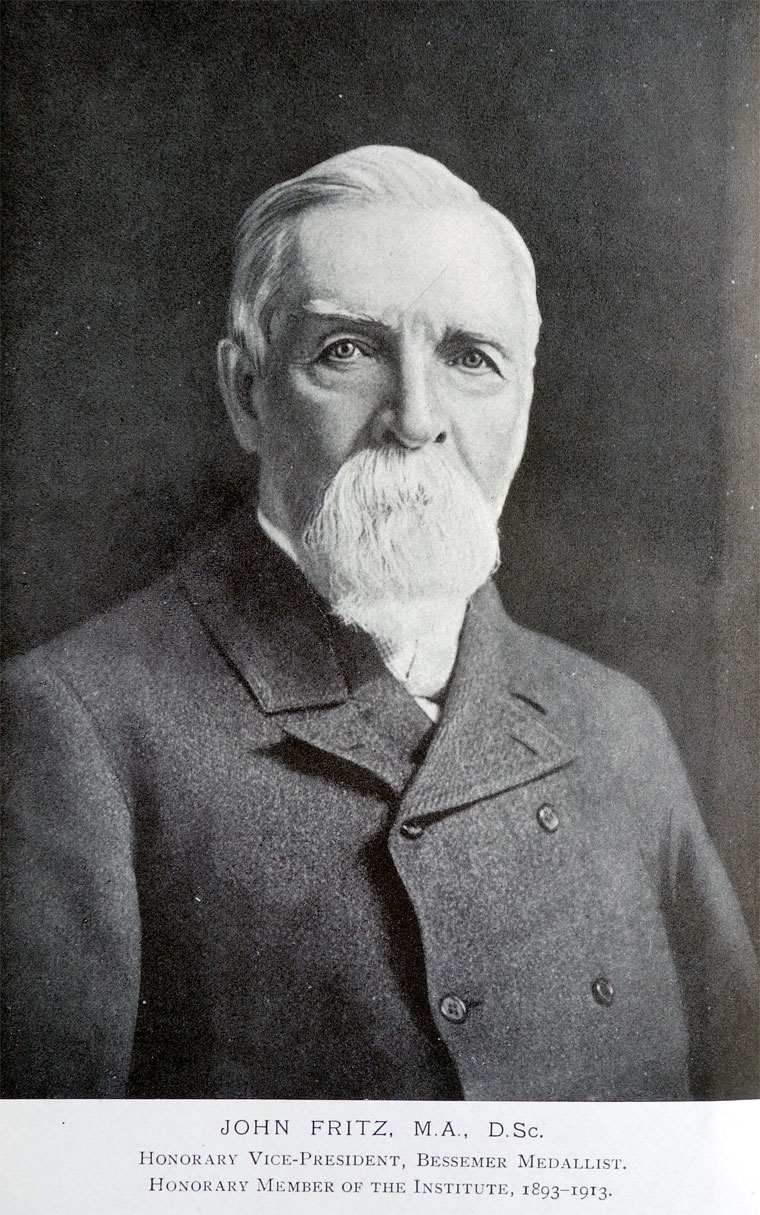 JOHN FRITZ, Honorary Vice-President of the Iron and Steel Institute, died on February 13, 1913. By his death the Institute has lost a warm supporter and valued friend. Throughout his long career he contributed greatly to the achievements of metallurgy, and was regarded as the father of the iron trade in the United States.

"Uncle" John Fritz, as he was familiarly and affectionately known by most of his fellow-countrymen, was born on August 21, 1822, in Londonderry township, Chester county, Pennsylvania, and was the eldest son of George Fritz. His father was born in Germany, and his mother, although born in America' was of Irish extraction. His early life was spent on his father's farm, and he received his early education at the Friends' School at West Town, Chester county. In 1838 he was apprenticed to the trade of blacksmithing at Parkesburg, Chester county, where he early displayed constructive skill and an aptitude for engineering. Being earnestly desirous of obtaining employment in ironworks, he applied to the management of several large works, and was eventually engaged as an assistant in the erection of machinery boilers and furnaces at the ironworks of Messrs. Moore & Hooven at Trenton, New Jersey. Here he discharged his duties so satisfactorily that he was soon placed in charge of all the machinery on the plant.

Contriving tools and expediencies when no teachers and no precedents were available, he worked by day at his trade, and spent the evening hours learning puddling as a volunteer. Such methods of energy and perseverance are always noticed, and have in all times brought recognition and promotion. John Fritz was made night superintendent of the Norristown Iron Works, and was later offered the superintendency of a new plant in the Susquehanna Valley.

Affected by malarial fevers contracted in this unwholesome locality, he left to start engineering works on a small scale on his own account.

With him he associated four men, all of whom afterwards made for themselves names as great engineers. The enterprise not proving as profitable as he wished, he accepted in 1854 a position as technical head of the Cambria Iron Company, in Johnstown, Pa. The years he spent in this place were full of remarkable achievement. He took charge of a poorly built and antiquated plant, and was expected to make a success. There was no money available, and the monthly wage bill had often to be paid in paper scrip" or promissory notes. A fire devastated the rolling-mill department; everything required for re-starting had to be made at home. John Fritz, with his indomitable will and remarkable resource, overcame all difficulties. He invented and installed the first three-high rolling-mill, and left the Company strongly established on the high road to the success later achieved.

In 1860 he transferred his activities to the Bethlehem Iron Company, with which newly-formed concern he remained during his entire active life. He saw this enterprise grow from a couple of puddling furnaces and a small rolling-mill to become one of the large plants of the world.

He constructed blast-furnaces for the use of anthracite coal, and equipped them in a manner far in advance of his time. He introduced the Bessemer process, inventing auxiliary machinery for the same, and brought it to such perfection that his output was about double that of the best similar plants in Europe. At a time when in the United States all efforts were directed towards increasing output, John Fritz always stood up for quality, and his Bessemer billets often sold at a premium of some four dollars per ton above the price obtained by other manufacturers.

In 1864, during the Civil War, the United States Government called upon John Fritz to design a rolling-mill plant for Chattanooga, in the far South. It was then intended there to roll the rails for relaying the destroyed railway lines in the seceded territory. Later, in 1885, when the defensive power of the United States was at its lowest, it was John Fritz who conceived the necessity for the construction of a gun and armour-plate plant. He proposed that his Company should commit themselves to this gigantic venture. He carried his ideas almost against the wishes of his Board, went to Europe, made arrangements with French and British works for the use of their experience and machinery, returned, and built the magnificent installation which produced all the armour and all the heavy guns which for many years were used in the United States navy and army. When the Spanish war broke out in 1898 it was the guns and armour built by John Fritz that won for the United States the battle of Santiago.

In 1897, having retired from active business, he was instructed by the United States Government to design thoroughly up-to-date works for the manufacture of armour-plate and heavy artillery. He, then seventy-six years old, performed :this onerous work in record time and in a splendid manner. The Government having succeeded in making arrangements with the Carnegie and Bethlehem Companies, the plant was, however, never built. This was John Fritz's last official engineering work, but his work amongst engineers continued in a wider sphere than ever, and he became to the younger generations, growing up and passing away around him, a representative of the past, of the men who built up from nothing the great American engineering industry.

John Fritz had been President of the American Institute of Mining Engineers and of the American Society of Mechanical Engineers. He was also an Honorary Member of the Verein deutscher Eisenhiittenleute. In 1902 the John Fritz gold medal was instituted by the American Engineering Societies for yearly presentation for distinguished achievements in engineering, and Fritz became the first recipient of this distinction.

In 1893 he was awarded the Bessemer gold medal, and was also made an Honorary Member of the Iron and Steel Institute.