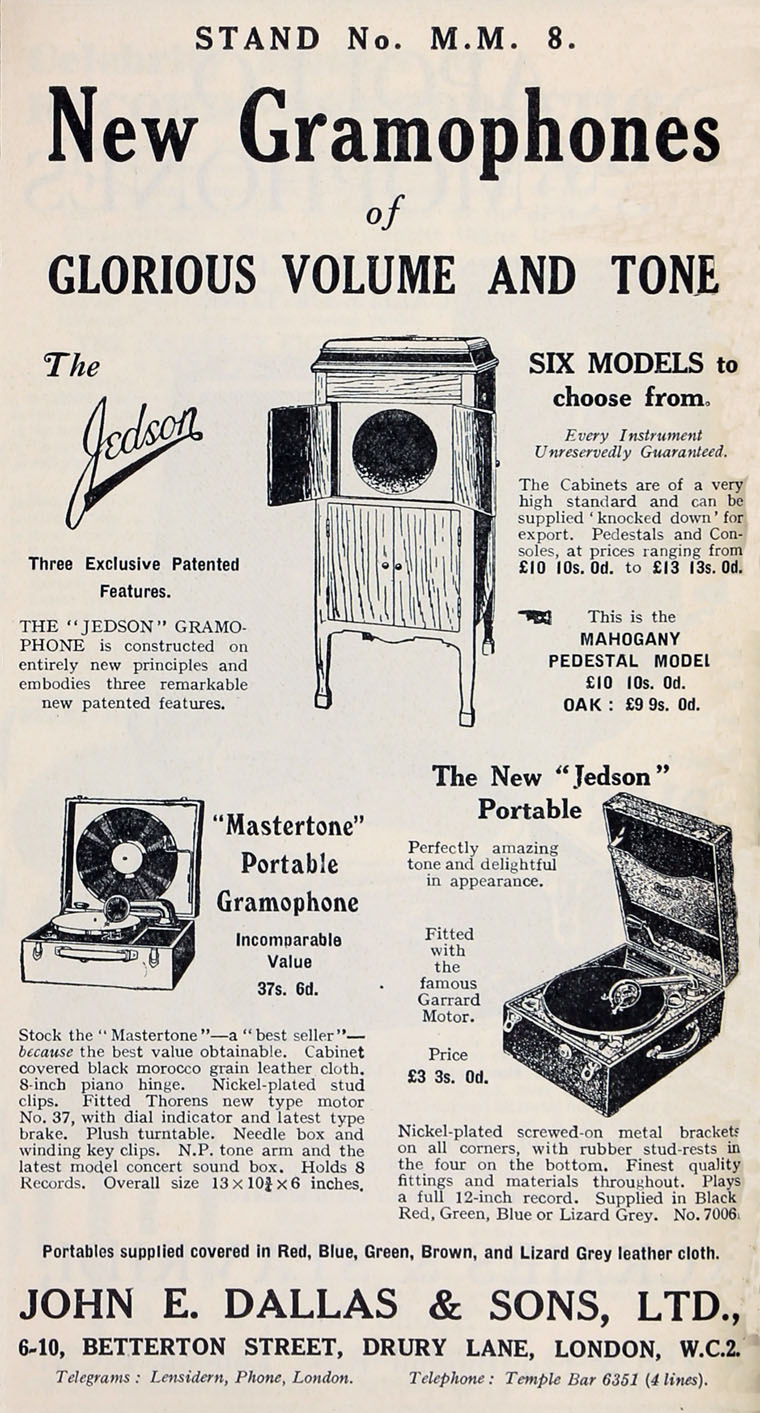 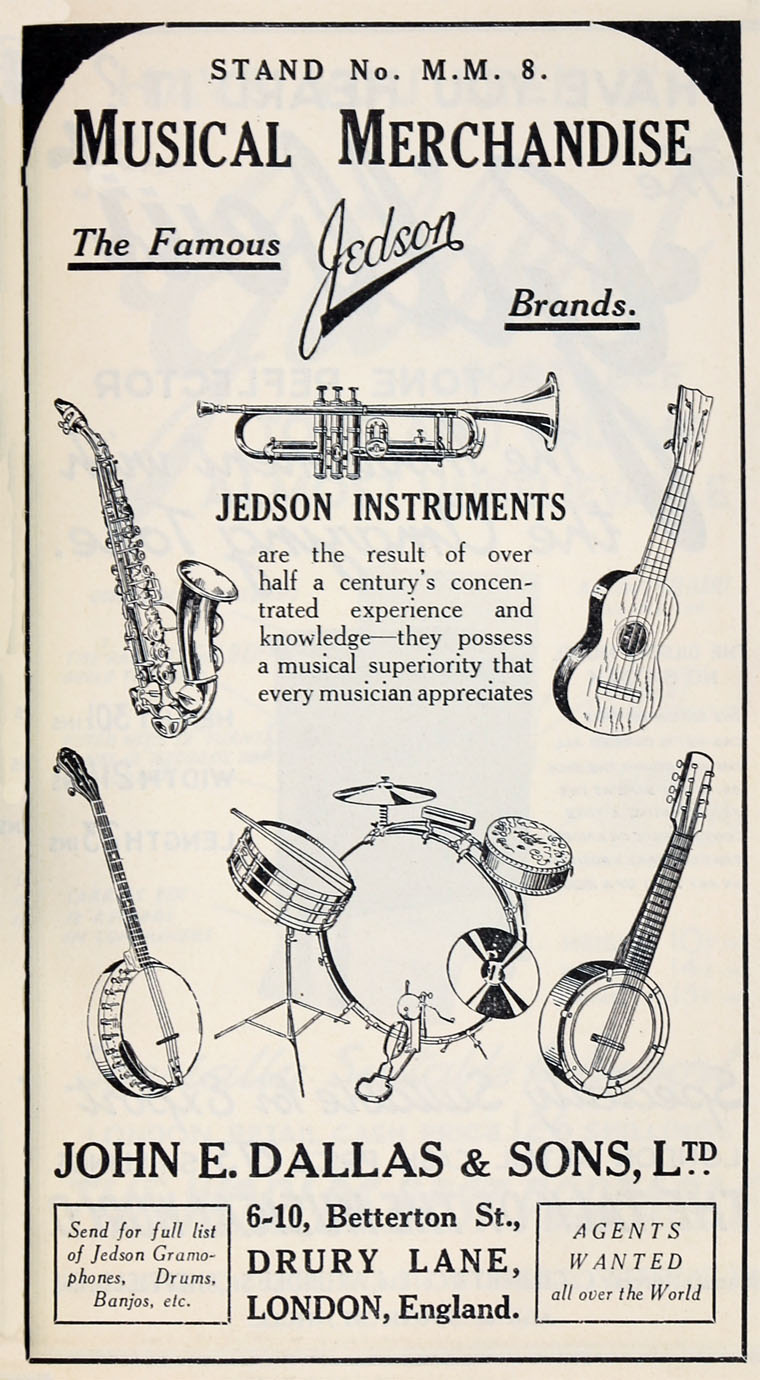 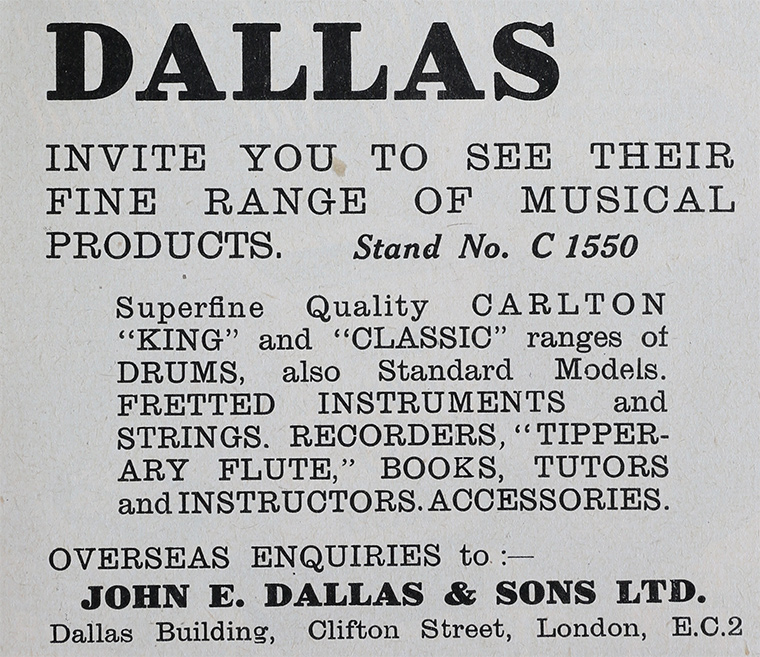 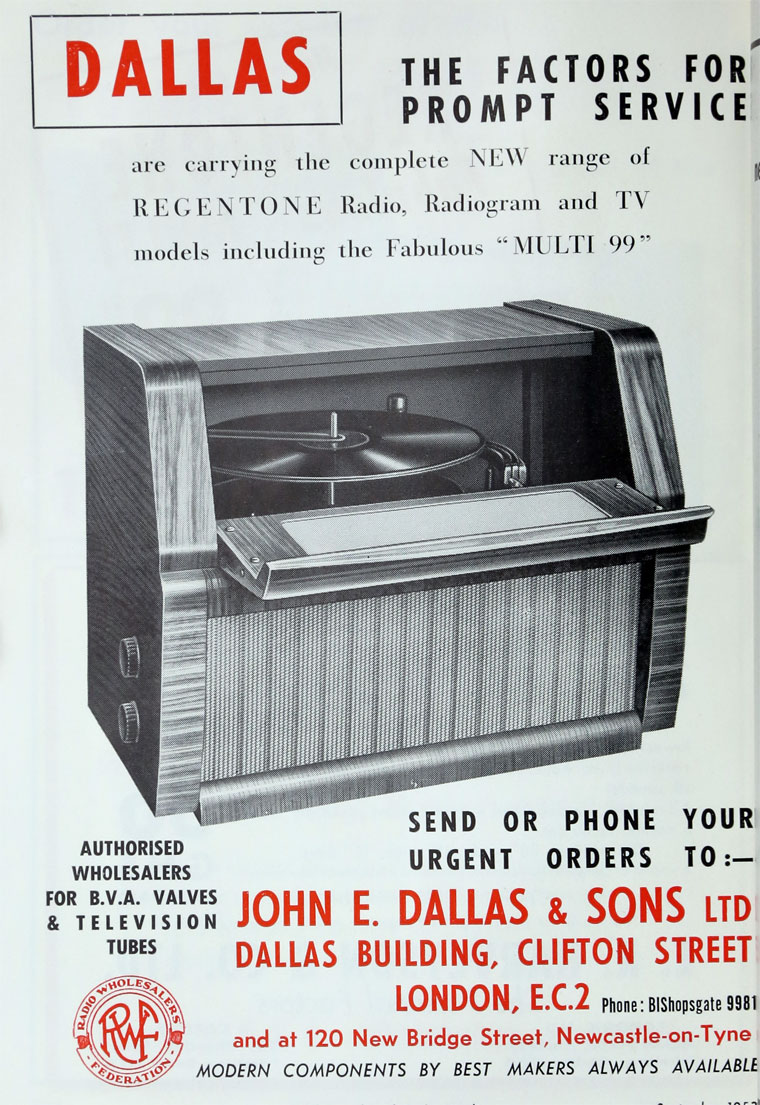 1875 He set up as a publisher and banjo maker at 415 Strand, from which address it is said he made banjos for the Moore and Burgess Minstrels and the Mohawk Minstrels. Dallas was a fine wood craftsman who fashioned some exceptionally high-class banjos and zither-banjos.

1893 By then, the demand for his instruments made it necessary for him to take over the entire premises at 415 Strand; enlarge his workshops; and employ men to make the large range of instruments he had put on the market. For some years he advertised that he personally tested every banjo and zither-banjo before it left his workshops. At the height of the banjo boom he was making banjos and zither-banjos for other firms and teachers.

1905/6 The three sons of John E. Dallas were rewarded for their work with the firm and were given directorships and the firm's title changed to John E. Dallas and Sons.

By the late 1920s, instruments were being mass produced under the name "Jedson." Which was derived from his initials, "J.E.D", and "Sons".

1921 August . The firm became a private limited company. Soon the activities of the company had spread far beyond the fretted instruments and with it came growth.

1926 The firm moved to larger premises, at 6-10 Betterton Street, Covent Garden, London, WC2, and started to lay the foundation for the large wholesale distribution of everything musical for which the firm is known today.

1937 The house of Dallas moved to Ridgmount Street.

1947 In June, John E. Dallas and Sons Ltd became a public company with an issued share capital of £500,000. With the outbreak of World War II (1939-1945), Dallas ceased to make banjos but, in 1947, started to produce inexpensive banjos in small quantities - sold by music shops throughout the country. These bear the "Jedson" trade mark but do not comparable with the pre-war instruments bearing the same name.

1963 The Houghton works in Birmingham were closed down, and George Houghton set up workshops for the Dallas company at Bexleyheath, Kent. It was from there that most of the post-war banjos bearing the Dallas name were made. A whole range of Dallas Banjo Ukuleles were made bearing the name and autograph of George Formby.

1966 Astaron-Bird linked with John E. Dallas and Sons to expand the sales of electronic organs that Bird made[3]