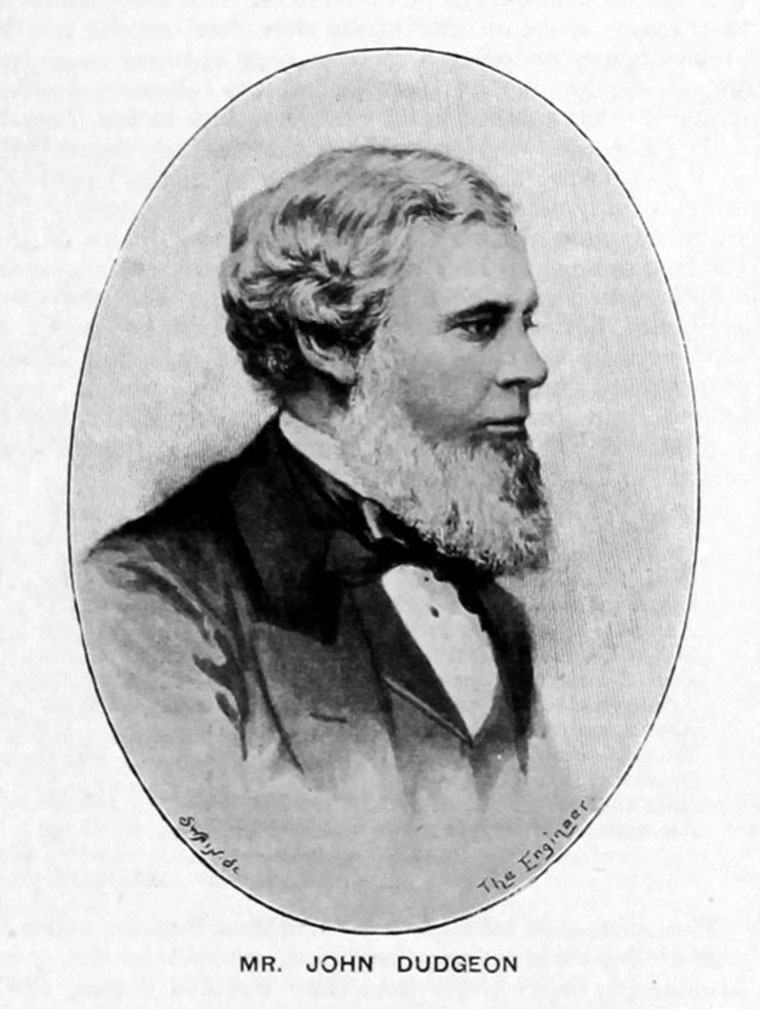 "... first saw the light in the village or Tynninghame in East Lothian on the 1st of May, 1816. He was the son of Alexander Dudgeon, who was mill-wright-smith to the Earl or Haddington at the same place. Obtaining his education at the village school of his native place, he was at the age of thirteen years apprenticed to his father's business as a millwright. Being out of his apprenticeship when he was eighteen years old, he went to Glasgow, where he obtained employment in several workshops, notably in that of Messrs. Girdwood and Co., engineers. In 1836 he entered the employment of Messrs. Nasmyth at Patricroft, where he became foreman, and from thence went to Egypt, entering the service o£ Mahommed Ali, the Viceroy, where he remained three years, superintending the erection of large cotton mills and their machinery.

Returning from Egypt to London, he entered the employ of Messrs. Seaward and Co., marine engineers, etc., as their outdoor foreman. While with them he put up the first Portland cement-making machinery at what is now Messrs. Robins and Co.'s manufactory at Northfleet, Kent, and subsequently superintended the fitting of many steam vessels engined by his employers. About 1850 he was appointed - for a term - Board of Trade Marine Surveyor to the Port of London, and at the termination of his engagement be started as a consulting engineer and marine surveyor on his own account in London.

It was while thus occupied that he developed the capacity for marine engine and ship design and construction, so that in 1855 we find him - in conjunction with his younger brother William - established at the Sun Ironworks, Millwall, as marine engineers. In 1862 he took up shipbuilding, starting for that purpose a shipyard at Cubitt Town.

As we have elsewhere recorded in our pages, Mr. Dudgeon was the pioneer of ship propulsion with independently driven twin screws; his first vessel so fitted being the Flora, a noted blockade-runner during the American War of Secession. Early in his career he was an advocate of progress in the development of the marine engine, notably in the direction of the increased efficiency to be gained by the adoption of higher tension steam, superheating it, and then expanding it to a greater degree than before. This principle he practically applied in several of his later twin-screw engines. When in full work, his firm's engine factory and shipyard, which were closed in 1875, gave employment to about 2500 men.

Mr. Dudgeon was a member of the Council of the Institution of Naval Architects, and contributed much valuable information on engineering matters to several of our scientific publications. He died in 1882, and was interred in the churchyard of Town Malling, Kent[1]