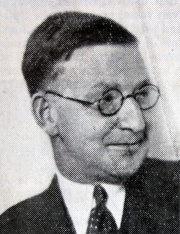 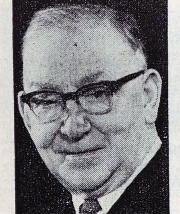 Sir John Douglas Cockcroft OM KCB CBE FRS (1897-1967) was a British physicist. He shared the Nobel Prize in Physics for splitting the atomic nucleus with Ernest Walton, and was instrumental in the development of nuclear power. He was the first Master of Churchill College

1897 May 27th. Cockcroft was born in Todmorden, Yorkshire, the eldest son of a mill owner.

1909-14 Educated at Todmorden Secondary School and studied mathematics at the Victoria University of Manchester (1914–1915).

1915-18 Signaller in the Royal Artillery

He undertook an apprenticeship with Metropolitan Vickers Electrical Company whilst in receipt of an '1851 Exhibition Scholarship' (established by the Royal Commission for the Great Exhibition of 1851).

1928 Began to work with Ernest Walton on the acceleration of protons.

1932 Bombarded lithium with high energy neutrons, electrons and protons and succeeded in transmuting it into helium and other chemical elements. This was one of the earliest experiments to change the atomic nucleus of one element to a different nucleus by artificial means. This feat was popularly – if somewhat inaccurately – known as splitting the atom.

At the outbreak of the Second World War, he took up the post of Assistant Director of Scientific Research in the Ministry of Supply, working on radar.

In 1944, he took charge of the Canadian Atomic Energy project and became Director of the Montreal Laboratory and Chalk River Laboratories, replacing Hans von Halban, who was considered a security risk.

1944 Made a Commander of the Order of the British Empire

1946 Returned to Britain to set up the Atomic Energy Research Establishment (AERE) at Harwell, charged with developing Britain's atomic power programme. He became the first director of AERE. Even when leaving the post, he continued to be involved with Harwell.

1953 Created Knight Commander of the Order of the Bath

In post-war years, AERE under his direction took part in frontier fusion research, including the ZETA programme.

As director of the AERE, he famously insisted that the coolant discharge chimney stacks of the Windscale plutonium production reactors be fitted, at great expense, with high performance filters. Since this was decided after the stacks had been designed, they produced iconic lumps in the shape of the structures. The reactors were designed to remain clean and uncorroded during use, thus it was not considered that there would be any particulate present for the filters to catch. These filters were therefore known as Cockcroft's Folly until the core of one of the two reactors famously caught fire in the Windscale fire of 1957, and the filters prevented the disaster from becoming a catastrophe.

In 1951, Cockcroft, along with Walton, was awarded the Nobel Prize in Physics for his work in the use of accelerated particles to study the atomic nucleus.

In 1959, he became the first Master of Churchill College, Cambridge. He was president of the Institute of Physics, the Physics Society, and the British Association for the Advancement of Science. Cockcroft served as chancellor of the Australian National University from 1961 to 1965.

He received the American Atoms for Peace Award in 1961. He delivered the Rutherford Memorial Lecture in 1944.

1967 September 18th. Died and was buried at the Parish of the Ascension Burial Ground in Cambridge, together with his wife Elizabeth and son John, known as Timothy, who had died at the age of two in 1929.

In the 1950s, the AERE commissioned a number of homes to be built in the nearby town of Didcot for the many Harwell workers who lived there. The "focal" road of this development in the south of the town (the one with the shops, school and public house) is named Cockcroft Road.

Professor J. D. COCKCROFT, C.B.E., M.A., F.R.S., Director of the Atomic Energy Research Establishment, at Harwell, near Didcot, Berks, received his technical education at the Universities of Manchester and Cambridge, taking degrees in physics and engineering. He also took a College Apprenticeship course with Metropolitan-Vickers Electrical Company, Ltd. This course gave scope to his active interest in engineering, which has continued during his eminent work in physics. He formerly occupied the Jacksonian Chair of Physics in the University of Cambridge, where he was also a Fellow of St. John's College.

During the war of 1939-45 Professor Cockcroft was Chief Superintendent of the Air Defence Research and Development Establishment of the Ministry of Supply.

The son of a Yorkshire cotton manufacturer, Sir John won a scholarship to the Manchester College of Technology prior to the outbreak of the 1914-18 war. In 1919, as a student apprentice at 'MetroVicks' he laid the theoretical and practical foundations of a career in physics and engineering which was destined to lead him to the forefront of research in these fields.

Three years later he moved to the Cavendish Laboratory, Cambridge, to work with a number of young physicists under the direction of Lord Rutherford.

The age of atomic energy was born in 1928 when, with Dr E. T. S. Walton, Sir John `split the atom'. Thus at the age of 35 Cockcroft had achieved world-wide fame, but not content with that, he went on to apply this great discovery for his country's profit in war and peace. His work at Cambridge and in Canada during the 1939-45 war earned him first the FRS in 1936 and the Nobel Prize, which he shared with Walton, in 1951.

His extraordinary capacity for work was well demonstrated during the 1939-45 war with his participation in the development of Radar.

Later, Cockcroft's name became synonymous with the peaceful uses of atomic energy at Harwell, where he reigned over its development for twelve years, transforming the AEA into a Mecca for scientists. As Director of Harwell he laid the foundations for the next generation of atomic reactors at Dounreay, in Scotland.

In 1959, he became the first Master of Churchill College, Cambridge, two years later he was made Chancellor of the Australian National University, and in 1961 he was elected President of Manchester College of Science and Technology. He was made an Honorary Member of the Institution in 1951.

Sir John's death robs the world of one of its greatest scientists and he will be mourned by friends and colleagues all over the world.