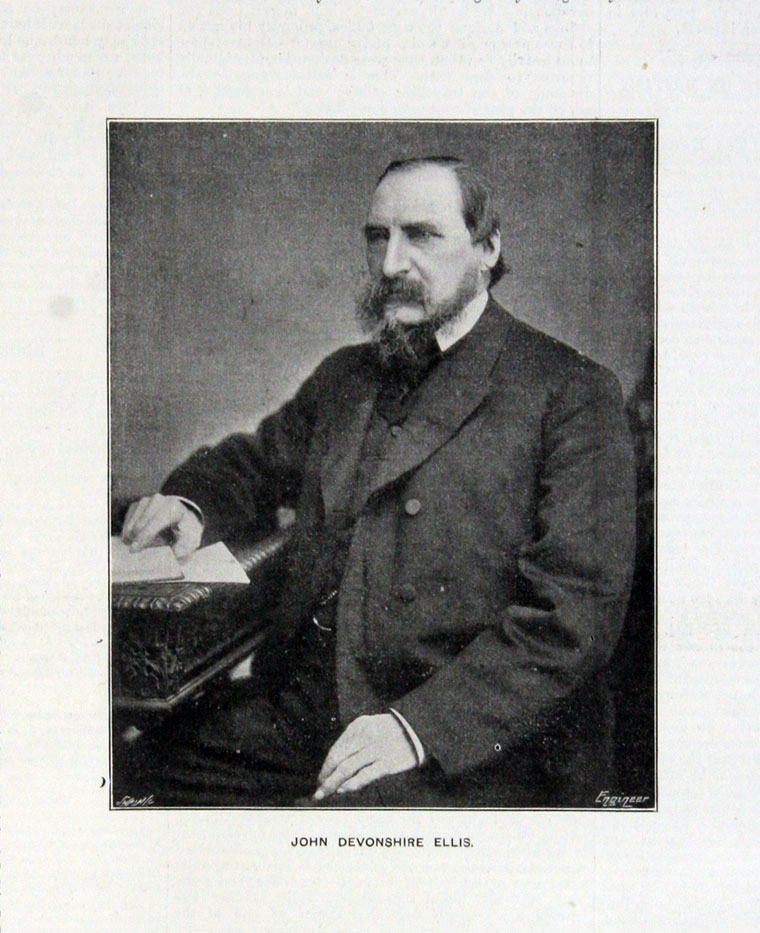 1824 Born the son of Charles Ellis

JOHN DEVONSHIRE ELLIS, Vice-President of the Iron and Steel Institute, died at his residence, Sparken, Worksop, on Sunday morning, November 11, 1906, at the age of eighty-two years. Mr. Ellis was one of the makers of modern Sheffield, and for over fifty years he was a leader in every development of the heavy steel trades.

He was the son of a Birmingham brass manufacturer, and was educated at King Edward VI.'s School in that town, under the headmastership of Dr. Jeune. At twenty-four years of age he was admitted to partnership with his father and brother, and spent seven years in the superintendence of the engineering and manufacturing departments of the firm. In 1854 he left Birmingham for Sheffield to devote himself to the steel trade on his own account. He joined Mr. (afterwards Sir John) Brown in the purchase of a small steelworks.

Mr. Brown had already been engaged for some years in business in the town as a manufacturer of railway springs and buffers; and there was shortly afterwards admitted a third partner, the late Mr. William Bragg. The enterprise began in a small works covering less than three acres, with a joint capital of about £15,000, 250 employees, and an annual output of about 5000 tons, value £30,000. The railway developments of the fifties gave the new firm its first great lift, for Mr. D. Ellis was the one man among the three partners who realised the importance of the invention of the firm's neighbour, Mr. Henry Bessemer, and persuaded his associates, against their own judgment, to enter on the manufacture of steel rails by the Bessemer process, under licence from the inventor. The firm did well out of steel rails for many years, until economic conditions took the industry away to the coast. A still more important chapter in Mr. Ellis's history is his part in the development of the manufacture of armour-plates, and it was at his works that the first armour-plate was rolled. In 1859 his firm started rolling and welding iron plates till the required thickness for ships' protection was attained. Later, when armour of this description was superseded, Mr. Ellis brought out the "Ellis" compound armour, consisting of plates of wrought iron with a hard steel face half the thickness of the iron, the steel and iron being made separately and welded together by a process of his own invention. The next notable step in the improvement of armour was effected by the introduction of the principle of cementation, a combination of the cementation and chilling processes being the main feature of the Ellis-Tresidder armour, which marked a great advance in shot-resisting power. The well-known Ellis-Eaves system of induced draught was also the result of his experiments; and he made numerous improvements in workshop plant.

The firm of John Brown & Co., of which he was chairman at the time of his death, became a limited company in 1864, with a capital of £1,000,000 sterling; the total capital is now close on £3,000,000. The firm employs about 16,000 men, with a yearly wage bill of a million and a quarter sterling. Sir John Brown retired in 1870, and from that date down to his death Mr. Ellis remained the head of the firm, and his regular daily attendance, scarcely ever interrupted for a holiday, continued down to after his eightieth year.

In 1867 the King of Sweden conferred upon Mr. Ellis the Cross of the Order of Wasa. He was a member of the Institution of Civil Engineers and of the Cutlers' Company. He was elected a member of the Iron and Steel Institute in 1875, and was awarded the Bessemer Gold Medal in 1889 for his services to metallurgy.

In 1888 he was elected a member of Council, and in 1901 a Vice-President of the Institute. During the visit of the Institute to Sheffield in 1905 he acted as a member of the Local Reception Committee, and received the members on the occasion of their visit to the Atlas Works, despite the fact that his health was then failing. He subsequently spoke at the luncheon given at the Norfolk Works.

JOHN DEVONSHIRE ELLIS died at his residence, Sparken, Worksop, on the 11th November, 1906, in his eighty-third year.

Born on the 20th April, 1824, he was the son of Charles Ellis, a Birmingham engineer, and as a young man he entered his father’s works in that city, where he gained a thorough practical knowledge of the manufacture and working of brass and other metals.

In 1848 he and his brother were taken into partnership, the firm becoming Charles Ellis and Sons.

The co-partnership formed in 1854 between Mr. (afterwards Sir) John Brown, John Devonshire Ellis, and William Bragge had far-reaching results. At the outset of its career, the business was of modest dimensions, the Atlas Works purchased by the partners being only 3 acres in extent, while the output of iron in the early years was seldom over 5,000 tons.

Soon after the organization of the company, however, the question of providing armour for British ships came to the fore, owing to its application in 1858 to the French warship 'La Gloire.' Messrs. Brown and Ellis at once set themselves to evolve a more economical and expeditious system of manufacturing armour-plates than that adopted by the French, which was successfully accomplished by processes of welding and rolling, and the first armour-plates produced by this method were fitted to the 'Black Prince' and 'Warrior.' The thickness of the plates, at just 4 inches, was continually increased to meet improvements in guns and projectiles.

As the partner responsible for the practical management of the engineering and manufacturing departments of the works as well as of the firm’s collieries, Mr. Ellis had to devise improved appliances for the thicker armour, and this for several years gave full scope to his energies.

Like others engaged in metallurgy, Mr. Ellis found the contest between armour and artillery very fascinating. Steel armour had been tried, because of its greater resisting power than wrought iron, but it was found that the steel plate lacked toughness, and fell to pieces under the impact of the shot. Mr. Ellis then concentrated his attention upon the welding of a hard steel plate upon a wrought-iron backing, so that, while the face of the steel resisted perforation, the backing gave the required tenacity to hold the plate intact. After many experiments he succeeded in uniting the two plates by a patented process, designed to ensure a perfect weld. He then took up the problem of the cementation of the armour, at which he worked from 1871, when he took out his first patent, and had his first plate tried, until success was finally reached in the satisfactory trials of the first chilled compound plate of the Ellis-Tresidder type at Shoeburyness in 1891.

The enterprise which he displayed in connection with the early application and advocacy of the Bessemer process was characteristic. Bessemer’s works closely adjoined the Atlas establishment, and Mr. Ellis being thus afforded an early opportunity of becoming acquainted with the new process, his investigation resulted in the instalment at the Atlas works of the first working apparatus on the new system to be put in operation in this country outside Bessemer’s works. For his early recognition of the process and for his work in connection with armour-plates, Mr. Ellis was awarded the Bessemer gold medal of the Iron and Steel Institute in 1889.

Mr. Ellis conducted much research work at the Atlas Works, and his name is associated with a form of induced draught with which successful results have been achieved, and by which the smoke nuisance has been somewhat abated. He found an outlet for his mechanical ability also in the improvement of the workshop plant of the works, and he devised a mill for rolling the ribbed boiler flues of the Purves and 'camber' types, and also in connection with the manufacture of Serve tubes.

After the retirement of Sir John Brown in 1870, and the death of Mr. Bragge, the other original partner, in 1884, Mr. Ellis was left in sole charge of affairs. The partnership was formed into a limited liability company in 1864, and Mr. Ellis became managing director, a position which he held for about 35 years. During that period many developments took place and considerable additions were made to the establishment.

In 1899 the famous Clydebank Shipbuilding and Engineering Works were acquired. The Atlas Works at the date of Mr. Ellis’s death covered an area twelve times greater than when they were first started; and the output of steel for various purposes increased to about 100,000 tons per annum.

Some years before his death, Mr. Ellis was presented by the King of Sweden and Norway with the Order of the Wasa. He was of a retiring disposition, and took little part in the public life of Sheffield, although he sat as a magistrate for the West Riding of the County of York, and was a Member of the Cutlers’ Company for many years. He was one of the original members and a Vice- President of the Iron and Steel Institute. He was always a good companion and an excellent raconteur, especially in connection with the early difficulties of the metallurgical industry.

Mr. Ellis was elected a Member of The Institution on the 8th January, 1884.