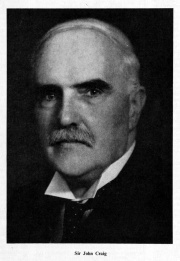 1910 Became a Director at Colvilles.

SIR JOHN CRAIG spent the whole of his working life in the British iron and steel industry; his death, which occurred at Cambusnethan Priory, Wishaw, on February 1, less than a year after retiring from the eminent position he occupied for so long, is deeply regretted. He was in his eighty-third year, and his period of service with Colvilles, Ltd., and its predecessor extended over no less than sixty-seven years.

John Craig was born at Clydesdale, New Stevenston, on December 11, 1874. His father and his grandfather were employed in iron works, and at a very early age he began to gather some experience of the industry in which subsequently he became an acknowledged authority. A survey of his life's work, which was prepared last year by Mr. David Murray, records that John Craig, like other boys of his time, was in the habit of going into the works with meals for his father. In addition; there was an occasion when he earned a halfpenny for each of nine visits in a week carrying food to a hammer driver!

John Craig left school just before his fourteenth birthday to become an office-boy at the Dalzell works of David Colville and Sons, as the firm was then entitled. It was a modest establishment consisting originally of twenty puddling furnaces and two mills, with four 12-ton open-hearth furnaces producing only about 500 tons of ingots a week. The whole plant in those days, it is said, occupied less than 14 acres, of which only 1 acre was roofed.

But from David Colville and his three sons, the young John Craig gained excellent training in all departments of the plant as it then was; there he was inspired by those principles which undoubtedly influenced the many developments which he initiated and brought to fruition in the succeeding years.

One of John Craig's jobs in his early years with Colville's was to keep the "Yankee slab book." The firm was busy shipping steel slabs for the first plates ever rolled in the U.S.A. At about the same time, John Craig was also concerned with the dispatch of the first steel plates built into an ocean-going liner in Germany.

In 1895, one of the Colville sons, John, entered Parliament, and on that account relinquished the regular representation of his firm at the Royal Exchange, in Glasgow. The task was one which was immediately entrusted to John Craig, who was then twenty-one. The daily journey to Glasgow by train, it is recorded, gave him the opportunity to continue the education which had been interrupted at the age of fourteen, and to expand it in directions which were not covered by his night-school curriculum.

At the turn of the century, John Colville, who had become chairman of his company, died suddenly. It was an event which imposed a greater burden of responsibility upon the management, and resulted in John Craig taking a bigger share of that responsibility. He acquitted himself well, and in 1910 he was invited to become a director. A big expansion of the Dalzell works was put in hand in 1912, and shortly afterwards, of course, there came the first world war. For the first time since its formation, David Colville and Sons, Ltd., began to extend its interests outside Dalzell, by taking up a controlling share in the Fullwood Foundry Company; it was a venture to which John Craig gave particular attention.

As the demands of the war intensified, the Government of the day asked Colvilles to become a focal point for the expansion of the iron and steel industry in Scotland. The Cambuslang works of the Clydebridge Steel Company were taken over by David Colville and Sons, Ltd., in 1915, and in the following year the Glengarnock plant was acquired, including the blast-furnaces and the Bessemer converters. For these developments, and others outside Dalzell, the main responsibility was ably shouldered by John Craig.

David Colville and his brother Archibald both died within a few months of each other in 1916, and, at the age of forty-two, John Craig succeeded to the chairmanship of the company he had entered as an office-boy.

The 1920s turned out to be a difficult period for the British steel industry, but John Craig was one of those men who were convinced that its prosperity would return. He gave practical expression to that conviction, for during the time of depression his firm expended a considerable sum of money in the building of the Clydebridge plate mill. Moreover, his interest was not confined solely to his own company. There were many services which be unsparingly gave to the industry as a whole. He took a major share, for example, in the founding of the Feb. 8, 1957 National Federation of Iron and Steel Manufacturers, and was one of its early presidents.

In the early 1930s, John Craig successfully steered his company to further achievements. The iron and steel industry passed through a period of reorganisation, and David Colville and Sons, Ltd., merged with other companies to form Colvilles, Ltd., which became a public company in 1936.

By the time the second world war broke out, the firm was ready to meet the heavy demands that were made upon it. It was a state that had been reached in large measure through the foresight and energy of John Craig. It was fitting that his services to the nation and to the iron and steel industry should be recognised, first, in 1918 by the award of the C.B.E., and again in 1943 when the honour of knighthood was conferred.

Another honour which he greatly prized was the award of the LL.D. degree by Glasgow University. When the second world war came to its end, Sir John did not seek the relaxation of retirement as many another of his years might have done. There was much that remained for him to accomplish. The development programmes of the iron and steel industry had to be launched, and the postwar developments of Colvilles, Ltd., were successfully under way before Sir John relinquished the responsibilities that he had so ably carried for such a long period.

In March of last year, he decided that the time was opportune for him to retire from the offices of chairman and joint managing director of Colvilles, Ltd. It was a decision that evinced regret not only throughout the organisation to the building of which he had contributed so much, but also throughout the whole of the British iron and steel industry. From boyhood to age he had served that industry devotedly.

But no account of Sir John Craig's career could be complete without some reference to his many distinguished public services. From his youth he bad always taken a great interest, and had been actively engaged in the work of the Y.M.C.A. He displayed a like interest in all aspects of industrial welfare, and a few years ago endowed the Craig War Memorial Home, at Skelmorlie, on the Firth of Clyde.

In all these public services, as in the daily concerns of his business, Sir John revealed not only ability but ready sympathy and understanding. They were traits which endeared him to the many who worked with him and were in any way associated with him during a long life that was well spent.