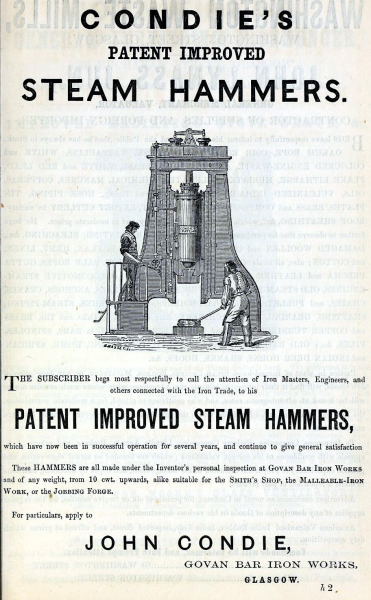 Worked at the Wilsontown Iron Works where he solved the problem of using raw coal in blast furnaces using his invention of the "spiral tuyere", which became an important part of Neilson's hot blast invention[2]

1846 Patented a type of steam hammer (Pat. No. 11,411) in which the piston was fixed and the cylinder moved. The hammer was attached to the bottom of the cylinder, and the cylinder moved in slideways attached to the standards. The patent also covered the use of iron tubes within the hammer and anvil to circulate cooling water. Steam was admitted through the hollow piston rod to the space between the top of the piston and the cylinder, raising the cylinder. Exhausting the steam (through the piston rod) allowed the cylinder and hammer to drop. Condie proposed that the hammer could be made double-acting, if required, by the compression of an air cushion under the piston. The first hammer was erected at Govan in 1848, and they were popular with a number of companies in the area, particularly the Lancefield Forge Co. At least half of their 18 steam hammers were of the Condie type, the heaviest being 7 tons. After Condie's death, the business passed to Allan C. Wylie. Wylie showed two examples at the 1862 London exhibition, made for him by John Musgrave and Sons of Bolton.[3]

Made a 6.5 ton steam hammer for Alexander Fulton of the Glasgow Forge, Scotland Street, Glasgow.[5]

Shortly before he died, John Condie transferred the steam hammer business to Bain and Wylie [6]