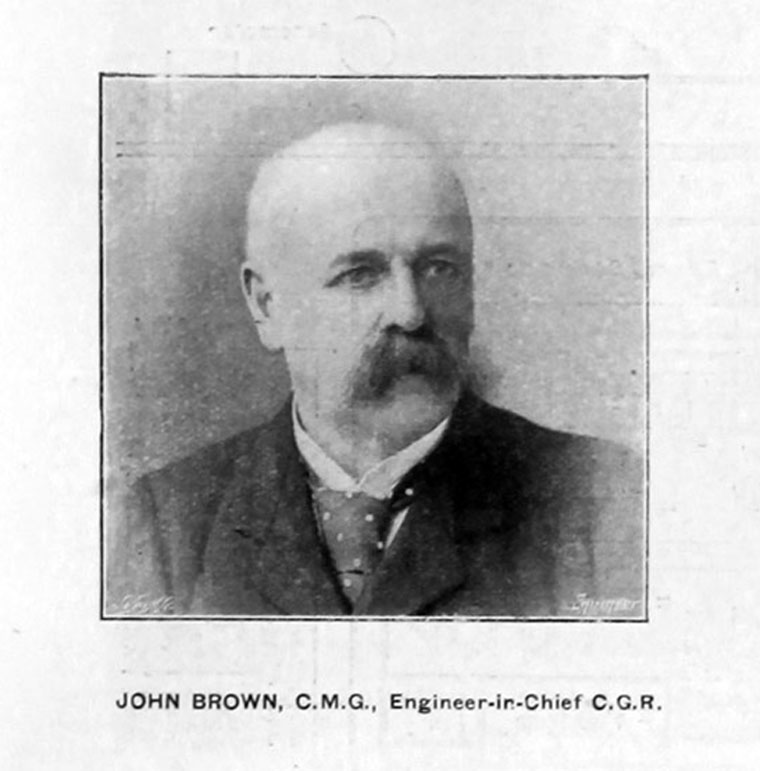 In charge of the Maintenance Department of Cape Government Railways

JOHN BROWN, formerly Engineer-in-chief of the Cape Government Railways, died at his residence, The Thatch, Rondebosch, Cape Colony, on the 11th July, 1905, aged 61.

Born at Marlborough, Wiltshire, on the 27th April, 1844, he was privately educated and served a pupilage to the late Sir John Coode, by whom he was employed on the construction of the Portland breakwater.

After serving temporarily as an assistant engineer on the Bristol and Exeter Railway, he was appointed by Sir John Coode to take charge of the improvement works then being carried out at the mouth of the River Bann, Ireland, a post which he retained until the suspension of the works in September, 1872.

In the following year, on the recommendation of his former chief, he received an appointment to the staff of the Cape Government Railways, and proceeded to South Africa. After acting as an assistant engineer for two years, he was promoted early in 1876 to the rank of District Engineer, and became Engineer-in-chief in 1884, on the retirement of Mr. H. J. Pauling. Under his able direction, the railway system of Cape Colony attained a high level of efficiency, and its capabilities were fully tested during the anxious time of the South African war. For services rendered during the war Mr. Brown received the distinction of C.M.G., and in June, 1904, on reaching the age-limit of 60 years, he was placed on pension and thereafter lived in retirement at Rondebosch until his death,