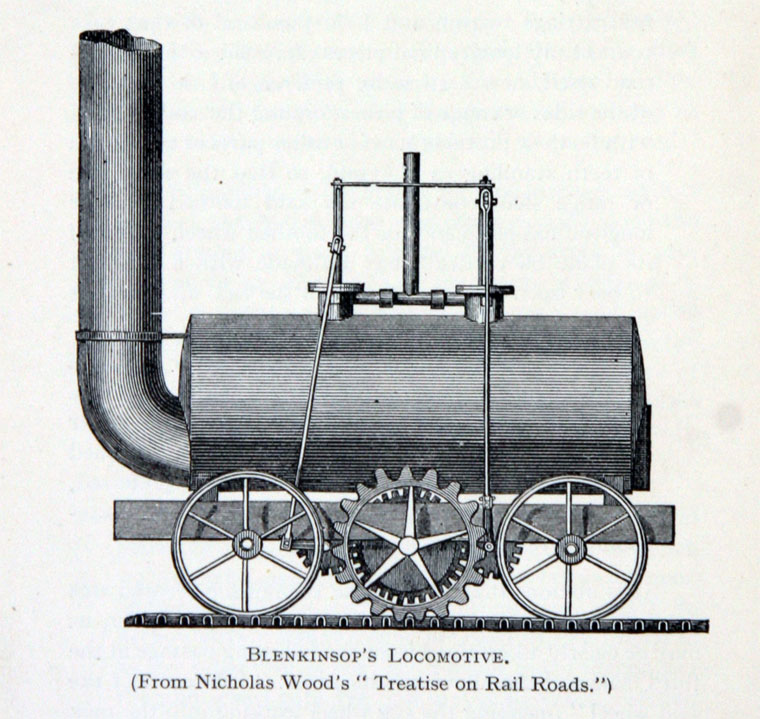 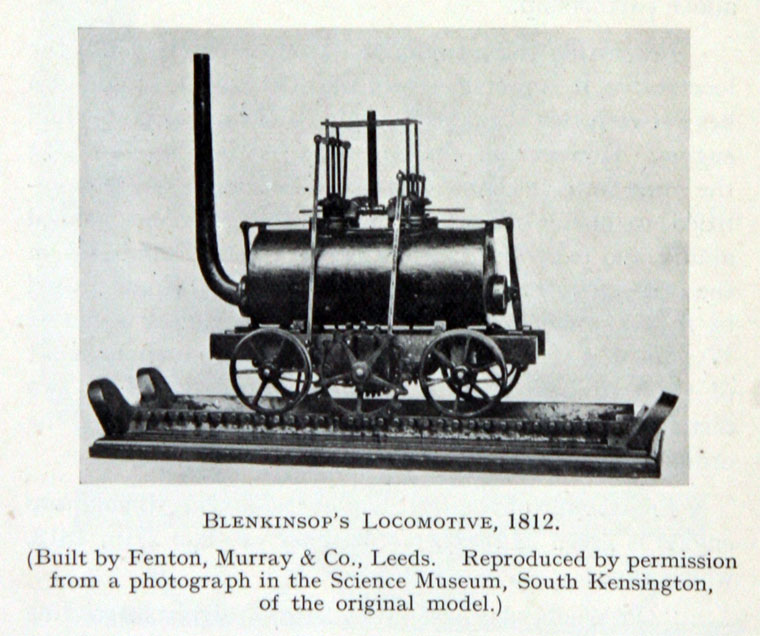 John Blenkinsop (1783-1831) was a British mining engineer and an inventor in the area of steam locomotives, who designed the first practical railway locomotive.

1783 He was born near Leeds, and was apprenticed to his cousin, Thomas Barnes, the Northumberland coal viewer.

From 1808 he became Agent to Charles John Brandling who owned the Middleton Colliery near Leeds.

1811 While many people, such as William Hedley, felt that adhesion should be adequate with a locomotive weighing around five tons, Blenkinsop was less sanguine. On 10 April 1811 he obtained a patent for a new type of locomotive, developing some of the ideas embodied in the engine constructed by Richard Trevithick in 1803, but combining with them a new plan to overcome the presumed lack of adhesion between the engine wheels and smooth rails. This was effected by means of a racked or toothed rail, laid along one side of the road, into which the toothed wheel of the locomotive worked as pinions work into a rack. The locomotive would be designed and built by Matthew Murray of Fenton, Murray and Wood.

Trevithick had begun building steam locomotives, culminating in an engine at Wylam Colliery in 1805. The plate rails were unable to take the weight, and the locos had been abandoned. However shortages of horses and fodder brought about by the Napoleonic Wars had made steam more attractive, and encouraged further development. Moreover, the new edge rails, laid at Middleton around 1807, were stronger.

Chronicled in the Local Records of John Sykes, under date 2nd September 1813: "An ingenious and highly interesting experiment was performed, in the presence of a vast concourse of spectators, on the railway leading from the collieries of Kenton and Coxlodge, near Newcastle, by the application of a steam engine, constructed by Messrs. Fenton, Murray and Wood, of Leeds, under the direction of Mr. John Blenkinsop, the patentee, for the purpose of drawing the coal waggons. About one o'clock the new invention was set agoing, having attached to it sixteen chaldron waggons loaded with coals, each waggon, with its contents, weighing four tons or thereabouts; making altogether an aggregate weight little short of seventy tons. Upon a perfectly level road, the machine so charged, it was computed, would travel at the rate of three-and-a-half miles per hour; but in the present instance its speed was short of that, owing, no doubt, to some partial ascents in the railway. Under all the circumstances, it was very highly approved of, and its complete success anticipated."

The general opinion of the time was that a locomotive would draw up to four times its weight by adhesion alone (assuming good conditions), but Blenkinsop wanted more, and his engine, weighing five tons, regularly hauled a payload of ninety tons. The first was the Salamanca, built in 1812 and three more followed: Prince Regent, Lord Willington and Marquis Wellington.

Locomotives were also built for collieries near Wigan and Newcastle-upon-Tyne. A locomotive of this pattern was also made by the Royal Iron Foundry at Berlin. They had double-acting cylinders and, unlike the Trevithick pattern, no flywheel. The cylinders drove a geared wheel which engaged under the engine with the rack. This design was quickly superseded following the discovery of the Stephensons of the adhesive principle.

Blenkinsop died in Leeds in January 1831, and is buried in Rothwell parish church.