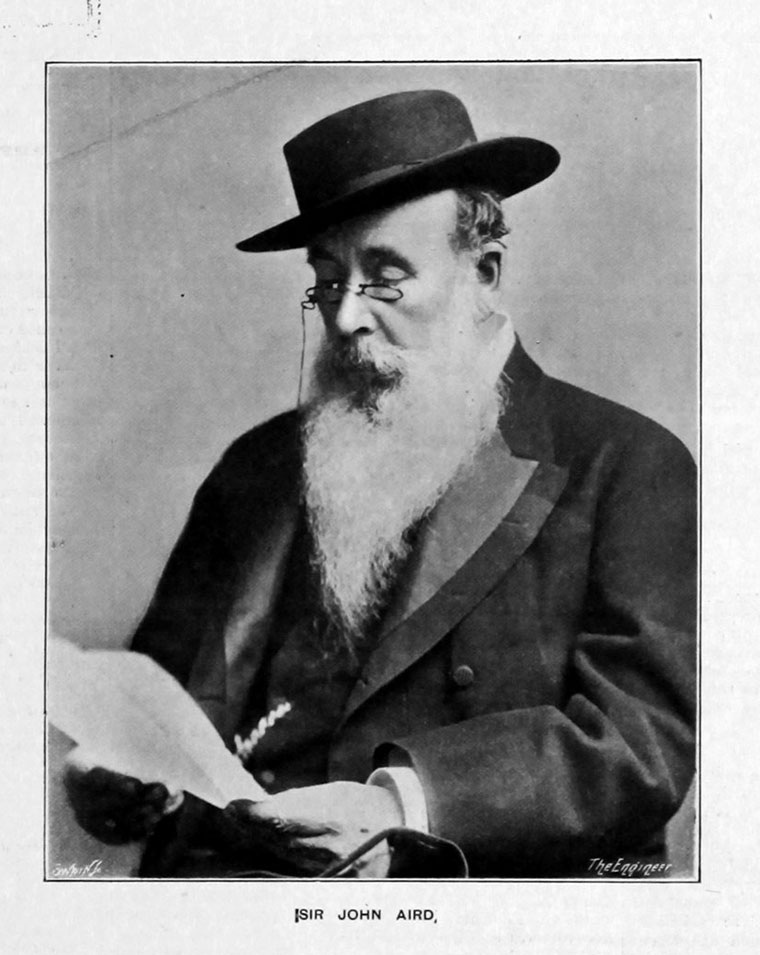 The contracting business of John Aird and Sons, the former name of the firm, covers the whole of the latter half of the last century.

John Aird was associated with his father in 1851, on reaching his eighteenth year ; he had spent the greater part of his boyhood at Greenwich, and was educated there and at Southgate.

As regards his apprenticeship in engineering, he could not have had a better schooling than the one he received in association with his father’s business. At this period, his father commenced carrying out important undertakings, among which may be mentioned work in connection with the Great Exhibition in Hyde Park.

At about the same period Messrs. Aird extended several gasworks in this country, and were the contractors for new works of the same class both in London and in the provinces. Their sphere of activity was not, however, limited to Great Britain, but extended to the Continent of Europe and to distant countries ; their name is associated with the early installation of waterworks and gasworks in Amsterdam, Berlin, and Copenhagen, and they also put down gasworks in France, Italy, and Brazil. Amongst other large works of the same nature carried out by them in connection with various contracting firms, were the Calcutta Waterworks, the Millwall Docks, and a large amount of civil engineering work in Sardinia.

John Aird, after the death of his father in 1876, entered into partnership with Lucas Brothers, the new firm being styled Lucas and Aird. The firm built various extensions of the District Railway, the Metropolitan Railway, and the St. John’s Wood Railway; the Royal Albert Docks, the Tilbury Dock, the East and West India Dock Extension, the Hull and Barnsley Railway and Dock, the West Highland Railway, besides many other new railway lines, railway-widening works, docks, water, sewage, and drainage works and railways in the provinces and in foreign countries.

The crowning work accomplished by Sir John Aird as a contractor was the construction of the Assouan Dam on the Nile, the Engineer for which was the late Sir Benjamin Baker, Past-President. The work is fully described in the Paper by Mr. M. Fitzmaurice, C.M.G., published in the Proceedings.

Preliminary operations were commenced at the site of the dam in April, 1898, and in the early summer of 1899 the number of men employed on the undertaking reached a total of 13,000. The dam has a length of about 2,200 yards; it has 180 sluice-gates, and its maximum height from the foundation is about 130 feet. The total amount of granite masonry its construction involved was about 1 million tons. The effect of the dam is to convert the River Nile above Assouan into an immense reservoir, which, when full, contains about 38,000 million cubic feet of water. Its construction took about 4 years only. The Assiut Barrage was carried out at the same time.

Among the later undertakings carried out by Sir John Aird and Company in this country may be mentioned the Royal Edward Dock at Avonmouth, which was commenced in March, 1902. The works at Avonmouth increase the deep-water area of the port by 30 acres, and reclaim from the sea a large tract of land through the tipping of the excavated material on the mud slopes of the Severn, this raising them much above the level of the sea. The firm is occupied in Egypt in raising the Assouan Dam, and have lately completed a barrage at Esneh and the Menufieh Regulator.

Sir John Aird was also well known as a connoisseur of art, and owned an admirable collection of valuable paintings, water-colours, and statuary. He was created a baronet in 1901. He was a Member of Parliament for North Paddington from 1887 to 1905. In 1900 he was elected the first Mayor for the newly-formed Borough of Paddington. He was, moreover, Commissioner of Lieutenancy of the City of London and Lieut.-Colonel of the Engineer and Railway Volunteer Staff Corps. He was also a member of the Iron and Steel Institute.

Sir JOHN AIRD died on January 6, 1911, at his residence, Wilton Park, Beaconsfield, Bucks. He was born in London on December 3, 1833, and was the son of the late Mr. John Aird, of Great Cumberland Place, London. He was educated privately at Southgate, and at an early age joined his father in business as a contractor. He was only about eighteen years old when he was entrusted with a large amount of important work in connection with the Great Exhibition of 1851, and he was associated with the transference of the Crystal Palace from Hyde Park to Sydenham. He afterwards became largely connected with the building of gas and water works in Great Britain and abroad.

In 1898 the task of damming the Nile, long recognised as necessary, was first taken in hand, and to the firm of John Aird & Company was given the contract to erect the Assuan dam and the Assiut barrage, and to complete the work in five years. At one time about 20,000 men were engaged upon it, and the scheme was completed in 1902, a year before the expiration of the period stipulated in the contract, and three and a half years after the laying of the first stone.

Sir John Aird was returned as member of Parliament in the Conservative interest for North Paddington in 1887, and held the seat until 1905. In 1906 he served on the General Reception Committee to receive the members of the American Institute of Mining Engineers on their visit to this country. He became an associate of the Institution of Civil Engineers in 1859, and a member of the Iron and Steel Institute in 1887. In 1886 he served on the Royal Commission on the Depression of Trade. He was created a baronet by Lord Salisbury in 1901.