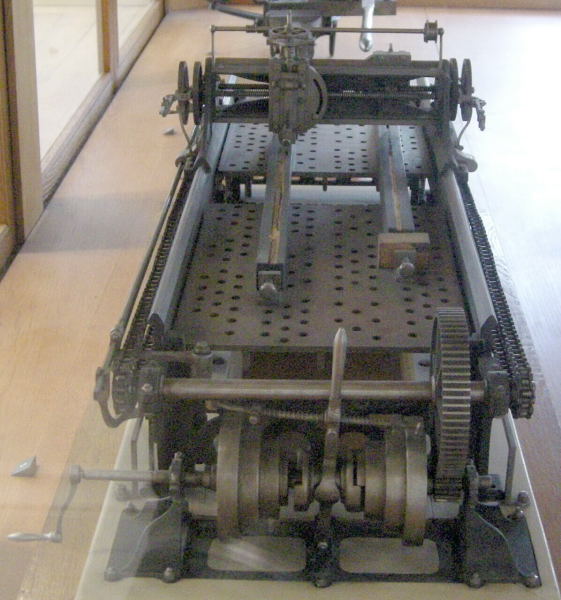 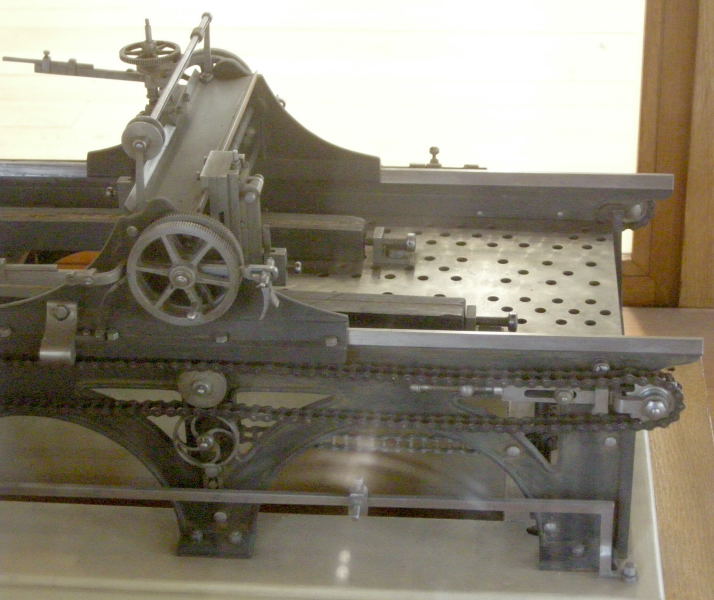 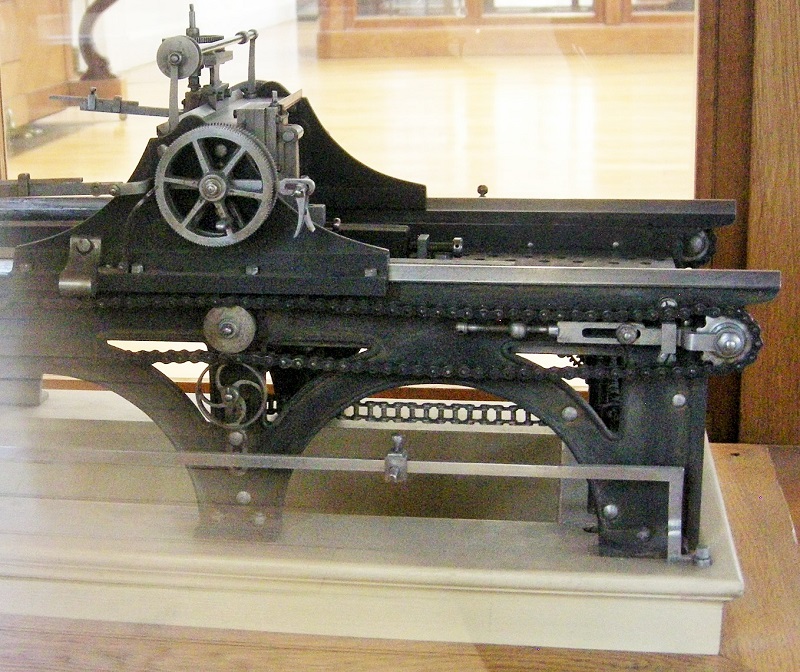 In 1834 the Saint-Gobain glassworks were faced with the difficulty of truing up the face of a cast iron glass casting plate whose surface had become extremely hard. A planing machine was needed, but none large enough existed in France. De la Morinière conceived the idea of a 'travelling standards' planing machine (Machine à raboter à fosse - pit planing machine), in which the tool would reciprocate while the heavy workpiece remained stationary in a pit, in contrast to the normal arrangement of the workpiece moving under the tool. In order to undertake the work quickly, the workpiece was mounted on low brick walls and a wooden-framed machine was constructed over it. The travelling 'bridge' which held the tool was guided by iron runners, and was reciprocated by endless chains worked by manpower.

This remained Cavé's only such planing machine in 1837 when de la Morinière had moved on to the naval construction works at Toulon. There, he decided to obtain a 9m planer for marine engineering work, and approached Cavé. However, Cavé would not adopt all de la Morinière's requirements, including the chain drive, so he went instead to M. Mariotte. Three 9m planers were ordered from Mariotte for Indret, Cherbourg and Rochefort or Lorient.

This arrangement became known in France as système français, in contrast to the type with fixed standards and moving table which became known as the système anglais. The machine at Saint-Gobain, for planing cast iron cooling tables for casting glass sheet, had a table 4 m long by 2.73 m wide.

This type of machine was favoured by a number of French machine tool makers, including Mariotte, Cavé, and Decoster. Machines in the naval arsenals could machine workpieces 9 m long, with a cutting speed of 4 m/minute.

Note: Armengaud stated in 1842 that Amédée Durand of Paris had built, 'more than 20 years ago', a planing machine with a moving tool, which still existed in his workshops. Joseph Whitworth patented a 'moving standards' planing machine in 1835. It is not known whether he produced any examples, although some key features, including his novel leadscrew drive, were adopted on his moving-table planers (but not his use of wheels for the moving standards).

A scale model of a machine of the de la Moriniere type was acquired by the Musée des Arts et Métiers in 1844[2], and remains on display in 2019. A description and photograph are available online.[3]. The model is dated by the museum at 1834, but clearly this is a little early. Since it had chain drive, rather than the gear drive favoured by Cavé, it begs the question whether this was represents a machine made by Mariotte.

The machine was located in a pit such that the slides were level with the ground. The workpiece was fixed on the static table, while the 'standards' (comprising columns, cross slide, toolholder, etc.) moved over the workpiece on inverted V-slideways. The standards were pulled back and forth by an endless pitch chain, one chain on each side of the machine.

We take pitch chains working with toothed sprockets for granted, but their use on this machine is remarkable, given the 1830s date. It begs interesting questions about the manufacture of the numerous precision links required for the chains. It might also provide one reason for Cavé not wanting to use chains. Note: Although chains with pinned flat links were commonplace (for clock fusees for example), the accuracy of pitch was not so critical.

It will be noted that there are also pitch chains beneath to two tables. Each of the two chains acts on four jacking screws to raise and lower the workpiece tables (just visible in photos 2 & 3).

There are two tool holders, allowing cutting in both directions. The tools were held in conventional 'compound slides'. On one of these the tool height could be adjusted from the side of the machine by a worm and wheel arrangement. The shaft and its worm gear are visible in photo 3 (worm disengaged). The shaft was evidently rotated by a flat belt. Although the 'compound slide' could be tilted to cut angled surfaces, the powered feed arrangement could not then be engaged.

The 'compound slides' were self-acting, being fed transversely by a ratchet-operated leadscrews. It will be seen that each leadscrew has two ratchet wheels working in opposite senses (photo 6). The operator would select one of two pawls (photo 7) to determine the direction of travel. The method of actuating the ratchet pawls is not evident.

Photo 4 shows the pulleys which drove the machine. The power came from a pair of flat leather belts running in opposite directions. The principle was well-established of having a striker to slide a clutch member to engage the forward or reverse drive. The use of a dog clutch is less objectionable on this type of machine than on the moving table type carrying a heavy workpiece, because of the limited inertia of the moving mass.