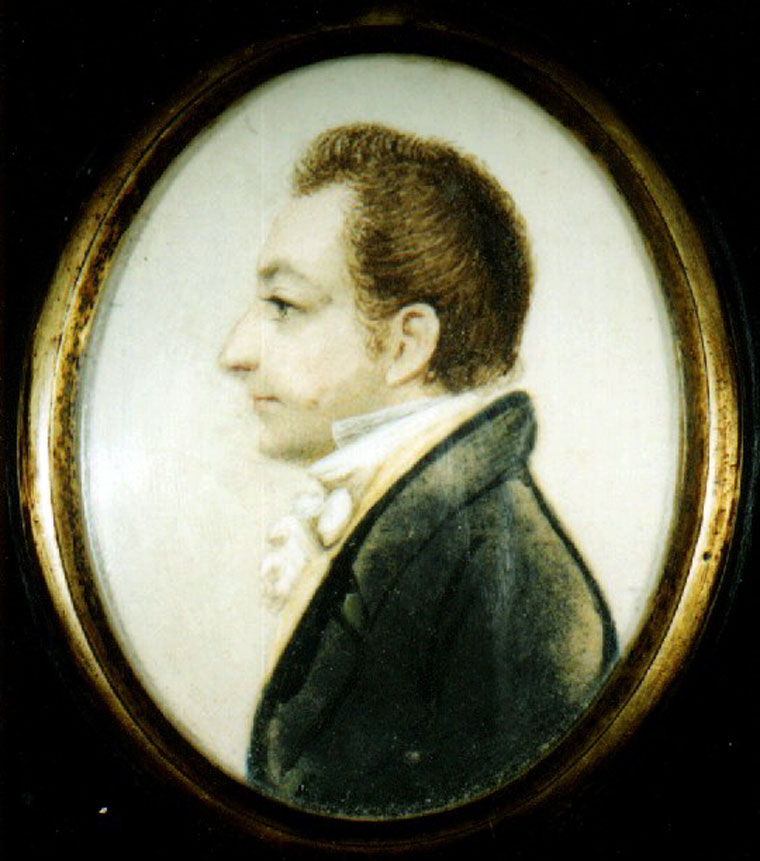 1782 July 10th. Born and baptised the next day in Nancy, France, the son of Baron Antoine Andre Chappé and Françoise, the daughter of Jean-Baptiste de Collancy. His baptismal entry in the parish record reads “Jean Baptiste Paul, legitimate son of Antoine Andre Chappé, advocate at Parliament, Master of Horse, Councillor and Secretary to the King, House and Crown of France in the Chancellery established at the Parliament at Metz, and Dame Françoise Horiot de Collancy, was born at half past six in the evening on the 10th July, 1782, and baptised the next day. He has for Godfather Mr. Jean Baptiste Laffitte, Doctor and Surgeon, represented by Louis Aubry, servant to Mr. Chappé, and for Godmother Dame Jeanne Marguerite Sophie Enciote, wife of Mr. Pierre Louis Sirejean, advocate at Parliament, represented by Francoise Bidot, also a servant to Mr. Chappé. The which have made their mark, not being able to write.”

His godfather was later going to marry his mother, so becoming his step father.

During the French Revolution his father escaped to their sugar estates in San Domingo with his older sisters, where they were later killed in the slave up-rising of 1794. Meanwhile, aided by Dr Lafitte, his mother fled with him and his youngest sister through the Spanish Netherlands to England, where they possibly came to Manchester. After the Revolution his mother returned to Nancy, where she opened an Academy for young ladies with his sister, and he entered a seminary. The priesthood did not appeal, and so he returned to England in May 1803, when he was 21 years old. He spent the first three years in London, and then moved up to Manchester.

He himself continued to use his full patronymic of Chappé de Leonval even late in his life, when he had given up any claim to the titles of his father.

By 1808 the directories record that he was a merchant and manufacturer at St. James’ Street, and by 1811 he was in Red Cross Street. In 1809, when he married, his residence was given as “The White Cottage”, Pendleton.

By 1814 he had joined the Fletcher family firm, which was Peter Fletcher and Sons, merchants at 14, Police Street (Commercial Directory 1818-20) and spinners at the Gaythorne Mill in Medlock Street.

In 1817 he was a commission agent at 7, Back Square, but in the same year he became involved in the cotton trade. He patented a six-cord doubling frame (which has been shown in the Manchester Science Museum), and later a recycle steam boiler to reduce pollution.

On 9th December 1825 he took British citizenship; this was followed by full naturalisation on 14th May 1829

In 1829, at the time of his application for naturalisation, he was seeking to purchase the Gaythorn Mill. The application names his partner as Charles Fletcher, recently deceased – between October 1828 when they started to purchase the mill, and 26th February 1829, the date of the application. Paul was paying £3,000 for the mill.

In a document dated 2nd August 1839 on vellum, measuring 18.25 inches long by 23.75 inches wide, between John Baptiste Paul Chappé, John Higson and The Right Honourable James Earl of Balcarres, he leased for a year a plot of land together with all the Steam Engines, Steam Houses, Boilers, Boiler Houses, Shafts, Mill graining machinery and fixtures situated and lying near Knott Mill in Manchester in the County of Lancashire. It retains the revenue stamp together with two wax seals and signatures of Chappé and Higson

In 1840 the business went under (were the labour problems contributory to his financial difficulties?) and he was made personally bankrupt (notice in the London Gazette page 2464 quoting 12th February, and the Times of 19th February, page 4, column e). His assets, consisting of household goods, material in the process of manufacture, and machinery were sold in favour of his creditors for £2,156.

1840 Advert: 'Exempt from Duty.— Valuable Land, Cotton Mills, and Property, situate near to Knot Mill, in Manchester, on the northerly side of the River Medlock.
Mr. FISHER, by order of the assignee and mortgagees of Jean Baptiste Paul Chappe, of Manchester aforesaid, cotton spinner and cotton thread manufacturer, a bankrupt, at the Clarence Hotel, Spring Gardens, on Monday, the 23rd day of March instant at six o'clock in the evening, subject to such conditions as will be then produced:
ALL that PLOT of LAND situate at Gaythorn, near Knot Mill, Manchester aforesaid containing in the whole 2,600 superficial square yards, or thereabouts, bounded on the northerly end thereof by and including the whole of a private street, or road, of eight yards wide : on the easterly side thereof in part by land and buildings, now or late belonging to Mr. Leake, and in other part by and extending half-way into the River Tib ; on the southerly side thereof in part by the said river Tib, and in other part and extending half-way into the river Medlock ; and on the westerly side by Albion-street, together with the buildings thereon erected, consisting of the old mill, five stories high, exclusive of attics, 146 feet long, by 25 feet six inches wide, the middle mill, four stories, 97 feet by 31 feet ; the new mill, 65 feet by 33 feet three inches, gasing room, 33 feet by 12 feet ; bobbin turning shop, 34 feet by nine feet; bobbin turning shop and smithy, 44 feet by 16 feet, stable, 31 feet nine inches by 17 feet ; and lodge, 16 feet six inches by 12 feet four inches ; and also two steam engines, one of 20-horse power, by Sherratt, the other of six-horse power, by Galloway and Co ; two steam boilers, one 20-horse, the other 16, with the machinery and apparatus thereto belonging. The property is freehold of inheritance, and subject to the yearly chief or ground rent of £28 19s. 6d.
The buildings are substantial, and in good repair ; and the property will be found well worth the attention of capitalists, as well as of manufacturers, it is situated in a populous and valuable neighbourhood. For further particulars apply to the Auctioneer, Newall's Buildings ; to Messrs. J. Manning and Son, Solicitors, Dyer's Buildings, Holborn, London; to Mr. Gaskel, Solicitor, Wigan; and to Messrs. HIGSON and SON, Solicitors, Cross-street. Manchester.' [2]